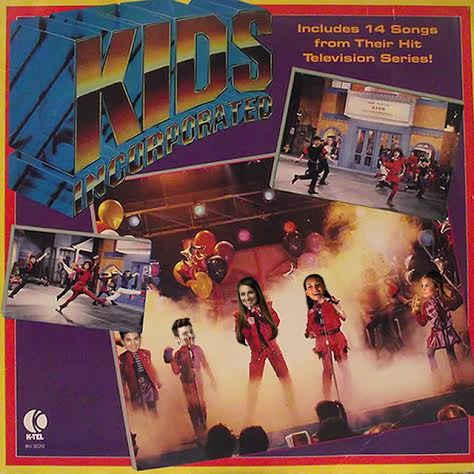 So, this week was the Billy Joel episode. I don’t dislike Billy Joel, but Billy Joel is not a good choice for Glee because Billy Joel is SO CORNY. Glee, meanwhile, is SO CHEESEY. Who wants to eat a cob of corn slathered in cheese? Nobody. Except maybe BILLY FUCKING JOEL, otherwise known as “The Cheesecake Factory.” Who directed this episode? Mr. Dress-Up?

Anyhow, this’ll be a little briefer than usual ’cause I don’t care about any of the storylines that were in this episode I’m sorry.

We open in McKinley High School For The Super-Special, where Sue’s set up a Career Fair so the students can decide whether they wanna work at The Cracker Barrel or at Dunder-Mifflin. Sir William’s upset that there is not enough representation of “careers in the arts” and I’m upset that Sir William hasn’t been condoned to whatever circle of hell involves spending eternity on an overcrowded Greyhound bus to nowhere. 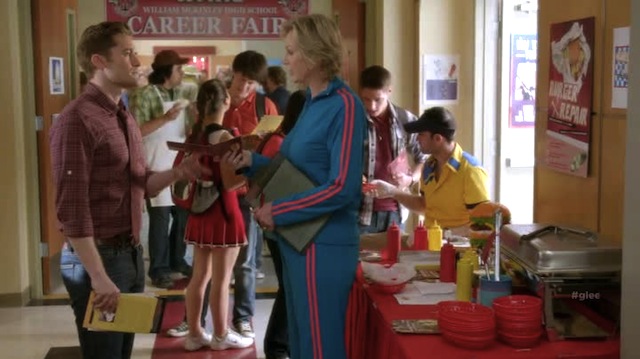 here, it’s a plane ticket to Bumblefuck, a quaint little town in the North Pole where you can think about your life and your choices and we can sit here and do ani difranco covers in peace

Sir William, determined to show his young charges the viability of a “career in the arts,” has hatched what’ll surely be a bang-up plan to thematically beat this poor dead pony, announcing that “this week’s assignment is about a goofy-looking kid who struggled for years in the music business.” 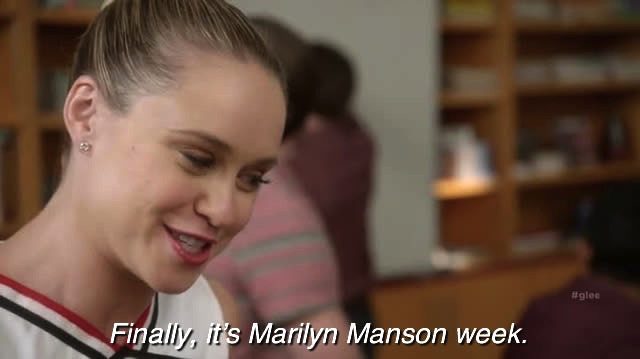 “Close,” Sir William says, whiteboard marker clutched and poised to scrawl. “Billy Joel!” Apparently, our dear straight white male Billy Joel faced intense adversity while pursuing his career in the arts. For example, he wrote songs nobody liked and worked back-t0-back fourteen hour shifts bussing tables at seedy bars for minimum wage to pay the rent. JUST KIDDING he had to play piano in seedy bars just to pay the rent. That must have been really awful. I bet one or two of the kids in this room can totally relate. 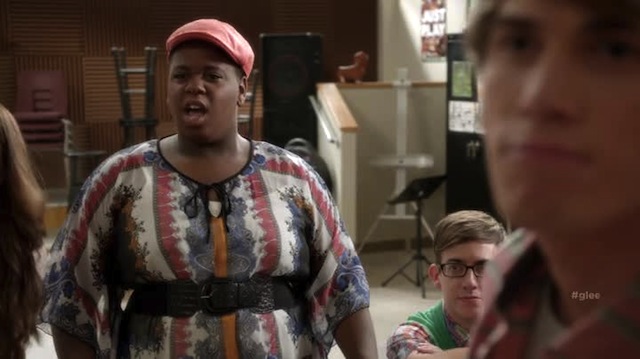 hey dude i asked you just last week to get me the hell out of this show and now you’re gonna make me listen to these yahoos sing “River of Dreams” all week?

Blaine and Sam are heading out to New York, New York, for Blaine’s big audition at Fake Julliard and Sam’s big interview with Hunter College for their prestigious former-stripper scholarship, and thus the dynamic duo launch into Billy Joel’s classic tune “Movin’ Out” which segues into their arrival in New York. They immediately board a city bus, don’t pay any fare, and totally ruin this guy’s day: 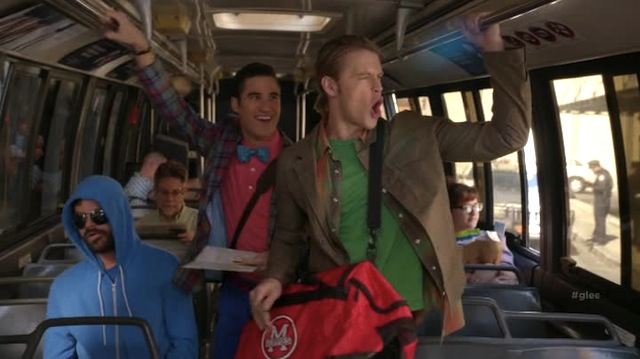 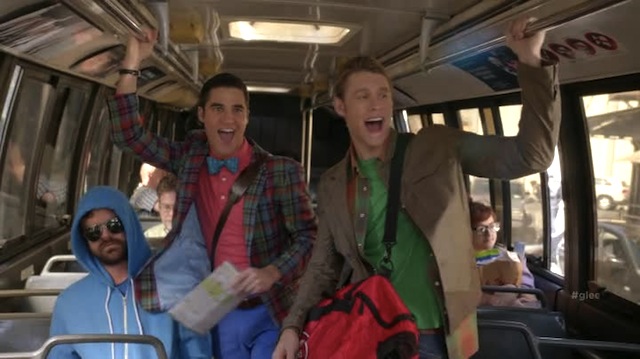 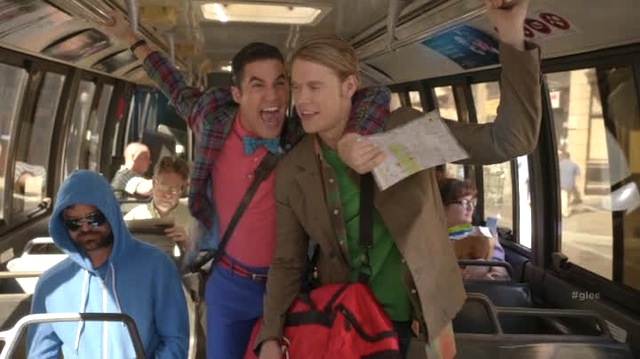 My notes on this scene:

why does Santana have a big sock on her head 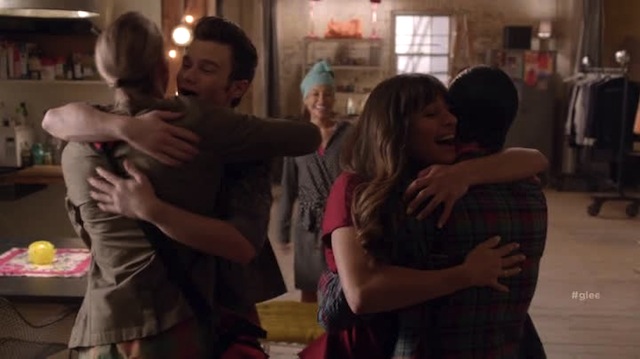 we’re so glad you’re here, we were just about to get the orgie started!

We then smash our legs into transparent panty-hose, smush our feet into undersized figure skates, envelop our bodies in latex and speed-skate all the way back to Lima, Ohio, where THANK YEEZUS a man has arrived to fix a woman’s life for her: it’s Artie, and he thinks Becky should go to college! 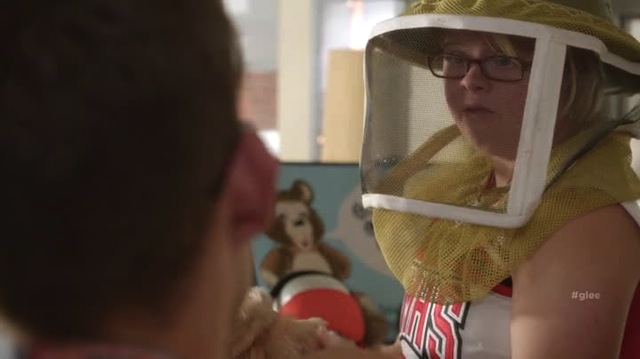 listen, this mask is the only protection i have from the spittle your little glee club ejects when they start randomly singing without warning in the godforsaken hallway

Sue kindly implores Artie to mind his own business. Meanwhile New Puck’s terrorized Marley’s locker with a shit-ton of roses, but she’s like whatever, roses. He begs her to let him apologize for doing the four-legged frolic with New Santana and make it up to her. Probably with more flowers. She’s like, what’s the point, you are who you are and I can’t change that. Then a giant anvil falls from space and kills them both and also William Schuster. Oh wait, no, sorry, that’s just what I wished happened. 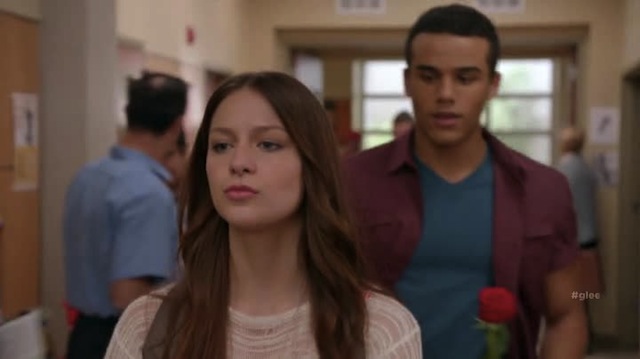 sorry dude, i’ve got a 2 o’clock appointment with that hot lesbian from drama club and this vulva is on fire

We then steal 87 spork packets from Kentucky Fried Chicken and employ said sporks to dig ourselves an enormous cross-country tunnel and then we shave our heads, slather our muscled bodies in grapeseed oil and slither all the way back to New York, New York, where Rachel’s telling Santana that she’s continuing to work at Fake Eileen’s Stardust Diner because Fanny Brice had a job. 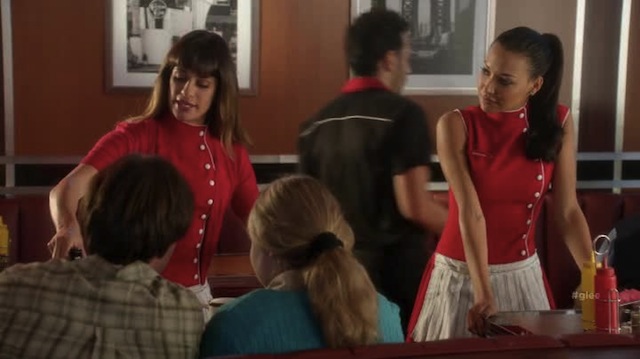 what, sometimes quinn sends me a sext and sometimes i sext her back. what’s the big deal?

Then Blaine and Sam drop in after a leisurely morning of buttsex and college visits, the latter of which shocks Kurt because why would Blaine visit Columbia and NYU as “safety schools” when he’s so obviously gonna get in to Fake Julliard? More importantly, who the fuck applies to Columbia as a safety school? 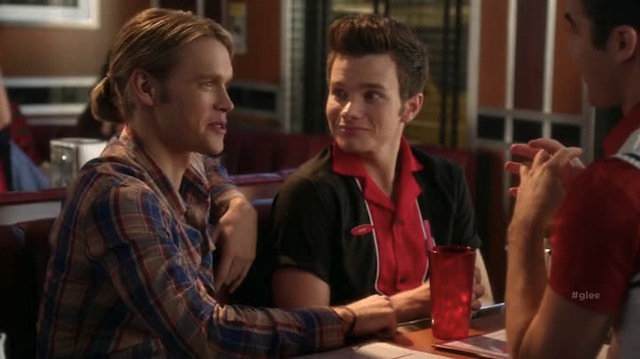 i dunno, i was just like, well, i’ve never had anything up my ass before, i’m in new york for the first time, why not?

He should apply for a degree in Hamburgerology, like the one my Mom has, because she was a McDonald’s manager while pregnant with me which’s why french fries are my favorite food. Aren’t you glad that you know this about me now? I feel so much closer to all of you! I also like ice cream and dairy products in general and cashews. Now we’re best friends. 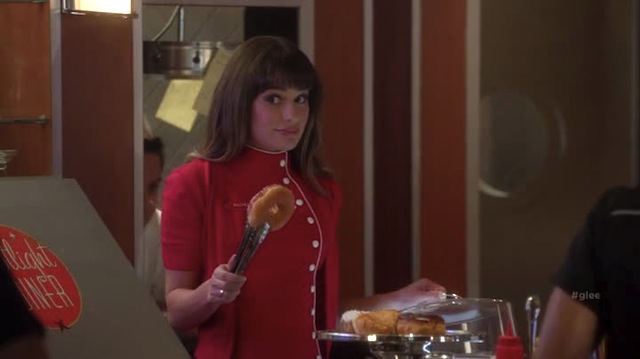 who wants a cock ring guaranteed to give you a killer yeast infection?

Thus we segue into “Piano Man,” performed by Blaine and accented by an enormous waitstaff spinning around with candles from the dollar-store, which’s a fire hazard. 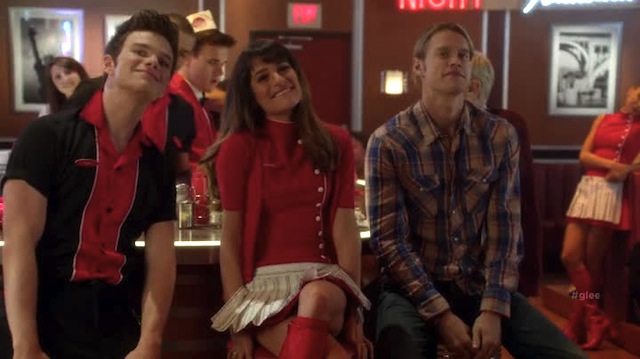 aaahhhh fuck i think i just got my period

Seriously, how many rounds of Fake Julliard auditions and conversations must we endure in this show? WHEN WILL IT END LORD HAVE MERCY

We then shake and shimmy our way back to Lima, Ohio, where Artie’s taken it upon himself to research colleges with programs for students with Downs Syndrome for Becky, because students at McKinley are 100% incapable of making post-secondary school related decisions and they all require distant acquaintances to aggressively rescue them from their delusional apathy towards higher education.

Artie: “I want you to know that you have choices, and I’m not gonna give up on you.”
Becky: “I know I have choices. My choices is none of your business, Artie! I don’t want to go to college, and I don’t want your stupid pamphlets! Butt out!”

Becky’s assertion that Artie ought to butt out is bad news for Becky, because Artie is a man and men know everything. It’s Murphy’s Law. You know — Ryan Murphy’s law. 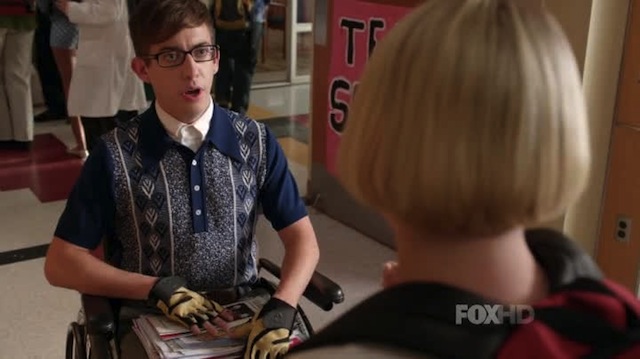 Meanwhile in the weight room, Ryder’s gotten bored cruising for steam-room hookups and has decided to pick on New Puck for screwing up his relationship with “the best thing in [his] life,” and he’s not talking about french fries or dairy products… he’s talking about Marley-Kate. 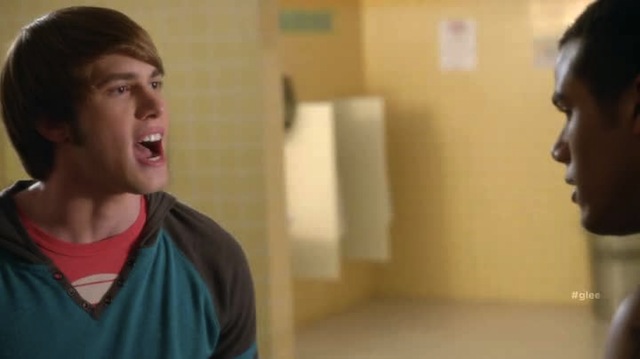 see? no junior mints. not one. i’d never steal from you, brah.

New Puck explains that the Gleeks are always hyping the value of being yourself, and thus he’s decided to be himself, and himself is a douchebag with a wild hunger for nubile young ladies. How better to express this glorious emotion than via the Billy Joel hit “My Life”? Besides, of course, running into traffic. 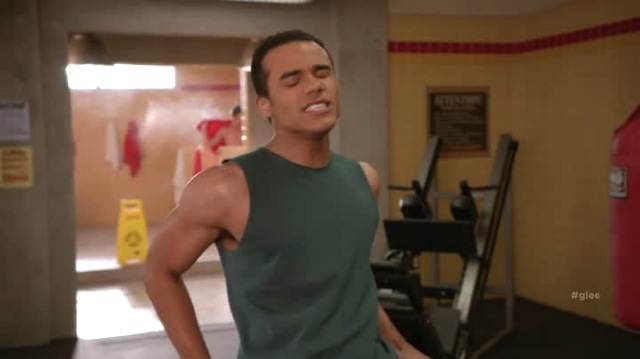 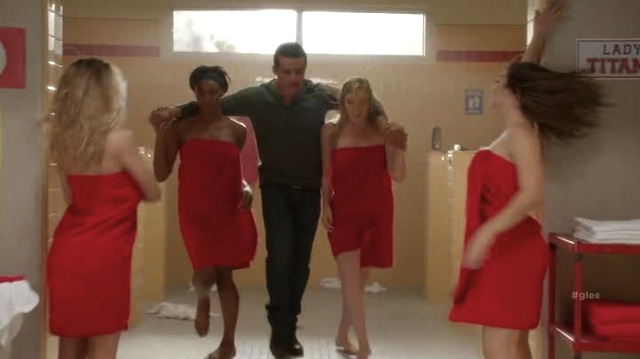 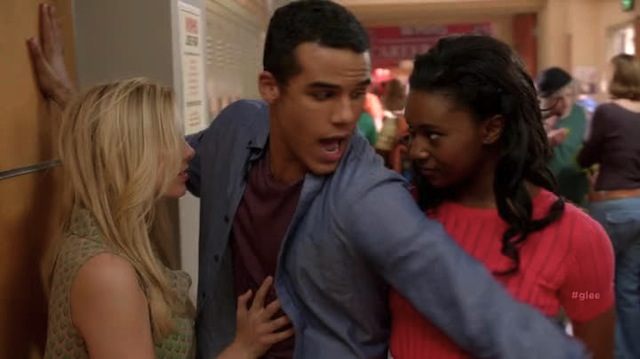 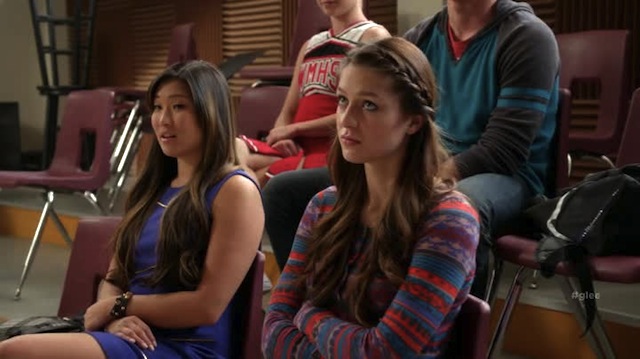 We then hop on craigslist, snag ourselves a sweet rideshare with a chain-pot-smoking teenager and his 23-year-old girlfriend who sells hollowed-out rocks on etsy and smells like ground beef and we breathe through our mouth all the way through to New York, New York, where Sam Evans is interviewing for a scholarship at Hunter College. Still I can’t hear “Hunter College” without thinking “68th street stop.” 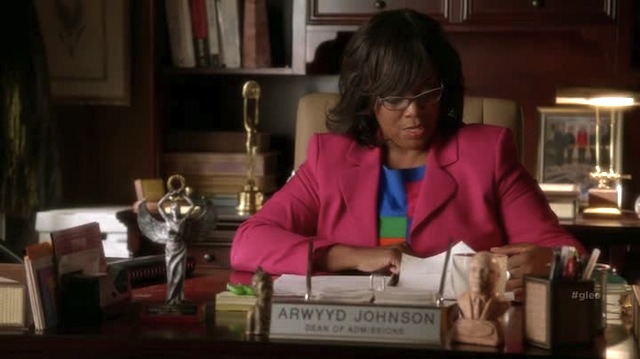 i see here that you were very unpopular with brittana shippers — can you tell me a little bit more about that?

Sam’s interviewer notes that his grades have really taken a turn for the impressive this year:

Sam: Yeah I had a breakthrough a few months ago, ’cause I’m not like a good student, but I realize that what I’m really good at is impressions, so I started to do this impression of a good high school student, and it’s kinda working.

That’s exactly how I feel about being a businessperson — I’m a better actress than a business person, so I do best when I treat networking events and conferences like Living Theater. 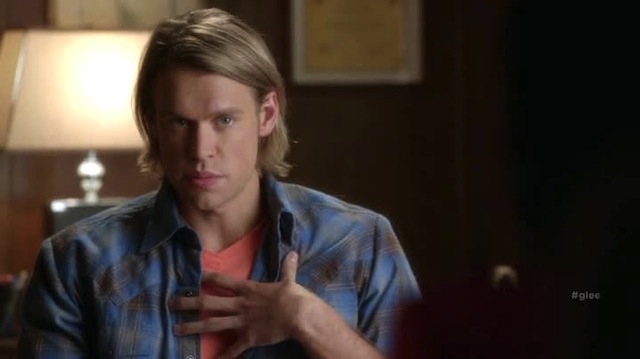 who, me? gay? no, it’s just blaine. i’m just gay for blaine. and mostly we just cuddle.

Anyhoo, when asked why he’s interested in Hunter, Sam cites the promising girl to boy ratio because he’s “totally into feminist issues” and the excitement of living in New York City. There is an awkward pause, and then:

Sam: “So you’re uh, you’re black… that must be interesting. Do you know uh, this is a shot in the dark but.. do you know Mercedes Jones?”

And thus concludes the interview.