Welcome to the  fifty-fifth installment of  Queer Your Tech with Fun, Autostraddle’s nerdy tech column. Not everything we cover will be queer per se, but it will be about customizing this awesome technology you’ve got. Having it our way, expressing our appy selves just like we do with our identities. Here we can talk about anything from app recommendations to choosing a wireless printer to web sites you have to favorite to any other fun shit we can do with technology.

Today we have, not just one, but two guest columnists. Please give a warm round of virtual applause for Fikri and Natalie!

My partner and I live far away enough from each other to make seeing each other more than a couple of times a year difficult, but not far away enough to stop me from hassling her into playing Scrabble with me. Yay, technology! Now we know we’re not the only queermos in this boat – I see you, people who hooked up at A-Camp despite knowing one of you lives in Nova Scotia and the other in Texas – so we’ve tried out a bunch of iOS games that you can play with your human even while 11,000 km apart. Or, y’know, in the same room but just feeling like communicating through iDevice screens. That’s okay too. I won’t judge.

I grew up playing with games on loads of different consoles and play them obsessively; Natalie, on the other hand, is so much the opposite that she felt the need to mention on her OkC profile that she “[doesn’t] really play games.” I’m also really competitive while she’s not. Here we’ll review games not only for their two-player capabilities but also how we felt about them individually, so you get a feel for what it’s like for players of different levels of experience and who enjoy different kinds of games. 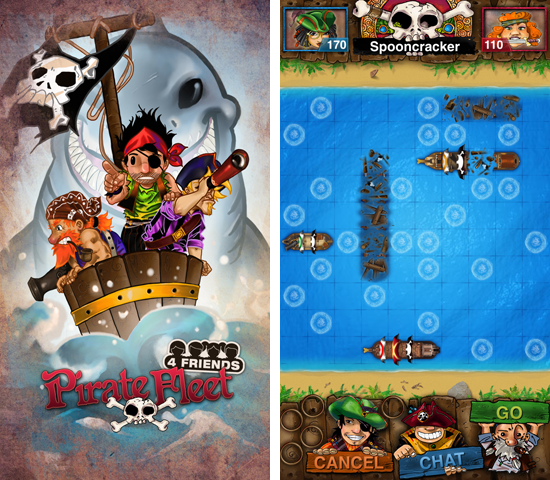 “4 Friends” with four figures geddit geddit – yeah okay the name of this game really annoys me too.

How the Game Works: Just like the game Battleship, each of you takes turns to guess where your opponent’s ships are and shoot cannonballs to sink them.

If you like Battleship, you’ll like this. I don’t really, though I’ve always liked pushing the tiny plastic ships/pins into the grid, and clearly you can’t do that with the mobile app. It’s a straightforward turn-based game but the animations (and ads, in the free version) make gameplay a bit too slow to hold my attention for long, especially when you’re in that final stretch looking for that one annoying two-bit ship.

Automating Battleship seems efficient but it also removes the fun of trying to peer at your opponent’s face and guess if your strike was close. The app was very draggy and I guess I don’t particularly enjoy feeling like a warlord with a weirdly immobile fleet. I hid that two-bit ship well though. 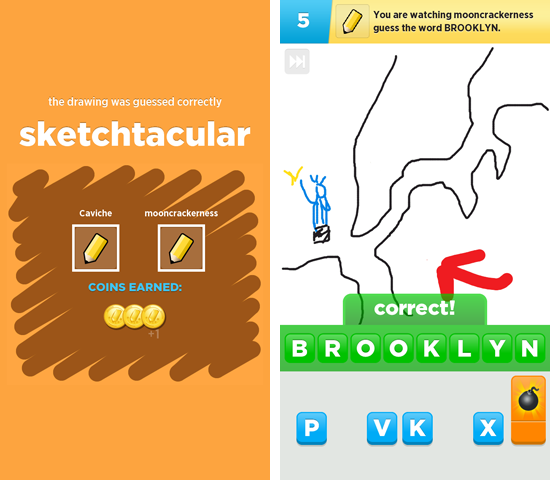 I am the worst at drawing and Nat is terrible at maps, but STILL LOOK AT THE MAGIC WE MADE HAPPEN!

How the Game Works: You pick a word from a list of three (of varying difficulties, from “mouse” to “Jonas”), draw that thing, and your partner guesses it. Both of you continue to earn coins (used to get more in-game add-ons) as long as you keep guessing correctly.

This game stopped being popular two years ago or something but it’s still a great game! Playing with your partner makes for much hilarity (sometimes judgeyness) and is way better than starting games with strangers who’ll never respond or who just write out the word you’re supposed to be guessing.

This game is a little more amusing when done with background commentary (we played it while on a Skype videocall). Since Fik is not great at drawing, it was less ill-matched than the other games, although her opening shot was cool because it involved near-consonance. [F: I drew a plunger for “plumber,” and I totally didn’t think anything of it but apparently this impresses ladies. Well this one at least.] 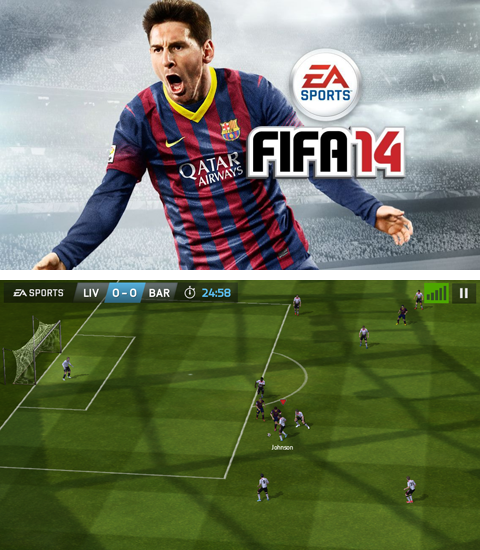 How the Game Works: You play football with your fingers! The game matches involve real-life teams and players, none of which either of us are familiar with. The two-player mode allows you to play at the same time over wi-fi, which is a nice change from turn-based games, but also requires that you both have stable internet connections for a graphics-heavy game.

Not only does this game only feature all-male teams, it also uses male pronouns to refer to you/your friends. The two-player online friendly mode was really buggy (one of us could invite the other but then the invitation could not be accepted) and I’m not really a fan of the gameplay so I’m giving this a pass. (This review is probably very biased because I don’t like real football, though I liked that the iOS version addresses what I consider the sport’s biggest weakness: matches no longer take 1.5 hours.)

I neither got past the beginner level nor played matches longer than four minutes in total, but I feel that this game is the closest I will get to playing sports in my life. The basics were easy to pick up and I enjoyed the illusion of athletic ability, but as a moderate WoSo fan I feel the lost opportunity for women football players keenly. After a while it was not very fun being good at virtual football on my own, and so much of the football was lost on me. Since this is FIFA, it uses information from real football worlds, so if you’re into men’s football you might like it. You can download real match data and everything to pretend to control your favourite team with your fingers. 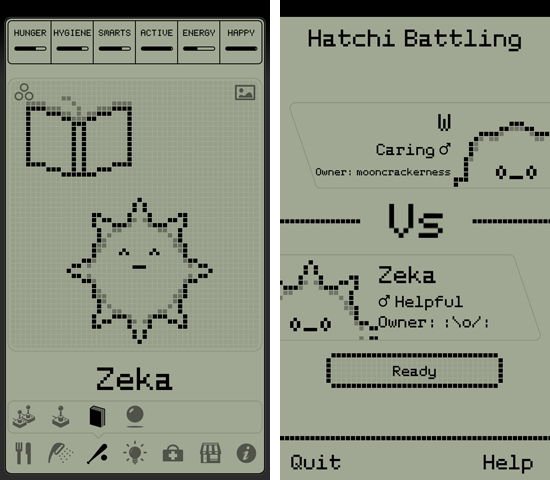 Both our Hatchis hate apples, and are thus abominations upon this earth.

How the Game Works: You care for and raise a virtual pet by feeding, cleaning and playing with it. The app also contains mini-games like Hatchi Squares (tic-tac-toe) and Roshambo (scissors-paper-stone). Battle mode pits you against another person’s Hatchi by tapping your way through three mini-games, with some bizarre fireball collision sequence (based on who tapped things better?) at the end determining who wins.

Hatchi isn’t much of a game at all but I chose it out of some vague nostalgia for Tamagotchi. It’s not particularly engaging and the two-player mode was slightly glitchy (Nat could initiate battles but I couldn’t), but I can see myself being entertained by this for a while yet.

I’m going to admit that I did not like the idea of making a pet to get attached to just so that Fik could battle it. But then I made two Hatchis and got weirdly into it all, whining about having to maintain them, caring that they evolved, and playing the super mindless single-player games. Battling is the weirdest (pared down graphics reveal how trivially difficult it is to win), but I liked the nostalgic aesthetic. 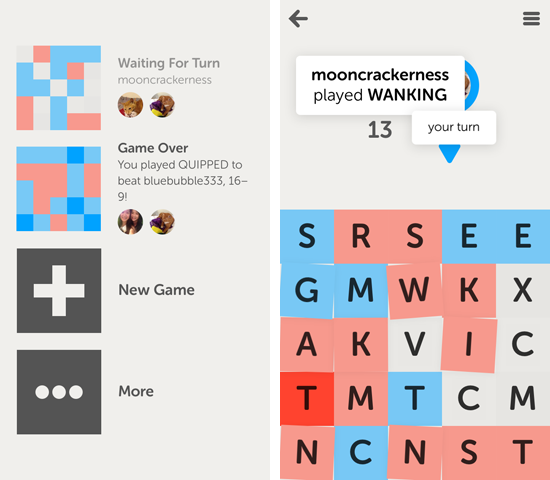 Yes our Game Center photos are of our cats, which is possibly gayer than couple photos.

How the Game Works: In a two-player set-up, your aim is to make as many words as possible in a 5×5 grid. You claim letters by using them and the game ends when either all the letters have been claimed or neither of you is able to make a word for two turns, after which whoever has the most letters wins.

I really like the idea and design of this game. It’s an interesting take on competitive word games and is native to the digital medium, unlike most other games we tried that were adapted from physical games, and we didn’t encounter a single problem while playing it. It’s great especially for when you don’t have a lot of time. I’m giving it just a bit less than a perfect score because it’s a bit hard to get the hang of at first and it’s more about strategy than words, which isn’t a flaw in itself but I’m a word games snob.

I like words, and I like how this game doesn’t have that many rules to restrict me from making words, but is still challenging depending on what the board looks like. I thought the concept was clever, if a little hard to master for the truly uncompetitive (e.g. me), and it lasted just long enough to feel like a substantial game without it getting draggy. If the board is easy you could challenge each other to themed words. Clearly this is a budding talent of mine.