So last week the Feminist Cyber-Wars were fought and nobody won. Well, that’s not entirely true: Jezebel won a little bit, though apparently they’ve been winning for some time now. As reported in a piece in Sunday’s New York Times (which officially marked the end of said cyber-war because The Times is always at least three weeks behind on trend pieces), Jezebel is sort of running things:

Jezebel began in 2007 as a postfeminist companion to Gawker.com, the New York media insider blog, and in some ways has eclipsed its sibling, capturing an impassioned female audience and recently surpassing Gawker in monthly page views….. Jezebel’s audience is 97 percent female, and the site says it gets more than 37 million page views a month and about 200,000 unique visitors each day. Jezebel’s approach seems to be paying off. Advertising Age has called the blog “one of the few genuinely intelligent repositories of media/marketing/fashion commentary/celebrity deflation.”

If you know anything about women in the media business or the herstory of feminism, that’s a HUGE DEAL. Some might argue that Jezebel has done more for feminism in the past five years than just about anything else: it’s popularized feminist discourse, made it profitable, and above all — Jezebel has made feminism cool. (And it’s also served to introduce people to excellent feminist publications that have existed for a bit longer, such as bitch Magazine.) And they’ve done all this under the umbrella of Gawker Media owned by Nick Denton, who has serious sexist-prick tendencies.

But before we get into that, let’s run down what’s been happening the last few weeks in case you somehow managed to miss it all, you lucky bitches. 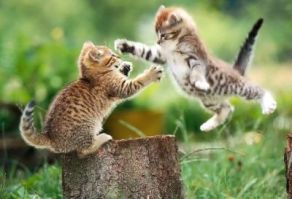 The battles that eventually inspired the glowing Times piece (their second such report on Jezebel) began on June 23rd, when Irin Carmon at Jezebel indicted The Daily Show on charges of sexism in “The Daily Show’s Woman Problem,” calling the liberal show “a boys’ club where women’s contributions are often ignored and dismissed.” Despite its liberal leanings, Carmon observes, Samantha Bee is The Daily Show‘s only female correspondent ever and furthermore, Olivia Munn, poised to become the second, is a poor choice as she’s “better known for suggestively putting things in her mouth on a video game show and being on the covers of Playboy and Maxim than for her comedic chops.”

About a week later, during a little on-air litany about stress, Jon Stewart said “Jezebel thinks I’m a sexist prick.” Olivia Munn hit back at Carmon, and the Women of the Daily Show refuted Jezebel’s accusations–a letter later ingeniusly parodied by Sady Doyle—proclaiming their eternal love for J-Stew.

Then Amanda Hess reminded us that feminism is for bitches, too. And THEN Emily Gould criticized Jezebel’s initial motivations altogether in her Slate.com piece, How Feminist Blogs Like Jezebel Gin Up Page Views. Further responses to both Gould’s accusations and the alleged sexism on The Daily Show piled in from sources including Feministe, The Awl, Mikkipedia, New York Magazine and eventually even The New York Times. Jezebel responded to Emily Gould’s piece and Emily Gould, in turn, responded to Jezebel.

The Great Feminists of the Internet jockeyed back and forth on twitter and, at some point, former Gawker editor Emily Gould and former Jezbel Editor-in-Chief and present contributor Anna Holmes shared a meal. Perhaps a few eyes wandered back to a June 22nd Tiger Beatdown piece on Internet Feminism that said it all before everything even started. 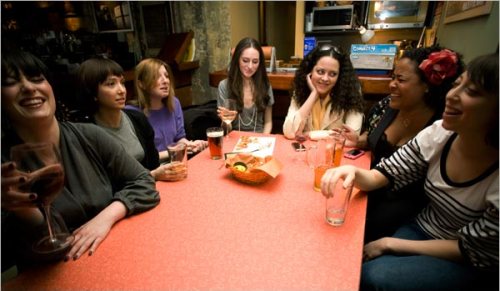 We’ve read all these pieces and can’t necessarily discern who’s right, wrong, jealous, or just in it for the money/page views. We don’t, however, think that’s actually the point every time. Sometimes the appearance of an “end” is necessary to enable the means — as confusing, frustrating or fruitless as that sometimes might feel. Is The Daily Show sexist? Does Jezebel “gin up” page views by fueling “jealousy”? There’s no definitive answer and the issues themselves are complicated, although hyperbolic headlines beg for such things. The conversation is the point.

The inevitable repercussions of a 24/7 news-cycle and SEO-driven reporting have been the source of much web-wide hand-wringing for the last few years. Melodramatic titles, flame-war-stoking, controversy-stirring and misreporting have become par for the course. The public pays the price when we consume bad information or get sucked into warring with trolls all afternoon.

The most important thing to take away from all this, in our humble young feminist/queer website’s opinion, is that the internet doesn’t provide you with a thesis every day. Sometimes there’s not enough evidence to make a point, and sometimes nobody can figure out how to steer a conversation in a productive direction with all egos and jealousy in check.

The moral of the story is that we’re all still figuring it out. And in the meantime, people are saying some really interesting things about Doing Feminism Online. We don’t agree with all of them, but these are ideas worth thinking about.

10. Shelby Knox, When Feminists Attack Other Feminists Online for Page Views, on the importance of the internet to a new generation of feminists:

“For many in my generation, the internet feminist community serves the same purpose as consciousness raising groups of the 1970’s. Feminist blogs are where we get angry over shared grievances, organize against said inequalities, and build and strengthen our feminist community. Disagreements that break out in the comment threads over everything from what’s offensive and what can be reclaimed to the very meaning of the term ‘feminism’ serve the same purpose as heated debates in women’s studies classes: to sharpen our critique and analysis and build on the shared knowledge and ideology of varying expressions of varying feminisms.” (Feministe, July 7)

9. Emily Gould, How Feminist Blogs Like Jezebel” Gin Up Page Views, on our ability to converse online:

“It’s certainly important to have honest, open conversations about the issues that reliably rake in comments and page views—rape, underage sexuality, and the cruel tyranny of the impossible beauty standards promoted by most advertisers and magazines (except the ones canny enough to use gently lit, slightly rounder, older, or more ethnic examples of ‘true beauty’). But it may just be that it’s not possible to have these conversations online.” (Slate.com, July 6)

“…I’m not anti-blog. I’ve got three or four of my own—but I’ve viewed them, and my own online activity, as ancillary to traditional activism like writing letters, going to meetings, neighborhood organizing, etc. If you think I sound like a jerk, you’re right. You know what I sound like? I sound like what older feminists used to sound like to me!…. We all have our different points of entry into feminism. Some of us get it from our mothers. Some of us get it in school. Some get it from books. Some get it from reading blogs. And once we get it, we are, rightly, outraged. Being outraged is not the ‘exact opposite of progressive thought and rational discourse.’ Outrage is what fuels a demand for justice.” (Mikkipedia, July 9)

7. Amanda Hess, “Feminism for Bitches” on the importance of equal access to feminist ideas (even online!):

6. Sady Doyle, YOU ARE ALL GOING TO BE DELETED on why assholes get deleted:

“Many [deleted commenters] are angry that I haven’t published their first-time, openly hostile comments right away, and willing to leave a series of increasingly unhinged comments to that effect!… I like to imagine the thought process [of deleted commenter trolls]: “Hmmm, she didn’t publish the one where I called her a bad feminist and accused her of damaging all women everywhere with her damnable 500-word blog posts. Maybe if I just called her a bitch? Yes! That’s it! That’s the move that will GET MY COMMENT PUBLISHED.” (Tiger Beatdown, July 8 )

5. Elizabeth Wurtzel, on why some anonymous commenters deserve to be institutionalized: 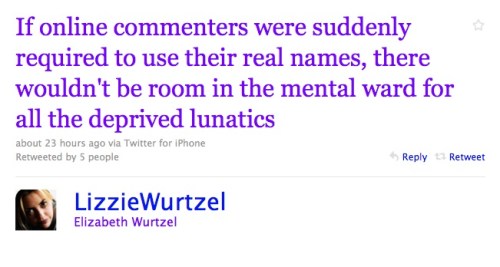 on the fruitlessness of arguing on AIM, which now applies to twitter: 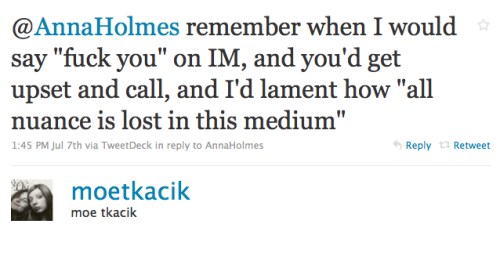 on the inevitability of “page view whoring” in the “bloggy business”:

3. The Jezebel Editors, Jealous Bitches Start Face-Clawing Catfight! on the value of Jezebel:

“… we are a business — this is common sense. But we feel very lucky that the nature of our particular business allows us to explore a wide range of topics, from domestic workers’ rights to debunking doctored images to watching Twilight (and, naturally, our content extends to all the celebrity, sex, and fashion that falls in between). We also have the freedom to explore the institutional sexism that, depending on certain experiences, may exist at a liberal-leaning, comedy-centric organization that is widely watched and respected. To claim this work is backhanded and baiting, to reduce it as an attempt to goad insecurities is, at its core, an insult and underestimation of everyone involved.” (Jezebel, July 7)

2. Michelle Dean, Someone got “The Daily Show” in My Jezebel and Together They Taste a Little Weird, on how not to make a grand thesis:

“…in general I think it’s important to be skeptical of grand theses based on sampling of Internet comments. Internet commenters (and I’ve been one! Still am!) are assholes; on this I think we can all agree.” (The Awl, July 7)

1. Jessica Coen, as quoted in Jennifer Mascia’s The Blog Jezebel is Not Afraid to Pick a Fight, on how best to engage with online readers:

“But Ms. Coen says that Jezebel’s audience is so loyal because its readers are not condescended to, but leveled with. ‘It’s great to see such a devoted audience,’ she said. ‘You see that your work matters to people.'” (The New York Times, July 12)

Do you read Jezebel? How do you feel about the internet’s role in advancing feminist goals? Do you have any feelings about the whole snafu? How’s your relationship with Jon Stewart?