If you haven’t tried cookie butter yet, your whole world is about to change. To be honest I don’t know what’s taken you so long because this spread got super popular in the USA a few years ago and apparently it was always crazy popular in Europe and it seems like everyone everywhere is always talking about how it’s a gift from the Goddess, but don’t worry, whatever, there’s no time like the present to right your wrongs and start eating it by the jar. I want you to go out and buy some cookie butter right now. I’ll wait. Then we’re going to go on a baking adventure together.

A quick note about this spread for you to ponder on your excursion to procure the stuff. People have a lot of Feelings about cookie butter. Specifically, some people think Trader Joe’s Speculoos Cookie Butter is the exact same thing as Biscoff Spread and some people believe that the two products are completely different and cannot be compared ever ever ever, okay?! So. I personally have only ever had the TJ’s version, and I can attest that it’s amazing and perfect and life changing and also a little bit dangerous because you will likely eat the whole jar in one sitting and then feel slightly ill. I’m sure the Biscoff Spread is equally delicious, but because I’ve never tried it I really can’t say if the two taste exactly the same or 100000% different. Also! Megan told Laneia to tell me that I need to try Trader Joe’s Crunchy Speculoos Cookie Butter because it is even more fabulous than the original smooth version, but I haven’t done that yet. If you have strong feelings about any of this you should tell me in the comments, duh. If not, let’s move on and get baking!

Today we’re going to make Spectacular Speculoos Cookie Butter Bars because I like alliteration, but basically they’re fancy cookie butter bars, mmmkay? I made them for my Superbowl Party (read: the time Lemon and my girlfriend watched the game together and I watched Beyoncé’s halftime show then promptly fell asleep on the couch) and they were a huge hit (read: Lemon and my girlfriend ate a lot of them and praised me when I repeatedly asked, “How are they? Are they good?”). I think they taste like what would happen if a snickerdoodle and a blondie had a baby.

VIA BUTTER ME UP, BROOKLYN! 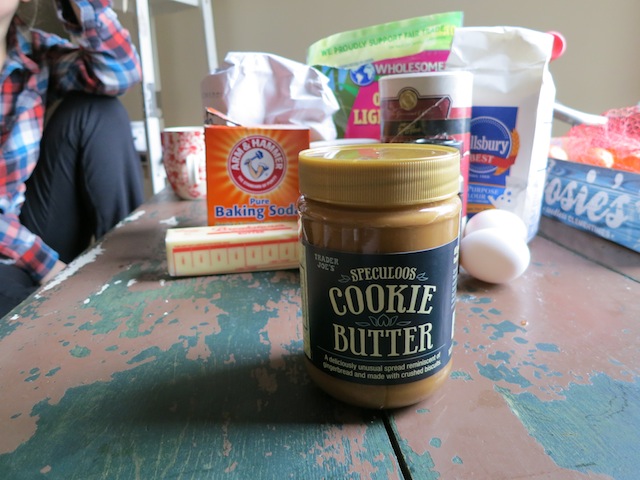 1. Preheat the oven to 375 degrees. Butter an 8×8 pan. The original recipe says to then line the pan with two sheets of parchment but I didn’t have any parchment so I skipped that part and it was totally fine.

2. In a very small bowl, mix the “Sprinkle” which is quite literally the stuff you’re going to sprinkle on top of other stuff in a few steps. So mix the sugar and cinnamon together but make sure it’s the small amount of those ingredients (listed under the Sprinkle section above) not the large amounts because we’re not there yet tiger, just hang on a moment okay? 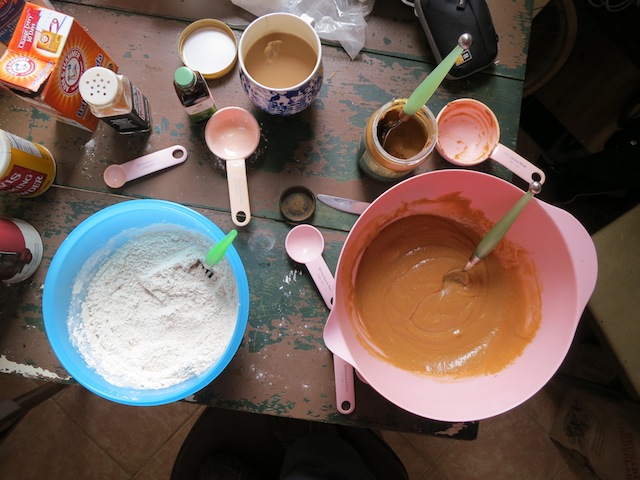 this is what cooking with me is like: blue bowl, pink bowl, camera, tea, mess

3. Now we’re moving on to the “make the dough for the actual cookie bars” segment of the recipe. Whisk the flour, baking powder, baking soda, salt and cinnamon together in a medium sized bowl.

4. Mix the melted butter and the sugars really well together in a new medium sized bowl. By the way when my brother was little he told my mom he loved “custard” and begged her to buy it for him so she bought like 5 different brands but he hated all of them. Months later while baking some dessert he was like “OMG THIS IS THE CUSTARD I LOVE” and it turns out it was just butter and sugar mixed together and he had tasted some while baking with his teacher at school and decided it was called custard and had been searching for it ever since. But it wasn’t custard, it was just butter and sugar. Aren’t kids grand? Anyway! Once the butter and sugars are combined you can add the vanilla and the eggs and continue to mix really well until everything is nicely incorporated.

5. THEN YOU ADD THE COOKIE BUTTER. The recipe suggests half a cup but honestly I added a whole cup and it was great. Probably could’ve added even more. Then I ate the rest of the cookie butter with a spoon out of the jar and I had to open a NEW jar of cookie butter when it came time to make the frosting. I’m not even embarrassed about it, I totally knew that would happen, that’s why I bought two jars in the first place.

6. Once your wet ingredients are nicely mixed, add the flour mixture. Stir it or kneed it or do whatever the heck you have to do to get the two mixtures to be friends and form a nice unified dough. 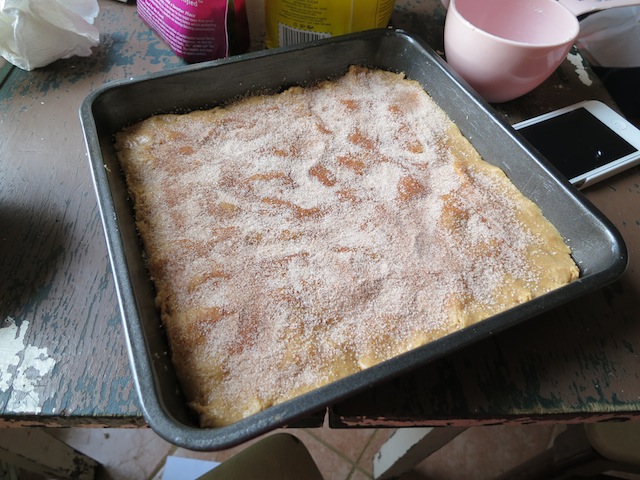 don’t worry young grasshopper, it may look like you didn’t make enough dough and i won’t blame you if you panic at this moment because i sure did, but the dough will rise, just like the sun does every day, and everything will be okay

7. Press your dough into the pan you set aside at the beginning. Personally I felt a little bit panicked about how flat the dough was — I felt like I hadn’t made enough (or more likely had eaten too much) but it rises a LOT in the oven so don’t worry, you’re most likely fine.

8. Take the SPRINKLE and SPRINKLE it on top of the dough! (I’m a little bit in love with the very literal naming of this part of the recipe, in case it wasn’t obvious.) Lift the pan and gently tap it to make sure the sprinkle covers the entire surface area of the dough. 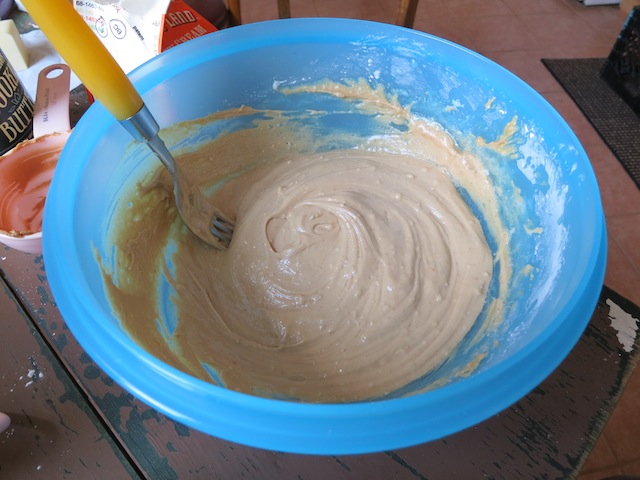 Guys: My girlfriend was right. The frosting is absolutely, without a doubt, the best part of this dessert. You have to make the frosting. Promise me you’ll make the frosting, okay?! Okay. Whew. Frosting. This is how you make it.

In a medium bowl, beat (or mix, with a large spoon and your incredible biceps) the butter, cookie butter, and powdered sugar together. Slowly add the heavy cream. The original recipe says beat for 5 minutes or until the mixture is light and fluffy, but I stirred it for like 15 minutes and still I wasn’t pleased with the consistency so I added a tiny bit of water (like 6-7 drops, seriously) and then mixed for another 5 minutes and then I was happy. I imagine this is easier if you have an electric beater but I did feel very accomplished when I was finally done, even though my frosting had a few lumps. Whatever, it had character. 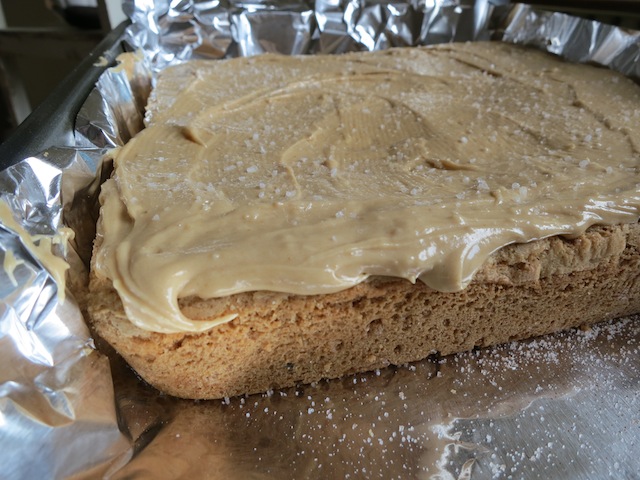 SALT MAKES EVERYTHING SWEET EVEN BETTER

11. By now your bars are probably done, so take them outta the oven, quick, don’t let them burn! Test them with a toothpick to make sure they’re cooked all the way through, marvel over how much they rose during the baking process, then let them cool completely.

13. The original recipe didn’t mention anything about sea salt, but I’m of the belief that adding salt to any baked good increases its deliciousness by 50 unicorns, so I’d recommend throwing some salt on top before cutting the bars. 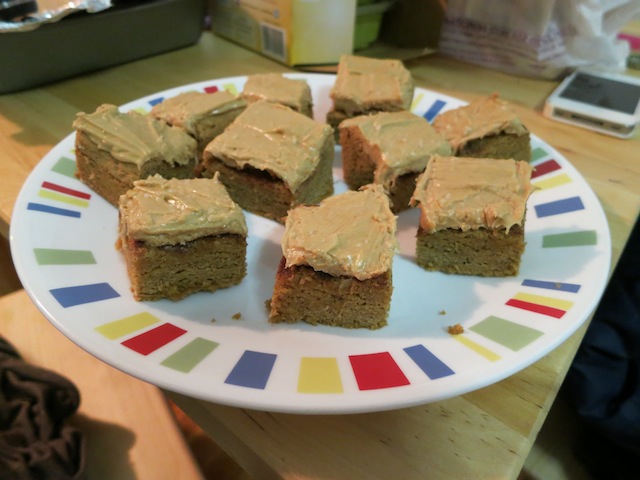 14. Cut the bars into small squares. This recipe should make 25 though it will obviously depend on how big or small you make your bars. Serve and enjoy!