1. There are lots of delicious vegetables around, and
2. Cooking for long periods of time (or really, at all) in a non-air-conditioned apartment is mild torture.

This zucchini recipe takes advantage of these facts by consisting mostly of delicious vegetables and by requiring that you have the stove burner on for under three minutes. It’s also the easiest thing you will ever make that still looks fancy. 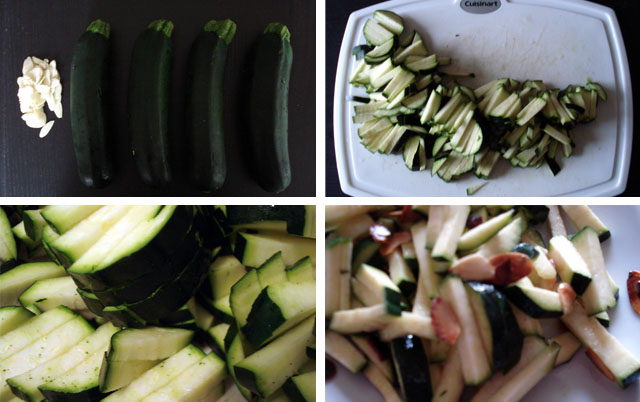 1. Prepare all your ingredients before turning anything on or adding anything to a pan over high heat. This part is really important and takes the longest, so even though it’s sort of under “ingredients,” I’m saying it again.

2. Heat the olive oil on high heat in a large frying pan. Right before it starts smoking, add the almonds. Stir continuously while they cook to a light golden-brown, which will take about a minute (if you’re not sure, “less golden” is better than “charred” by a long shot).

3. Add the zucchini to the pan, stirring so it mixes with the almonds and oil. Cook for one to two minutes, but no more — think “warming” instead of “stir-frying.”

4. Season and serve immediately. Serves 1-4 people, depending on how hungry everyone is and whether you’re using it as a side or as your main meal.