Editor’s Note: The title of this “Gentefied” Season Two review is a Mariah Carey reference, because it’s Thanksgiving week, which is my favorite holigay, and I’m feeling a little playful.

In Season One of Netflix’s Gentefied, Ana Morales, lesbian artist and lovable loudmouth of her family, always leading with her heart, found herself caught when a queer-affirming street art project also fell squarely into the crosshairs of political discourse about the rapidly gentrifying Boyle Heights neighborhood where she grew up, still lives, and still loves.

Yessika, Ana’s then girlfriend and Afro-Dominican housing rights activist, says of Ana’s art project at the time, “I’m all for fighting comadre homophobia with queer love bombs.” But that was before. Before neighborhood politics fell into their bed. Before Ana had choose between her first love, and her family. Before she made that choice far too easily for comfort.

Now months have passed, Yessika is gone, and once again Ana finds herself directly in line of a new question about queerness, brownness, capitalism and art. Her boss, Bree, has commissioned Ana to do an art piece for Nike (Ana and Bree have also hooked up a few times but shhhhh! because sometimes queer women do be messy, and we love that for them). Ana wants to showcase her abuelo and family patriarch, Casimiro, who is facing an upcoming final deportation hearing.

In Ana’s portrait, painted from a photograph taken of Casimiro asleep after Thanksgiving dinner, his eyes are closed and legs are outstretched, showcasing an ICE-issued ankle monitor over a clean pair of black Nike Cortezes.

Ana’s so excited to present to Bree, she’s nearly bouncing on the balls of her feet: “This is Nike, right? So ‘just do it’ and stand in solidarity with Justice. Stand with Casimiro Morales. No Papers, No Fear, Just Nike.”

Bree nervously jokes if it’s too early for tequila, “It’s too political.”

Ana rebuffs, “Is it? You said you wanted my voice, this is it.”

But we know what Nike is really looking for, right? Corporate identity politics that seem “down” without disrupting the center. Bree keeps pushing, “You are a queer Chicana. That is your voice. Ana this isn’t a platform for protest, this is a million dollar campaign…. This is celebrating brown lesbian women. This is a win for the LGBTQIA community.”

“I am a brown lesbian woman, and this is the win I need.”

And this — this showcases what the second season of Gentefied does so brilliantly. Ana doesn’t create separate boxes where’s she’s a whitewashed brown lesbian today and somehow leaving the realities of living in constant fear of La Migra at the door. No. It’s all inside her, all at once. Her wins are having her grandfather stay with his family, it’s being able to be her full gay ass-brown ass self, perfectly at home with her two knucklehead cousins as they try to final navigate young adulthood in neighborhood that’s rapidly changing (at one point Erik comes over to fix Ana’s broken pipes and she asks him if the 15 unanswered DMs to Yessika mean their relationship is over, he jokes “do you want me to lie?” and she kicks him like they’re 12 and not in their 20s. Later, at Thanksgiving, the three cousins partake in the annual tradition celebrated by brown cousins nationwide of “go out back and get high, take bets on who blows up the family dinner first”).

Gentefied always had a clear vision of the story it wanted to tell, taking seriously the intricate realities of brown families with some of the most stunning character arcs put on television in 2020. But the first season also struggled at times with tone and pacing — nothing that takes away from the beauty of show, however still noticeable as it found its footing. In its second season, Gentefied soars. It’s nearly unfathomable how good it is now — how it matured without losing its heart, how it never takes an easy out or answer.

It’s an exquisitely detailed portrait that asks all of its characters to be complicated, messy, whole people and not the two-dimensional flattened cutouts of “perfect immigrants” so often thrust onto our families, saddling us with unfair and ultimately dehumanizing expectations, no matter how long we’ve been here. To that end, there’s a speech given by Casimiro at the end of Episode Seven (“No More Band-Aides”) that’s already gone viral and speaks to this best, ending in a crescendo “I’m done begging…. I know I am not a criminal. This is my home. This is where I belong, whether you like it or not.”

And not to be gay (it’s me, I’m gay), but I most found these themes resonating in aftershocks of Ana and Yessika’s Season One break up.

As much I loved Gentefied’s first season, and I did, it was inexcusable that despite going through significant lengths to cast an Afro-Latina love interest for Ana from the very beginning — a rarity for Latine television both in the United States and in Latin America that should not be overlooked — the show ended with the Morales family closing ranks around Yessika in ways that reeked of racism and anti-Blackness. What’s worse is that it felt as if a lot of those choices came without intentional thought from the writers. Yessika became reduced to a stereotype of an angry Black woman, so imagine my delight when she returns this season as triumphant.

I wasn’t the only one surprised, actress Julissa Calderon noted that after the Season One break up, she didn’t expect to return, “I had no expectations because I didn’t know what was going on. When we ended in Season One, the girls had broken up. In the last episode, you didn’t see Yessika at all… I was like, well, maybe she’s gone. Maybe they’re done. Maybe she’s not coming back again.”

What’s most important is that Yessika comes back on her own terms. For the first time she’s given an episode from her own point of view (Episode Five, “Yessika’s Day Off”), including giving her a best friend from back home in New York who’s outside of Ana’s world. Within the community, other Boyle Heights lesbians clown Ana, telling her “We’re Team Yessika.” And in a particularly poignant moment, Yessika calls out the mistreatment she’s felt from the Morales family directly.

Without water for five days due to an irresponsible slum lord, Ana and her mother find themselves at Yessika’s housing advocacy and community group. Originally, their appointment was with someone else who works there, but that person is out for the day, and so here they are — at Yessika’s desk. It appears to be the first prolonged time that Ana and Yessika have spent together since their break up, and Yessika’s stiffness leaves Ana leaving in tears. Her mother asks, they’re family. Isn’t there anything Yessika can do to help? 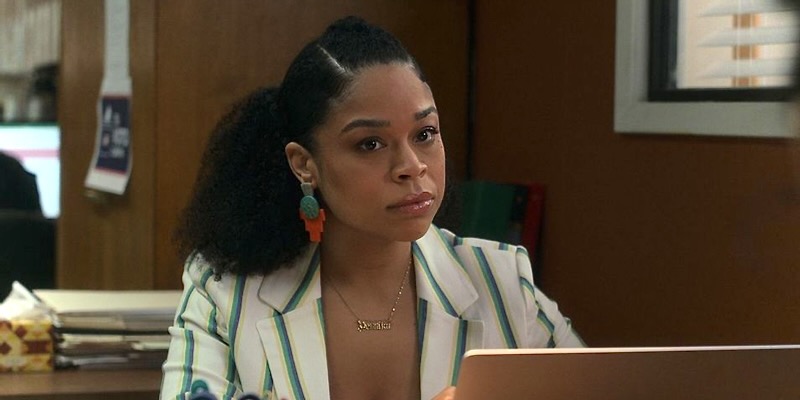 Oh ok so now we’re a family. Right? But what about all those times when I was only just “Ana’s little Black girlfriend?”

It’s stunning. And it matters the way that Yessika uses “negrita” here, which can be a term of endearment in certain Black Caribeñe communities, but an insult from outsiders. It matters that the entire confrontation happens in Spanish, with Julissa Calderon’s Dominican accent on fully display so beautifully against the rest of her castmates, a subtle (and proud) note of her what makes her markedly different. They don’t even “speak” the same language, not in the same way. It matters that if the writers’ room is going to use Yessika as a mouthpiece in this moment to address their own shortcomings from Season One, that they are not only empowering her — but backing that apology up with a standalone episode that arrives later in the season, and that when she and Ana eventually do come back together to rehash the fallout of their relationship (I won’t share details, for spoilers) this time it’s told through both of their points of view. It’s rare and brave for a production to not only address it’s own anti-Black bias, but to grow.

Addressing anti-Blackness in Latine communities is still frankly not done in the majority of our storytelling — in part, perhaps ironically, because of the pressures of telling a “perfect immigrant” narrative (though also because, white supremacy exists within our communities, I’m not trying to pacify it). You can look as recently as the film adaptation of Lin Manuel Miranda’s In the Heights this summer, where they simultaneously changed the book of the show to discuss DACA and Dreamers, while cutting the musical’s original plot addressing anti-Blackness completely. It creates a false binary narrative that brown immigrants, by nature of being both brown and immigrants, cannot also be racist, when in reality nothing could be further from the truth. Myths of mestizaje be damned, racial hierarchies exist in Latin America. They are brought over here into our communities.

Comparing Latinx immigrant narratives this year, look at In The Height’s erasure with Gentefied, where these lived experiences of anti-Blackness are seen not only through Yessika’s eyes, but also in Episode Three (“Daddy”) where an Afro-Latina trans college student, Diane, herself far from “perfect” — once again circling back on the theme on the values of our imperfections and humanity — faces unconscious bias in her workplace from her Latina boss (Erik’s wife, Lydia, and I am simplifying some plot here) and it gets called out as such. In a late season episode, Casimiro looks on in a quiet nod to the fact that while the show is centered on immigration narratives of Mexican families like the Morales, Haitian families also face some of greatest threats of deportation in our broken and violent immigration system. Sure, some of these moments I’m mentioning are small — and some are large narrative through lines. But they’re all candid and sincere.

They’re the moments that make Gentefied truly great, because it’s comfortable with being challenged.

Carmen has written 450 articles for us.