As Halloween rolls gamely around the bend and our ancestors grow increasingly disturbed by current events, we’ve all got ghosts on the brain. And a lot of you have ghosts not only on the brain, but also in your actual lives, according to data from our Lesbian Stereotypes Survey (demographics here) when compared to data from the Pew Forum. 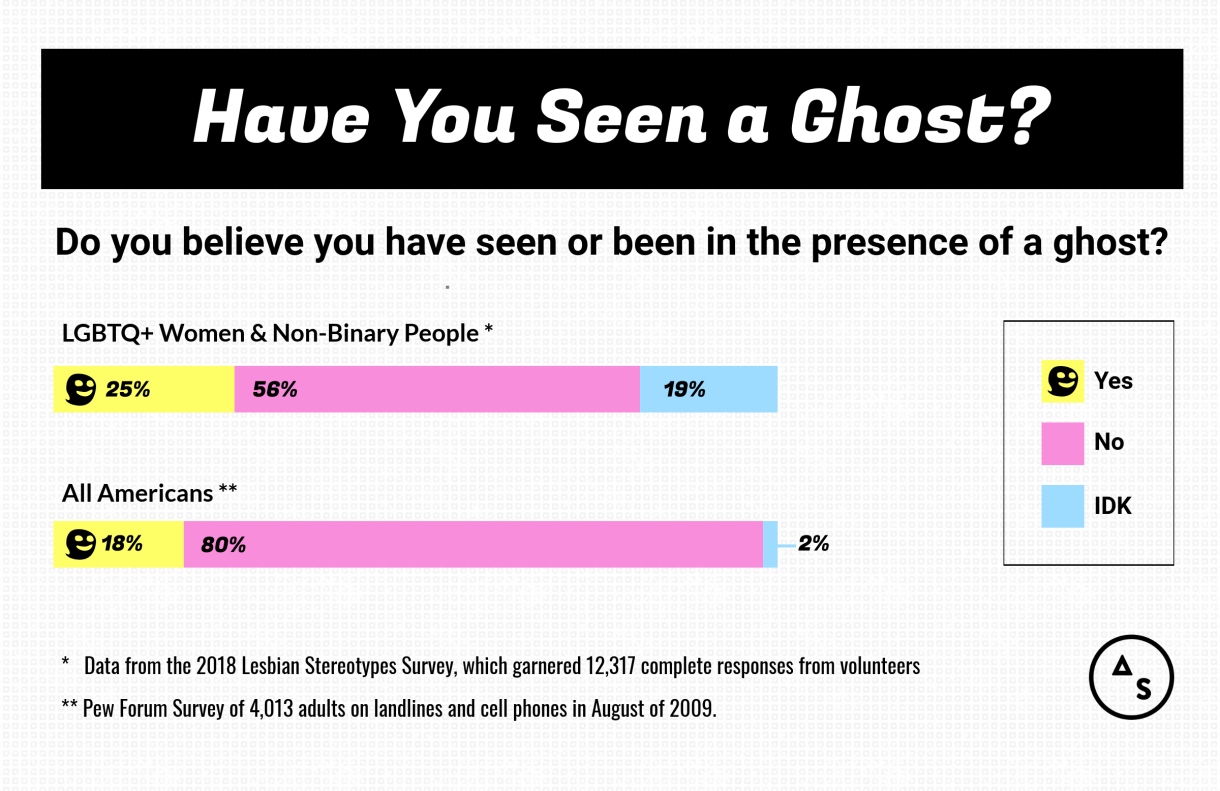 This will not come as a great surprise to the Spiritual Research Foundation, a strip-mall outfit who made the news a few years back after they determined that lesbians are only attracted to women because they are possessed by male ghosts. However, it bears mentioning that only 25% of lesbians have seen a ghost, compared to 36% of pansexuals, and I’m not sure what gender of ghost would cause pansexuality. Maybe lesbians don’t see ghosts because the ghosts are already inside us. That being said, I’m a lesbian who has seen and heard ghosts. I understand now, from reading the comments on this survey question, that this information will upset many of you, because of Science, a subject I was never very good at.

I don’t have numbers on ghost sightings in other countries, but at least in our group, ghost sightings are more common in North America — 33% of Mexicans and 27% of Canadians have seen ’em, compared to a mere 23% of Oceania residents and 14% of Europeans! This is confusing ’cause I was under the impression that Europe is chock-full of castles, manors, and other buildings notorious for haunting. Also, one person testified that Australia is a “ghost-dense country,” yet only 23% of Australians have seen a ghost, what gives?

The most haunted major cities, by percentage of people living in them who’ve seen ghosts, were New Orleans, Orlando and Dallas, with 44% each. The least haunted were London (15%), San Diego (21%) and Washington DC (21%). However, residents of these cities may have been reporting (or not reporting) ghost sightings in cities besides the one they currently live in.

Your comments indicated that, as anybody with an ex-girlfriend who regularly made them read to her from books of ghost stories until she fell asleep (me. it’s me who had to read the stories.) could tell you, ghosts are very tied to very specific places. Y’all have seen ghosts in specific places including but not limited to your haunted apartment / house / condo, nursing homes, summer camp, train stations, theaters, a shit-ton of college dormitories and, even more specifically:

Very few recounted seeing actual physical ghosts, but some did, like the person who, at the age of 12, saw a headless ghost on a busy street corner in broad daylight. (“My dad saw it too.”) Smelling a ghost came up a lot, as did “feeling” a ghost, or being subject to a ghost’s actions, like being locked out of your house or a room. You have born witness to a variety of hauntings including but not limited to:

Finally, one of you shared the following story which I’m not sure what to do with: “The spirit of a random guy absolutely shared my college apartment. He spent a lot of time on the couch watching TV while I was on my computer. We were fine as long as he didn’t go near my bedroom.”

On Pew’s survey, religiously unaffiliated folks were more likely to have seen ghosts (19%) than Protestants (17%) or Catholics (17%). On our survey, Unaffiliated Atheists were the least likely to have seen a ghost (12%), which checks out — atheists were across the board the most likely on our survey to state scientific opposition to G-d, crystals, astrology, witchcraft and ghosts.

The religions within our group most likely to have experienced a ghost are Wiccans (69%), Historically Black Protestants (47%), Buddhists (40%), “Other Christians” (35%) and Catholics (28%). The least likely were atheists, obvs, along with Evangelical Protestants (15%) and Orthodox Christians (16%) bringing up the rear.

The only races Pew gave data for are White, Black and Hispanic, and they found 20% of Black and Hispanic people having seen/felt ghosts, compared to 17% of white people. On our survey, 26% of white people have seen/felt a ghost, which places their hauntings above Asian/Pacific Islanders (20%) and below people who identified as Native American/First Nation (44%), Latinx/Hispanic (36%), Middle Eastern/North African (33%), Black (31%) and Mixed-Race (30%). This is consistent with the breakdown by race of allegiance to other supernatural/new age beliefs/practices too, which is unsurprising considering so many of those practices and ideas were cribbed from Indigenous traditions to begin with.

Some survey-takers did cite spiritual communication and presences as part of their family, religious or ethnic heritage, like one Irish/Cherokee/Romini person who said they have communicated with spirits since they were a small child, and a mixed-race person who said, “where I am in the far east of Russian federation, this is not debate-able.” Several mentioned “ancestral spirits.”

Some have witnessed or believe in ghosts or spiritual presences as part of a more tragic legacy. “I think the ghosts of Native Americans are present all over the U.S.,” said one. “What used to be a slave market in Philadelphia is I’m sure haunted by and not in a fun spooky way, in a hugely tragic horrific way.”

We Talk To Dead People

Many feel spirits as “energies” in places, or wonder if dead loved ones seen in dreams were really there. “I do believe in the presence of spirits based on the thoughts of memories of people who wish to have them near,” said one survey-taker who envisioned her grandmother at her wedding.

Some had seen mediums to communicate with dead relatives. One recalled, as a child, having conversations with a spirit when they were alone, and when they shared these stories with their family, were told these stories only could’ve come from “Papa,” their dead grandfather.

“I’ve had very vivid dreams of loved ones I’ve lost,” wrote one survey-taker. “When I’m about to touch them to see if they’re alright, I make eye contact, smile, and then wake up.””I full-on believe that my dead parents are with me all the time,” wrote another. Many said they feel the spirits of dead parents or other loved ones with them constantly, frequently or occasionally. (I am one of these people.)

Ultimately, where there is fear, there is a person needing comfort from that fear, as perhaps we’ve all realized in recent weeks while mainlining The Haunting of Hill House.  Which brings me to another (probably not representative but what does anything mean anymore these days anyhow) theory of ghostly affinity, from a survey respondent who recalled, at the age of 13, seeing a CD case fly through the air at a friend’s party. “The girl I had a crush on held my hand and cling to my side afterwards,” she wrote, “so I was pretty inclined to keep everyone believing there was a ghostly presence in our midsts.”