Welcome to our very first post containing information drawn from the 2018 Autostraddle Lesbian Stereotypes Survey! Over 12,000 people completed the survey, and these are the demographics of the respondents: 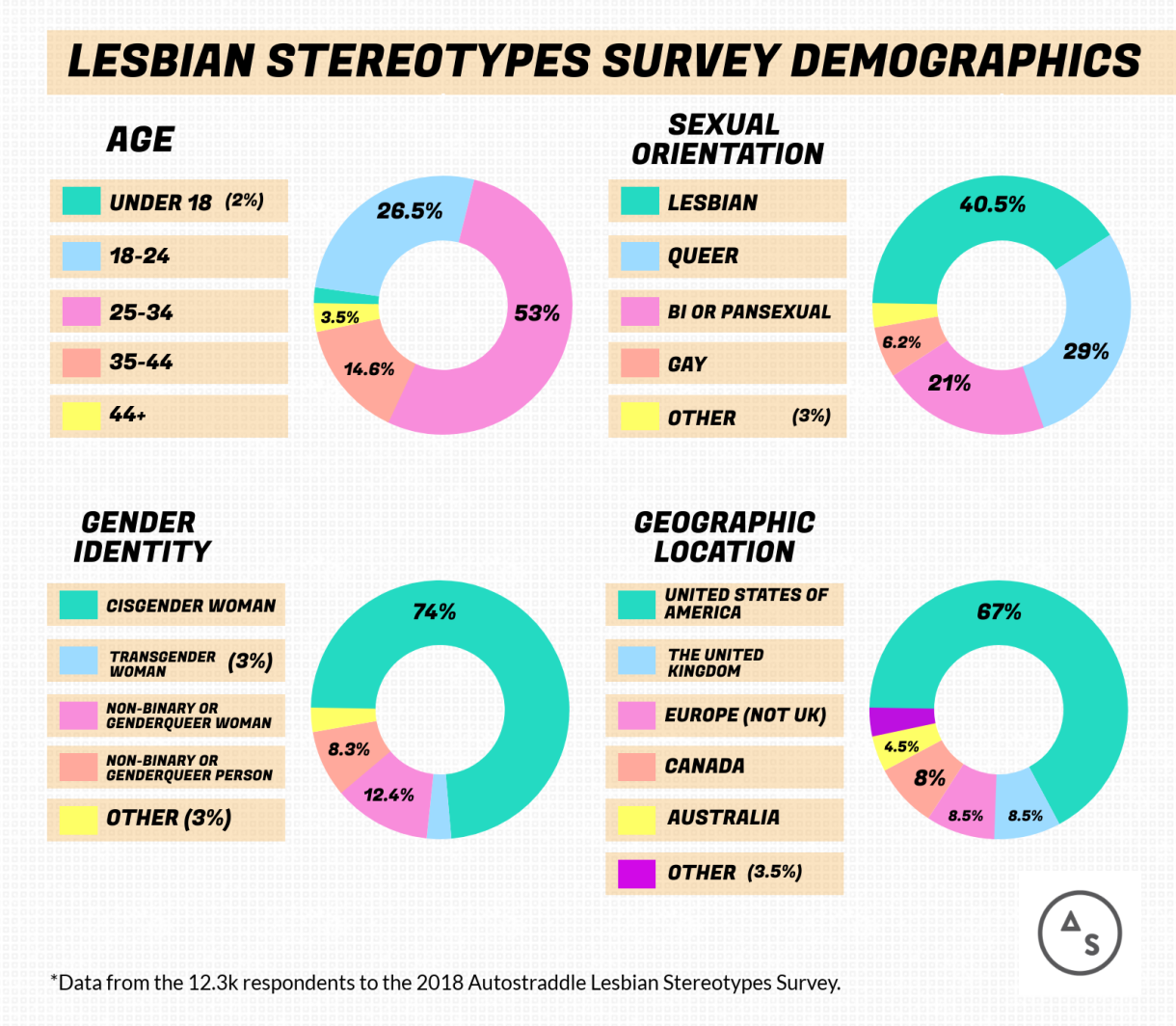 We’re kicking off our analysis with a topic near and dear to the hearts of far too many of us: pet ownership. Specifically, is it true that “lesbians love cats”? My friends — it’s… mostly true. Despite 26% of Europeans and 12% of Americans being allergic to cats, including me, queer women and non-binary people continue obtaining, raising, and loving cats with absolute abandon, at relatively significant rates. Conversely, despite the general excellence exhibited by dogs throughout human history and the superiority embodied by my dog Carol specifically, queer women and non-binary people are not more likely to own dogs than your average everyday heterosexual Jo. (jk there are no heterosexual Jos).

Before we get too deep into this important news, let us first declare that we are also a little bit more likely to own pets in general. 68.6% of U.S. residents on our survey said they own at least one pet, compared to 62% of all Americans (according to a 2015 Harris Poll that surveyed 2,205 U.S. adults), but it’s worth noting that our survey group skews young, which is not an inherent characteristic of a queer group, and young people are apparently more likely to own pets.

65% of millennials own pets, according to that same Harris Poll, whereas 66% of our 18-to-34 group does. They found 71% of Gen X-ers owning pets, compared to 76% of our 35-to-44-year-olds. So age did indeed give us an edge, but we’re still doing a lot of the heavy lifting ourselves. However, most of our lift takes place in the realm of… cats.

There are only two types of pets we are more likely to own than straight people: cats and reptiles/amphibians. 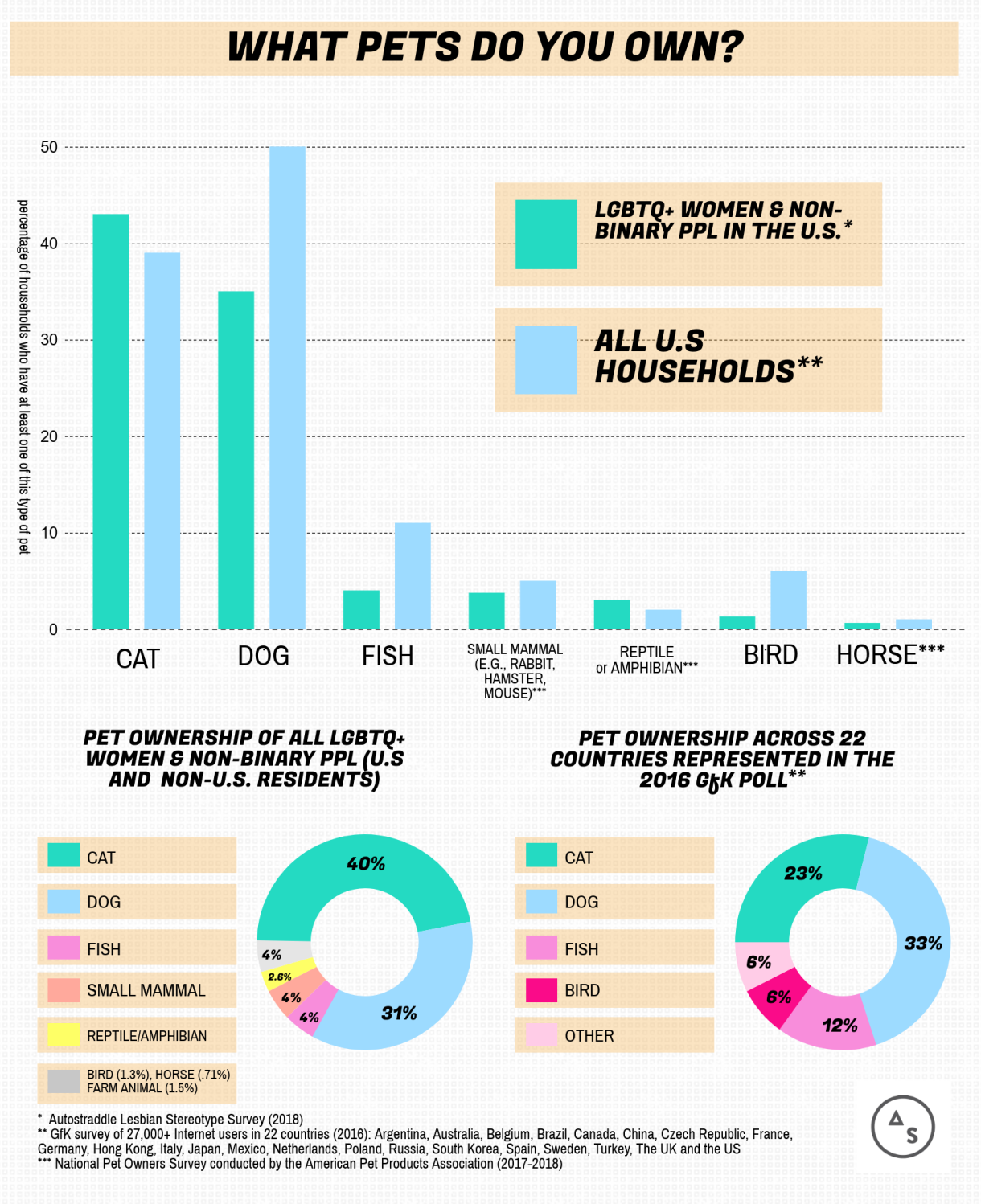 Some other interesting comparisons:

This survey’s cat-ownership numbers were a little higher than what we’ve seen in prior surveys. Our 2016 Autostraddle Reader Survey showed 37% of all respondents and 40% of all U.S. residents admitting to cat ownership, but that number has crept forward over the last two years. This may be because a queer woman in possession of a cat is exactly the type of person who would want to take a survey about lesbian stereotypes, or perhaps everybody went out and bought a cat in 2017 because they needed something to hold onto while democracy dies.

Still, even those old numbers are at least slightly higher than overall numbers of cat ownership, regardless of which survey you compare ours to — and there are plenty to choose from! 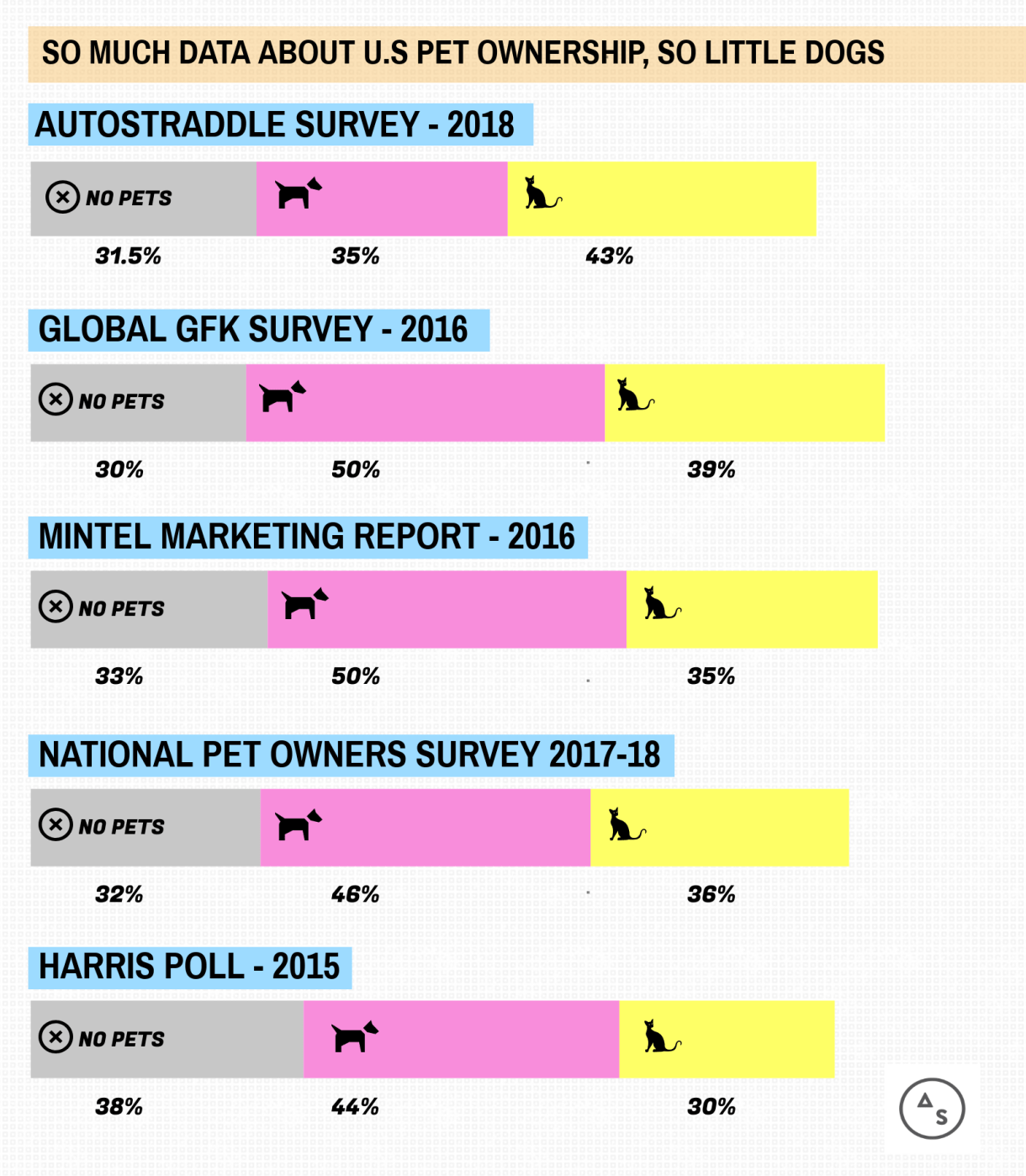 Cats of the Commonwealth

We had enough survey-takers in the United Kingdom, Australia and Canada to look at their numbers, too. And the preference for cats over dogs gets even more dramatic outside of the U.S., as does our apparent indifference towards fish and birds: 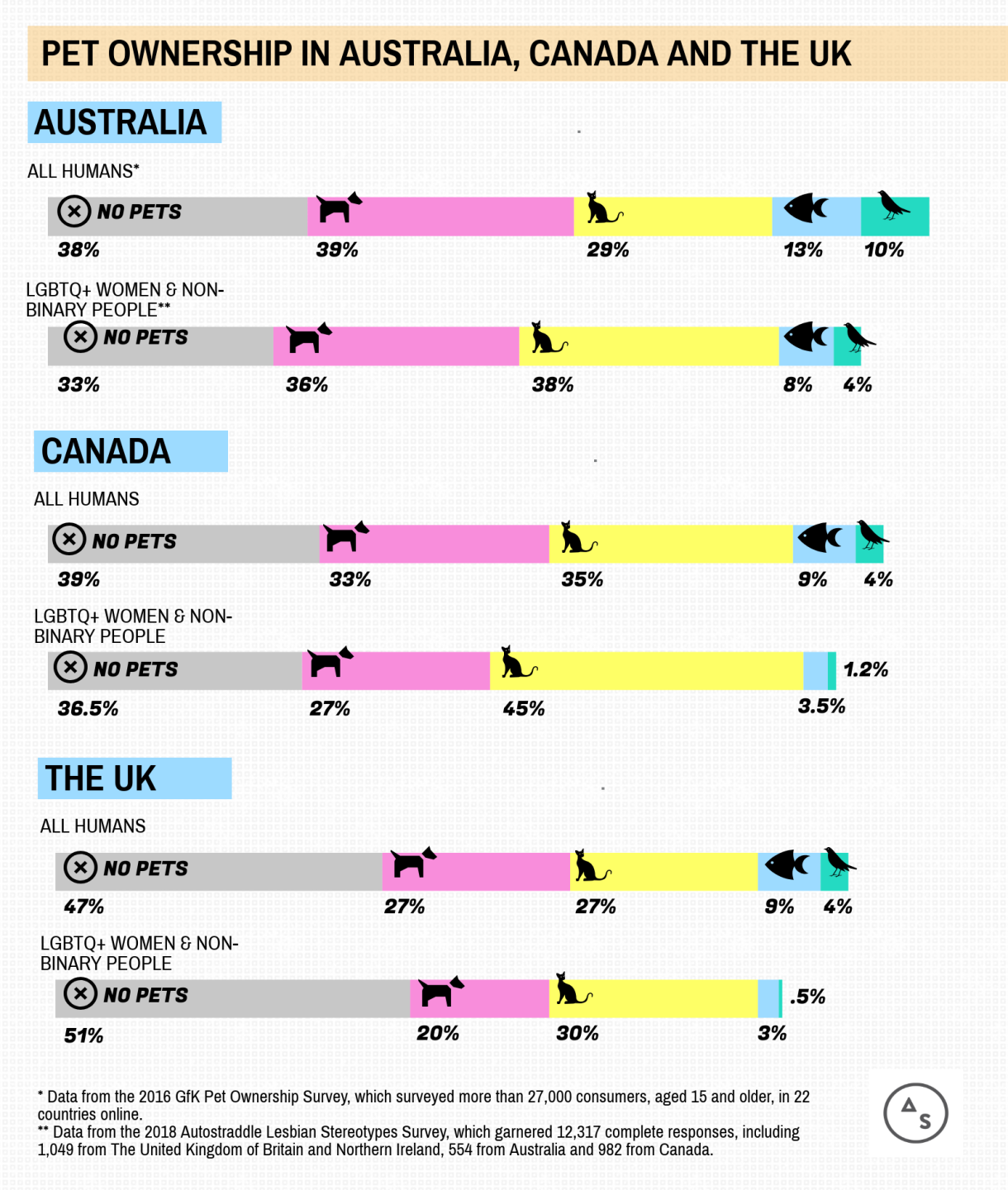 Apparently in these three countries, the preference for dogs over cats amongst all humans is not quite as dramatic as it is in the U.S..

Autostraddle’s very high cats vs. dogs numbers in Canada specifically might be due to 76% of our Canadian survey-takers living in urban areas (compared to 62-63% of others), where it can be easier to own a cat than a dog. Four times as many Montreal residents, for example, own cats rather than dogs. On a related note, Montreal is a lovely city and also the coldest place I have ever been, and also there are apparently just a lot of cats in Canada. 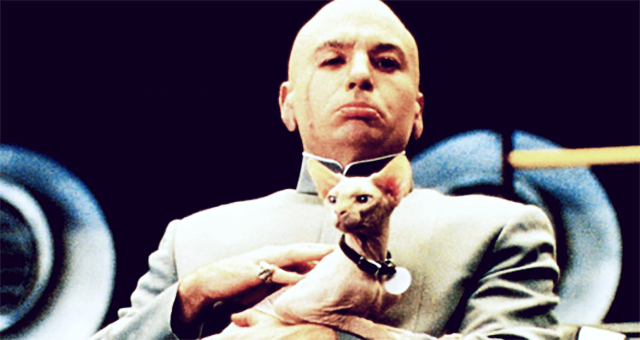 If you search “how many men own cats” you’ll get a lot of articles like “8 Reasons You Should Consider Dating A Guy Who Owns A Cat” and “Is it Usual for Straight Men to Own Cats?,” but despite this apparent cultural unease, men are living with cats like there’s no tomorrow.

In 2001, a Gallup poll declared “the stereotype of older women loving cats — and lots of them — is not supported by the Gallup results.” They found older men just as likely as older women to own cats, and “little difference” between these two genders for cat or dog ownership across age groups.

The 2016 gfK survey found 40% of men and 38% of women in the U.S. owning cats. Last year, multiple news outlets in the U.K. reported that more than two-thirds of cat owners are men. Mintel Research, in the U.S., also found that men were more likely than women to have a cat, with a whopping 46% of millennial men owning cats. In 2008, The New York Times wrote a trend piece about busy working men who found cats to be the perfect furry companion for their lifestyles, declaring the rise of “a growing number of single — and yes, heterosexual — men who seem to be coming out of the cat closet and unabashedly embracing their feline side.” In 2016, an Australian newspaper hailed “the rise of the cat man.” I missed all of these articles because I don’t care about men, but there’s so many more where those came from.

So, it’s not our gender that makes our group more likely to own cats than the population-at-large. I can only conclude that it is a worldwide conspiracy against me, but I am open to theories from cat-lovers in the comments.

Some Fun Stats Regarding Different Types of Pet Owners

This survey got a ton of responses and is teeming with bizarre information, which makes it a virtual playground for irrelevant data collection. I set SurveyMonkey to compare all different types of pet owners, and then went on a terrific jaunt through the rest of the survey to see what their algorithm declared statistically significant.

Other interesting situations include that small mammal owners are the most likely to be vegan or vegetarian and reptile/amphibian owners are the most likely to have ever seen a ghost. Like… by far. 39% of reptile/amphibian owners have seen or been in the presence of a ghost — all other pet owners are at around 28%-30%, and non-pet-owners are at 18.5%. I can therefore safely conclude, with the authority vested in me by the fact that it’s too late at night for another editor to edit this post before it’s published in the morning, that ghosts are attracted to reptiles and amphibians as well as animals in general. If you’d like to see a ghost, you should probably buy a lizard.

Unsurprisingly, those who own horses and other farm animals are the handiest around the house by far, as well as the most environmentally conscious and the most likely to be former vegans and vegetarians. 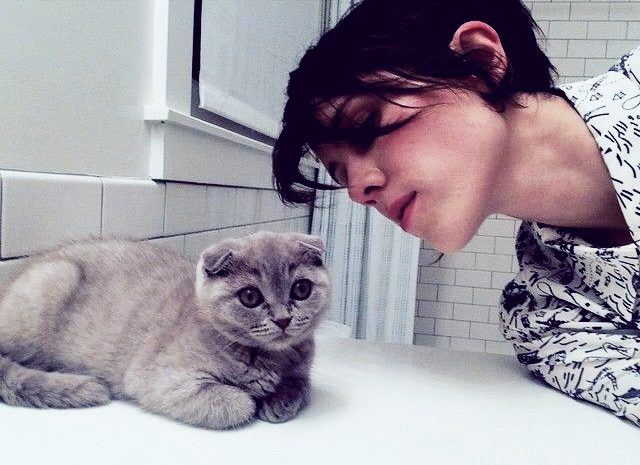 There are a lot of weird narratives around cat ownership for straight people, like the aforementioned concern that only gay men own cats. Then there’s the “crazy cat-lady stereotype,” most strongly associated with not just unmarried women, but undesirable unmarried women, which has thrived for some time. In “The Crazy History of the Cat Lady,” Linda Rodriguez notes that after centuries of cat ownership being associated with witches and widows, followed by several decades of terrifying media depictions on shows like Saturday Night Live and The Simpsons, “Cat ownership by an unmarried woman had come to signify a kind of mutual capitulation of that woman to a society that wouldn’t or couldn’t marry her.” Rodriguez believes that the stereotype is changing, however, thanks to Taylor Swift having a cat, the evolution of the role of marriage in society, increased visibility of actual cat owners on the internet, and a cultural shift initiated by marketers to embrace pet owners with outsize affection for their furry friends. I’ve got another theory to add to that stack, though. Maybe — just maybe — it’s got something to do with us.

I honestly expected the numbers to be even more dramatic than they are — but maybe that’s because the real difference isn’t that we own oodles more cats than everybody else, it’s that we talk about cats a lot more than everybody else.

So many lesbian stereotypes come down to one thing: a perception of lesbians as unashamed to be enthusiastic about things straight women are supposed to avoid or, at the very least, stay quiet about. For example: being fat, sporting body hair, dressing for comfort over style, foregoing makeup. “Being obsessed with our cats” would fit neatly onto that list, I think.

Proud cat ownership, much to my personal despair as somebody who is allergic to the furniture in the homes of 40% of my potential dating pool, is just another example of us setting trends and being way ahead of the curve.

In conclusion, my dog Carol is really great!!!!