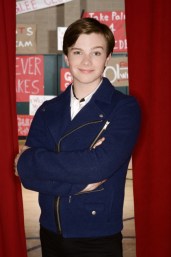 GLEE: The number of gay, lesbian, bisexual and transgender characters on prime-time broadcast television is up this season, and the folks at the Gay and Lesbian Alliance Against Defamation are crediting Fox’s “GLEE” with leading the way. As you may have noticed, the “L” isn’t exactly center-stage this year. As Carlytron discussed, Grey’s Anatomy is not nearly lesbionic enough this season, and GLAAD confirms, “at the moment, there is only one regular lesbian character on a broadcast prime-time series.” The gay men on teevee sitch is bouyed by Modern Family, a sitcom with two gay Dads that topped the ratings last night. (Autostraddle’s recaps of last night’s Modern Family and Glee will be up tomorrow!)

At The LA Times, “Glee is a little bit sexy”: “Glee has claimed frank sexuality as part of its domain … I’m here to argue that Glee may be just that [family hour show] Not in spite of the straight-on sexuality but because of it.”

AfterElton has a new interview with Glee’s Jane Lynch and check out some of the cast on The View this week.

LESBIANS ON TEEVEE?: Ming Na on her new Stargate Universe Role: “I didn’t realize that she is actually going to be “Stargate’s” first openly gay character” and Rose Rollins & Mia Kirshner will guest star in the same episode of CSI airing October 14th. Meanwhile over at Hollyoaks, Zoe Lister confirms last year’s girl-on-girl makeout between “Zoe Carpenter” and “Sarah Barnes” was just a drunken mistake: “I don’t think they do have feelings for each other in that way.”

BOOBS: Emily Deschanel, Katherine McPhee, Alyson Hannigan, Minka Kelly and Jaime King are all touching each other’s breasts, to remind you to touch yours:

WHIP IT:Ellen Page & Drew Barrymore head out to the LA Derby and look super cute, per ushe, but definitely not as cuddly as they were in Toronto. At the most recent Whip It! Premiere in Los Angeles, we feel they could’ve spent more time making out on the red carpet, or gazing into one another’s eyes with admiration. Just an idea we had, that’s all. 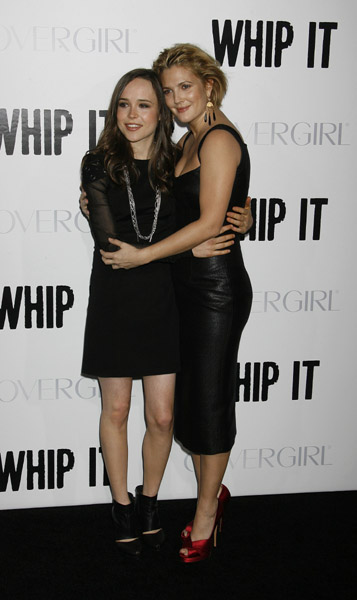 SO YOU THINK YOU CAN SHOW US YOUR VAGINA: So You Think You Can Dance had a vadge on it apparently, the world is ending. Did anyone else see the Degrassi Movie, btw? Srsly anyone? (@gawker)

AMANDA FUCKING PALMER: Amanda Palmer has a point – “It’s about empowerment and it’s about SIMPLICITY: fan loves art, artist needs money, fan gives artist money, artist says thank you.” – Why I Am Not Afraid to Take Your Money.

GLAMBERT ON TOP (OBVS): Adam Lambert’s musical masterpiece is number 1 on the Amazon.com presales, ahead of new releases by Barbra Streisand, Madonna, The Beatles, and Susan Boyle.  The record comes out November 24th and he just tweeted that he is in the studio with Linda Perry!

MADONNA : Highlights of Madge’s 8th appearance on Letterman this week — watch her eat pizza with Dave!

READ A F*ING BOOK: It’s Banned Books Week! The Bilerico Project made a list of 10 queer books that shouldn’t be banned. The Whole Lesbian Sex Book makes the list, phew.

READ A F*CKING BOOK THURSDAY: The debut novel of Lambda Literary Award-winning writer Ali Liebegott, The IHOP Papers features 19-year-old Francesca, a fledgling lesbian and recovering alcoholic who maybe hasn’t had a lot of experience but is eager to jump into important queer experiences like falling in love with your philosophy professor and also maybe your AA sponsor after moving to San Francisco and supporting yourself with a shitty job at IHOP. “A comic portrait of survival and self-discovery” that is hilarious and heartfelt and sometimes kind of alarmingly true to life. [This recommendation has been brought to you today by the letter R [and a, c, h, e, and l for Intern Rachel!]