Today the CDC released a study that shows that LGB students are more likely to engage in dangerous and unhealthy behaviors than their straight counterparts. The study is based on anonymous surveys completed by 156,000 high school students between 2001 and 2009 and is the largest of its kind to look at teen sexuality and behavior.

While the survey was administered all over the U.S., individual states and cities were given the choice to include optional questions about a variety of topics including sexuality. 9 states and cities that met the sample size requirements included questions about sexual identity, 12 asks questions about the sex of sexual partners, and 8 included questions about both identity and contact. The report shows the “disproportionate rates at which sexual minority students practice many health-risk behaviors. This disparity is most apparent among students who identify themselves as gay or lesbian or bisexual.” Of the health-risk behaviors measured, the prevalence was higher among gay and lesbian students than straight students for 63.8 percent of the behaviors and lower for only 1.4 percent. For bisexual students, the prevalence was higher than heterosexual students for 74 percent of behaviors and lower for 1.3 percent. 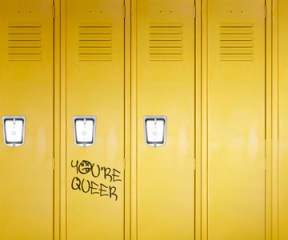 Some key findings mirror previous research; for instance, measures that are tied to bullying and suicide are substantially higher in LBG students and students who have had sexual contact with members of the same sex. Another set of questions gives some much-needed peer-reviewed evidence of same-sex dating violence, something that is often written off or overlooked.

There’s a lot of good going on here that we don’t always see when it comes to studies and sexual minorities. The differentiation between sexual identity and sexual behavior shows an acknowledgment of the complexity of sexuality. The researchers took responsibility for their research (which, if you haven’t read the actual report, sounds like it could easily be co-opted to prove just how evil the gays are) by highlighting that students who are LBG face social undesirability and recommending that:

“Public health and school health policies and practices should be developed to support establishment of safe and supportive environments for all students…The policies and practices designed to reduce the prevalence of health-risk behaviors are more likely to have an impact if they consider the context in which risk behaviors occur. For sexual minority students, this means addressing the challenges they face at school.”

They encourage schools and health officials to take steps that will improve safety and encourage safe behaviors for gay kids, and give examples of efforts from different school districts including GSAs, implementing safe spaces, creating training to help teachers with understanding terminology and issues facing sexual minority students, and providing open and non-judgmental health care.

Not without its limitations, the study has a few problems that have been addressed by its authors. Because the survey was only administered in public schools, private school students and drop-outs are not included. The researchers acknowledge that there may be a disproportionately high percentage of LGB dropouts whose experiences were not reported. There is no mention of trans* students in the study, leaving a wide gap in the research that will have to be addressed in subsequent work.

A survey like this shows only association and not causality, meaning that we know that LGB kids are more likely to take part in dangerous behaviors, but we don’t know that they’re more like to take part in them because they are LGB. It would be a mistake to assume any cause-and-effect relationship from this study (although one that anti-gay spokespeople are likely to make). A student may feel unsafe coming to school because they’re being bullied for being gay, but it also might be because they live in an unsafe area. Furthermore, coming out is in itself a risky behavior for many students.

Finally, when conducting surveys, it’s impossible to know when students are over- and under-reporting behaviors. I answered these surveys throughout high school and, while I can’t speak for other schools, I know that at mine we talked through the whole thing and hardly any of us answered honestly. Is it possible that a student who is more likely to be open about their sexuality–especially when it conforms to an unpopular minority–more likely to accurately report other behaviors?

You can read the entire survey here. If you’re more of a table-type person, I would recommend heading down to page 53 to see the data in charts.