If there’s one news story that it seems like we’ll be able to rely on until the end of time, it’s that of the “evangelical Christian/religious conservative who is secretly gay.” Just a few quick examples, off the top of the internet’s head: 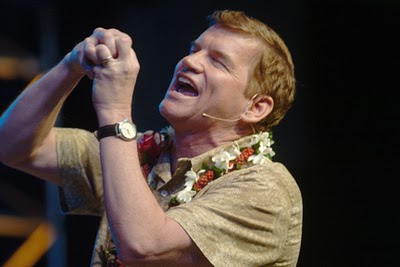 + John Paulk, head of the ex-gay movement, fired from Exodus International after continuing to meet men at bars

+ Matthew C. Manning, who became un-gay in 1989 but has been arrested for public sex at least three times since ’98

+ Roy Ashburn, who came out after being caught in a gay bar despite his decidedly anti-gay voting record

And there are plenty more. Need to hear more? There’s plenty where that came from.

There’s a pretty standard party line on these kinds of stories. You have the otherwise uberprivileged middle-class (usually) white male who, conflicted between a sexuality he didn’t ask for and a faith he was born into (or that makes him a lot of money) (or just plain fear). Unable to reconcile the two, he chooses to attack the gay community and, by association, his own identity. It’s a sad story of trying to deny who you really are because of what you’re told you have to be. Or is it?

Joshua Knobe writes about the story of Mark Pierpont, who fits pretty much all of the criteria described above. He was a key figure in the evangelical Christian movement to ‘cure’ homosexuality, a prominent ex-gay himself. He continued his commitment to the movement despite the fact that he was aware his desire for other men had never really gone away, and he had to constantly struggle to try to suppress them. In the end, he stopped trying; today, Pierpont is a member of the “ex-ex gay” movement. He was even featured in a 2006 documentary, Protagonist, about “obsessive need for control” and giving it up. So, this story has a happy ending: Pierpont was ultimately able to acknowledge who he really was, and can now live an honest and genuine life.

Knobe thinks it’s more complicated, though. In an uncharacteristically philosophical take on the question of sexual orientation, he asks: is being gay really any more “authentic” than being religious?

One person might look at his predicament and say: “Deep down, he has always wanted to be with another man, but he somehow picked up from society the idea that this desire was immoral or forbidden.  If he could only escape the shackles of his religious beliefs, he would be able to fully express the person he really is.”

But then another person could look at exactly the same case and arrive at the very opposite conclusion: “Fundamentally, Pierpont is a Christian who is struggling to pursue a Christian life, but these desires he has make it difficult for him to live by his own values.  If he ever gives in to them and chooses to sleep with another man, he will be betraying what was is most essential to the person he really is.”

Or, put another way, the question is this: ultimately, is the person we really are about the way we’re born, or the choices we make? For most people with some level of common sense and awareness, it’s understood that sexual orientation is relatively innate from birth or at least early on, while religious affiliation is a choice. But especially in America, where the ex-gay movement thrives and where making choices about your own destiny is a foundational national principle, it’s perhaps a worthwhile question to ask. Is it fair for us to decide that we as a culture know who someone ‘really is’ because of who they want to sleep with, if they’ve spent their whole life pursuing a totally different life?

There’s a lot of talk about the animosity of the conservative Christian community towards the gay community, and for good reason. Conservative Christians (especially Mormons) are one of the most socially and politically powerful groups in America, and our entire national history has been testament to how effectively they’re able to use the political process to work for their religiously based values in what is technically a secular country. But this has a countereffect; the animosity of the gay community towards Christians. For those in Mark Pierpont’s position, people who can no longer deny their sexual orientation but have a genuine sense of faith and devotion to a culture they grew up in, it can feel very much like being stuck between a rock and a hard place. Which to throw in your lot with, the group that promises to love you like family as long as you never let down your guard against your slightly-extra-sinful nature, or the group that might accept you as one of their own but may never give up their derision of your faith? It’s not that queers don’t have good reason to be mistrustful and angry at the religious establishment, but gay Christians, even those who are willing to accept their sexual orientation, also have good reason to feel like the two might be mutually exclusive. When choosing either means giving up something that you truly feel is basic to your nature, the line between which one is the “real you” is pretty justifiably blurry. 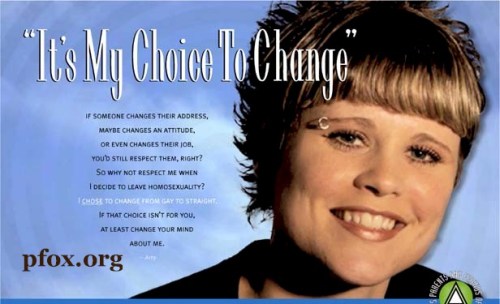 It’s a complicated issue, and Knobe chooses to untangle it with politics. In an effort at “experimental philosophy,” they spoke with a sample of 200 people, along a wide political spectrum. Some identified as liberal, some as conservative; all were given anecdotal examples of  human behavior and choices, and asked to identify which represented the person’s “true self.” For instance: “Ralph used to make a lot of money and prioritized his financial success above all else. However, now Ralph works in a job where he does not make a lot of money and benefits others. How much do you agree with the following statement? At his very essence, there was always something deep within Ralph, calling him to stop prioritizing his financial success above all else, and then this true self emerged.”

The result? The answers split pretty neatly along political lines. Liberals tended to believe that the more socially liberal actions (deciding to make less money and help others) were when people were being true to themselves, and conservatives tended to believe that socially conservative actions (renouncing homosexuality) were more authentic. So! That solves the case, no? Everyone thinks they’re right, in philosophy as everywhere else in the world.

Maybe that’s true; maybe what matters are our opinions more than our choices or our biology. But while I may be biased, I can’t help but think that the long, long history of blood and tears that defines being gay in America (and also that of religion, if we’re being honest) that this is a little more complicated than elephants and donkeys. Maybe it’s not very sound experimental psychology, but I have to wonder: has anyone ever questioned whether being straight was their “true self?” Not to be overly simplistic, but I feel like if the issue at hand were the conflict between being heterosexual and being, say, a theater major or a rugby player, the answer to this question would suddenly seem a lot clearer.

Or, to put it another way, there’s Mark Pierpont, who now says of himself: “It took years of painful struggle, but I have learned: You may be able to change your behavior. You might even be able to valiantly gain control over your thoughts. But you can never change who you really are.”