IT’S A THING. IN FLORIDA. The state attorney general has chosen not to appeal the ruling that struck down the gay adoption ban, which means that the homosexual adoption spree can theoretically begin any moment now. Where is Anita Bryant. I want to see a reaction shot from her, or possibly have her put into a reality-TV-show style confessional so I can savor her rage and confusion. 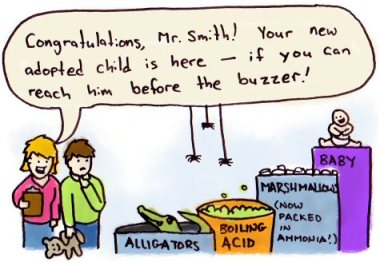 This is exciting news for gay couples who have been considering adoption or are in the process of trying to adopt, but possibly even more exciting for the thousands of children languishing in an overflowing foster care system. Their pool of potential adoptive parents has just widened to every couple who wants to raise a child, not just those parents who enjoy penis-in-vagina sex!

Since the tentative lifting of the ban, Broward County agencies received more than a half-dozen calls from openly gay and lesbian residents, said Sasheika Eugent, a spokesperson for Childnet, Broward’s foster care and adoption agency. Miami Dade County and Palm Beach County agencies said they hadn’t yet tracked those calls.

At any time, there are about 950 children available for adoption in Florida, with about 19,000 in foster care.

Those of you playing along from home may have noticed that Gaga tweeted she was giving her first interview on her new album, Born This Way. And now we have kind of garbled and unclear footage of that interview with Anderson Cooper, which is virtually impossible to understand but which may include her saying that Born This Way is her “magnum opus.”

When was the last time you watched Sesame Street? Yeah me neither, but apparently we should be because they’ve been very gay and very fashion lately. For instance, True Blood parodies, appearances by Neil Patrick Harris and Wanda Sykes, and a tenuously gay-sounding tweet by Bert! Which, I mean, really? Bert has a twitter account?

Apparently going braless is “in” right now, and ONTD seems to be of the opinion that this is a bad thing. Discuss.

This is for all you people who are still watching the Parminder Nagra/Keira Knightley parts of Bend It Like Beckham on repeat. Knightley is considering a role in The Children’s Hour, a play banned in the thirties about two schoolmistresses accused of a lesbian affair. Unfortunately it’s being produced for the London stage and not as a moving picture show but still, there will probably be stills released like that time Daniel Radcliffe did Equus, so. (@telegraph)

Is she gay? Someone on the internet wants to know. (@foreign)