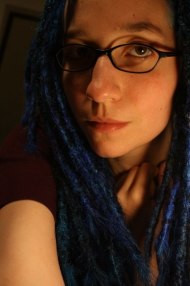 Feminist Hulk, the enthusiastic Twitter Monster who SMASHES PATRIARCHY for 45,000 followers, has revealed his identity to Ms. Magazine. Obviously.

FEMINIST HULK actually did his first Ms. Magazine interview in June along with his “literary life partner,” but no hints were made at that time as to the HULK’s true identity. From that interview:

feministhulk: HULK HAVE PENIS, IDENTIFY AS MALE, SO HULK COULD BE CONSIDERED CISGENDER. HOWEVER, HULK DELIBERATE IN CHOICES, RESIST PRESSURE TO NATURALIZE OR PRESCRIBE GENDER SCRIPT. SO, HULK COULD BE GENDERQUEER. DEFINITELY HAVE GENDERQUEER POLITICS.

J: While I won’t reveal my gender identity here (I think the followers have more fun trying to guess), writing Hulk feels like a genderqueer practice. Slipping between my voice and his highlights to me the performativity of genderplay. My literary life-partnership with Hulk, while nonsexual, is thoroughly queer.

But this new interview isn’t with Feminist Hulk — it’s with Jessica Lawson, a 28-year old Smith alum who described herself to Ms. as a “white, vegan, queer, woman-identified female.” Lawson is currently an English Lit PhD candidate at the University of Iowa and she just had a baby and right now the baby is wearing “a Batman onesie and a hot pink cloth diaper.” Surprise! 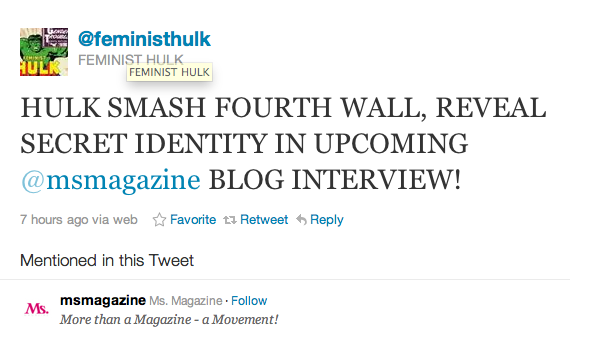 Obviously one of the most delightful elements of FEMINIST HULK was that, just like my head and this website, everything was straight out of the queer feminist handbook. But Feminist Hulk spoke these messages in an aggressive, masculine monster voice that was somehow subversive, funny and effective:

Early write-ups from Salon and Feministing made FEMINIST HULK famous real fast. The Ms. interview discusses the genesis of Feminist Hulk as well as the genesis of Jessica Lawson and her baby who just got born.

How did the idea of Feminist Hulk first come to you?

I used to slip into The Incredible Hulk voice when having online chat conversations. One day, I was talking with my buddy Libby Bulloff about someone’s inconsiderate, entitlement-driven behavior. I suggested that sexism was a contributing factor, and then wrote, “HULK SAYS FUCK PATRIARCHY. HULK SMASH GENDER BINARY. ALSO, HULK THINK JUDITH BUTLER IS THE SHIT.” Libby and I are mutual friends with the writer of @xdressinghulk, and she suggested that I create a Feminist Hulk Twitter page. I had posted to Twitter maybe five times in my life, but for some reason I said, “Give me ten minutes.” I opened the account, made the icon of Hulk holding a copy of Gender Trouble, and here we are!

She went to Smith and just had a home birth — read the full interview at Ms.Magazine.