Hello and welcome to the seventh recap of the third season of Faking It, a show about partial highlights, updos, and blowouts. Today’s episode, as always, is brought to you by MTV, the same channel that brought you The Greatest Party Show Ever.

We do not open on the resplendent lawns of Hester Hippie High School, nor do we open on Karma’s bed, or in Amy’s room, under the boardwalk, out of the sea, or on a blanket with your baby. This opening contains none of those things. Instead, this opening consists of a grainy flashback, narrated by your favorite tomboy femme, Amy, not to be confused with Aimee, a friend of mine in middle school who’s room was so messy that you couldn’t see her floor, which stressed me out really bad. Anyhow! This show! This flashback! Ah yes, summer camp. Like many future lezzers, Amy LOVED hanging out in the woods, surrounded by women wearing practical shorts. 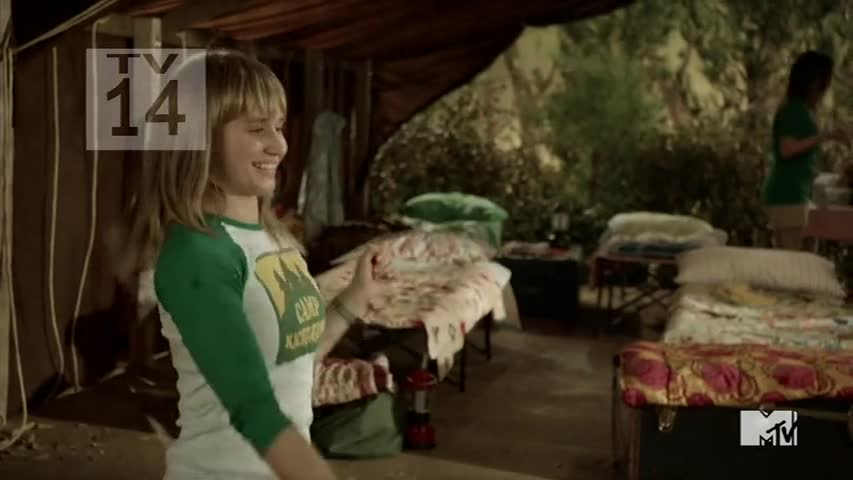 Okay sure we can play ping-pong all afternoon!

Camp Whateveriwawa is where Amy and Karma met Sabrina, who just moved to Austin, much to Amy’s delight and Karma’s apparent dislike. It’s unclear why Karma’s way less enthusiastic about Sabrina’s arrival than Amy is, maybe it’s ’cause Sabrina tells dumb jokes or because her and Amy can’t seem to keep their hands off each other. 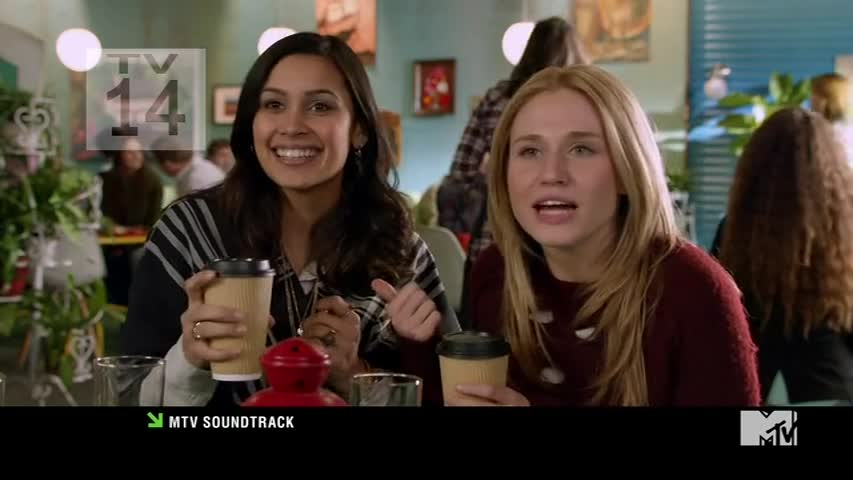 This one time, at band camp, she stuck a flute in her pussy! 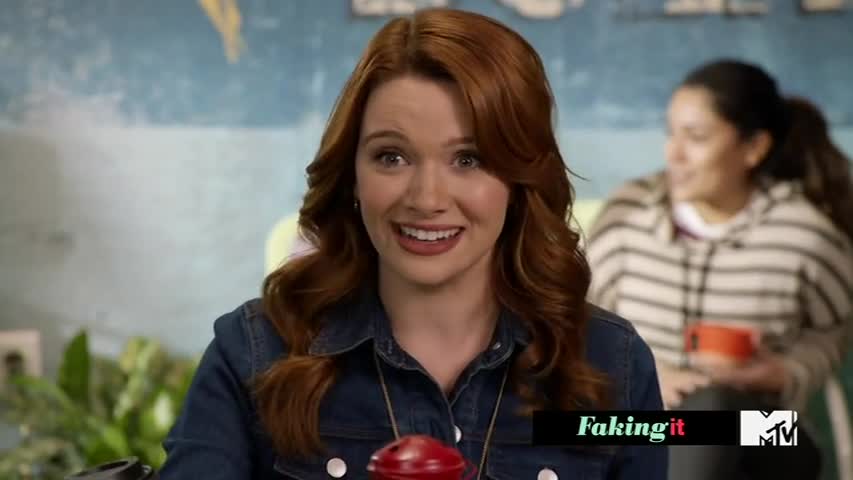 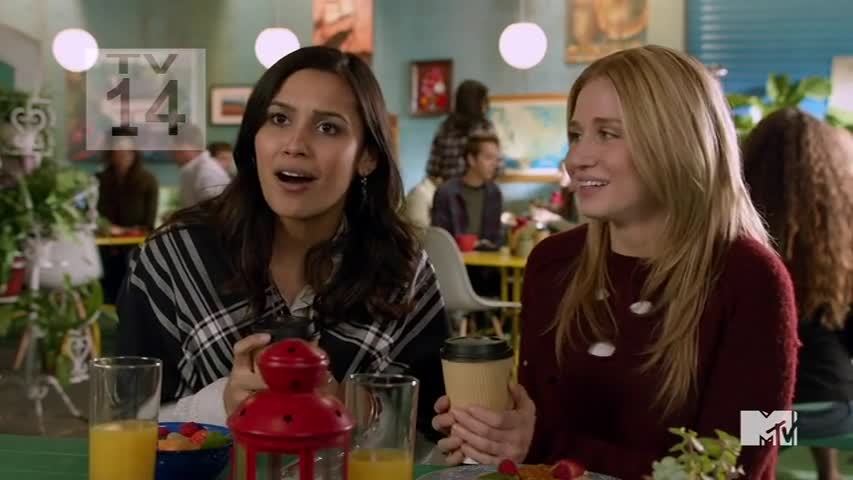 What? You don’t think I know how to get myself off? Hell, that’s what half of band camp is. Sex Ed. 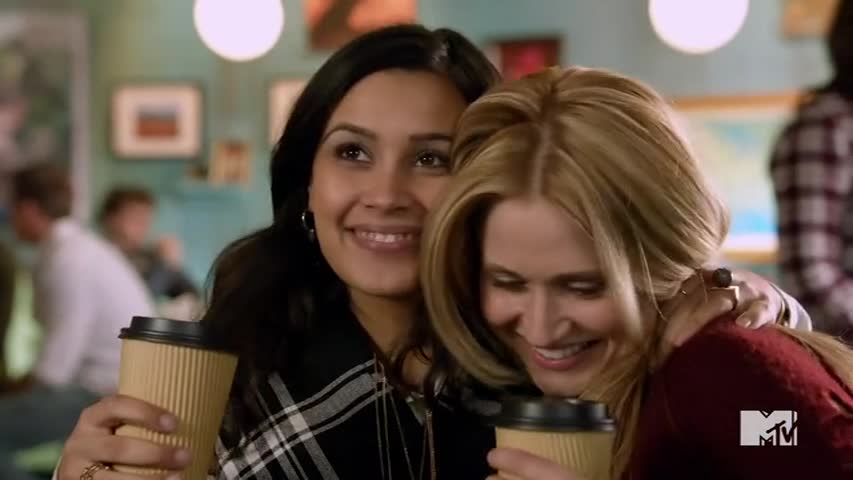 So, are we gonna screw soon? Cause I’m getting kinda antsy.

Lauren’s Bachelorette Pad In Purple: Liam wants to be very helpful! He loves being helpful. He loves getting mugs down off the shelf, and he loves rules, because there were no rules at Shane’s and there are lots of rules at Lauren’s. He loves the nice sheets, the potpourri in the bathroom, all of it, he just loves it! Also, he says something to suggest that Lauren isn’t “fun,” which she takes umbrage with. 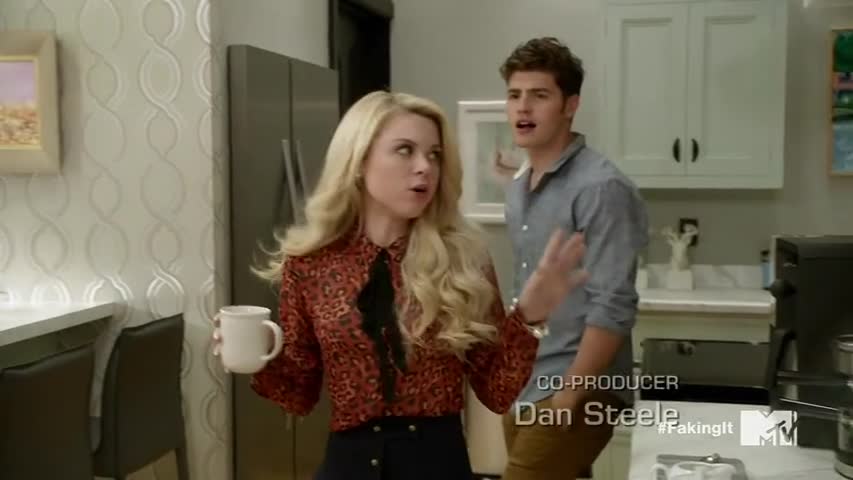 Okay FINE, I’ll drink out of the WHITE MALE TEARS mug if you cannot handle feminism with your coffee.

In fact, if Lauren wanted Liam to move in, he’d be totally cool with it, even though that would mean I’d have to recap his scenes in entirety. Lauren, probably thinking mostly about what this means for me personally, will ponder the offer.

Hester Hooligan High School: Shane’s wondering why Karma’s being so picky and antsy during their casting session for a third band member, and she admits she’s nervous about Amy and Sabrina hanging out without her. Turns out Sabrina, Karma and Amy were not “the three amigas” back at summer camp like Amy says they were. Although Sabrina was charming in Amy’s presence, she was sabotauging Karma at every turn! Striking her with a jump rope, saying mean things, etc. I mean… I think we all know what happens to girls who are irrationally posessive and controlling of their female best friends while they are young… THEY BECOME LESBIANS. 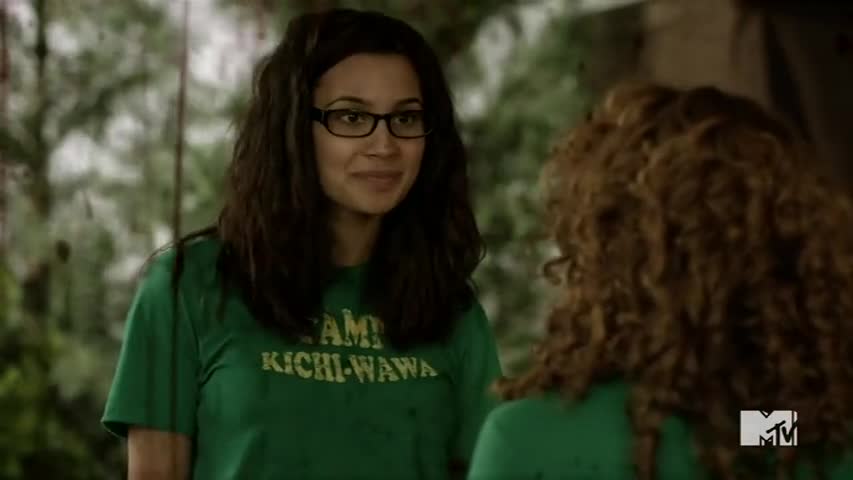 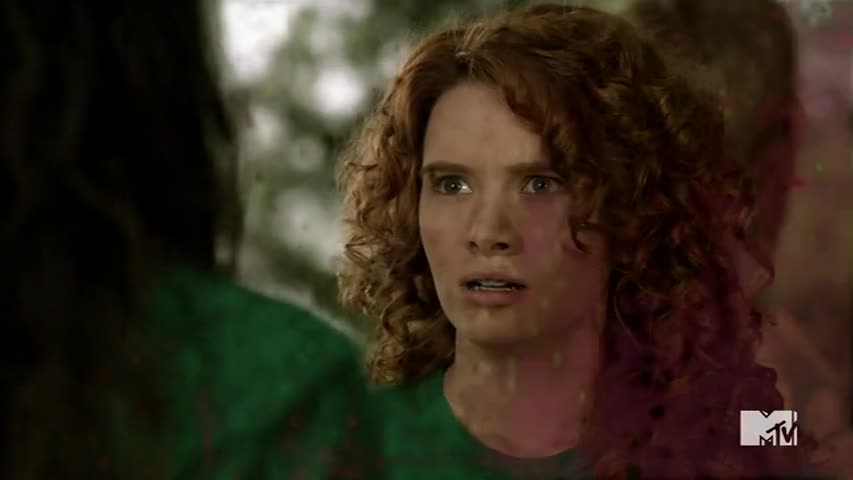 Karma insists she’s not just being possessive! Sabrina is a terrible person, really truly, and she’s just being real. Shane points out that Karma isn’t the same person she was at Camp, so maybe Sabrina has changed too, and Karma reluctantly agrees to give Sabrina a second chance. And look who shows up for an audition: 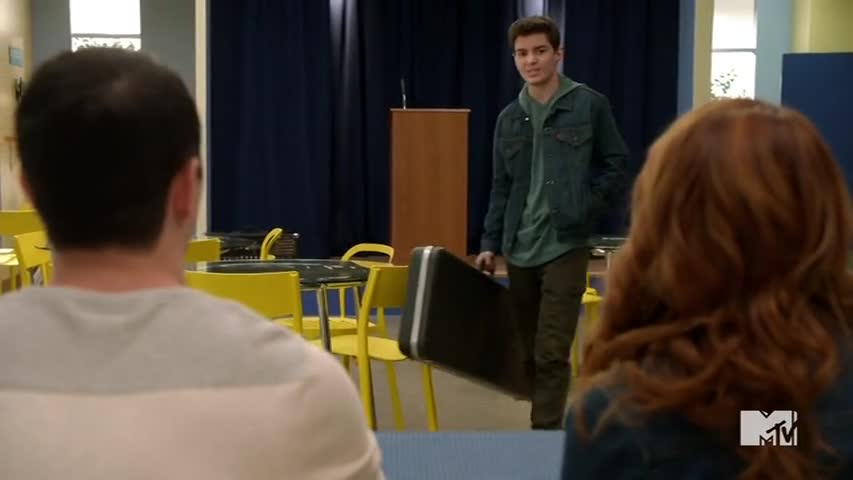 Did anybody here order a giant pizza in a briefcase?

Shane tells Noah that his band is looking for guitar players, not “manipulative back-stabbers,” which’s funny because Shane and Karma are in the band. Karma says if Shane wants her to give Sabrina another chance, he should give Noah another chance, but Shane is determined to Say No to Noah.

Elsewhere in this alleged academic institution, Amy and Sabrina remain inseparable, chatting about days gone by and joking around with Amy’s cool pal Felix, who Sabrina wants the FULL SCOOP on. Like are they dating? Amy says “long story short, nope.” Sabrina asks if there’s another dude-bro in the picture and I mean, thank lesbian Jesus, there is not. “A girl, actually,” says Amy, and Sabrina quickly apologizes, like, “you always talked about boys at camp! I just assumed. Man, that was Republican of me.” 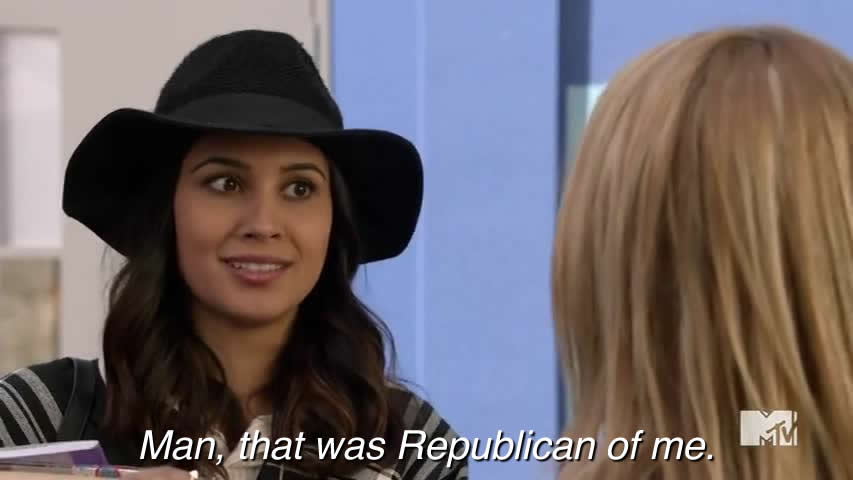 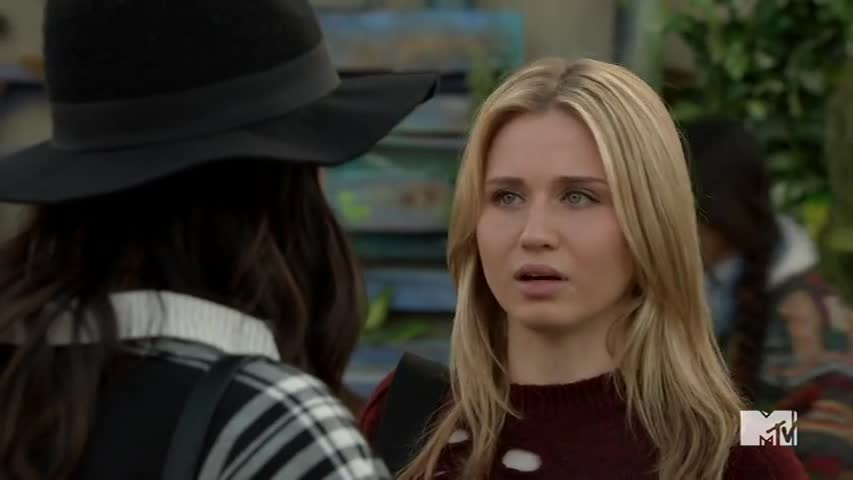 Sabrina, on the other hand, has a long-distance boyfriend. That’ll definitely last! Anyhow, then Karma shows up, doing her very best to be excited about Sabrina and all three of them hanging out together just like the best best friends they have always truly been right? 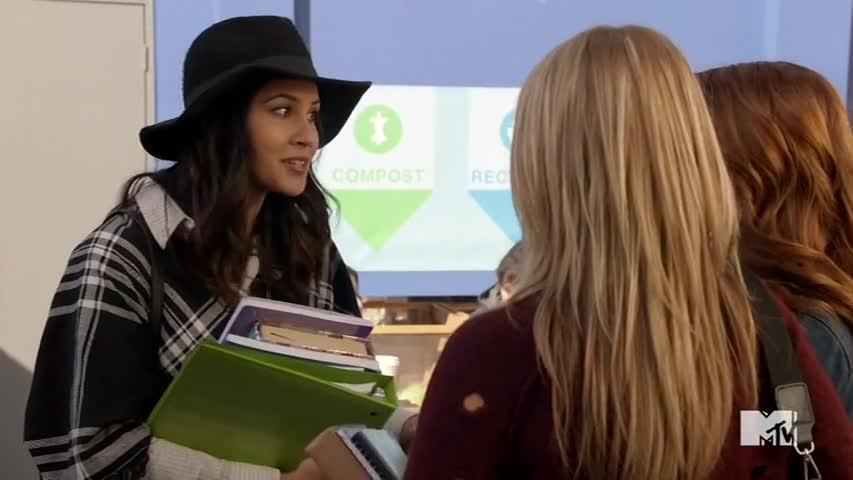 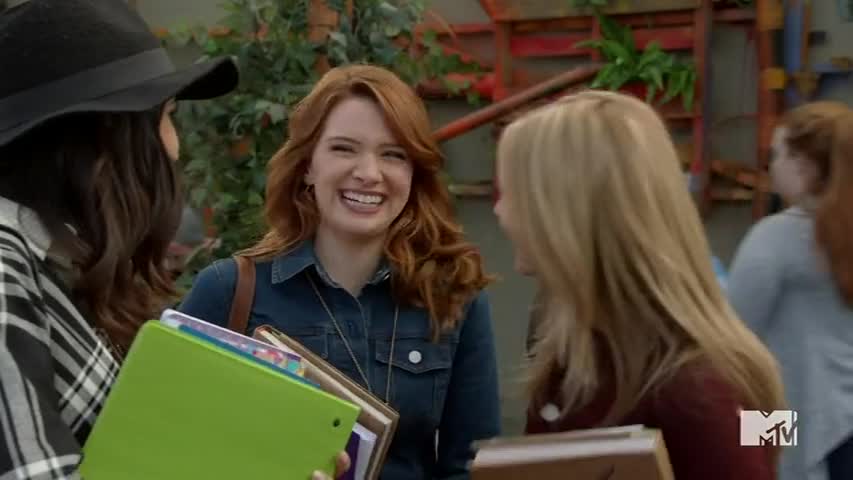 Who me what nooo hahahahah!

Just as the girls are pondering where to passive-aggressively hang that evening, the lord delivers a blessing to their cell-phones in the form of Lauren proving that yes, indeed, she is LOTS of fun: 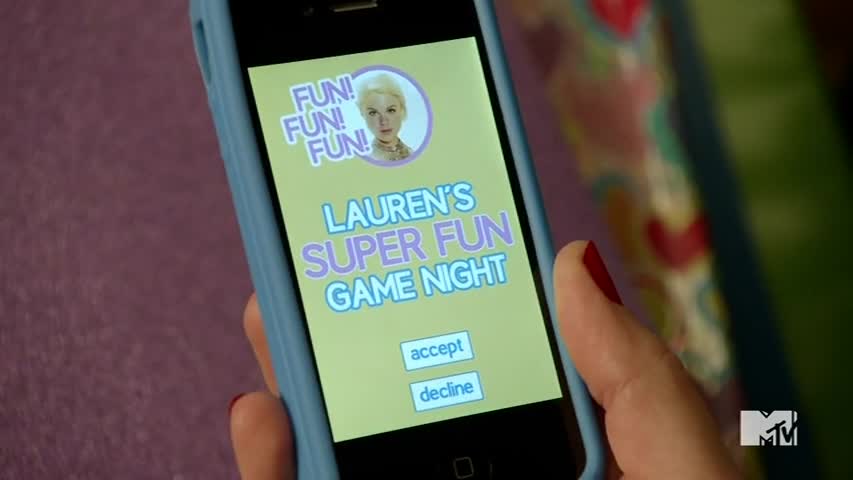 Do you even need to ask

All the invited guests arrive at the fiesta, and are very shocked to see that Liam is now inhabiting Lauren’s apartment, wearing an apron, and is ready to take their coats. 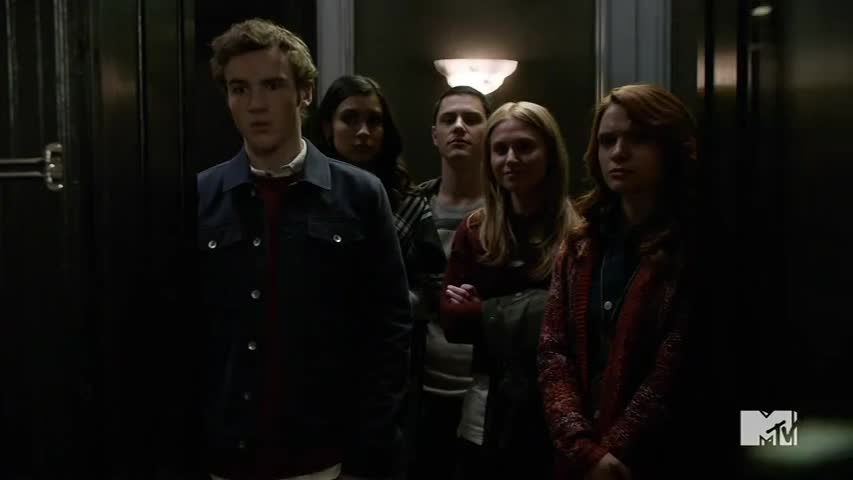 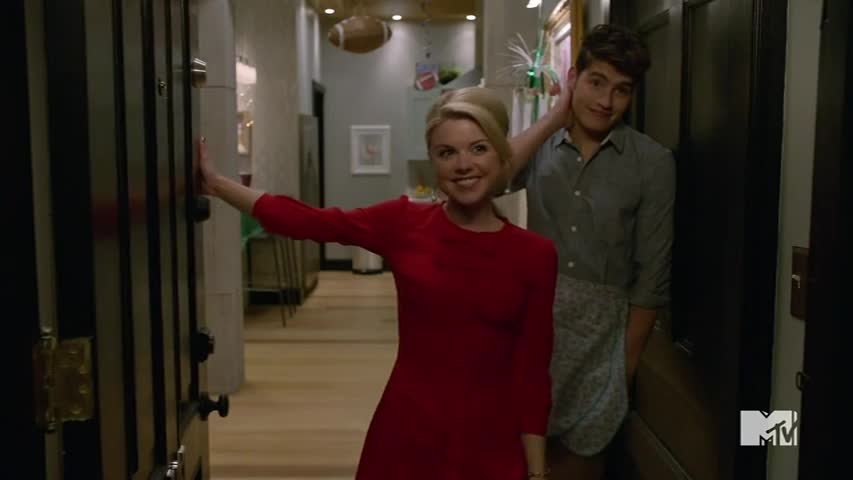 We’re going as Bill and Hillary! 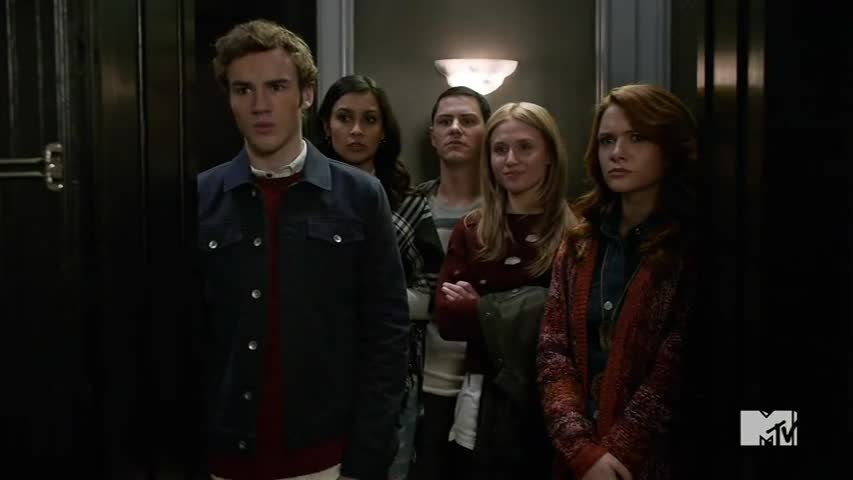 Whoa, sexist Hillary Clinton jokes are NOT cool, you guys.

Also, Karma invited Noah. Also, Karma and Amy both draw red balls from the magic sorting sock, thus putting them on the same team, a situation which draws ire from their potential opponents, as clearly having two soulmates on the same team gives them a very unfair advantage. Thus, Karma’s jetted off to the other team, inspiring Sabrina to joke that her evil plan is working. 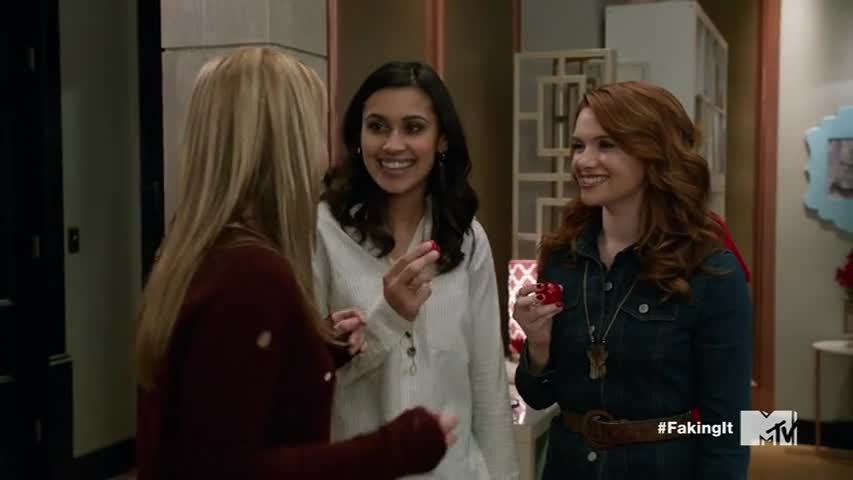 Hell no we’re not sharing our tiny red balls

Game Night is underway, and it’s not going well for Team Blue. Karma’s too distracted thinking about Sabrina and Amy. Liam thinks drawing a circle on a piece of paper is a good way of making people guess “pizza.” 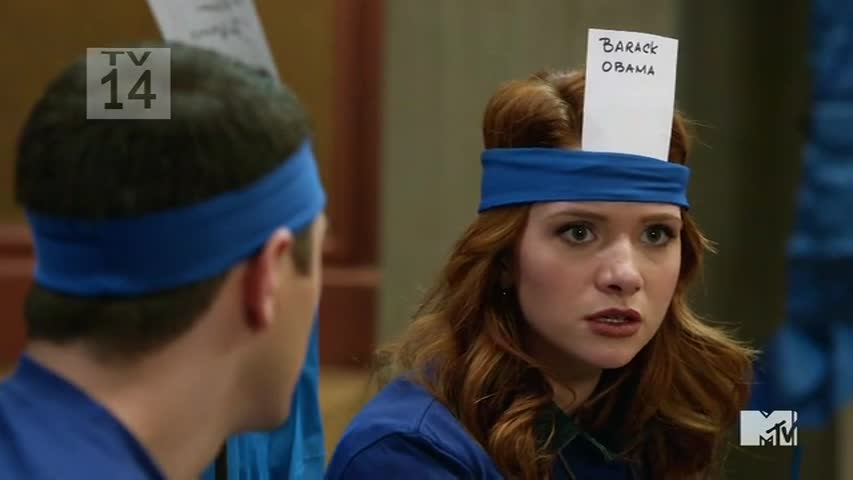 Karma thought she’d be the only one at the party with a Barack Obama hat, but boy was she wrong.

Everybody thinks Liam’s being Lauren’s bitch ’cause he wants them to recycle and was wearing an apron earlier and is being bossed around by Lauren. This offends Liam’s sense of himself as a powerful man, and probably also as a terrible artist. Shane twists the knife further, declaring that Liam is no houseguest — he’s obviously New Lisbeth. Felix, admittedly new to the scene, agrees. “Would New Lisbeth be helping Lauren hold auditions next week for a New Lisbeth?” asks Liam. “Yes, that’s exactly what New Lisbeth would do,” says everybody. 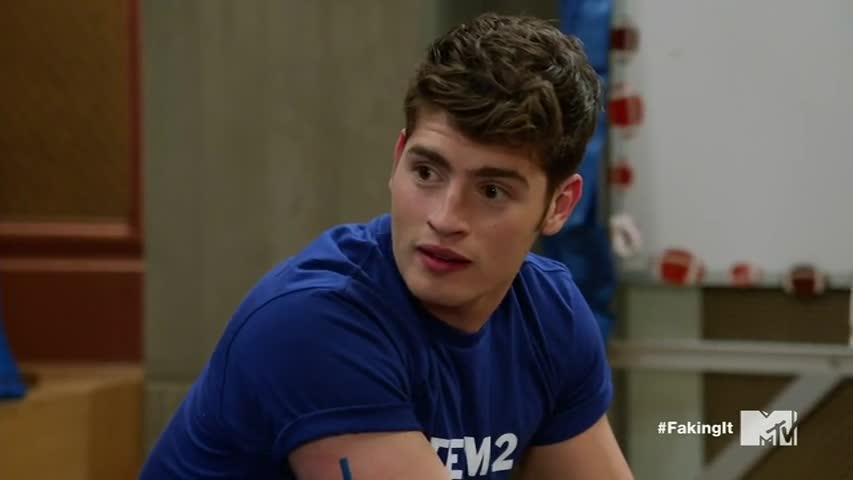 Oh yeah, would New Lisbeth be invited into Lauren’s bed every night for spooning and bedtime kisses? 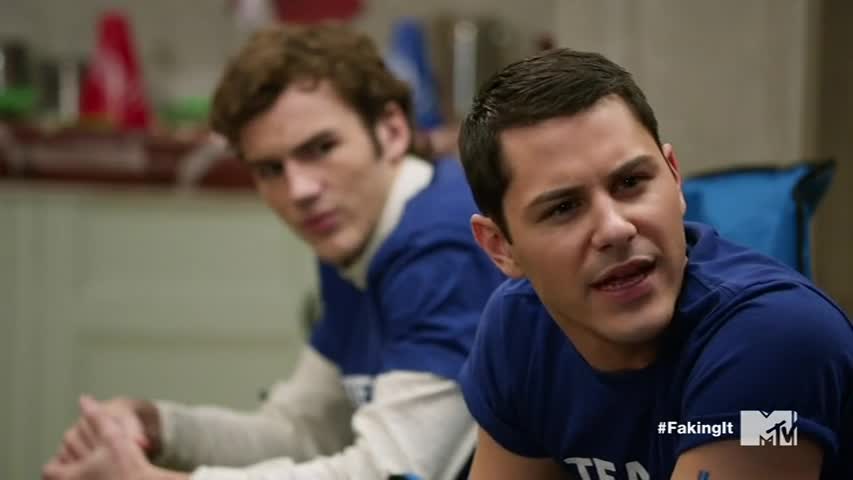 Yes, that’s exactly what New Lisbeth does, did you JUST get here?