Welcome to the fifth recap of the first season of Faking It, a family game show from the network that brought you Celebrity Rap Superstar and A Double Shot At Love With The Ikki Twins. Obviously this recap is AN ENTIRE WEEK LATE. This is because I was at A-Camp last week and my plan to finish the recap at A-Camp was foiled by A-Camp internet completely breaking down!

We open in Amy’s boudoir, where our leading lady is folding clothes and putting them into her dresser in the manner of an extra in the background of a play, when who should show up but… KARMA! 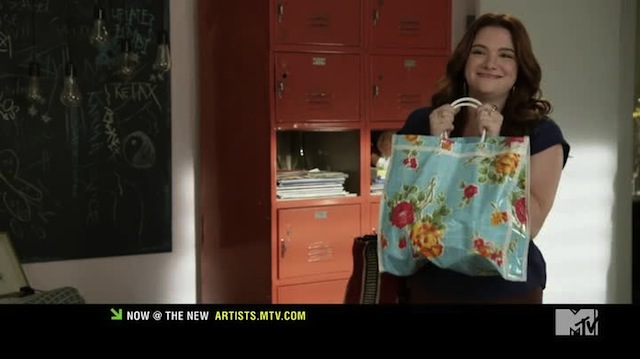 In addition to bringing her nubile bod, Karma’s also brought a re-gifted gift bag full of things that are either terrible, awesome, or terrible/AWESOME: chocolate chip cookie dough, cake frosting and all five Twilight movies on DVD. Karma says they need a “girls’ weekend” ’cause she’s hardly gotten to see her fake girlfriend since they became fake girlfriends and Karma started ramming her tongue down Liam’s enormous facehole. 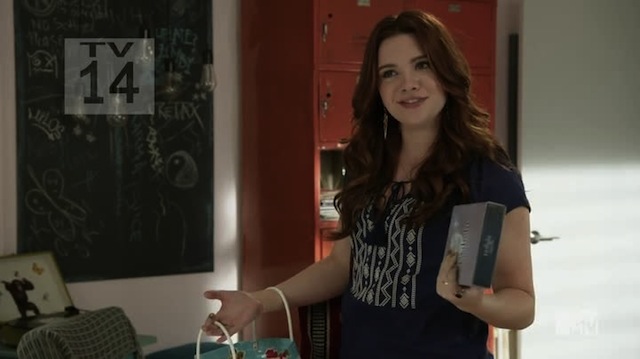 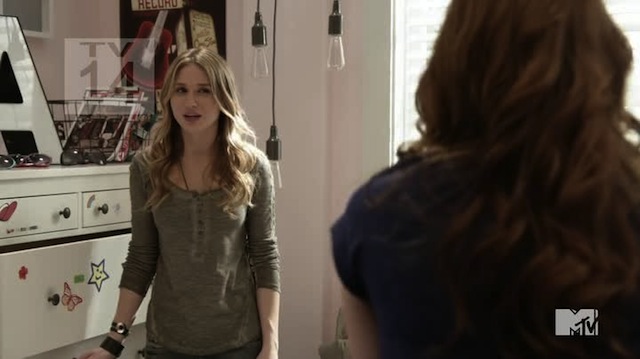 Uh, actually I already own three copies of “How To Fuck In High Heels'”

Amy: “It’s my Mom’s lame bridal shower. Save yourself.”
Karma: “From what? Eating crab cakes and making fun of people with my best friend? And I promise no talking about school, lesbians or Liam Booker.”
Amy: Can you handle the withdrawal?”
Karma: “It’s over between us.”
Amy: “We could talk about that.”
Karma: “Nope! I just wanna spend the weekend laughing at your stupid fart jokes.”

To really seal the deal, Karma turns her phone off, which I guess means no kisses for Instagram this episode. Amy trudges downstairs to interact with her mother, who’s dressed like a rich girl in a ’00s MTV reality series about neighborhoods in California and/or B-list celebrities. 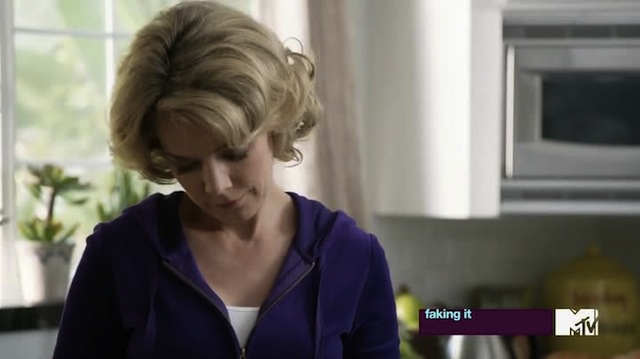 Oh, sweetie I was just thinking how bad could it possibly be? I mean, it’s just one little date and he comes from a very good family… 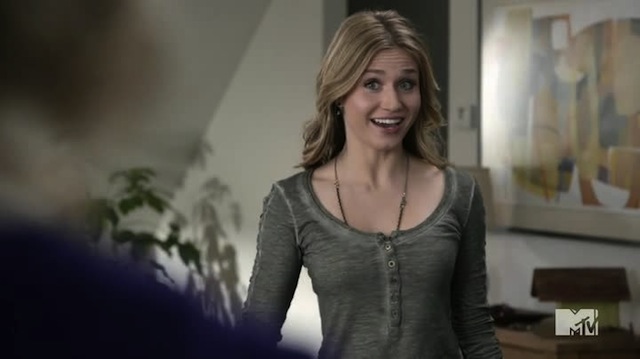 Hey Mom remember the time I told you that I’M TOTALLY FUCKING GAY??! 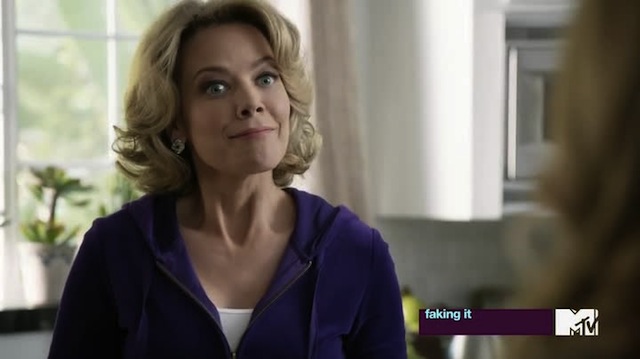 Amy notes the room’s similarity to Martha Stewart’s jail cell. Then Lauren pops in, being bitchy to somebody on the phone, and Farrah’s gushing over how fantastic Lauren is at Bridal Shower Planning. Amy is like, “ugh.” It’s okay Amy, this happens to all of us girls who are shitty at being girls. Your next move is to find a really feminine Type A girlfriend who can play the role of feminine Type A daughter your mother always longed for, while earning you personality points by proxy. Personally I never accomplished this, because rather than fitting neatly into a butch or femme box, I simply embody all the negative aspects of both stereotypes. I can’t do your hair or fix your cabinet. Luckily I have a butch girlfriend for the cabinet even though neither of us can figure out what to do with our hair. ANYHOW WHERE WAS I 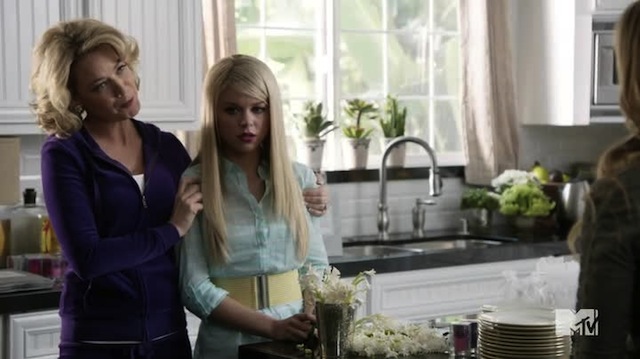 See baby, Lauren’s wearing the gigantic belt I bought her, why can’t you wear yours?

Anyhow enough about me! Amy’s like, are you fucking kidding me, why is she organizing the bridal shower you terrible monsters??!!!  Farrah says that Amy’s been supes busy scissoring Karma and besides Lauren’s the best No.2 a No.1 could ask for, she even ordered one of these croquembouche monstrosities for the party. 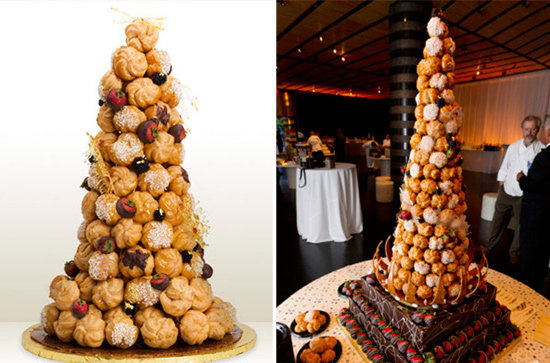 She read about it in In Style magazine.

Amy: “I’m bringing Karma, she’s staying over.”
Lauren: “You know, I’m not sure it’s appropriate if Amy’s girlfriend stays over for the shower. You know it might make our guests uncomfortable.”
Farrah: “Huh.”
Amy: “What is happening?”
Lauren: “I mean, I wouldn’t be allowed to have a boyfriend stay over, would I? It’s a bit of a double standard.”
Amy: “I met your boyfriend! Clearly you have no standards.”

Just as the true and most severe cost of this charade is clouding the sky over their innocent heads, Farrah blithely approves the sapphic sleepover and also orders Amy and her girlfriend to accompany Lauren on her pilgrimage to Dallas to seize the Fancy Dessert From In Style Magazine. 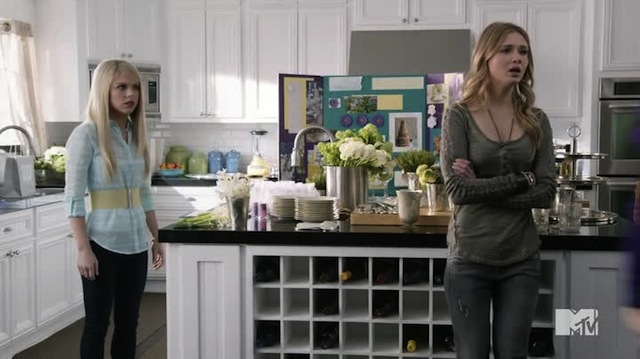 How dare you take our pet bunny to the pond 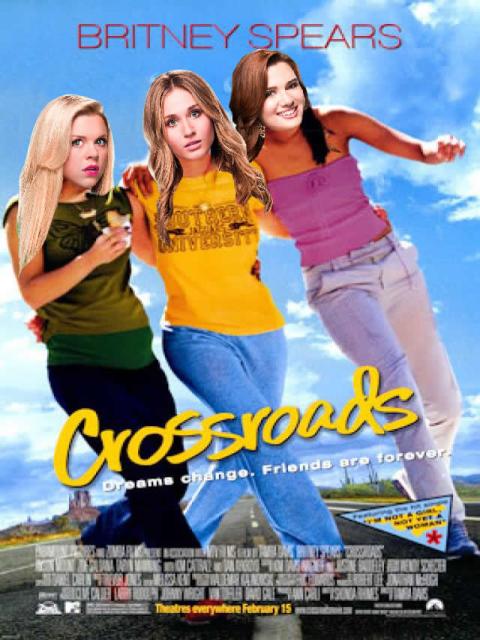 The three lovely ladies are caught in Dallas traffic ’cause Amy and Karma needed to stay home ’til they found out whether or not the lady on the teevee box said yes to the dress or not.

Amy: “I know you’re just sucking up to my Mom to make me jealous, and I couldn’t care less.”
Lauren: “Uh, please! I don’t need schemes to make you jealous. Just a mirror.”
Amy: “OKAY! Who wants to play 20 questions? I love 20 questions! What a Game! 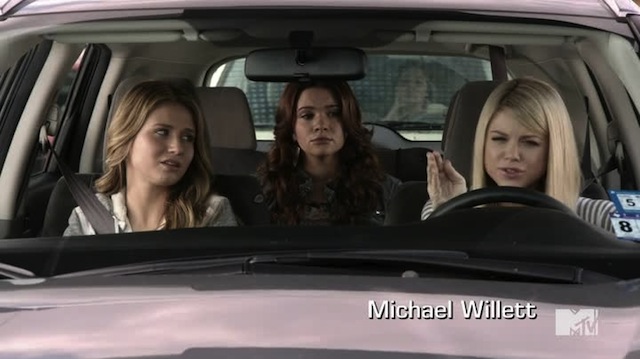 So you’re saying that you don’t actually make a full-on “fist” when you’re making your initial ascent?

Karma begs Amy to chill out, then they play 20 Questions the annoying way where you ask just one yes or no questions and then just start guessing at random. Here’s the takeaway: Amy hates Matthew McConaughey, Bristol Palin and Judi Dench. 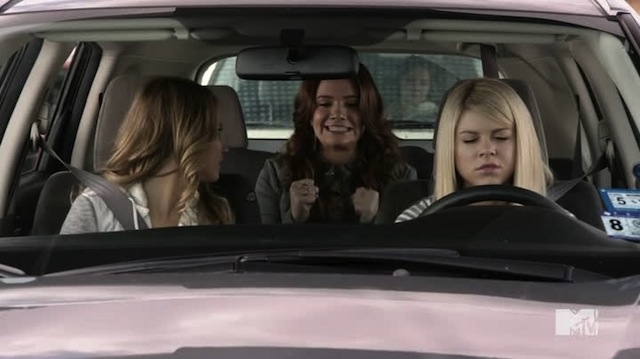 Back in Amazing Austin, Texas, Liam calls Shane to see if he’s up for a “hunting trip.” Don’t worry, they aren’t going to run into the woods and kill bunnies like a pair of wild stallions, they’re going to “hunt” other humans in a love game mating ritual. 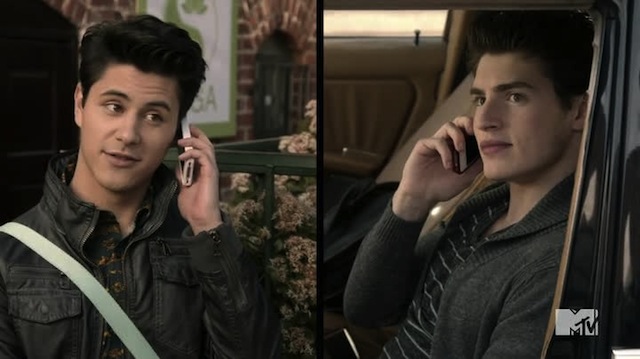 Have you ever considered switching to Geico

Shane: “I’m down for everything except for that place with the mechanical bull. I’m not allowed back.”

Yeah, totally we all remember that time at Autostraddle’s Rodeo Disco 2009 when Shane won a signed Uh Huh Her poster: 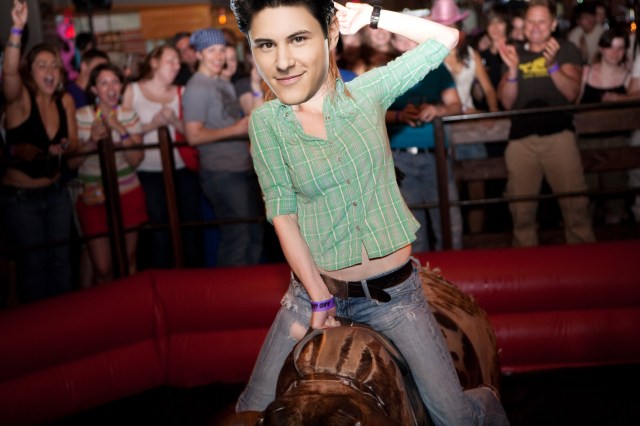 Anyhow, they’re gonna go out and get laid.

Liam: “I know. I’m thinking The Twain.”
Shane: “Are you sure? I’m down with going to a straight bar. I find your people’s mating rituals very entertaining.”
Liam: “Yeah, but gay bars are always filled with straight girls fresh off breakups.”

Good news: Liam is still a douchebag. He’s in the mood for some “mind-blowing breakup sex.” 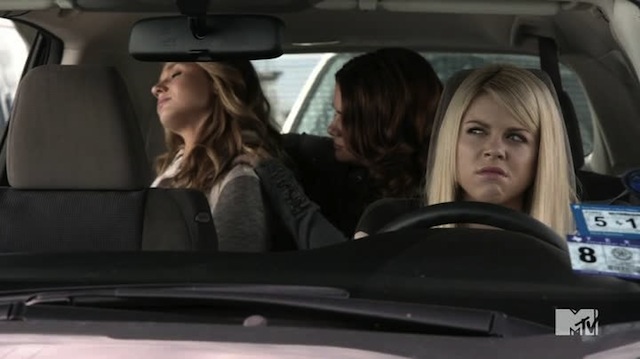 That is some gay-ass shit happening back there you weirdos

RIGHT OKAY. No, I mean hot damn we have some blurry lines in our lives. I mean let’s be real, it’s not just a thing that happens to gay people; a best friendship between two women can sometimes be just about every aspect of a relationship except the sex. 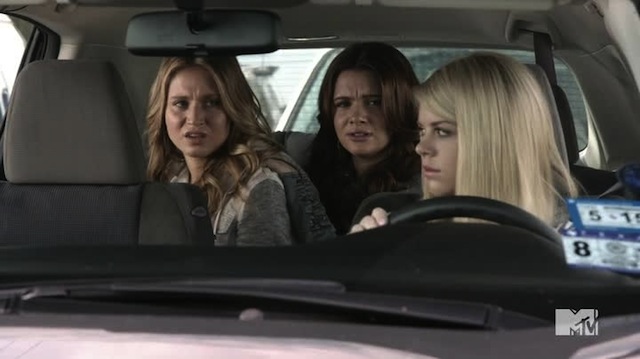 I really wanted Karma to be the one who said “ugh, you wish.” Usually that would be a Karma line. IDK clearly it’s time for me to write for this show.

Hot Girl: “I think it’s so sweet that your best friend is gay. My ex was SUCH a homophobe.”
Liam: “I don’t really see gay or straight, I just see the person.” 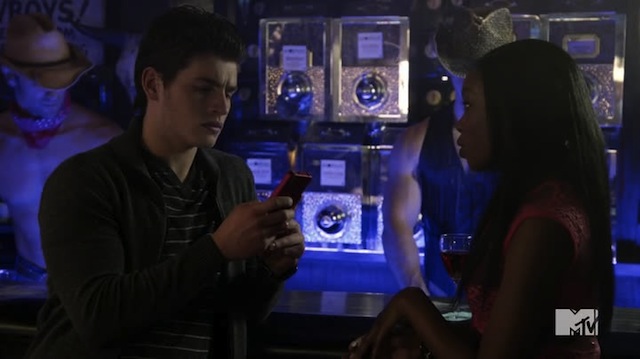 Hot Girl: “OHH, that’s so sweet! And look how well your Shane is getting along with my Nate! That’s adorable.”

Not gonna lie, Shane and Nate are not getting along, SHE’S LYING.

Shane: “So what’s your favorite movie?”
Nate: “My favorite films explore the natural destruction caused by 9/11.”
Shane: “You know what I just realized that my parents are getting divorced and I no longer believe in love, please excuse me.”

Before Liam can seal the deal, Shane pops out the ripcord signal. 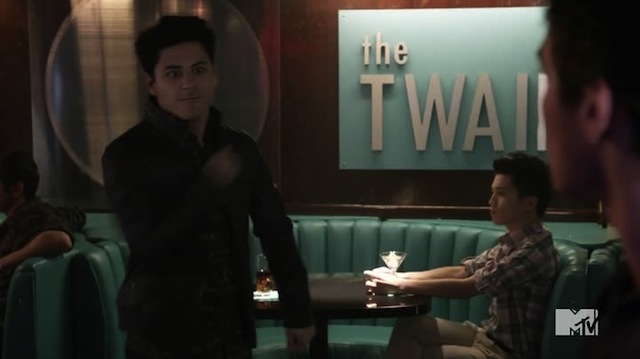 I TOLD YOU this was the guy who started fucknoshane.tumblr.com!

Liam’s irked, ’cause he was about to Lay Some Pipe with a hot girl, but Shane insists the bar is filled with Tragic Humans who are The Worst. But then twins come in and they get excited because that’s what boys do in movies and on teevee shows when hot twins exist. 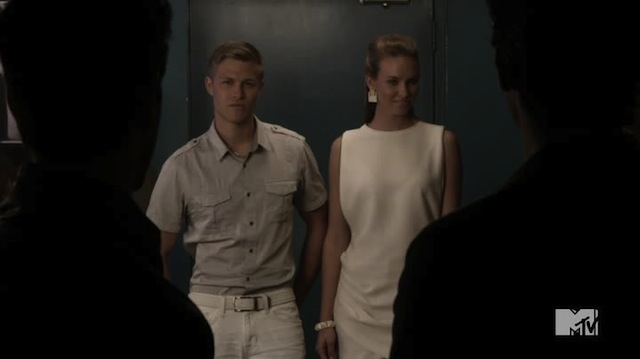 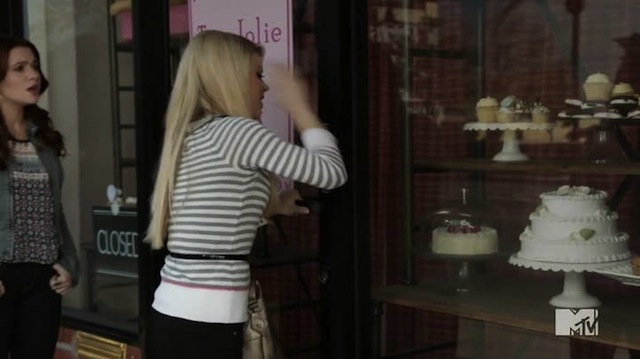 Karma says they can just get a different cake, but Lauren says that for the last time, it’s not a cake, it’s a croquembouche, and Kim Kardashian built a castle out of ten billion croquembouches and then had a baby on it and Jennifer Love Hewitt uses it as a douche and Reese Witherspoon made a gingerbread house out of it and then ate it and then put it in her hair and wore it to an awards show with lots of sugar-high ponies around her and NOTHING BUT A CROQUEMBOUCHE WILL DO, NOTHING WILL BE AS GOOD AS A CROQUEMBOUCHE COULD EVER BE EVER. THE CROQUEMBOUCHE WILL SURVIVE US ALL. 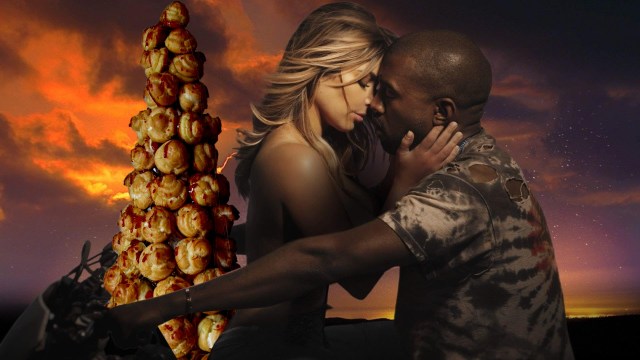 Amy can’t help but laugh, which inspires Lauren to declare:

Lauren: “You are a HORRIBLE PERSON. No wonder your Mom made me her maid of honor.” 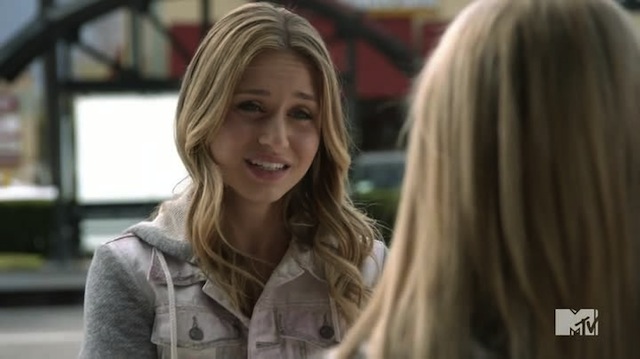 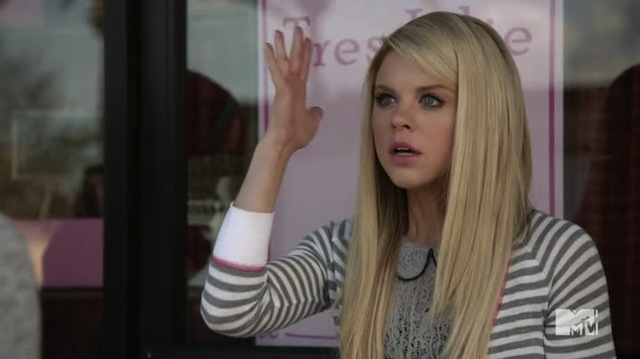