In William Shakespeare’s Romeo and Juliet, Friar Laurence begrudgingly agrees to marry the play’s titular characters in hopes of putting an end to the longstanding feud between the Capulets and the Montagues. In the play’s third act, he says to Romeo, “For this alliance may so happy prove to turn your households’ rancour to pure love.”

It didn’t exactly work as Friar Laurence intended in Verona but what about in modern day Atlanta, Georgia: can love between two children of warring families bring peace? That’s the question being posed on OWN’s new soapy drama, Ambitions, only this time, the couple at the center of our story are two women. 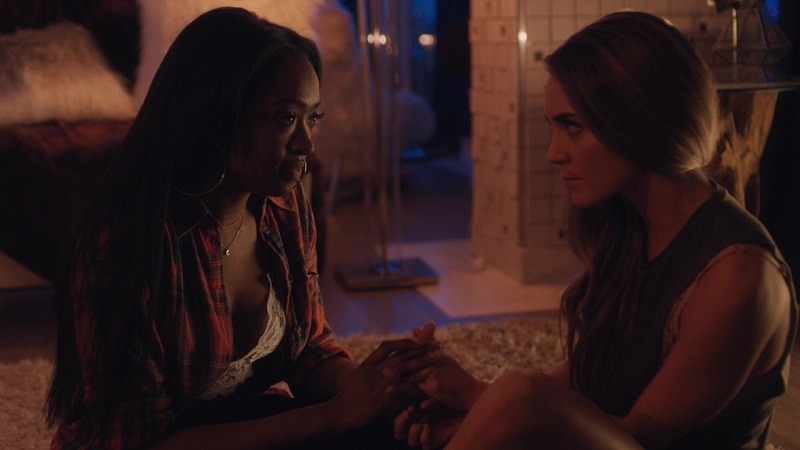 An old story gets a modern day refresh on OWN’s Ambitions.

Carly Lancaster (Kayla Smith) is Ambitions’ Juliet: the privileged first daughter of Atlanta. Her father, Evan, is the mayor and her mother, Stephanie Carlisle Lancaster, is one of the city’s top legal minds. While her mother wants nothing more than to see Carly follow in her footsteps — becoming a lawyer and joining the family’s prestigious firm — Carly’s got her own ambitions: to become an actress. But her mother’s not content to just interfere in her professional life, Stephanie interjects herself in Carly’s personal life too…hoping to build a love connection between Carly and the son of the CEO whose business her father is trying to lure to Atlanta.

“There is no future with me and Khalil,” Carly tells her mother, without being completely honest about how true that statement is.

Lori Purifoy (Christina Kirkman) is Ambitions’ Romeo Romy: the young head of public relations at Purifoy Pharmaceuticals. The company’s being sued by Stephanie Lancaster’s firm, again, and it’s Lori’s job maintain the image of the company in the wake of it all, despite being hamstrung by her father — a self-proclaimed “old cracker” — and the company’s new lawyer.

When she meets Carly for the first time — a fundraiser to combat the opioid epidemic, no less — and, after exchanging barbs about their family’s legal battles, things turn personal. Lori grabs Carly’s phone and inputs her number, for when Carly wants “to have a deeper conversation about living one’s truth.” It’s clear, though, as Lori draws Carly in and runs her tongue against her lips, that whenever she and Carly cross paths, there won’t be that much talking going on.

Originally, I was getting Marina from The L Word vibes from Lori — manipulative slightly older woman who likes to toy with impressionable young women — but last week’s episode, where Lori shows up for Carly in a big way, had me second guessing myself. Is Lori using Carly or is there something real going on between them? I don’t know…but if this clip, exclusively provided to us by our friends at OWN, is any indication, we’re well on our way to find out.

I’m pretty sure Stephanie Lancaster’s face is the “And I Oop” meme come to life. I cannot wait to see what happens next and if our star-crossed lovers can overcome all the roadblocks that are about to be tossed in their way. Can the alliance between Carly and Lori turn the rancour between the Carlisles and the Purifoy’s into pure love?

New episodes of Ambitions air Tuesday nights at 10PM on OWN: Oprah Winfrey Network. You can binge the show’s first five episodes, right now on the WATCH OWN app.

Natalie has written 269 articles for us.