Happy Friday! Here are some boobs on your tubes!

BUT WAIT! Before you do anything else, hop on over to AN EXCLUSIVE BATWOMAN CLIP that we got from the CW where Ryan and Sophie talk at each other with their faces real close. Are you back yet? Is your shipper heart full? Great! We’re glad to have you.

On Drag Race, it was the Rusical and if you’re the kind of former theatre kid who loves Broadway puns, well boi does Drew have a recap for you! Nic is back on that Batwoman beat with a reminder that All Crows Are Bastards. (This episode also pairs surprisingly well with this week’s Good Trouble, which shines a worthwhile light on the problem with cash bail and Natalie is the exact voice you want to read on this, trust us.) Ah yes, on Riverdale it’s time once again for the highs and lows of football, for Kayla sometimes it’s the comfort of routine, you know? And Sally’s here with a real hot take, the great pottery throw down is (gasp!) better than bake off!! Can it be?

We also had some stellar film coverage this week. Kayla grappled with I Care A Lot, which is hard to do with a movie that’s vacuous in its portrayal of money-hungry monsters. Xoai did beautiful, smart coverage of the new documentary Trans in Trumpland: first in review, and then in a taped interview with creator Tony Zosherafatain and executive producers is Chella Man (she also transcribed, captioned, and uploaded the video to YouTube herself, so please give it a watch!) 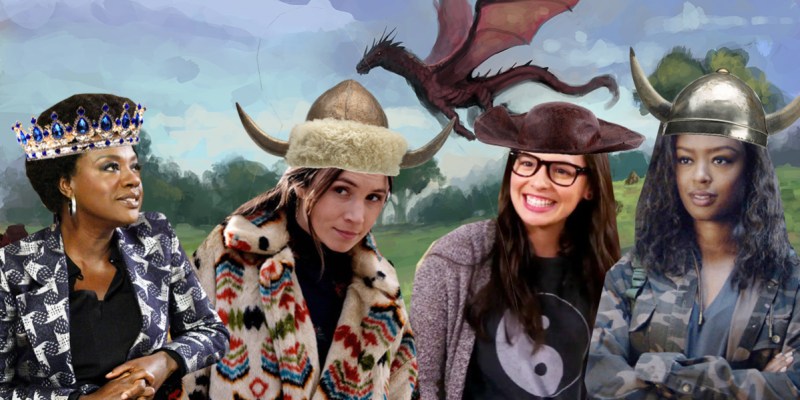 Harley Quinn may think she’s chaotic evil, is actually chaotic neutral. So there.

Oh and did we mention that Valerie and Meg turned our favorite lesbian and bisexual TV characters into D&D classes? Yeah, we thought you might like that.

+ Y’all I DEVOURED the new Netflix series Ginny & Georgia and will be coming at you fast with a review of it early next week so spend this weekend catching up so we can talk about it, okay? Okay. — Valerie Anne 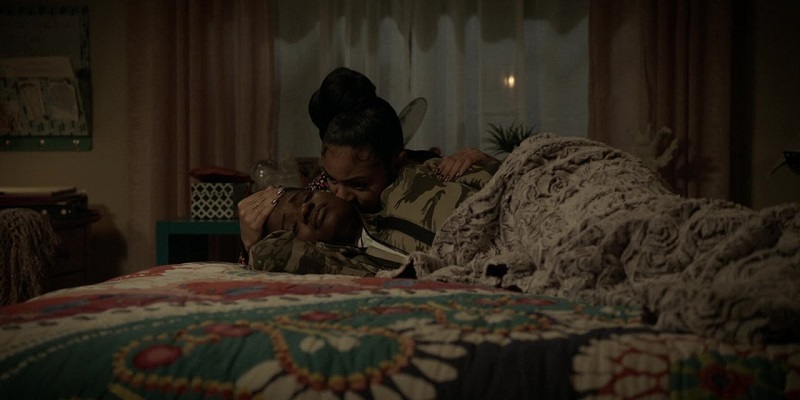 No matter what love connections have happened on All American — and many of those are showcased in this week’s episode — the show’s truest love story has been between a football star and his lesbian best friend and now, for the first time, that relationship has been fractured. In hopes of mending their broken friendship, Coop shows up at Spencer’s house early in the morning to talk things out only to discover that he’s decamped to his father’s cabin. His mom assures Coop that she and Spencer both made mistakes but they’re both so dedicated and loyal, they’ll eventually find a way to heal from this fight. Coop’s not so sure: The look on Spencer’s face when he blamed her for the shooting… maybe there’s no way back from that.

Later, Patience urges Coop to follow Spencer out to the cabin, partially to talk but mostly to support him as he visits the cabin for the first time since his father died. Coop takes Patience’s advice but when she arrives, she discovered that all of Spencer’s Beverly Hills friends had the same idea. Spencer tries to explain but, this time, Coop’s going to do all the talking.

“That night at the hospital, you told me the shooting was not my fault,” Coop reminds him, forcefully. “Now, all of a sudden, you and this Beverly Hills therapist decided it’s easier to blame me?!”

She points out that he’s constantly inserting himself into her life — trying to save her — but she never asked him to do that. In fact, all she ever wanted was for him to believe that she could save herself. It wasn’t Coop that got him shot, Coop maintains, it was Spencer’s own incessant need to play hero. It’s hard to pick a side in this fight — they’re both right and they’re both wrong — but one things for certain: it’s elicited great performances from Daniel Ezra and Bre-Z. Easily some of the best acting of Bre-Z’s career.

Spencer wonders where this revelation leaves their friendship and Coop suggests he do what she told him to do when he left for Beverly: forget about her. Coop returns to Crenshaw and allows Patience to comfort her as she mourns the loss of her best friend. But what Coop doesn’t realize at that moment is that she’s about to lose someone else: Patience. To make amends for unwittingly stealing Patience’s song, Lil’ Jewel invites her on tour and from the looks of the suitcases stacked in the corner, Patience accepted the offer. 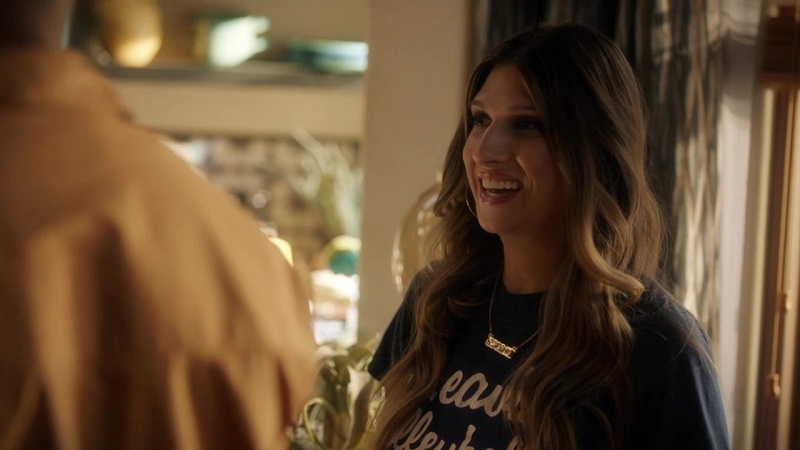 One of the interesting things that grown-ish has delved into this season has been the different ways in which young people get “grown-ish.” Everyone has a different path to becoming the person their meant to be — sometimes that includes college, sometimes it doesn’t — and it’s inspiring to see those paths represented. This week on grown-ish, Nomi returns to Cal U and we get a small glimpse into the person motherhood has shaped her into being.

At first, not much seems different: she downs mimosas while celebrating with her girls and gladly hands off responsibility for Baby Luna to Junior when he offers. But when a fight breaks out between her friends over Vivek’s Molly-induced threesome — during which Vivek kissed another guy, leading Aaron and Doug to call him gay — it feels like a wiser, more mature Nomi steps forward. Gone is the girl from the first season with the internalized biphobia; instead, Nomi sees the situation for what it is: homophobia stemming from ignorance and toxic masculinity. She calls the group out on their misstep and sits Aaron down to explain it in a way that he seems to grasp.

But while I should be thrilled to see a forthright discussion of toxic masculinity, I found myself unsettled by the entire episode. Though we’re treated to a more mature Nomi in the episode, we’re subjected to the same bigoted rhetoric from Aaron that we heard two seasons ago. Beyond that, like so many other shows, grown-ish doesn’t want any its characters to be seen as bad, but if a character’s resorted to the same bigotry over three years, isn’t he bad? Shouldn’t it impact the way he’s seen, especially by Nomi but also by the audience? Shows that treat homophobia, misogyny or racism as aberrations that can just be gotten over after sharing a hug and a slice of cake do a disservice to all those actually have to confront those issues.

Nancy Drew 206: “The Riddle of the Broken Doll” 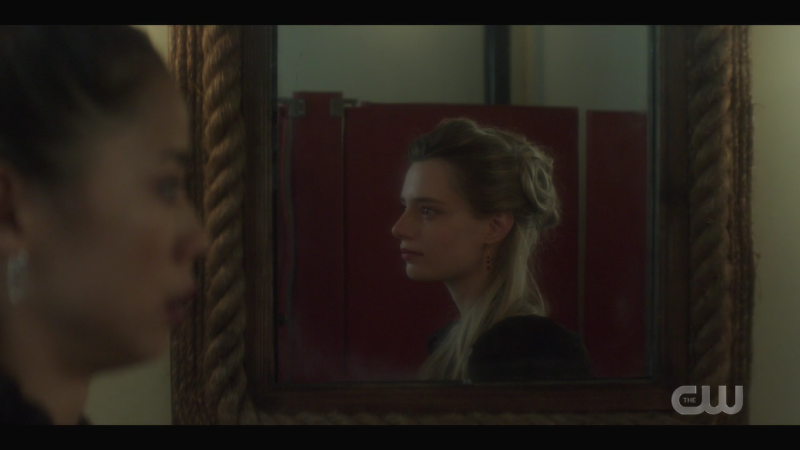 This show continues to surprise and delight me. Even the camera work is next level. LOOK AT THIS SHOT.

This week, having escaped the death curse and seemingly conquered the Aglaeca, the Drew Crew realizes they felt aimless without a mystery to solve so they surprise even themselves by being excited when a dead body falls into Nancy’s lap. Well, technically it falls out of a cupboard but same difference. The team works together to solve the mystery (caused, mind you, by Nancy unleashing untold hell when she ransacked the museum for the shroud that brought George back to life) and uses some helpful kid ghosts to stop a demon from taking human form.

It’s a hilarious and spooky episode, throughout which George finds herself losing time here and there. During one such instance, Nick asks her if she was singing in French with surprise in his voice, having heard her butcher the language before, but George has no memory of doing it. At the end of the episode, however, George finds herself face to face with the lesbian ghost she seems to be possessed by. Look forward to seeing what exactly Odette is up to!

Black Lightning 403: “The Book of Reconstruction: Chapter Three: Despite All My Rage…” 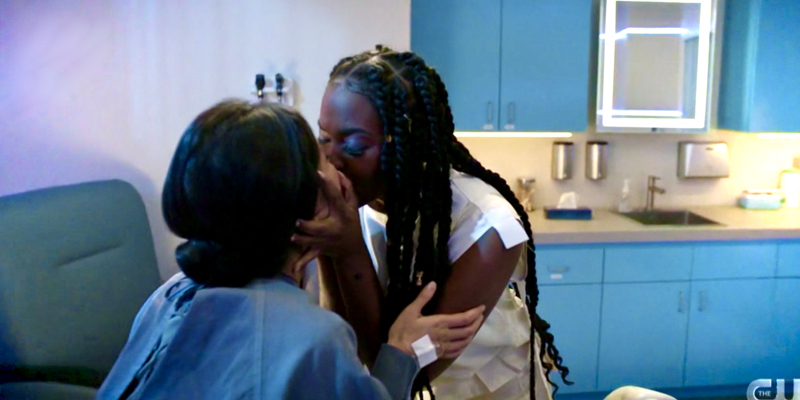 Grace Choi is finally awake again. She’s also a married lady. Life comes at you quick on Black Lightning — years of underdevelopment and then boom! All at once!

Last season Anissa and Grace were engaged to be married right before Gravedigger came to Freeland and the war with the Markovians, and then of course Gravedigger showed up juuuuust as they were walking down the stairs in their matching white silk suits (see, what did I say about underdevelopment?). The supercharged girlfriends put their nuptials on hold for the fight, which was actually a lot of fun! Until it wasn’t — Gravedigger used his mind control powers to turn Anissa and Grace on each other, and in defending herself Anissa unintentionally put her fiancée in coma. Which brings us today.

It’s been a year since the war, and Anissa still visits Grace’s hospital bed every day. Her sister is worried for her mental health, but Anissa won’t stop. She loves Grace and forever means forever, you know? And there Anissa is, cleaning Grace’s legs and telling her about her day (a very sweet moment from Nafessa Williams in a role that doesn’t often allow for those quieter beats) when she breaks down in tears — she can’t keep doing this, she prays for a sign. And that’s when Grace’s heart monitor goes off.

Anissa sucks all the room’s air into her lungs, fearing the worst. Just as she’s bracing to say goodbye, Grace literally changes her spots. Her signature leopard flashes across her legs, then she coughs, and suddenly, over a year later, Grace Choi is awake.

You’d think that Anissa and Grace would have something to say to each other after all that trauma, but nah Black Lightning likes to save character development for the straights, so instead when we next see the couple together Anissa has brought her friend Darius in to marry them. Once upon a time, Anissa promised Grace that nothing in the universe would tear them apart, and she’s not waiting any longer for the universe to have more chances to prove her wrong.

But what about Anissa’s family? The notoriously close Pierces apparently just have too much on their plate to be their for the hospital bedside wedding of their only daughter. Because sure, that makes sense! Grace at least pauses for a minute with trepidation before deciding “secret marriages are sexy” and agrees to go ahead.

And there you have it, kids! I know that Anissa Pierce is traditionally impulsive, but c’mon! This was A LOT to ask of any audience to believe. I quite simply do not remember the last time I was so actively under-impressed with a lesbian wedding of all things, but here we are.