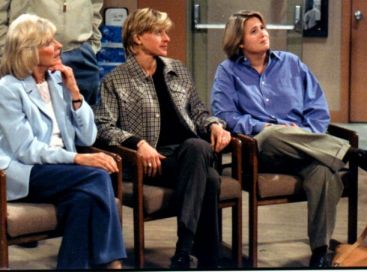 Last week, in response to GLAAD’s latest “Where We Are On TV” report, I’d lamented the lack of lesbian-led network comedies on our slate this season— I mean, considering the runaway success of gay sitcoms Will & Grace and Modern Family (and the upcoming program Sean Saves the World and the terrible-and-now-cancelled-thank-goddess show The New Normal) and the runaway hilariousness of lesbians in general, lezzers are definitely overdue for our moment to shine in prime time. Historical evidence suggests that should such a show appear, it would likely be penned by a lady-loving-lady already working in Hollywood, and today that special someone was revealed to us: Ellen DeGeneres, the last lesbian to bring us a network sitcom about a lesbian, will now also be the NEXT lesbian to bring us a sitcom about a lesbian! She’ll be working with writer/executive producer Liz Feldman (former star of This Just Out, former writer for The Ellen DeGeneres Show, present write for 2 Broke Girls), who is already very popular with the ladies.

Warner Brothers TV is producing the show with DeGeneres’s studio-based A Very Good Production, and what we know about the plot thus far is that it will center on “a lesbian and her straight male best friend who get pregnant just as he meets and marries the love of his life.” I think that’s three lesbian television tropes already and it doesn’t even have a title yet!

This isn’t the first time in recent history we’ve gotten really excited about a new lesbian sitcom in development, but hopefully this particular sitcom will actually make it to our television sets. In 2009, it was announced that lesbian comedian Carol Leifer (The Ellen Show, Rules of Engagement, Seinfeld) was developing a show for CBS called “You and Me and He,” which “centers on a recently divorced woman who enters a gay relationship only to find out that she is pregnant with her ex-husband’s baby.” The show never panned out. In 2011, Robert Greenblatt took over NBC and immediately picked up a Jhoni Marchinko (Will & Grace) pilot called “I Hate That I Love You,” a “single-camera romantic comedy in which a straight couple introduces two lesbian friends to one another, eventually leading in a pregnancy.” Anna Camp (True Blood, The Good Wife, The Mindy Project, Pitch Perfect) was set to star, but NBC passed on the pilot.

Will we ever see the birth of this particular baby? I don’t know, I have a pretty good feeling about it!