We’re in the front of the parade behind Pam Ann, waving our flags and yelling. Later there’s speculation that Pam wasn’t given a mike, unlike Ian McKellen last year, ’cause they thought she might say something really raunchy. 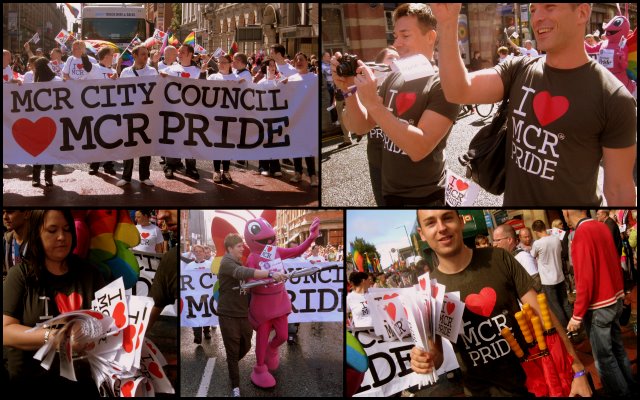 We dip out about 25% of the way through the parade route to watch it from a perch upon a hill, where I eat hot greasy thick “chips” from a food stand and take crap photos I imagine I’ll discard in favor of stealing somebody else’s good photos from the internet. 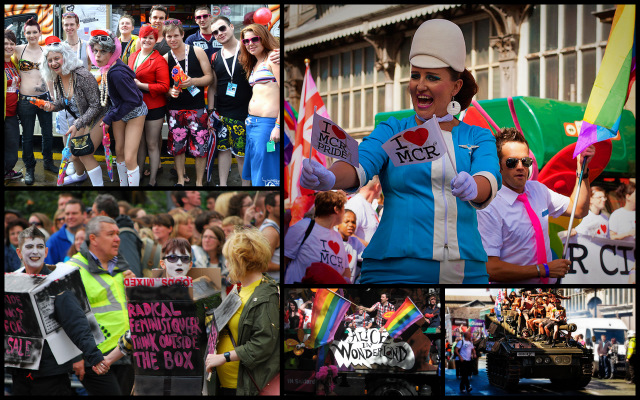 This is when it clicks for me, looking out at a surprisingly diverse assemblage of queers and trans people having fun — the fact that rioters didn’t destroy Manchester and weren’t going to was evidence, to the Mancunians, of Manchester’s pride (not the gay kind, the more general kind) for a city that often feels itself radically misinterpreted by everyone who talks about it. It’s natural to try to keep a lid on any potential criminal speculation. Not here. Not in Manchester. My girlfriend says she feels that way about Canada. 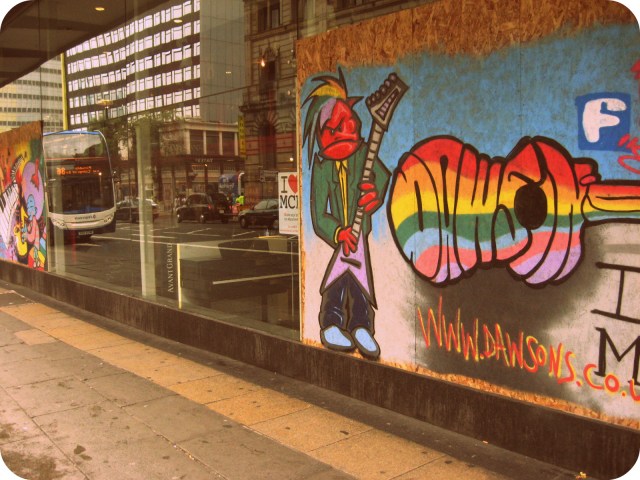 Windows affected by the riots are covered with street art

Dinner this night’s at Australasia, which boasts “Pacific Rim flavours underpinned by European cooking tradition, an exotic blend of Indonesian and Southeast Asian influences.” You go to The Avenue and a glass structure juts out of the ground like someone stabbed the street with a glacier, but then you descend down a glass staircase into a warm, orangey, busy room filled with long tables. The edamame is crispy and salty, the tempura is perfect, the drinks are plentiful. It’s everybody’s favorite meal of the trip. 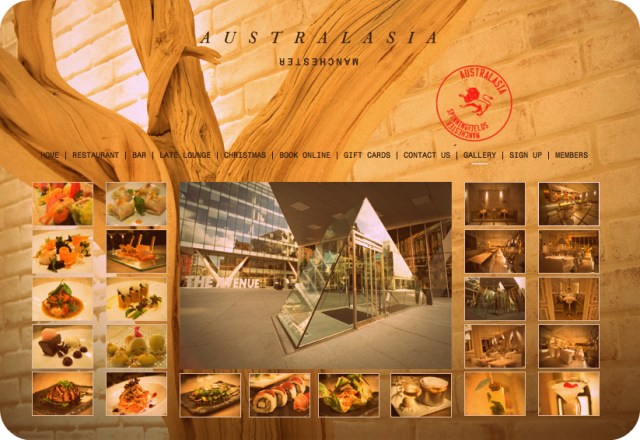 I run back to the Ramada to change, where I plug in my hair iron and blow out the room’s electricity, which puts an end to the Coronation Street a-thon and also email. 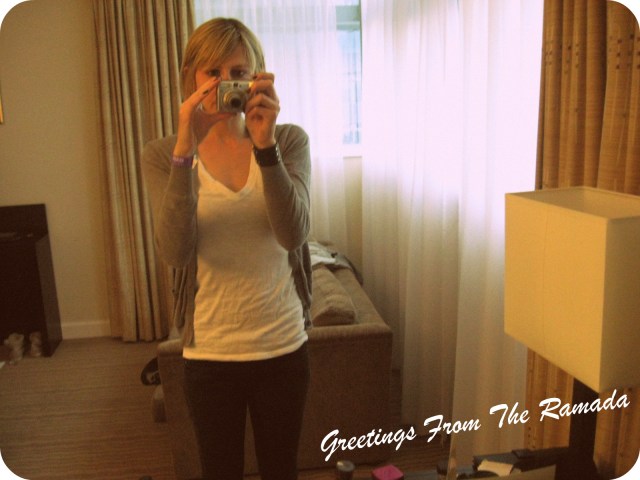 I feel incredibly disconnected from my universe, and while I’m there to write about the trip for Autostraddle, I don’t feel like I’ve been called upon to represent Autostraddle in any way; there isn’t the same pressure we put on ourselves at lesbian events to Take Advantage of the Situation and sell our website to the world and be good sponsors, even when the world is drunk, oil wrestling, and can’t read. But for this trip it’s the other way around, and everything feels good.

The girls in Manchester are cute. Also, a lot of the girls in Manchester look like they could beat me up, even the littlest ones, with spiky mohawks and piercings, low-slung pants with industrial belts and brightly-colored sneakers, one hand in their girlfriend’s and the other holding a beer. 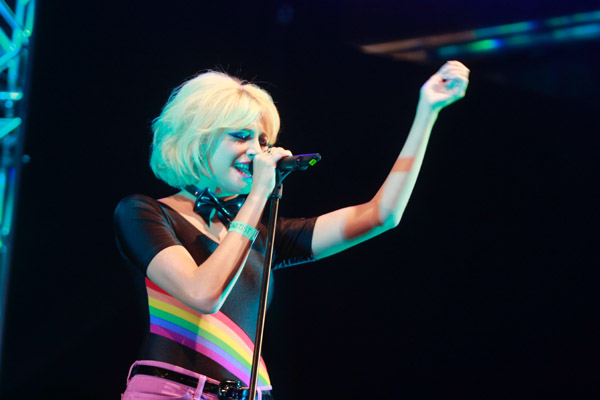 Back in the VIP tent, a group of gay men talk to me about how good-looking Carlos is. After Pixie Lott’s performance — I miss almost all of it — a DJ sets up as the massive crowd filters from the arena to the streets to hit up the bars. Emma introduces me to Heather Peace and she kisses my cheek. She’s really friendly, but so is everyone. 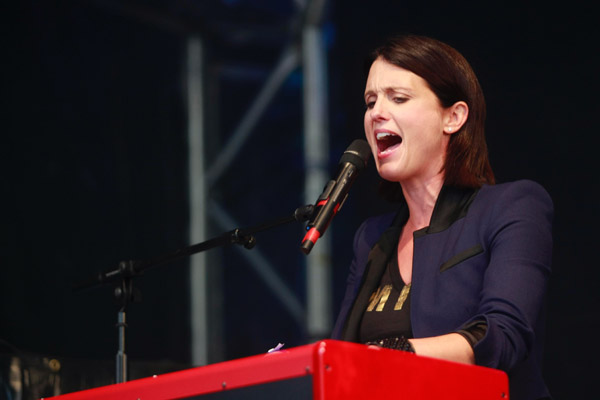 Then these two guys dressed like Brett Easton Ellis characters — brown loafers, oxford shirts, khakis — and clearly tripping on something more fantastic than you and I have ever known — start dancing like idiots. One of them is doing push-ups on the floor, and I look to Carlos who I can count on to reflect my facial expression of disbelief/amazement at any time.

And so obviously we all just started dancing. We jump up and down a lot, like crazy people, nearly alone on the platform. It feels genuinely good, and nobody looks at us funny, and if they look at us at all, they start jumping too. I feel really happy.

Emma wants me to go to Vanilla, which I think is half because she assumes I’m a normal human being who enjoys socializing and would like to get a taste of the lesbian scene and half because she doesn’t want me coming home and telling you that there’s no lesbian scene. Speaking of lesbian scenes, I’d been thinking a lot about Coronation Street. 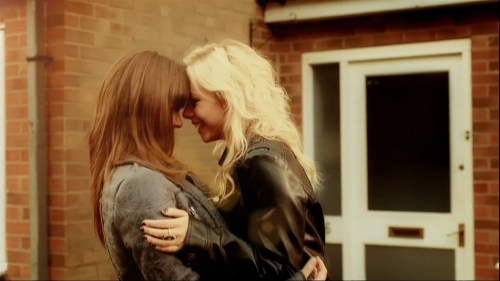 In any event, the whole street outside Vanilla is packed and as soon as we get there, the only appropriate action was to immediately escape, which required, of course, elbowing through the pack of sloshy-happy lesbians excited for the kind of party I used to go to when I was single.

Once we at last extract ourselves from the mob, we split up for the boys to hit up a circuit party event and for Trevor and I to run home in the now-pouring rain.

On Sunday we all sleep ’til noon or later and then drive with Geoff Collins to the Bolton Food and Drink Festival, where it’s also raining.

We’re joined by Rachel Combie, another Manchester Marketing person. We meet up with three other important people at the Harvey Nichols Pop-Up Restaurant in Bolton. It’s good because everything’s good. 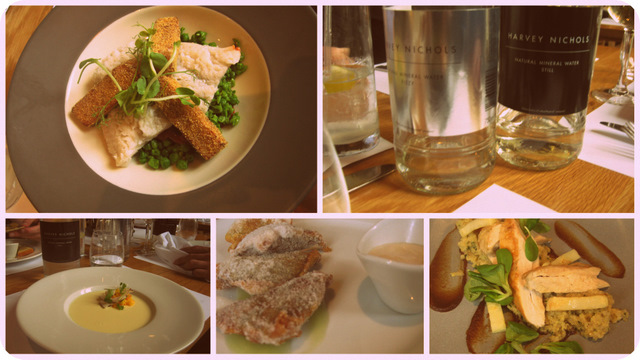 Our next stop, the “Gino D’Acampo Cookery Demonstration” is by far the most random thing on our itinerary, and it takes place in this giant tent-like structure at the Bolton Festival. Gino’s not gay, the festival’s not gay, and nobody besides us in that room is gay. They’re all housewives with big fat crushes on Gino. Yet we are here. I’m excited to find out why.

Gino somehow pulls off meshing a skeezy womanizing act with a genuine passion for cooking (did i just say “passion for cooking”) and humor. The dishes are simple, he’s funny, and I actually learn things too. Also, the entire audience is invited to have a bite of the pasta he prepares. 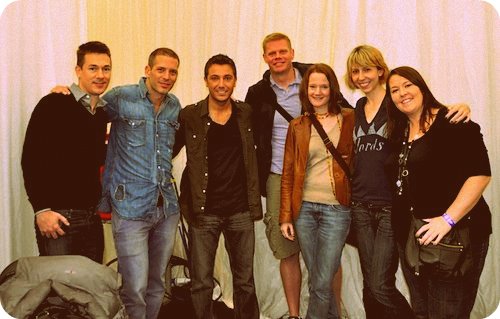 As you can see, this picture with Gino D'Acampo of "I'm a Celebrity, Get Me Out of Here!" was taken between the time my hair iron broke and I bought a new hair iron

Carlos and I walk around the festival taking photos of food we’re still too stuffed to eat. The festival is winding down and it’s raining but it looks neat, like an ambitious Farmers Market. 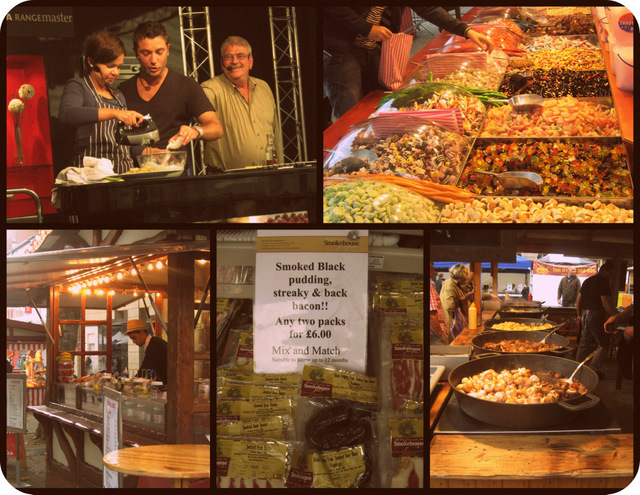 Later that night I meet up with Ricardo at the VIP Tent because Patrick Wolf is playing and nobody cares besides us. It’s lovely, really. He’s got this Morrissey/Rufus Wainwright thing going on and everything he sings feels almost painfully honest and the entire venue — the entire g-ddamn arena — feels different while he’s on that stage. 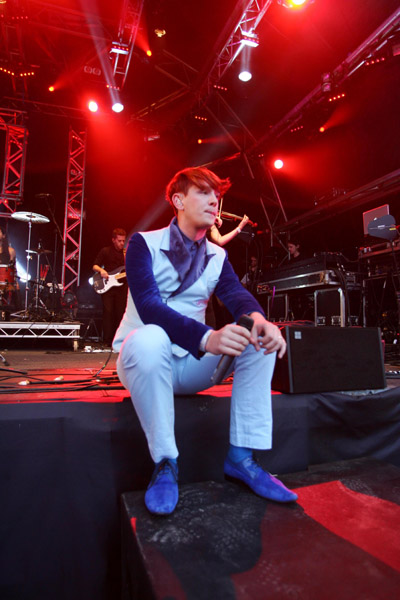 We have dinner at Ning, described as “influenced in concept by the trendy noodle bars of Asian cities, wth the relaxed and sociable ambiance of continental European cafes.” We talk about the business — Carlos is a luxury travel agent and his blog is a companion to his business, Matt says Xtra’s journalism is funded by the gay hook-up site they run on the side. There’s a brief lively conversation regarding whether or not gay male media still benefits from male privilege.

We miss Sugababes, which is fine because I still have no idea who they are, and catch the tail end of Alexandra Burke (again — no idea). After a quick stop at a bar with good music, Carlos and I walk home and I’m not gonna lie, I’m mostly thinking about Coronation Street.

We have the day off to “explore” and I do, a little bit, hitting up the booths and stuff they have out for Pride. Dinner is at Smoak. I have a delicious Cesar Salad and lots of everyone else’s fries. 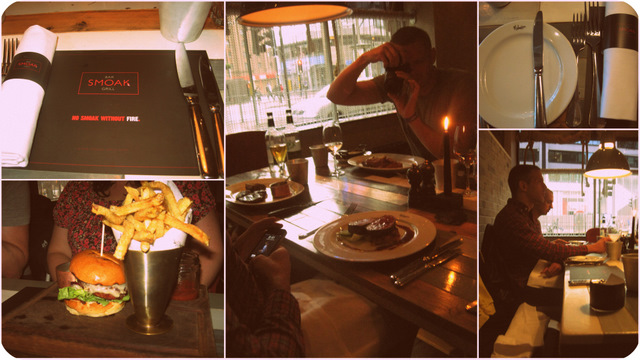 At the VIP Tent Emma gets smudged with rainbow flags on her cheeks and gets super excited about Blue. I like them too because they have coordinated dance routines as well as easy poppy music. Only one of them is gay, allegedly. 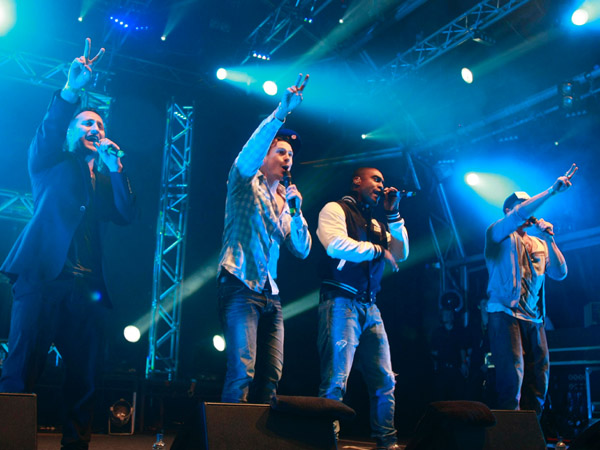 Manchester Pride always ends its festival with the Candlelight Vigil, which is where we’re going next but first I wanna go back to where I started with how Manchester became Gay Manchester.

In 1990, the first LGBT August Bank Holiday fundraiser for HIV/AIDS causes was held outside The Rembrandt Hotel in Manchester. It wasn’t a pride event, but the following year the fundraiser became “The Carnival of Fun Weekend” and eventually, with the support of the Village Business Association, grew into Gay “Mardi Gras.” The event reverted to community control and re-christened itself Gayfest in 2000, during which time they won the right to host 2003’s Europride in Manchester. Fundraising for HIV/AIDS remained the event’s primary focus, which is why the pride festivities are partitioned behind gates and visitors are charged entry fees.

At the 2003 Europride it was announced that the event would now be called “Manchester Pride” and it became a charity in its own right in 2007. Manchester Pride still says its main cause is fundraising for HIV/AIDS charities (specifically The George House Trust) and is run now by Marketing Manchester in conjunction with the Lesbian and Gay Foundation.

Everyone is given a candle and a piece of paper and files into the park and I think, “This would never happen in America because it’s a fire hazard” but I think everyone gamely proves that gay people are capable of gathering in a muddy field to get heavy and sad and not light anything on fire. 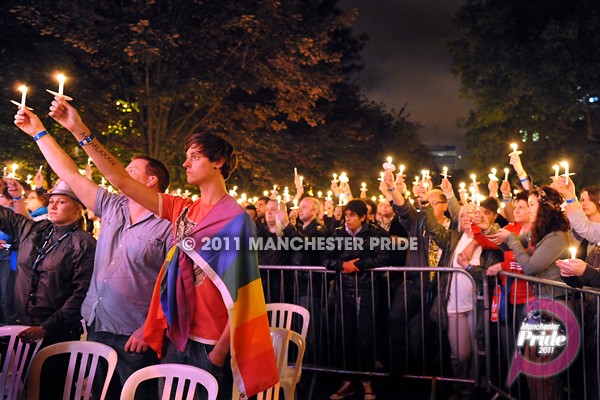 There’s a musical performance of Seasons of Love from RENT, and a lot of speakers, and a moment of silence. Emma says she cries every year and this year is no exception.

Afterwards the guys are gonna go party but I go back to the hotel to watch Sophie & Sian and to pack.

Tuesday morning, Matt and I are taken to the airport by the same guy who picked us up. It looks rainy again, but maybe you just get used to it. “I’ve gotta say, I’m kinda sad to be leaving,” Matt says, and I say, “Yeah, me too,” because it was like I didn’t have to be Me for a week, which was more liberating than I could’ve anticipated. I was just a girl in Manchester with my cheap camera and pockets of coins, eating and drinking and looking at things and it was nice. It was really nice, is what I’m telling you. I hearted the fuck out of Manchester.

[here’s a video from the Manchester Pride People:]