Batwoman is one of the most iconic queer superheroes of all time. She’s a Jewish lesbian who was kicked out of the military for breaking the Don’t Ask, Don’t Tell rule. She’s better than Batman. So it’s hugely important that she has her own solo series. It’s even more important that that series is being written by a writer like Marguerite Bennett, who’s not only one of the most talented writers in all of comics, but is also herself a queer woman. I talked with Bennett about what it’s like writing the series, what she hopes to bring to it, and what she hopes queer readers will get from the series.

Mey Rude: You’re the first woman and the first openly queer woman to write a Batwoman solo title. What does the character mean to you personally, and what do you hope to bring to the book?

Marguerite Bennett: Writing Kate Kane is an honor and a terror. There is no character I have dreamed of writing more. Genuinely, being able to write alongside by brother-in-comics, James Tynion IV, and working with our brilliant artist Steve Epting, under Chris Conroy’s editorial, feels like a superhero team all its own.

To me, Kate is a struggle. She’s fallible. She isn’t Wonder Woman; she isn’t that kind of icon. She fights, and she fails, and she splits her lip and bruises all the way to the bone and she claws up through the mud and keeps going. She isn’t aspirational; she isn’t clean. She isn’t a role model, as we traditionally perceive them. She screws up and she faces her own consequences, but she can be selfish, stubborn, ferocious, and blind. But she means, in all things, to serve something greater than herself — to take the strength, courage, resources, and passion she was given and forge a world better than the one into which she was born. She’s an eternal struggle — a powerful, physical struggle — for peace in the world and in her own heart.

In the end, I hope we make something beautiful, brutal, and defiantly queer. I hope we show you elements of Batwoman and her world you’ve never seen before, had never even imagined, and push her to heights and drive her to depths that make you delight and despair for her. I hope we do justice to her legacy, and create the book I wish had existed when I was young and growing up.

MR: We see a lot of people from Kate’s past returning into her life early in this story; are any of her past romantic relationships going to reignite?

MB: Yes, actually, though not in the way I think readers may expect. Kate has some gaps in her timeline, and she has some actions to answer for.

We’re exploding Kate out of Gotham, and sending her on a global mission to track down villains out of even Batman’s jurisdiction. Our first stop is Coryana, our gorgeous hive of scum and villainy, located in the Mediterranean, about 80 miles off the coast of Malta. Anything can be bought there; anything can be sold. The island is a paradise of white beaches, black markets, stolen goods, wild roses, smugglers’ coves, beautiful assassins, brawling warlords, and one of the great, hidden passions of Kate’s life — as well as the site of her darkest regret.

MR: With today’s political climate, gay people standing up and declaring who we are is more relevant than it’s been in at least a few years. Kate is very proudly and openly gay and her story deals with how that affects her life. How do you see this comic interacting with the current political nightmare?

MB: While BOMBSHELLS is undeniably (and unintentionally, and unavoidably) the most political series I’m involved with (look, I’m not the one who made punching Nazis relevant again, and I’m not going to stop just because it’s a meme now), Kate has to walk a very thin, sometimes very ugly line. She’s the product of the American military, and a lot of the skills she gained come from a massive and hideous history of oppression and violence. Simultaneously, she’s trying to navigate the moral ground of how to use these powers. Batwoman is fallible. Batwoman can choose wrong. And Batwoman has to deal with fallout.

Kate is a queer Jewish woman in a world that has turned even more violent and hostile to who she is, before she even put on the cowl and mask. Her identity as a super heroine is a direct product of the contempt and discrimination she faced, for better or for worse. Frankly, she could have had a super villain origin from the same story, but she chose, actively and with intent, to make the world a better and not a worse place. She chooses. Her identity is only not defined by who she loves, but also by who she is. She lives and acts in defiance of what other people would have her be.

MR: What do you hope queer fans will get out of reading this series?

MB: I spent a long time thinking about this answer, and in the end, all I feel I can say is that I can only hope they enjoy it — that they find it beautiful, or furious, or intriguing, or mysterious, or enriching, or exciting, or simply entertaining.

Every reader seeks their own stories, their own tastes. Queer folk, though a community and identity unite us, are no different. Every reader and fan will have their own interests and desires for the book, and all I can hope is that we deliver a beautiful, brutal, creative, and consequential story. Evil and violence will rear its head. Imperial, colonial powers will seek to absorb, corrupt, and destroy a free nation. Kate will face the damage she did years before. Julia will steal everyone’s heart. Ugly bargains will be struck. Moral grays will spread. Batwoman will face an evil she helped create, and be changed for what she sees.

And I can only hope, in the end, that the journey means something to you. And thank you, from the bottom of my heart, for reading.

The next issue of Batwoman comes out April 19th. Here’s a special exclusive preview of the issue. 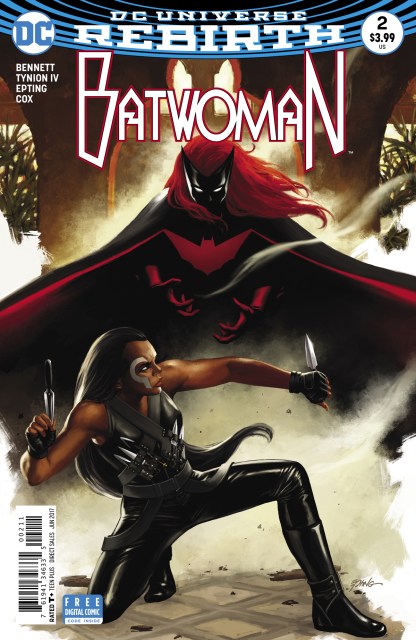 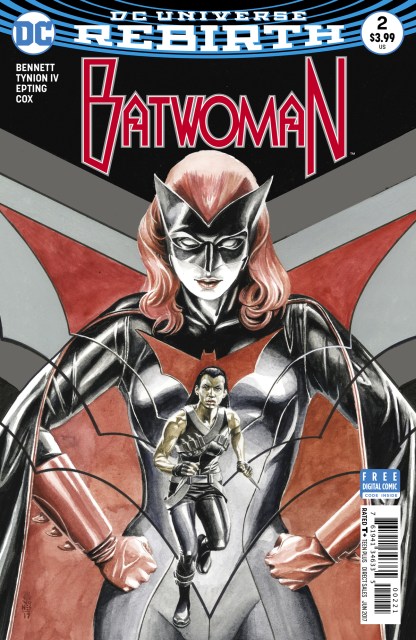 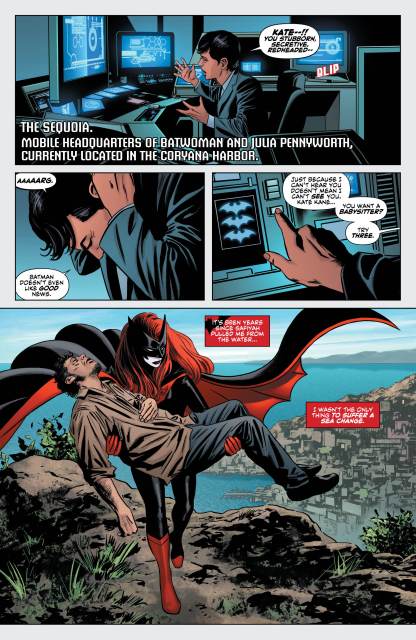 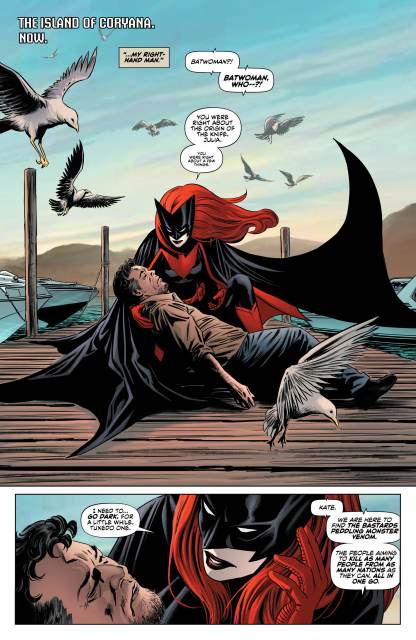 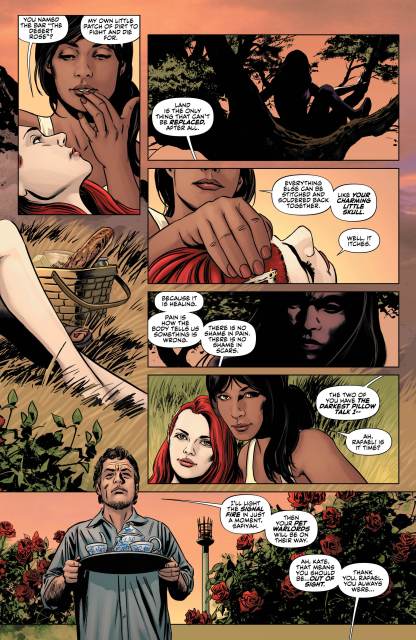 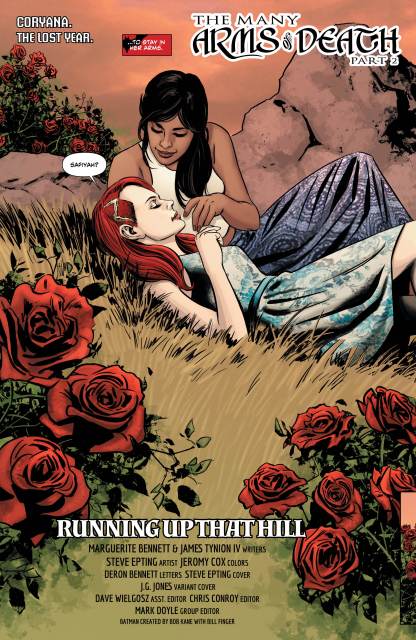 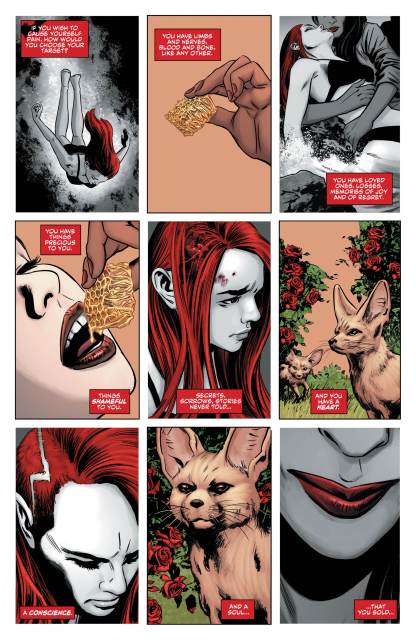 Once and Future Queen #2

Batgirl and the Birds of Prey #9