Have you heard? “Lumberjumbies” is new hip slang for Lumberjanes fans that Grace Ellis and Brooke A. Allen picked at the Staple! Independent Media Expo. With Lumberjanes #12 we saw what can be counted as the second official Lumberjanes storyline come to an end. And Holy Lucy Diggs Slowe, what an ending it was! We saw both a conclusion to Mal and Molly’s date-turned-into-getting-lost-in-an-alternate-world and April and Jo’s quest to get a regular Lumberjanes merit badge (Ripley already successfully got her Absence Makes the Heart Grow Fondant badge last issue). There were diagrammed plans, cherished memories, prehistoric beasts, lessons learned and homages to classic Laura Dern films. What a great ride this was. 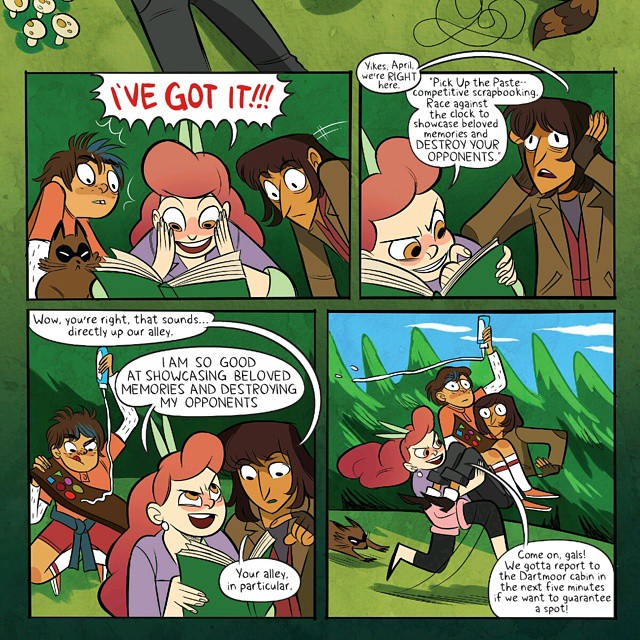 I’m going to start with April, Jo and Ripley. After trying and failing at a half-dozen different badges last time, these three think they’ve finally found their calling when they find a badge for making scrapbooks. April immediately declares that she knows that they’ll kick butt at this. The “Pick Up the Paste” badge is for competitive scrap booking and rewards those who can “race against the clock to showcase beloved memories and destroy your opponents.” These are two things April feels especially talented at doing. 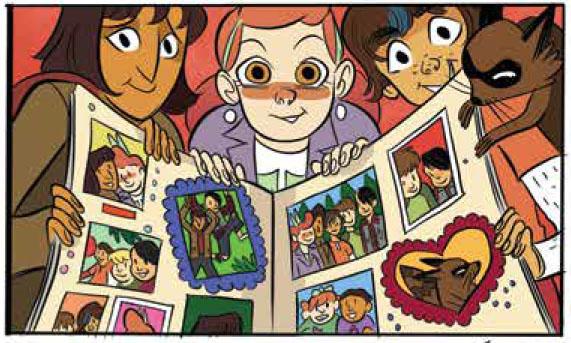 Unfortunately, things don’t go quite as well as she had hoped. She and Jo get caught up looking at an adorable picture of the two of them as little tiny children and suddenly realize just how far behind another team they’ve fallen. April immediately starts to freak out, but Jo reaches out to her and uses the power of friendship. She suggests that maybe they just, you know, try having fun? They decided that instead of making a rushed but full scrapbook, they’ll try making the cutest and most heart-warming scrapbook possible. And they pretty perfectly succeed. The panel where April, Jo, Ripley and Bubbles are holding up the scrapbook pages they’ve made is totes adorbs. No matter how adorable they are, though, another team finished their whole book, and so they got the badges. April is obviously devastated. That is, until Ripley shows April and Jo the badges that she made for the two of them herself. 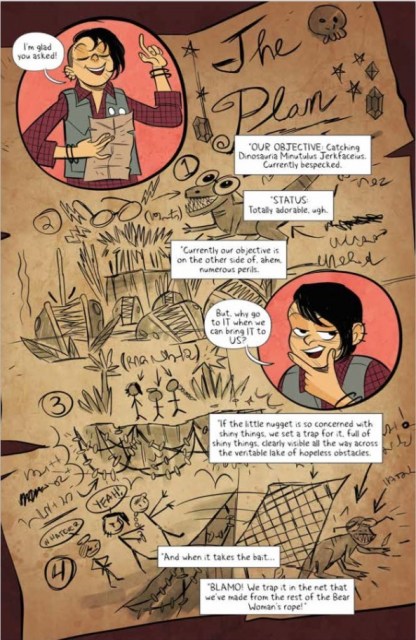 Back in Weird Dinosaur and Ancient Ruins Land, Mal has a well-diagrammed plan on how they can get Bear Woman’s glasses back. After Mal’s all tuckered out from planning and falls asleep, Molly gets a little deep with Bear Woman. She asks about BW’s past and why she lives in the woods, but after only getting a few questions out, BW turns the tables on her and asks, “Now, are you asking me that because you actually want to know, or because you want to know how you can stay here too?” Oof, that cuts deep. Then BW stretches, turns into a bear and makes a weird reference to Molly possibly being “chosen” by the woods to maybe stay there forever? What???

Anyway, the next day Mal and Molly are laying on a cliff waiting for the dinosaur that stole BW’s glasses to fall into their trap. While they wait, they also talk. Jeez, this issue is just full of Deep Conversations With Molly. She tells Mal that she wishes she were more like her and that back home, she doesn’t really know who she is, or even who she wants to be. Then she leans on Mal’s shoulder and tells her how happy she is that they found each other at camp and chose each other. Ugh, Molly, 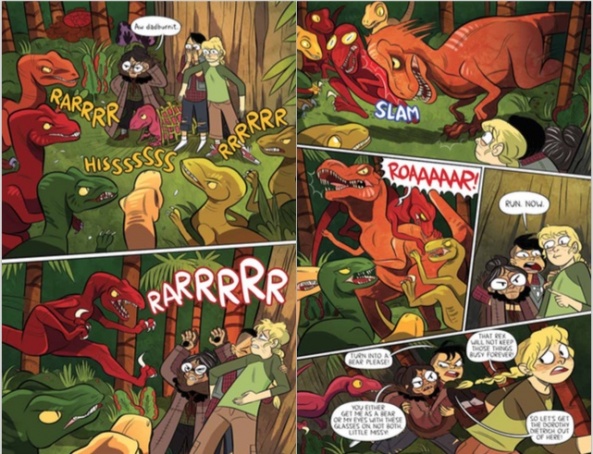 Despite the Feelings Overload, Mal’s plan actually works pretty dang well. As The Lumberjanes (and we) learned in Issue #5, dinosaurs are easily trapped in handmade nets. They get BW’s glasses back and are ready to go home when suddenly, they’re surrounded by raptors. But then you can practically hear John William’s sweeping music come in as a T-Rex bursts out of nowhere giving Mal, Molly and BW the chance to slip away and make it back to camp.

This finale to the three-issue story arc was filled with fun, excitement and tons of feelings. It did a great job of ramping both storylines all the way up and then bring them to satisfying conclusions. After this issue, Allen, the original artist will be returning to her art duties, taking over from Carolyn Nowak, who did a really, really great job for these past three issues. One of my favorite things about these last few issues has been the way Lumberjanes has continued to totally flesh out its characters while still telling a sometimes wacky story, and I can’t wait to see how they continue to do that next.

In a week when Batgirl #40 featured a great closing to a terrific arc and even set up a black bisexual woman with muscular dystrophy to be the next Oracle, comic news was dominated by another story involving Batgirl. This upcoming June, after DC has finished with its Convergence crossover event, titles across the company will feature variant covers starring DC’s most popular and iconic villain The Joker. If you know anything about the history of The Joker and Batgirl, this might already be setting off alarms for you. While other comics, such as the recently-revealed-as-bisexual Catwoman, decided to take a more comedic approach, artist Raphael Albuquerque decided to bring back one of Barbara Gordon’s and DC Comic’s most disturbing and least women-friendly moments of all time. His cover for Batgirl #41 recalls The Killing Joke, a Joker story where the villain not only shot Barbara Gordon point blank, paralyzing her from the waist down, but then proceeded to take pictures of her naked and covered in blood. Albuquerque’s cover not only brought back this moment, but showed Barbara Gordon in her new costume being held by The Joker, eyes filled with tears and as big as plates.

Needless to say, this cover is the exact opposite of everything the new Batgirl run, and DC’s recent trend of titles like Gotham Academy, Black Canary and Starfire, has been trying to accomplish. Batgirl seemed to be taking the lead in DC’s efforts to reach out to women and younger readers, but this was a huge step back. A move like this shows that there are still some higher-ups at DC who simply don’t get it. To think that a cover that is clearly meant to recall and even imply sexual violence on a comic that is targeted towards young women would be okay shows that we still have a long way to go. Imagine a high school-aged girl walking into a comic shop after hearing that the new Batgirl comics are aimed at someone like her. Then she goes to look for the comic and sees this image staring right back at her.

Even after co-writer Cameron Stewart took to twitter to say that the variant cover “was not seen or approved by anyone on Team Batgirl and was completely at odds with what we are doing with the comic” and Albuquerque himself requested that the cover not be released, the damage was done in a lot of people’s eyes. And the fact that people who criticized the cover received actual threats of violence shows that comic fandom still isn’t a safe place for women and new readers. Both the Batgirl creative team and Albuquerque made the right moves in this situation, but just the fact that it happened in the first place is the problem. It seems like with every step forward the world of mainstream comics takes, it takes one equally large step back. 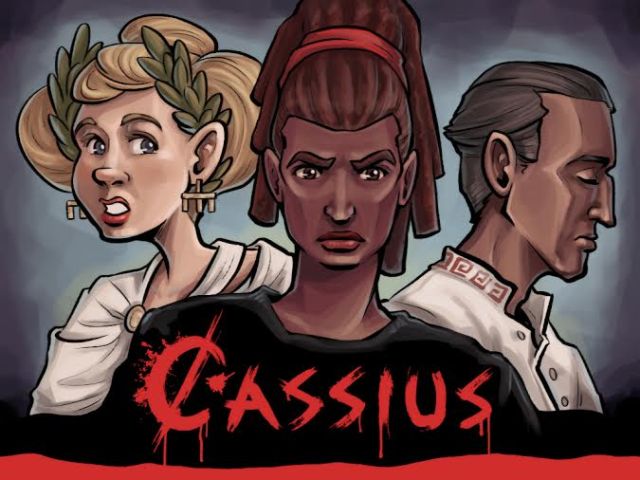 If you’d like to support a cool-looking comic created by and starring queer women, look no further than the Kickstarter campaign for the Julius Caesar inspired comic book Cassius. Written by Emily Willis and with art by her fiancée Ann Uland, Cassius tells the story of Junia, a young woman in the Roman-inspired world of Latium who bears the legendary Mark of Cassius and is thrust “into a world of politics, betrayal, greed, bloodshed, and fate” which Junia must overcome in order to survive. This comic seems like it will be full of unique art, an interesting (and queer) twist on a world a lot of us are familiar with and a lot of excitement, so if it seems like something you’d be interested in, head on over and donate what you can.

Jem and the Holograms #1 (IDW)