Although she’s been around in the comics for nearly fifty years, many of us met and fell in love with Agent Peggy Carter in Captain America: The First Avenger. She was funny, full of heart, super tough and took absolutely no guff from anyone. Without her Captain America would be only half the hero he was. Now, Marvel is capitalizing on this awesome female hero’s newfound popularity by giving her both her own TV show starring Hayley Atwell as the Strategic Scientific Reserve agent trying to clear Howard Stark’s (Iron Man’s dad) name and earn some respect as a woman agent in post-war America and a comic book written by Kathryn Immomen about Peggy’s adventures with Stark in Soviet Russia a few years later.

The first issue of this new comic, Operation S.I.N., came out a couple weeks ago and it teams up Carter and Howard Stark with Woodrow McCord (who was Earth’s “Man on the Wall” back then, meaning he was in charge of defending our planet from alien invaders) and a young Russian agent named Tanya Belinskaya as they investigate what appears to be some sort of Alien invasion in Russia. This is definitely more pulpy than the TV show, or even Peggy’s appearances in the movies, and because of that it’s a fun way to get even more into the character we all love without having to dig back deep into the Marvel archives. Even if it’s not quite the Peggy Carter you’re used to, it still has a lot of the same pep and Peggy still packs the same punch that she packs in her recent on-screen appearances. This is all sort of tied in to the recent big Marvel Event “Original Sin,” but you really don’t need to know anything about that to thoroughly enjoy this comic.

As for the Agent Carter TV show, it’s really super fun. I’m always up for period piece, and if you want to know more about the history of the Marvel Cinematic Universe, there’s not really a better way to do it. You get to see Iron Man’s dad being under suspicion of being a traitor to the US Government, the original Jarvis (who Tony Stark’s A.I. assistant is named after and based on) being a British gentleman who makes sure to be prim and proper as he assists Peggy in taking out the bad guys, the prototype of what S.H.I.E.L.D. would later become and the immediate aftermath in America after Captain America is presumed dead. Plus you get to see an awesome lady spy who can totally win a fight against anyone who goes up against her, whether she uses her own fists, her briefcase, a stapler or a gadget thought up by Howard Stark. 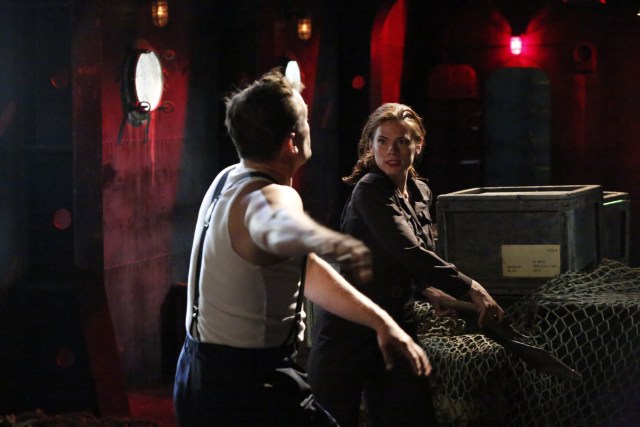 Another great thing is that the show absolutely does not shy away from the sexism that Carter and other women would have faced. In fact, it straight up makes that one of the focuses of the show. In the first issue, Peggy and her roommate, Colleen are talking about their days and Colleen tells Peggy about how they’re having to lay off experienced women from the factory and hire men who have no idea how to do the job. World War II is over and the men want their jobs and their role as the breadwinners back. Things are just as bad for Peggy at work. Despite literally helping to take down a supervillain and his evil army of supernazis, Peggy is treated like she’s basically a glorified secretary.

Peggy is pretty freaking amazing at flipping the sexist attitudes of the men around her to her advantage. She’s able to use “women’s troubles” as an excuse to get away from the office and do some real spy work. She’s able to trick the bad guys into thinking she’s no threat at all right before she knocks them out and steals from them. And she’s able to do her own thing completely under the radar, all because everyone thinks she can’t. 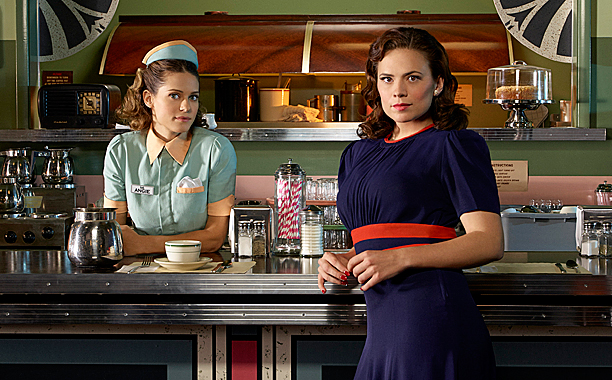 If you’re not watching Agent Carter, I don’t know what to say to you. It’s pretty dang great, you guys. Peggy kicks ass, she’s a great dresser, she’s super cool and she has an awesome waitress friend/neighbor named Angie who she semi-flirts with all the time. Let me tell you, I am 100 percent here for bisexual Peggy Carter.

You can check out your local comic shop for the first issue of Operation S.I.N. or look online. If you want to start catching up to Agent Carter, the first three episodes are available on Hulu and there’s a new episode tonight on ABC. Although the two don’t take place in the same universes and so they won’t exactly cross over, I’d say it’s still definitely worth checking both out. I mean, really, can you ever have too much of Peggy Carter?