I remember being a kid and watching Batman: The Animated Series and loving every minute. What I loved the most, though, was all the amazing women characters. There was Batgirl and Catwoman and Talia al Ghul, but there was always something special about two characters: Poison Ivy and Harley Quinn. They were super cool, super strong and could hold their own against anyone. They also had terrific chemistry. In one episode, they’re even shown standing in their pajamas and sharing a “hideout” that only has one bedroom and one bed. That’s gay. But not canonically. Not on the pages of an actual real universe DC Comic. Not until last week. That was when Harley Quinn #25 came out and we finally got to see this fan-favorite couple kiss in the pages of a main-universe comic book. This is honestly a huge moment for queer representation in superhero comics. 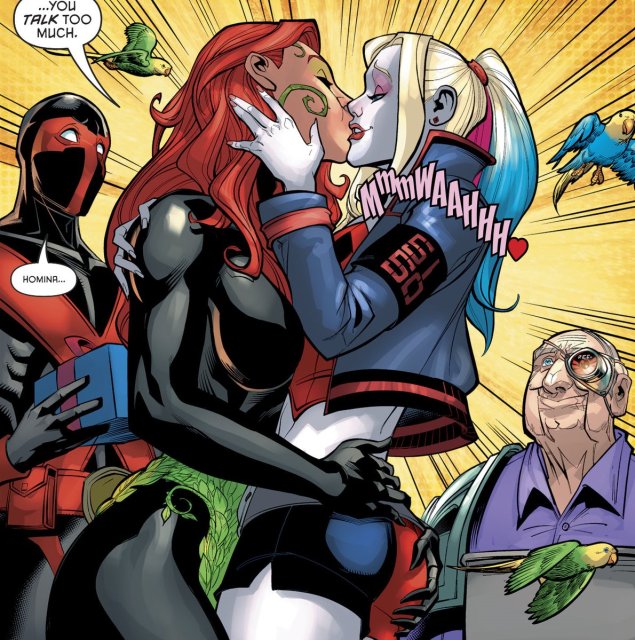 In the issue Harley is surprised by all of her friends for a birthday party a month and a half before her birthday so that she’d never suspect it. Right after everyone shouts “surprise!” and reveals to Harley that the surprise is on her, Ivy pushes a man out of the way and kisses Harley square on the mouth. There’s no mistaking this for a friend kiss or anything subtle. This is a handful-of-ass, lots of tongue, full-of romantic love kiss. And it’s right there big on the page. Look at that, that’s gay (or bi or queer). I’d hazard to guess that Harley is probably bi, pan or queer, as she’s most famously been in a relationship with The Joker and she’s shown attraction to many different people.

This kiss has been a long time coming. Back in 2015, Harley Quinn writers Jimmy Palmiotti and Amanda Conner were answering questions about the Harley and one asked about her relationship with Poison Ivy, which has been the subject of rumors for a long time. They tweeted out “Yes, they are Girlfriends without the jealousy of monogamy.” This had been what many readers thought for a long time, but this was the first time it was officially confirmed by DC Comics. Since then we’ve also seen Ivy and Harley kiss in DC Comics Bombshells, the absolutely wonderfully perfect alternative history comic by Marguerite Bennett. This series takes place during World War II, but in a universe where all the superheroes are women. Instead of Batman, we have Batwoman; there’s no Superman, but there is a Supergirl. Also, so many freaking heroes are queer. Mera talks about being Wonder Woman’s first kiss, Barda and Dr. Light are in a relationship, and most notably, Ivy and Harley are a couple who’ve kissed on panel multiple times. This is the DC Universe we all wish we had. 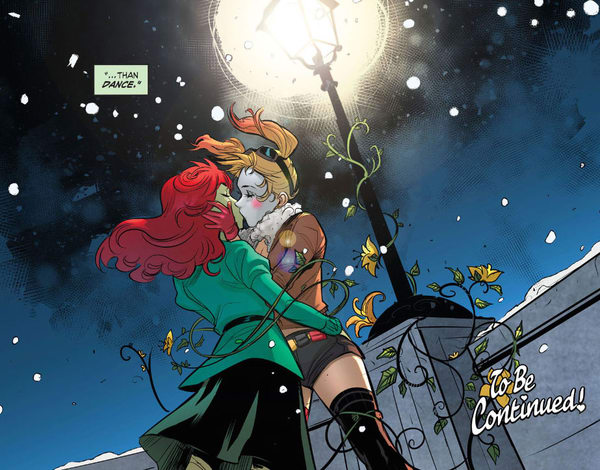 They’ve also kissed on the pages of Injustice: Gods Among Us, another alternate universe comic. But this is important. There are “Elseworlds” stories where Batman is a vampire, or Superman is Black, but this is the mainstream, for real, this is canon DC universe saying “Hey look, we weren’t joking about Harley and Ivy being a couple, they’re together, they’re queer, they love each other.” This means that the three biggest female rogues in Batman’s rogues gallery have all kissed women on panel in canon. Catwoman is bisexual, Harley and Ivy are both queer, and then when you add in the lesbian Batwoman, that’s an extremely queer Batman universe.

Currently Harley Quinn is one of the most profitable names at DC, and she’s led multiple books over the last few years and shows no sign of slowing down. If she continues her relationship with Ivy on the pages of her comic, that means that one of the most popular DC characters will regularly be kissing another woman. 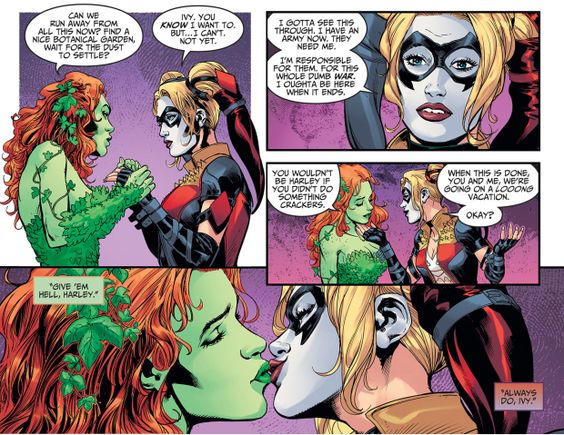 Harley and Ivy kissing in Injustice: Gods Among Us

Hopefully this is a good sign for the upcoming Harley Quinn movie that Margot Robbie is producing and starring in. Rumors have said that it might be a Gotham City Sirens movie, starring Harley, Poison Ivy and Catwoman. Fans have been hoping that the movie will show the relationship between Harley and Ivy, and with DC doing more and more every year to solidify the relationship and bring it more to the forefront, maybe it’ll actually happen on screen. The DC Extended Universe has already shown it’s willing to emphasize diversity with it’s casting of queer actors Cara Delivigne and Ezra Miller, it’s commitment to movies staring people of color like Cyborg and Aquaman and women like Wonder Woman and Harley Quinn, so hopefully some LGBTQ characters will be openly existing in the movies soon.

Jem & The Holograms The Misfits TP

Join A+!
Related:Drawn to Comics