I’ve been wanting to write about Victoria Grace Elliott’s webcomic Balderdash! or, A Tale of Two Witches, here in Drawn to Comics for a long time. It’s gorgeous, has great characters, takes an old concept (witches) and puts a great new spin on it and has really terrific writing. Elliott recently went on a hiatus from working on the comic, and then just last week she posted an update reminding all of us just how great the comic is. Now’s a perfect time to jump on board. 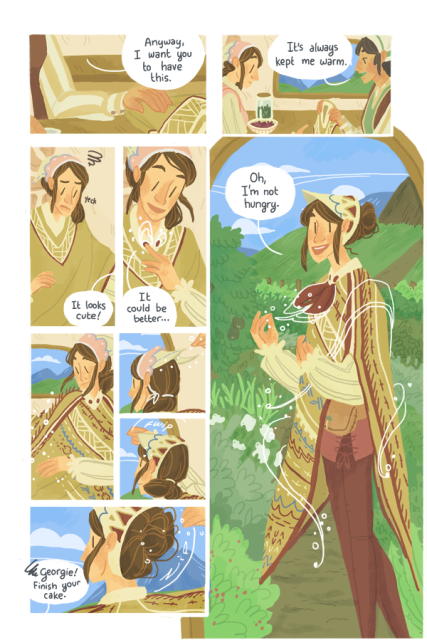 As the second part of the title says, Balderdash! is a comic about two witches. So far, their paths haven’t crossed, and instead we’ve been following their individual journeys to see how they get to where they are today. Georgie is a witch who grew up on an Elk Farm out in the country and wants nothing more than to be a great baker. Afia is a city witch who’s making her way into the River Valley to learn more about magic. This whole comic is told with such a profound hope and kindness. It lifts your spirit and makes your heart swell.

Even though Georgie is a witch, her goal is to learn how to bake without using magic, just like her hero, the famous baker Fausto who lives in the town of Löffel. In order to do this, she leaves her family and home and goes to town to work as Fausto’s apprentice. Georgie has an excitement, can-do attitude and bubbly personality that’s infectious. Basically, she’s an A-list cutie. She’s got a lot going against her: her best friend doesn’t like cakes made without magic, the townfolk don’t like most things to do with magic, her new mentor is kind of a jerk and she’s farther away from home than she’s ever been, but she still keeps on reaching for her goals. 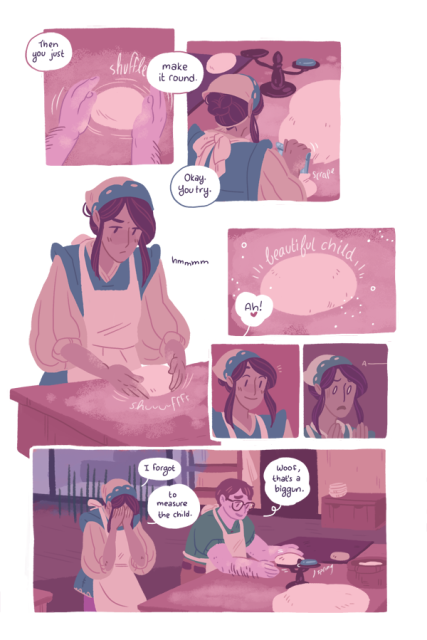 Afia, on the other hand, is coming to this town from a big city, Bakunini, the capitol. She ran into some trouble with her studies and leaves town for the same River Valley where Georgie is to work on a new thesis (or at least that’s what she says she’s going to do). Afia’s just darling; she’s super stylish and has a cute corvid familiar. She’s out seeking to learn more about magic, a thing that connects her to her grandmother, and she’s leaving behind everything she knows in order to do it. Both witches are starting off on grand adventures and trying to find out what kind of person they’re meant to be. 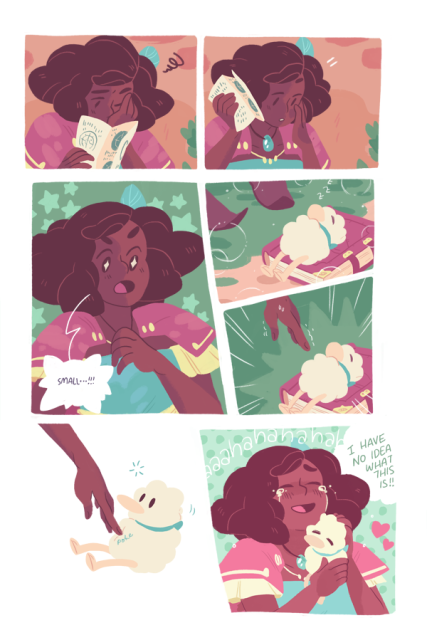 These two characters are great on their own and I can’t wait to see how their worlds combine. They’re both witches, but they come from such different worlds and use their magic so differently in ways that really make the world seem big and full of different types of cultures and people. The entire town of Löffel is just cute and gorgeous and filled with so many characters I can’t wait to meet. Balderdash really is a comic with a hugely bright future.

I love the art in this comic. It’s so beautiful and calming and just pleasantly warm. Elliott’s use of color and shape create an atmosphere that takes you right into the fantasy world where these characters live. Everything has a very cloud-like look to it, making it seem like the kind of thing you would be imagining while your grandmother tells you a folktale. The fashion that Elliott draws on her characters is just stunning. She’s been able to create these wonderful and distinctive styles that show off the cultures of the different groups and look just wonderful. Elliott really has created something wonderful here. 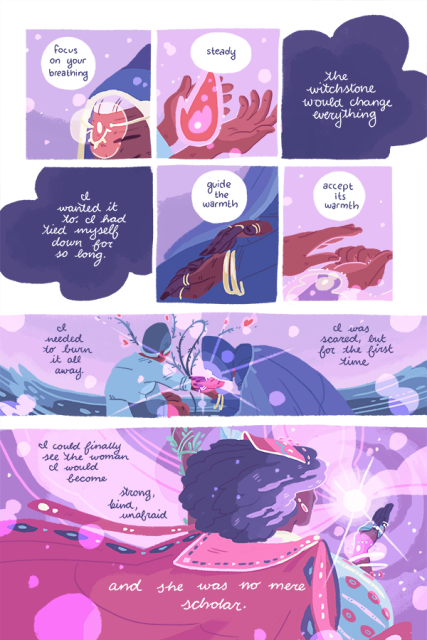 Bladerdash takes some really, really clever turns, both within the story and in the structure of the comic itself. Every now and then the regular story takes a break and we get a recipe or instructions for a magic spell. It adds a whole new dimension to this already great comic. This is just really a super great comic that I hope all of you start reading. You can follow Elliott on twitter and on tumblr, and if you want to help make sure that she’s able to keep on making Balderdash, you can support her on Patreon. You can also buy a really gorgeous poster from the comic online.

X-Files: The Truth is Out There TPB (IDW)