This week, The Internet Archive (same folks responsible for the Way Back Machine), released over 2,000 classic DOS games that we can all now play for free on the internet. Cue everyone’s productivity coming to a screeching halt. And cue us all getting into a Way Back Machine of our own as we all transport ourselves to, what, fourth grade? For me it’s forth grade, and let me tell you — I am having flashbacks so hard right now that you can practically hear the harp and see the image go all wibbly. Here are the most Proustian DOS games and the memories they hurtle into my brain matter. Why not bake some of the classic memory lane treats and treat yourself to a lazy Saturday morning revisiting the annals of computer game history?

To play any of these, I suggest using Firefox or Chrome — the in-browser DOS emulator is in beta and works best in those two browsers. I also don’t personally have sound on any of these and don’t think anyone does, but feel free to say I’m wrong if you do! 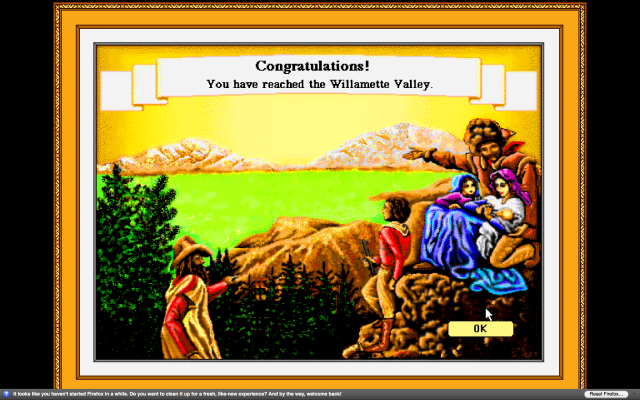 Today I got all of us to Willamette valley in good health, which was a combination of luck, skill and the fourth grader in me who knows that you always choose to be a doctor at the very beginning because duh, they get $1,200 dollars and their team members are less likely to bite the dust from a snake bite. This game takes me back very specifically to fourth grade — we had a really old computer and during the winter when indoor recess was frequent, we could each sign up for slots on the computer. This was one of the games we could play — that and this other weird ecology game where you were a fish in a pond that, believe me, I tried to find in this database but failed because I can’t remember the title. The carpet was gray. The desk was a little off kilter. And my fourth grade teacher also taught me to juggle with one hand that year. He was cool. 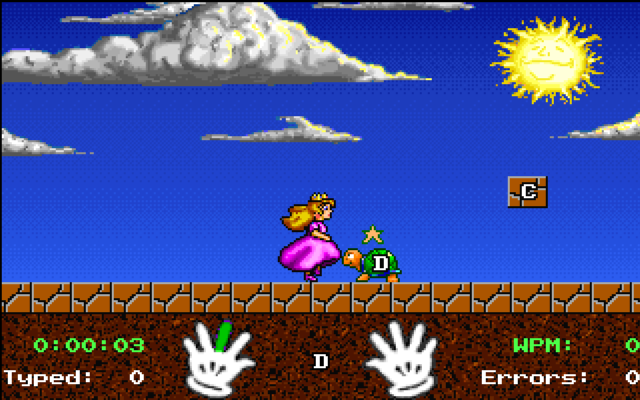 This was a game we had at home — we had Macintosh computers, and this is one of the few that my friends played that I also played. On our computer, this was surrounded by Mathblaster and Kid Pix. And I don’t think I knew how to select Princess Peach because I remember always being Mario, but evidence suggests I would have selected the pink one based on color alone. I suppose I was not always good at computers. Having played this today, I can tell you THIS GAME IS REALLY HARD FOR AN ADULT! Like, you’re used to typing the way you type — and you’re used to typing your own ideas, not “fgfgfgfjhjfjfjfhfhfhfhhjhj” or “sad sad lad lad had had dad dad.” I am a person who uses a computer for a living, who teaches other people how to use them — and whoo boy, this was rough. I also learned that I apparently type the letter “b” and the number “6” with unauthorized, unapproved fingers.

Give Mario Teaches Typing a go. 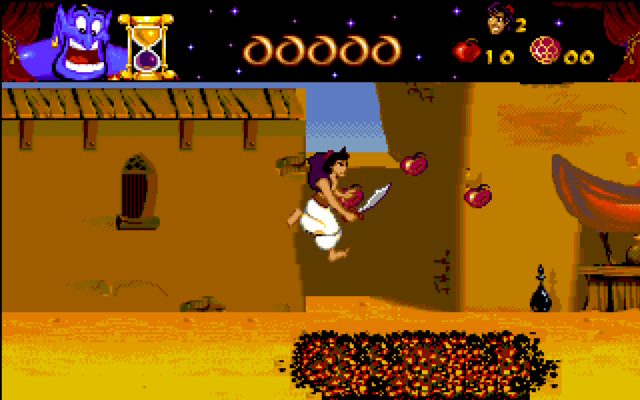 I actually didn’t play this on the computer as a child — I would ride my bike down and over a street and play this with my friend on her SEGA Genesis. We didn’t have a console until Nintendo 64 came out, and it was a rare treat to play on her console. She was really good at it — she could do the flying carpet level and everything. I, however, sucked Abu butt on that one. And you know what? I am even worse at this game trying to use the keyboard because everything in my body is screaming for the controller that I once held in Dani’s basement. And don’t worry — I didn’t take advantage of Dani’s console kindness. We sometimes took her to elementary school with us, which meant Dani, my brother and I all played Super Mario 64 before school in the morning.

This game requires you type a word from your manual — I think you can type any word and it will let you through, but I keep typing “the” and that seems to be working. PS, this game makes me sad all over again about Robin Williams.

See how badly you still suck at Aladdin. 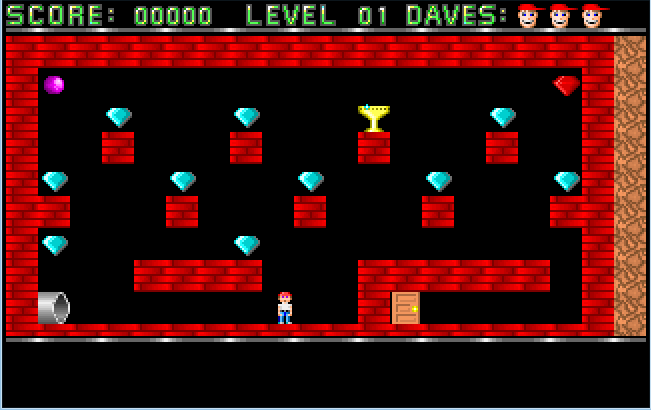 Ah, this one. I grew up playing PC games with my friend Laura, and Laura’s older brother’s name was Dave and he played this game and we just thought THAT WAS THE COOLEST THING IN THE WHOLE DAMN WORLD. So we played it too. Poorly, obviously, because this game is v. v. difficult and doesn’t have a save function. We played this in her basement, which had a pole in the middle of it and also had a tank of scary fish with teeth. We would walk down to CJ’s Sweets and Treats, spend our collective allowance on candy, and then commence gaming and rotting our teeth out with wax bottles and other candies which are, in hindsight, totally disgusting. Now I can’t find the first in the Dangerous Dave series, which is what we played — but the others are there. I also can’t seem to make this work on any browsers on my computer, but I’m hoping you can.

See if Dangerous Dave works for you! 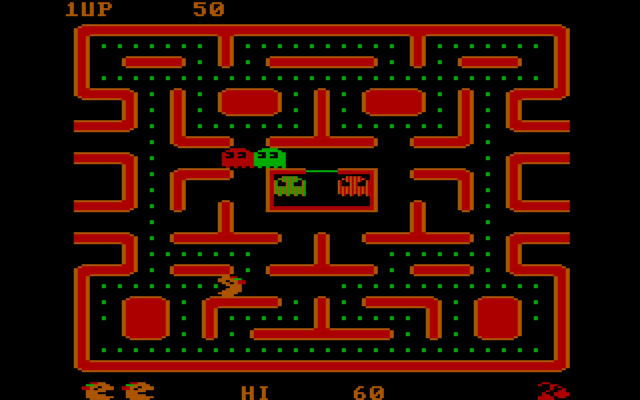 This is another one I didn’t play on a computer — I played it on an arcade console in the lobby of a restaurant that was either called Rattlesnake or Ground Round (which I used to call Ground Hound, for some inexplicable reason as I had no problem with my “r” sound). This was in the same era where I would basically only eat chicken nuggets. My father would pop tokens into it even though I was, as with most games, really effing bad at it — but hey, for this one I was very very little. I could barely see the buttons and I’m pretty sure I started out pushing the buttons mostly based on color. Probably I just pressed a pink one over and over again.

You must press F1 to start this game — if that’s not working for you, click in the window and try F1 or fn+F1.

See how you fair at Ms. Pac Man.

So what puts you in your time machine? Is it Prince of Persia? Donkey Kong? Please reminisce with me in comments below, or I will definitely feel like I’ve wasted a whole day playing DOS games and we wouldn’t want that, now would we?

This has been the one-hundred-twelfth installment of  Queer Your Tech with Fun, Autostraddle’s nerdy tech column. Not everything we cover is queer per se, but we talk about customizing this awesome technology you’ve got. Having it our way, expressing our appy selves just like we do with our identities. Here we can talk about anything from app recommendations to choosing a wireless printer to web sites you have to favorite to any other fun shit we can do with technology. Header by Rory Midhani.