The Whoverse is no stranger to queerness. Omnisexual Captain Jack Harkness of Torchwood is probably the gayest TV character in history. And then there was poor sweet bisexual Ianto (RIP). Tosh (RIP) fell in love with a woman once. Gewn Cooper made out with a woman once. We’ve had Captain John “Spike” Hart. We’ve had Madame Vastra, the lizard woman from the dawn of time, and her wife, Jenny (RIP, but then: RESURRECTED!). And we heard rumor that our beloved River Song (long may she reign) was bisexual (she once had a wife). Clara hinted at being bi. But now, my friends! Now the wibbly wobbly timey wimey shenanigans in the TARDIS are about to get even gayer as Bill Potts becomes the Doctor’s very first openly gay companion.

According to the BBC, “Bill Potts’s sexuality will be revealed pretty much straightaway in her second line of dialogue when the show returns to BBC One on 15 April.” 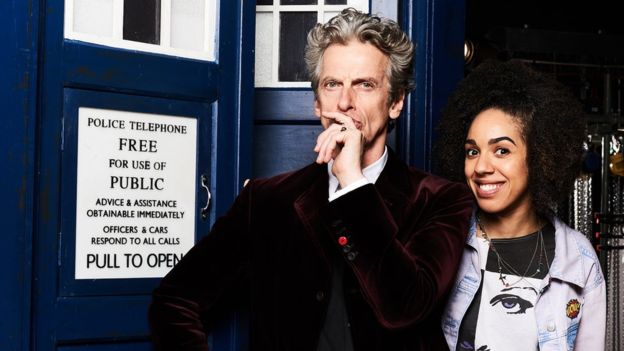 To Victorian England on the double, good sir! I have an appointment with a Silurian!

But wait, there’s more! Pearl Mackie, who plays Bill Potts, is also biracial! A queer woman of color weaving her way through the space-time continuum! Here’s what Mackie had to say about the role:

“It shouldn’t be a big deal in the 21st Century. It’s about time isn’t it? Representation is important, especially on a mainstream show. It’s important to say people are gay, people are black – there are also aliens in the world as well so watch out for them. I remember watching TV as a young mixed race girl not seeing many people who looked like me, so I think being able to visually recognise yourself on screen is important.”

As we all know, there’s a rising tide of horrifying heteronormative white nationalism sweeping through Europe and the United States, so having a biracial queer companion on the most beloved sci-fi show in history is a big dang deal. Yes, it airs on BBC One in the family hour and that’s amazing enough, but the reach of Doctor Who is global. The show, but also the merchandising, the comic con appearances, the comic books, and on and on.

Okay, but! There’s EVEN MORE. You have your reservations about showrunner/writer Steven Moffat and so do I. He does not have a very good track record writing women, on Doctor Who or on Sherlock or probably even in his own journal. But this is it for him and, assuming Bill survives, the new Doctor Who showrunner is a guy you don’t even know you know: Chris Chibnall. He was basically the showrunner for the first two (best and gayest) seasons of Torchwood. He created and managed Broadchurch. And he helped develop Merlin (your Katie McGrath origin story, Supergirl Supercorp shippers) for the BBC. He knows what he’s doing and he has a solid track record of doing right by the gays.

Obviously we gotta lose the antiquated language of “companion” and obviously we gotta get a woman Doctor. In the meantime, though, Bill Potts a good step forward. I hope she has sex with Jane Austen.