I’ve been working as an editor in queer media for over a decade and in the last two years I’ve heard more people say some variation of “I don’t know how to move forward” than in all my other years combined. It’s a broad thing, sometimes, of course. How do we find the courage and hope to keep taking action to try to create change when every single day is some fresh political horror? But it’s also very much a personal thing. So many people in our community, are burned out, beaten down, depressed, anxious, frustrated, stifled, stuck. We don’t know how to accomplish the day-to-day tasks we need and want to do. I know because I see my friends and acquaintances and co-workers saying it. I know because I see it from Autostraddle readers in the A+ inbox. I know because I’ve experienced it and been caught in the tentacles of it as well.

It goes something like this: We say yes yes yes to everything. When we inevitably cannot do everything, we stop trying to do anything. We’re mad at ourselves and we’re resentful at the people we’ve disappointed by our inability to get the thing done we said we’d get done. We shut down. We check out. Our tasks remain unaccomplished, the people we’ve made promises to remain frustrated with us, and we remain unfulfilled.

It doesn’t have to be this way!

Nearly every self-care article I read offers the same advice: Once you’ve inevitably pushed yourself to your physical, emotional, and mental limits, it’s okay to flake on everything and take a bath and a nap. And yes, when you can’t go anymore, you can’t go anymore. When you’re at the edge of yourself, you’ve got to stop everything to take care of yourself. Or, you know, you could just keep going until your body literally shuts you down.

Wouldn’t it be better if we learned to keep some distance between ourselves and the edge?

Goals come in different shapes and sizes, but before you start breaking them down and crafting a plan to accomplish them, you have to know one thing for sure: What’s your ethos, your highest purpose, the thing that you want to be true about you and your life? We’re more motivated to do things we know will fulfill us, and when we have a clear sense of our guiding ideals, it’s easier to pare down everything from our long-term goals to our daily to-do lists.

Once you know who you want to be, you can start figuring out what to do about it. Begin with big goals and break them down into smaller goals and then break those into actionable tasks. The Passion Planner Roadmap (which you can download for free) is a popular tool for this, but you really don’t need anything more than a piece of paper and a pen or pencil. Essentially what you’re doing is working backward. You see yourself accomplishing something big in 2019; then you see yourself accomplishing smaller pieces of that every month; then you see yourself taking on those smaller pieces every week. Now you can prioritize your day-to-day to make sure you’re reaching for your highest purpose. 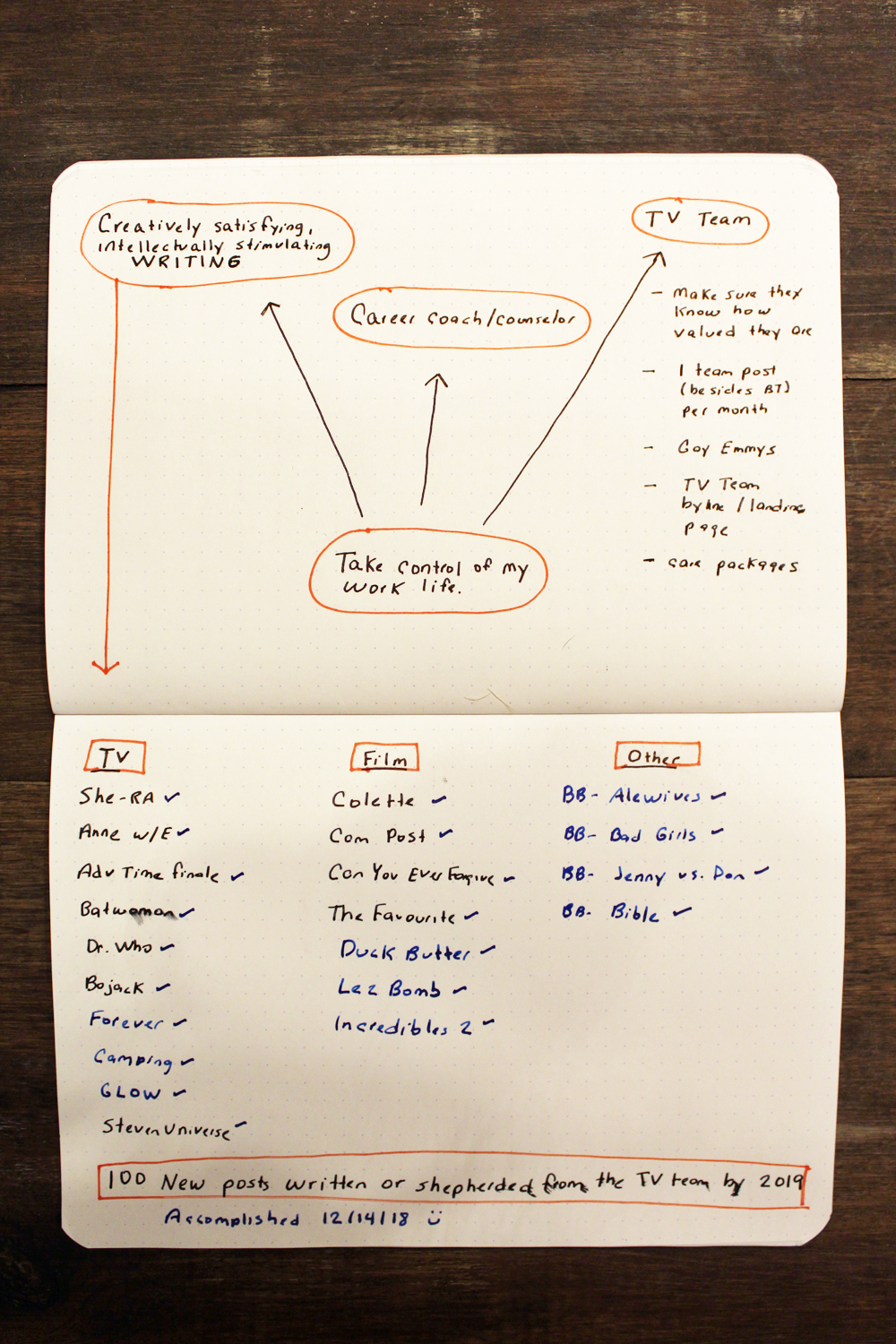 The top of this goal sheet is what I made on the plane on the way home from our senior staff shakedown this summer. I filled in the bottom as the year progressed, and as I worked with a career counselor for ten weeks. My goal was to write and shepherd 100 collaborative TV Team posts by the end of the year. We did it!

Enormous bodies of research show that the following things are true about goals.

+ You’re more likely to accomplish them if they’re specific and positive. (I will get onto The Great British Bake Off.)

+ You’re more likely to accomplish them if they’re measurable. (I will win a local baking competition with my spiced orange Chelsea buns.)

+ You’re more likely to accomplish them if you anchor them to a specific place and time. (I will bake ten hours every Sunday for five years.)

+ You’re more likely to accomplish them if they’re reasonable. (Okay, I will bake three hours every Sunday for one year.)

+ You’re more likely to accomplish them if you write them down.

You’ve done it! You’ve set goals that align with your ethos and written down a specific and positive action plan to help you accomplish them! Now we can talk about what’s going to happen in your day-to-day life to allow — nay, empower! — you to achieve those goals. It’s time for some realistic expectations!

There are two parts to realistic expectations: setting them for yourself and clearly communicating them to other people. There’s basically an entire alphabet of things you experience when you don’t set realistic expectations: anger, blame, criticism, despair, escape, futility, grief! That’s a progression of really terrible emotions to bloom from the seed of simply putting three too many things on your to-do list every day. But it’s true. When we overestimate, over-promise, over-commit, we under-deliver (or don’t deliver at all) and often end up in a shame spiral because we’ve let down ourselves and the people who were relying on us. 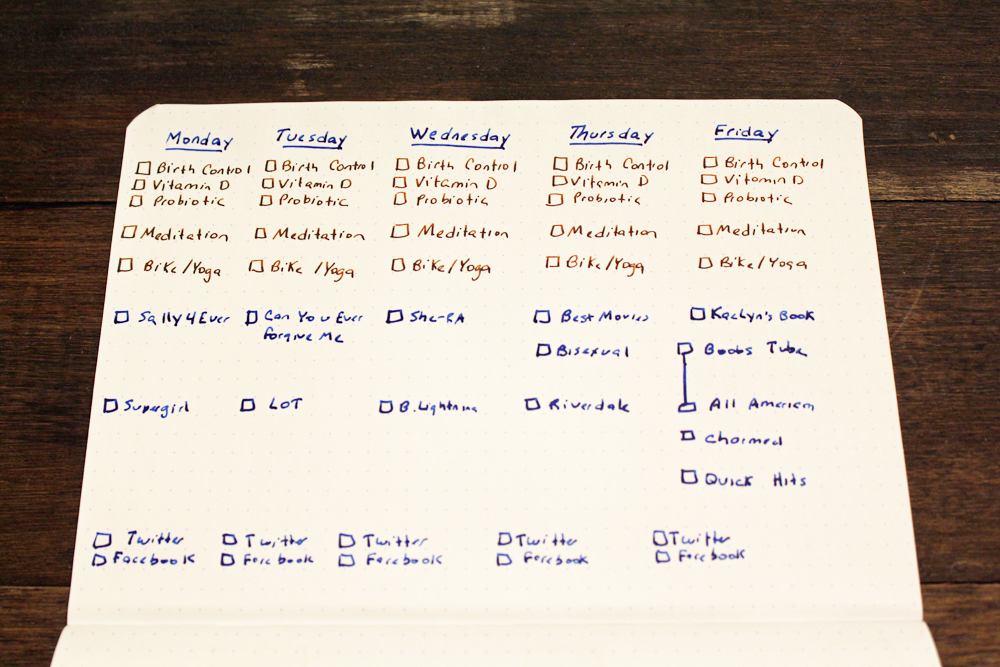 Here’s how to stop yourself before you’re hiding in the cupboard under your stairs, glowering at your phone and considering smashing it to death with a meat hammer, getting sadder and angrier at yourself and the person texting you to ask why you haven’t done what you said you’d do.

When you’re compiling your to-do list for the week or the day, ask yourself:

+ Acknowledging that my creative energy, emotional stamina, mental toughness, intellectual vigor, and literal time itself are finite resources, do I possesses enough of all of those things to get this done in the expected time frame?

+ What has the past proven to me about this task? (It always takes longer than I think it will. Someone else could do it better/faster. It’s consistently unfulfilling so I dawdle on it.)

+ Has anything changed since the last time this task was on my list? (I have an assistant now. I have delegated other tasks and now have three extra hours for this task. I’ve learned more efficient ways to do parts of this task.)

+ Who or what is creating the expectation that I do this thing? (My desire to be liked, my need to feel important, my inability to say no because I’m a people-pleaser.)

+ Does it align with my written goals and highest purpose? (If not, is it just one of those things everyone has to do because they’re adults and work is work, or is it something I could delegate, say no to, etc.)

Once you have set realistic expectations for yourself, communicate them to the people who rely on you. Bosses, co-worker, partners, friends. Let them know what you’ll be doing and what you’re unable to do. If anyone asks (or tells) you to do something that’s going to eat up one of those aforementioned finite resources, you can let them know. “As I mentioned, I have promised to make a poached pear tartlet for the local pie-baking contest, so I don’t have time to take this on right now.” Or, “Yes, but this is going to prohibit me from doing the deliciuous tartlet I told you about, so I’m actually going to need you to find someone to cover my shift for next Saturday so I can go to the tartlet-baking contest in the next town over.”

sign up for our newsletter
Related:do the damn thinghow-towe are adults now

Heather has written 942 articles for us.