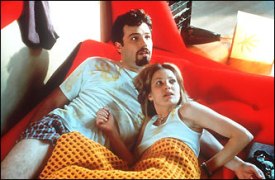 this is what this story is supposed to remind us of, but it doesn't

HEADLINERS: Drunk lesbian admits romp with naked man in police station car park: I SERIOUSLY CANNOT BELIEVE IT IS ACCEPTABLE FOR ARTICLES LIKE THIS TO BE PUBLISHED ANYWHERE IN THE WORLD and here’s why:

1) Firstly, the headline. Is “naked” the  most revelatory adjective possible for this headline? That being said, the image of a man in socks, a t-shirt and no pants doing a lady in the backseat of his car is somehow worse.

2) the way this article is written we want to ask, “Romp” or “rape”? (ETA:To clarify, we all see no-one was raped here,we are commenting on the way the story is told by The DR, not the story itself.It’s off-putting to read the details the Daily Record chose to include contextualized as a “drunken romp” when said details could also be contextualized as a less playful incident — for the man or the woman involved.) Take away the Daily Record’s chosen context and headline and there’s no indication in the story’s basic facts that Richardson that she WANTED this.

Onlookers had to “pull” Bruce away from her. Her “legs were in the air” and “eyes were closed.” She didn’t pull on her clothes ’til she “noticed police.” This statement, contextualized in a section explaining why Richardson’s partner forgave her, is defined in the article by context rather than by meaning, and it’s confusing:

“It is no secret I am gay. After my ex-partner died I said I would never be with another guy again, then I met Josephine. Josephine is my partner, she is a pretty woman and I would never do anything to hurt her.”

3) The article ought to acknowledge or acknowledge not acknowledging the situation they described sounds sketchy but isn’t, rather than contextualizing sketchy details as a “romp.” According to the comment threads on FARK, the point is that she was so drunk she did it with a dude. There’s also some choice remarks about ugly lesbians. At the Record, commenters are most concerned with why this case made the news.

NEWS FLASH: Most teenage girls think they are fat, even when they are not. And when a headline reads, “most teenage girls are living on one meal a day” — a statement generally reserved for developing nations and poor areas where children go hungry due to lack of food resources — you know the world has some serious serious issues.

THE NERVE DEBATE: Brazilian waxing — do or don’t? One half of the argument is held down by Our Lady of Prozac & Ritalin & Writing paragraphs we relate to intensely even though it’s highly uncool to say so in public, Elizabeth Wurtzel. HOWEVER: “I think we women don’t feel entirely female unless we’re slaves to beauty”? It gets worse from there, with Elizabeth arguing for Evil and the Dude arguing for Good — he seems more enlightened than she does, without a doubt.

GENDER: “Experimenting with my body and self inside masculinity has definitely been a part of my gender and sexuality coming of age, in which I had to answer the age-old question of attraction/fascination: do I want be this or fuck this? My answer, mostly, is that I want to fuck people who wear masculinities: Thoughtful Masculinity.” (@waking vixen)