In the spirit of full transparency: I’ve made three small contributions to two Democratic presidential campaigns.

Last night, the Democratic Party hosted the second of six scheduled debates of the 2020 primary season. Just like last month’s debates, the second round is a two-night event, with 10 candidates appearing on the stage each night. Each candidate who appeared on last night’s Detroit stage has either amassed 65,000 campaign donors, including at least 200 donors each in 20 states, or showed least 1 percent support in at least three polls.

CNN Is the Worst

On Sunday a teenage shooter, his mind warped by white nationalism and armed with a legally purchased AK-47, walked into a Garlic Festival in Gilroy, California and killed at least three people including a six year old boy and wounded 12 more. According to Vox, it was the 260th mass shooting of the year. It’s a tragic situation that begs a serious response and what better time to get that serious response than at a presidential debate?

In hindsight, I should have anticipated this when CNN turned the line-up drawing for the debate into a dramatic hour-long event reminiscent of NCAA Selection Sunday, but… woo boy this was terrible. After 10 minutes of Superbowl-esque graphics and introductions and some performative patriotism, we got an hour of questions that came straight out of the GOP playbook. Beyond that, CNN seemed intent on stirring controversy between the campaigns: framing every question in an antagonistic way to instigate fights between them. Despite their lackluster polling, Delaney, Ryan and Bullock earned the bulk of their speaking time by being the moderate antagonists to Warren and Sanders. Even when the candidates endeavored to answer the questions — which eventually did include topics like gun control and white nationalism — CNN stuck to time constraints that valued buzzworthy answers over serious policy debate. 15-second responses do not lend themselves to substance, they lend themselves to soundbites.

We deserved a more serious debate than this. We deserve a better media than this. 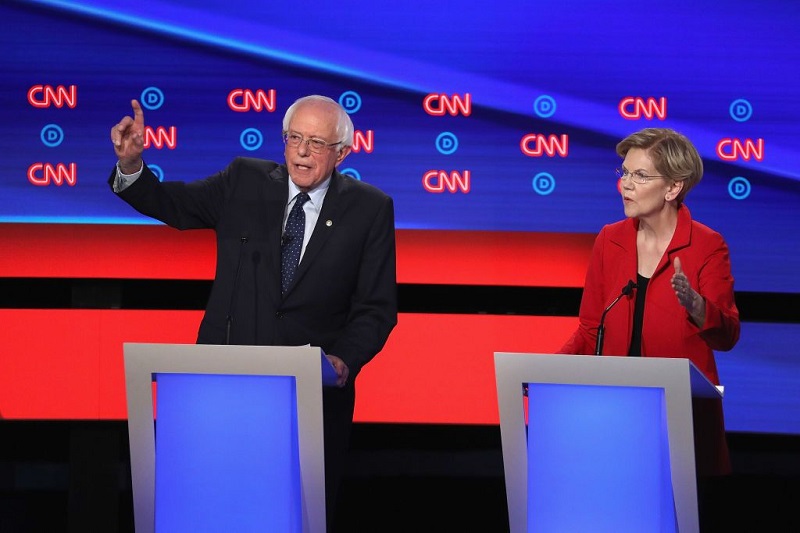 After a lackluster first debate where he faded into the background and slumping poll numbers — since the last debate, he’s hit his lowest polling numbers of the campaign — Bernie Sanders returned to the debate stage looking for a fight. I think, as a candidate, he’s at his most effective when he perceives himself to be the underdog. With Warren’s help, he batted back criticism of Medicare for All and defended the kind of wholesale, revolutionary change that’s been the center of his presidential campaign.

When Ryan accused Sanders of creating a health care system that wouldn’t provide a health care comparable to what the union receives today, Sanders pushed back firmly on the benefits of Medicare for All. Ryan continued to protest, claiming that he couldn’t know the intricacies of what his new plan would cover and Sanders forcefully responded, “I do know it, I wrote the damn bill.” When Delaney tried to join in the fray, suggesting that Sanders’ math on Medicare for All just doesn’t add up, Sanders blasted him for making money off a broken healthcare system.

“Maybe you did that and made money off of healthcare,” Sanders said. “But our job is to run a nonprofit healthcare system.”

It was a good night for Sanders. Does his momentum survive in a third debate, on a smaller stage with a more progressive slate of candidates? That question still remains, but last night certainly favored the Vermont senator.

With a shared opponent in the moderation of other candidates, Warren and Sanders never turned their ire on each other and, as a result, Warren did what she does best: communicating complicated policy in straightforward, easy-to-understand manner. While Delaney, Ryan and Bullock clung to the politically appealing, she advanced an agenda of justice.

“I don’t understand why anybody goes to all the trouble of running for president of the United States just to talk about what we really can’t do and shouldn’t fight for,” she said, delivering the line of the night and putting the final nail in Delaney’s $15 million coffin.

Because of Sanders’ propensity to yell — Ryan telling Sanders, “you don’t have to yell,” was a highlight for me — I think he undercuts himself a little and it plays to Warren’s advantage. On substance, their campaigns are similar but Warren’s style often pushes her just ahead of Sanders in scorecards.

Eyes on the Third Debate 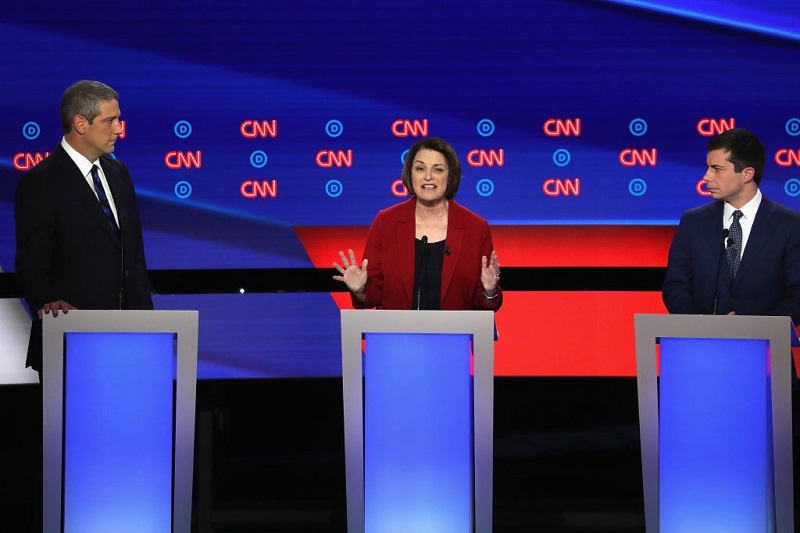 Thus far, just seven of the 24 Democratic candidates for president — Sanders, Warren, Buttigieg, O’Rourke, Joe Biden, Kamala Harris, and Cory Booker — have met the requirements for the third debates. For those still hoping to qualify for that third debate, the second debate was their best shot at creating buzz for themselves before a national audience. They needed to create a moment, akin to Kamala Harris’ response to Joe Biden in the first debate, to spike the polls (however temporarily) and get an influx of new donors. I’m not sure that any of the six candidates who appeared onstage last night did themselves any favors in that regard.

Perhaps no one on the stage needed a buzzworthy moment more than Amy Klobuchar. She’s met the polling threshold for the next debate but has, thus far, fallen short on donors. One sharp elbow on national television… at Warren, at Sanders, at anybody… and maybe she would have drawn the attention she needs to recruit those new donors, but instead, she whiffed. The President attacked a member of her Congressional delegation, Rep. Ilhan Omar (MN-5th), to open his 2020 campaign and Klobuchar didn’t even say her name in the debate. She barely answered a question about Flint. She talked about her Midwestern roots ad nauseum, but never distinguished herself from the other Heartland candidates. Her answer to the nation’s gun problem is that she will not fold. Given the opportunity to get more specific about a critique she made — “A lot of people are making promises, and I’m not going to make promises just to get elected” — she sidestepped the pitch. And then, perhaps egregiously, she said, “there are people that voted for Donald Trump before that aren’t racist.”

For someone like Bullock or Ryan, who hasn’t met the donor or polling threshold for September’s debate — and recall, they’ll need to do both by August 28th — it’s hard to imagine a stage grander than this from which to compete.

+ I thought Pete Buttigieg did well — I particularly liked him saying outright that Republicans will call us socialists no matter what we’re for — but I don’t think this format showcases him at his best. I think a debate with fewer people will give us our first real insight into the prose behind all that poetry.

+ For his first debate on a national stage, I thought Bullock did a good job. Like many governors who venture into national politics, he struggled a bit during the foreign policy section, but otherwise, I was impressed. I do wonder, though, what path Bullock sees to the nomination. Is he just there as a stalking horse to attack the more progressive candidates or does he really think he can “out-moderate” Joe Biden? Also, there’s a very nice Senate seat that Bullock could be running for and I’m mystified that he chose to do this instead.

+ Yes, Marianne Williamson delivered answers on reparations and the crisis in Flint that made her competitors look timid by comparison but we’re not seriously entertaining voting for her, right? Seriously, we’re definitely not voting for her. Yes she was right about something, but even broken clocks are right twice a day, folks.

+ How long before the enthusiasm that Beto O’Rourke built during his run in Texas runs out? Asking for a friend who’s tired of seeing his lackluster debate performances.

What’d you think of last night’s debate? Did any moments or candidates stand out to you? Any candidate that you found underwhelming? What are you hoping to see from tonight’s debate?