Last night, the remaining 10 qualified candidates for the Democratic nomination met for their first debate of the 2020 primary season. It was a very different debate than Wednesday night’s, both in tone and in substance. The high level of interaction between candidates forced issues that should have been talked about, like LGBT issues on the 50th anniversary of the Stonewall Riots and the two pivotal cases decided by the Supreme Court yesterday, aside.

Kamala Harris Is REALLY Good at This 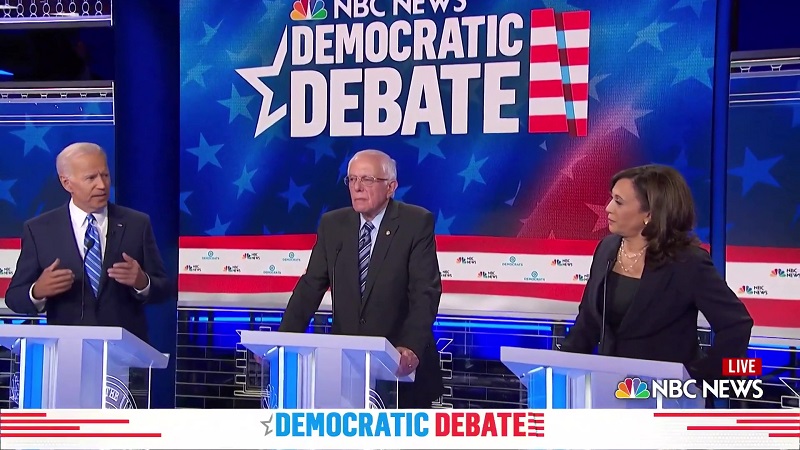 Back in March, Kamala Harris sat, as a member of the Senate’s Judiciary committee, to hear testimony from Attorney General Bill Barr. She patiently waited her turn in the order of seniority until it was her turn to question the AG. Then for the next eight minutes she dismantled Barr so thoroughly that even her 2020 opponent Cory Booker could hardly contain his glee. And yet, somehow in the 118 days since then, we all forgot how good Kamala Harris is at this… because, dear Lord, she is very good.

Harris commanded the stage almost from the opening bell: when Savannah Guthrie asked about plans to pay for each policy proposal, Harris questioned why Republicans are rarely asked to explain where the money to pay for their tax cuts will come from. Later, when the debate descended into a bit of chaos, Harris stood up and became the adult in the room, saying, “America does not want to witness a food fight, they want to know how we are going to put food on their table.”

While other candidates were just happy for the opportunity to make their case to a large audience, Harris came to Miami with the goal of showing that she’s ready for the fight to win the nomination and the presidency. No moment was bigger for the California senator than her confrontation of the former Vice President about race and his history of support for busing. She’d held on to this piece of opposition research since January, when CNN’s Jake Tapper mentioned Biden’s work on busing in an interview. It was the first direct attack on the frontrunner — aside from Eric Swalwell’s urging that Biden “pass the torch” — of the night and the hit landed so squarely on Biden’s chin that he seemed punch-drunk for the rest of the debate.

But while the busing exchange will get more airtime, I think Kamala Harris’ best and bravest moment was when she challenged Biden on the Obama legacy on immigration. It’s one thing to challenge Joe Biden on the issues, it’s another thing to challenge the most popular person in the Democratic Party today through him and, perhaps more importantly, the nostalgia Democrats carry for that time. It’s a difficult needle to thread but Harris did it, respectfully.

“I disagreed with my president, because the policy was to allow deportation of people who by ICE’s own definition were non-criminals,” Harris said. “The problem with this kind of policy, and I know it as a prosecutor — I want a rape victim to be able to run in the middle of the street and wave down a police officer and report the crime against her. I want anybody who has been the victim of any real crime to be able to do that and not be afraid that if they do that, they will be deported, because the abuser will tell them it is they who is the criminal.”

Whatever you think of Kamala Harris’ politics or her history, it was hard to watch last night’s debate and not salivate over how she would eviscerate Trump in a debate.

The Tale of Two Candidates

No candidate goes into a debate knowing what the questions will be but it’s usually pretty easy to anticipate a bulk of them. Candidates and their staff do hours of debate prep, honing their responses on key issues — health care, the economy, climate change — and developing answers for any hot topics that are permeating the news cycle. For all the candidates, the recent pictures of the lifeless bodies of Oscar Martinez and his 23-month-old daughter Valeria meant that they’d have to come prepared to talk about asylum and family separation. And when controversy ensnares your own campaign, as it has recently with Pete Buttigieg and Joe Biden, you walk into the debate knowing that you’re going to get a question about it.

Buttigieg had to know he’d get a question about Eric Logan, the 54-year-old black man killed by police in his city on June 16. Since the shooting, the city’s been awash with protests and the anguish of its black residents has made its way from South Bend to the pages of the New York Times. Buttigieg may not have known what form the question would take but, certainly, he knew that he’d be asked directly about it, so he prepared… and took the opportunity to try to respond differently than he did in his widely criticized performance in a community meeting after the incident.

Rachel Maddow asked why the demographics of the South Bend police department didn’t reflect the community it served and Buttigieg replied candidly, “because I couldn’t get it done.” Whatever steps he’d taken as mayor, whatever good intentions he’d had, they weren’t enough because Eric Logan wasn’t able to come home to his mother. It was brave and honest answer, one that offered more insight into the type of leader Buttigieg would be than anything substantive he could have said at that moment.

Contrast that with Joe Biden. As is his wont, the former vice president’s mouth got him into trouble earlier this month when, at a fundraiser, Biden talked about the “civility” that existed in 1970s Washington, even with ardent segregationists like James Eastland of Mississippi and Herman Talmadge of Georgia. His 2020 opponents pounced on the suggestion that segregationists were models of any sort of civility, and Biden was indignant about suggestions that he apologize. It caused Biden’s campaign enough consternation that the former vice president was compelled to meet with the Congressional Black Caucus. With that controversy a little over a week old, of course, Joe Biden was going to be asked about it in this debate. He knew it, his campaign knew it, and yet somehow the candidate wasn’t at all prepared for it.

Harris pivoted off the answer given by Buttigieg about South Bend’s police department to talk about race and busing and then directing her argument right at Biden… somehow, he never even saw the question coming. He stumbled to come up with a response, grabbing for one flimsy explanation after another. He accused Harris of mischaracterizing his record — spoiler alert: she wasn’t — and offered “states’ rights” argument in favor of busing… in a Democratic debate… in 2019! Biden did so poorly, he called “time” on his own answer.

Like Buttigieg, Biden could have avoided the entire mess if he’d shown a little bit of humility and empathy in the moment, particularly given that Harris couched her critique in very personal language. He could have admitted that he was wrong to oppose busing and reflect on how much he’s learned since but he’s unwilling to live and learn… a prospect that’s far more worrisome for the Biden campaign that one errant response in a debate.

Of the 10 candidates participating in last night’s debate, Bernie Sanders spoke for a total of 11 minutes, finishing only behind Biden and Harris. He had a few good moments, particularly when he promised to beat Trump by exposing him as a phony and a fraud. But somehow, it seemed like the Vermont Senator disappeared from the debate.

In 2016, Bernie Sanders was able to easily distinguish himself from Hillary Clinton with a strong set of progressive policies. He ran to her left on nearly every policy issue, advocating for things like for Medicare for All and free college. But there’s been a shift in the Democratic Party since then and now the ideas that Sanders touted in 2016 have become much more mainstream. And while that shift might be great for voters and, ultimately, for the country, it puts Sanders in an unenviable position. The glow from his previous run has worn off and voters are looking at new candidates touting those same ideals. In the polls, Elizabeth Warren’s been the great beneficiary of the loss of luster but, on last night’s stage, I think it played to Kirsten Gillibrand’s benefit. When Sanders faltered, she stepped in — most of the time without being called on — to address their Medicare for All bill and “corrupt capitalism.”

Beyond the substance of it, though, there’s a style issue with which the Sanders’ campaign has to contend. Nothing Bernie Sanders said last night felt new. If you paid any attention to Sanders’ rhetoric in 2016 — which, if you’re engaged in the 2020 campaign this early, you probably did — you heard a lot of same talking points. It’s incumbent that Sanders switch the style, if not the substance, of his campaign up so it doesn’t feel like voters have been listening to the same song for the past three years.

What’d you think of the second night of debates? Did any moments or candidates stand out to you? Any candidate that you found underwhelming? Was there an issue you would’ve liked to hear the candidates address.

Next Democratic Debate: July 30-31 in Detroit, Michigan (hosted by CNN)