If you’ve been on the Vapid Fluff train for a while, you know there’s nothing I love more than breaking celebrity romances, and boy does this one deliver. I’ve been waiting for SO LONG for Demi Lovato to publicly date a woman and while I would probably have chosen someone else (like uh, myself), it seems that MAYBE they are ALLEGEDLY seeing fellow singer/songwriter Noah Cyrus, little sister of Miley. Let us examine the evidence!

In March of this year, rumors began surfacing that the pair had been spending quite a bit of quality time after collaborating on Demi’s track “Easy.” Page Six cited one source who gushed, “They’re very close and have been hanging out,” solid evidence if I ever heard it. Another anonymous source called the rumors “weird” and insisted, “They have dinner sometimes, but they’re not romantic… They got together for this song that sorta came together a bit last minute, and they hang out.” Dinner??? Sounds suspicious!

A few short weeks later, fans began noticing Demi referring to Noah as “baby” in assorted Instagram stories, while for her part Cyrus reshared these Instagram stories with the added caption “mine mine mine.” If you’ve ever been goofy-level infatuated with someone who is Very Online, this behavior probably sounds familiar.

On June 25, Demi and Noah performed their song “Easy” together at YouTube’s pride event. Demi posted the picture above, to which Noah replied, “thank you for having me ❤️❤️❤️ you were effortlessly perfect and im never not in awe of u 😢😢😢.” Details remained sparse at best, and their interactions still seemed plausibly platonic, but fans continued to speculate.

Finally, Demi and Noah attended a party for Space Jam: A New Legacy at the Six Flags in Valencia, California. In outfits I can only describe as “extremely queer,” Lovato and Cyrus brazenly held hands in front of the paparazzi. Onlookers such as Lola Bunny and Tweety Bird could not be reached for comment.

This move is very reminiscent of that time Demi held hands with DJ Kittens at Disneyland, the first time we ever saw them publicly exhibit signs of a relationship with a woman. At the time, we were desperate for crumbs of proof that the “Cool for the Summer” singer was dating women, or literally anyone besides Wilmer Valderrama/beefy MMA dudes. We were so excited we actually squeezed two articles out of it. Look how far we’ve come! 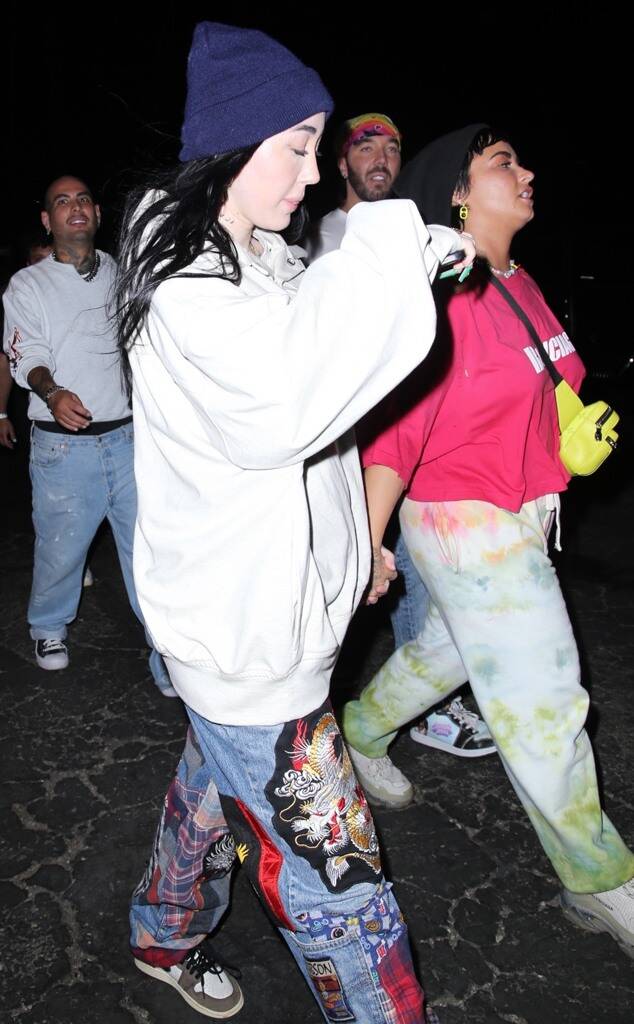 Since then, yet another anonymous source has made the bold decision to come forwards and tell E! News that Demi and Noah share a “creative and spiritual bond” and “love that they can share their love for music with each other.” However, the source clarified that “they are not exclusively dating by any means,” but instead “hanging out” and “enjoying each other’s company.” Please note that these are actual quotes but also me speaking in innuendos with air quotes. The source also added that the pair “have been leaning on each other for ideas and creativity” and probably also leaning on each other in many other ways.

Admittedly, as I am an Old, I do not know as much about Noah Cyrus as I might, but I am fiercely protective of Demi Lovato and their continued sobriety. I do know that “I Got So High That I Saw Jesus” singer Noah Cyrus smokes a tremendous amount of weed, while Demi has been consuming alcohol and marijuana in moderation. I just want everyone to be safe!!! I hope they eat a ton of cookies together and go to many Space Jam parties at Six Flags!!!

Vapid Fluff will keep an eye on this breaking story as it develops.