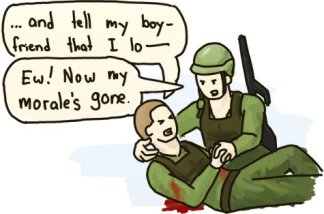 The flurry of activism of all shapes, sizes and colors surrounding DADT might have gotten your hopes up that legislators and military officials are feeling the pressure, and that maybe the nebulous timeline surrounding its appeal (or even the process of looking into its potential appeal) might speed up a little. Well, Defense Secretary Robert Gates wants you to settle down right now with all that optimism: he says the plan to review and research before making a decision on DADT is unchanged.

“…his letter to members of Congress Friday immediately angered gay rights advocates who fear the administration isn’t moving fast enough to repeal the ban on gays and lesbians serving openly in the military… “Our military must be afforded the opportunity to inform us of their concerns, insights and suggestions if we are to carry out this change successfully,” Gates and Adm. Mike Mullen, chairman of the Joint Chiefs of Staff, wrote…”

There are a few things going on here. One the one hand, there’s nothing wrong with letting people share their “concerns, insights, and suggestions;” for instance, I have many concerns and suggestions re: Robert Gates that I wish someone would let me share with him. On the other hand, given the recent demonstrations and agitation by gay veterans, it’s really hard to read this as anything other than a direct rebuttal – telling Lt. Dan Choi and others to simmer down because the feelings of straight service members are more important. And ultimately, much as we all love sharing feelings, is it really necessary or even ethical to make this decision on a straw poll of how other people feel about it? When it comes to issues of equal rights for minorities, referendums are just inherently unfair. Maine proved that; Prop 8 proved that. Why is this a thing we’re doing? Someone explain this to me? (@csmonitor)

In the meantime, Nancy Pelosi has suggested a remarkable thing: that until this gets sorted out, we stop discharging GLBT servicemembers. How crazy!

“We all look forward to the report on the review of the ‘Don’t Ask, Don’t Tell’ policy by the Defense Department,” Pelosi said Friday evening in a statement. “In the meantime, the Administration should immediately place a moratorium on dismissals under this policy until the review has been completed and Congress has acted.” (@thehill)

And the obvious question, of course, is where Obama stands. Kind of unsurprisingly, he doesn’t give us a lot to work with one way or another. I feel like the main vibe I’m getting from him is “exasperated.” In an exclusive with the Advocate, the White House has said

“The President’s commitment to repealing “don’t ask, don’t tell” is unequivocal. This is not a question of if, but how. That’s why we’ve said that the implementation of any congressional repeal will be delayed until the DOD study of how best to implement that repeal is completed. The President is committed to getting this done both soon and right.”

All this occurs in the context of the huge DADT protest in Washington yesterday, attended by Dan Choi and GetEQUAL protesters, in which six more people were arrested after chaining themselves to the White House fence. (Choi was not among them, having abided by his order to stay away from the property.)

Howard Dean made a surprise appearance!

+
More coverage of the protest available at Pam’s House Blend, Queerty, and Joe My God.

Last but not least, our friends at Wingspan Pictures made this Don’t Ask Don’t Tell testimonial video lest we forget what this debate is actually about – the fact that there are people who are putting their lives on the line for all of us, and the country they protect doesn’t even want to know about their families:

A draft of an immigration reform bill floating around Congress right now would allow GLBT people to sponsor their same-sex partners for residency. “On page 22 of the 26-page document, which could serve as a blueprint for the legislation, the proposal states, “It will eliminate discrimination in the immigration laws by permitting permanent partners of United States citizens and lawful permanent residents to obtain lawful permanent resident status.” (@theadvocate)

Our boys done good! David Boies and Ted Olson of Prop 8 trial fame have been included in the TIME Magazine Top 100 list, along with such luminaries as Lady Gaga. (@thebilericoproject)

It appears that administrators at the Catholic school where Lisa Reimer teaches have always known she was gay, but it was only after parents complained that they fired her for violating the “values” that the school upholds. (@vancouversun)