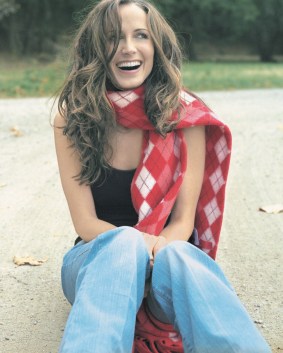 Hey remember that time we floated the “Shelby Lynne is coming out on Cinco de Gayo” theory, and then her publicist would neither confirm or deny it to Gawker, so then someone who knows someone at People magazine got itchy about the false rumors and tipped Queerty that it wasn’t Shelby, it was Chely Wright, and then TMZ stole Queerty’s story, and then we told you about Chely Wright, and then People was like, wtf, this is our story, and then People released a sneak-peak of Chely’s Big Gay Day on their website? Probably not that last part, ’cause it JUST HAPPENED. Here’s what People has published:

Country singer Chely Wright’s reasoning was sound. “There had never, ever been a country music artist who had acknowledged his or her homosexuality,” she tells PEOPLE. “I wasn’t going to be the first.”

But now Wright is changing her tune. “Nothing in my life has been more magical than the moment I decided to come out,” she says.

Wright, 39, recalls of her youth in the South: “I don’t have a memory in my life that doesn’t include the dream of making music.” But during her childhood and rapid ascent to fame in the county world, she also experienced a community in which homosexuality was shunned. “I hid everything for my music,” says Wright.

The singer-songwriter, who has won both an Academy of Country Music and a Country Music award, will later this week release her memoir, Like Me, as well as her first album in five years, Lifted off the Ground.

She’ll also appear on the Today Show Wednesday to discuss her personal journey.

We really feel at this point it’d be smart for Shelby Lynne to come out on Wednesday as well, so that there’d be TWO of ’em. Although there’s a lot of like folk-country crossover shit happening with lesbians, but apparently not big enough to catch anyone’s attention.

Read for yourself, from mystar, a Malaysian newspaper:

MORE than 100 people turned up for a wild lesbian party held at a nightspot in Kuala Lumpur on Saturday, Kosmo! reported.

The evening’s entertainment included games where blindfolded participants placed stickers on their bodies where they wanted to be licked, the daily said. Some participants were reported to have also taken off their clothes to take part in the games.. Guests were also entertained by sexy dancers, the daily reported.

.. a source said she has previously sent an e-mail to religious authorities complaining of the matter but lamented that no action had been taken.

So Derrek Lutz wore a dress to his prom in New Jersey and guess what happened, he was crowned prom king! Some queer prom stories really do have happy endings, y’all. (@queerty)

Bitch Blogs rounds up their Blogging About Disability Day. (@bitch)

It is really is fucking impossible to be 14, amirite? (@jezebel)

Amanda Seyfried was scared of sex: “We have to be open-minded. I’m not saying American’s are narrow-minded – I’ve lived in New York and Los Angeles – but where I grew up in Allentown, Pennsylvania. there was a small-town mindset that made me feel that sex was wrong. When my sister lost her virginity, I thought that was dirty and disgusting, and I was scared of sex. I remember I had a fight with my friend when I touched a boy for the first time and I didn’t tell her. She got mad with me, not because I didn’t tell her, but because I’d done it in the first place. “ (@female first)

Congratulations to Emily Wunderlich from the University of Wisconsin LaCrosse, the winner of OUTmedia and Campus Pride’s Be Queer, Buy Queer contest! She will be the proud recipient of $10,000 of OUTmedia entertainment, and our undying love. Here’s her video!

As you know we more or less worship Jezebel. Their decision to re-publish/”syndicate” this post on Jezebel about how celebrating the release of Britney Spears’ un-airbrushed photos was stupid and body image issues are irrelevant to the feminist movement, which can really only be explained by a desire on their behalf to spark controversy & its accordant page views while absolving themselves of responsibility for the content of the post because it wasn’t by a Jezebel writer, sort of rubbed us (and the Jez-commenters) the wrong way. Anyhow we’re over it and back to worshiping them, but regardless, Happy Bodies has a fabulous post called “why this matters” in response to the Jez post, which you should read!

And then, back to Jezebel, for the story of another fashion magazine editor (ELLE, this time), clearly driven insane by her lettuce-and-mustard diet, once again makes ridiculous claims on morning television like that Elle McPherson is not skinny, and that “Average Women Are Not Inspired By Women Who Look Like Them.” (@jezebel)

This post is about a horrifying and shocking tragedy against a young woman and the words the press used to describe it. It’s not going to make you feel good, but it is said well, well said, and worth your read: This is Not an Analysis of Rape Culture. This is a Rant. (extreme trigger warning this post details child abuse and rape) (@curvature)