Dating Download is an ongoing series where Shelli, Dani, and Drew try out the latest or most overlooked of dating apps so you don’t have to. Today they’re giving you the full download on Struck, the astrology-based dating app that pairs you with astrologically compatible matches.

Shelli Nicole: So — I hated this app. The only thing I liked about it was the layout. It looks really pretty and def gives me good old early aughts AIM vibes and I love a pastel color palette, other than that — it’s a no for me. 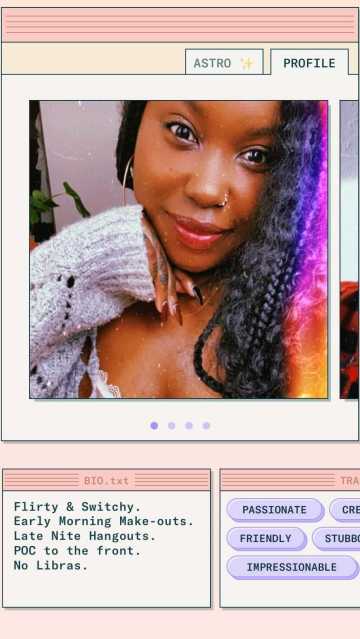 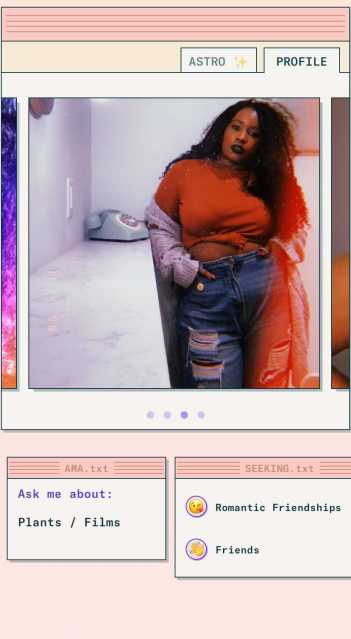 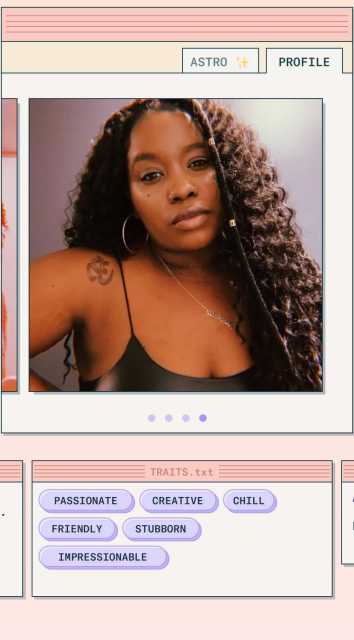 Also something exciting is about to happen… BECAUSE I SO DISAGREE!!

Shelli: I love that!! I am ready for all the opinions.

Dani Janae: I was very turned on by the concept as I have made very public that I am on the hunt for a Taurus wife. I told someone recently that I’m a “baby astrology queer” meaning I know my big three and really understand nothing else so I was on board and excited to see who I would get paired up with based on the premise

Drew: I feel like I only recently claim a level of knowledge beyond baby astrology queer, which is where I was living for awhile. But my relationship to astrology isn’t so concrete that I went into this with any specific mission. It just seemed like a fun instigator for flirting since inevitably on other apps astrology is often brought up anyway.

Shelli: I was hoping this would just be a cute little moment where I would connect with a few hot Virgos but it didn’t happen. I think the app is geared towards folks who take astrology TO FUCKING HEART. That’s fine, but I’d rather talk about it lightly in text and bring it up sporadically when they do something that “fits” their sign.

Also — I do not share my entire chart with folks. I excused it for this app because obviously it’s embedded in it but any other time, nah. It’s my cosmic social security number and I learned my lesson from giving it out so carelessly in the past.

Dani Janae: Oh for sure, when I saw they show your whole chart I was like HM interesting choice! It’s not like people could do damage with that info but it felt super revealing.

Drew: I love sharing my whole chart because when I only share my big three I feel like the story of who I am is incomplete. It’s why I say I’m a Sag Venus in all my dating app bios. 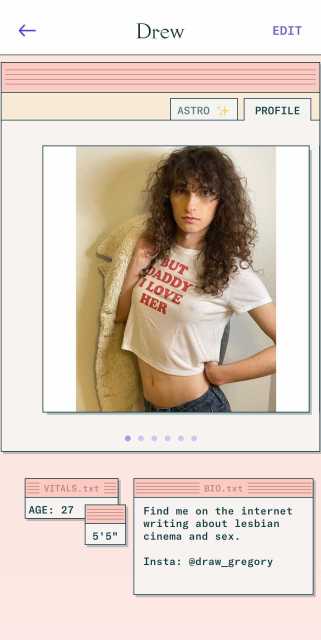 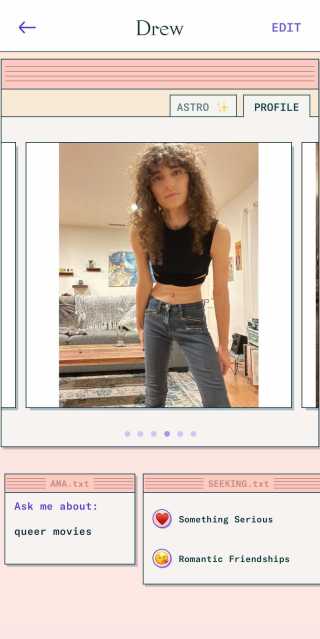 Shelli: The app in its entirety makes me feel like that high-key. I mean, if your knowledge of astrology is on mostly “The Big 3” end, you are going to have no clue what things like houses mean and their importance. Yes, the app gives you a bit of limited information when you click through their astro chart but it’s a very surface layer meaning you know?

Also, the majority of the conversations—  were just around astrology, instead of a conversation starter. It’s like, girl if I didn’t want to talk about anything but my chart for 3 days I would have gone somewhere and paid for a reading.

I did love “Hide me from straight people” — very to the point and I liked that.

Which brings me to the main thing I love about the app… it’s not even the astrology part. It’s the conceit itself. Four people a day, can only message one.

I think at this point in the pandemic I just feel so burnt out from dating apps and all the swiping and there’s been something really nice about every day getting my little notification, looking at four profiles, and usually deciding “you all seem nice but not for me!” Getting rid of dating apps altogether felt sad to me, but keeping the options to a minimum has been nice.

And because the app feels very geared towards queer people (like that “hide from straight people” option, like how it tells you to have a glass of water after you send a message) I felt like the people it showed me were people I might want to know or would know in community. There were no straight people, no couples, very few people with their pictures overfiltered.

Shelli: I got very limited matches; those damn clouds only showed me cards like a few times. And out of those few times only twice was I interested in any of them.

Drew: Oh that’s a bummer. I’ve been shown people every day for the past few weeks except maybe once.

Shelli: Not having to swipe, swipe, swipe was refreshing thought. It was kinda like a friend sending you a message every few days like “Hey, I saw this person’s IG, I think you might dig them but no pressure.” It wasn’t as pushy as the other apps can be.

Dani Janae: I’ll also agree that I hardly talked astrology. I would look at someone’s chart to see why the app thought we were compatible but that was it. I also loved how chill it was as Drew mentioned. Only four potential matches for whatever period of time? Very cool. I had to adjust my parameters a lot to get matches though. 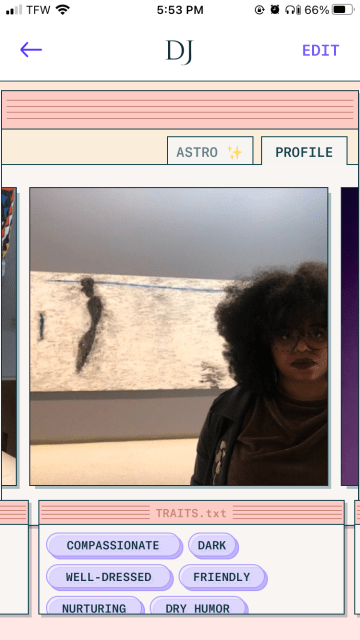 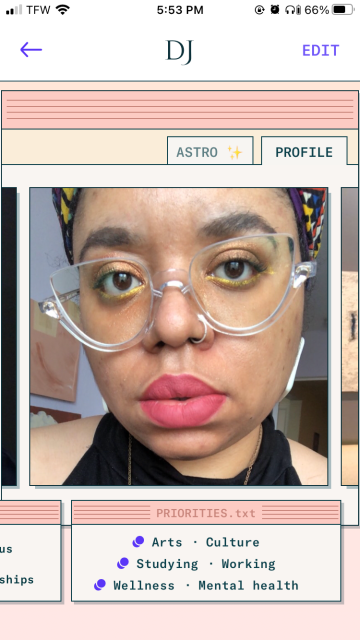 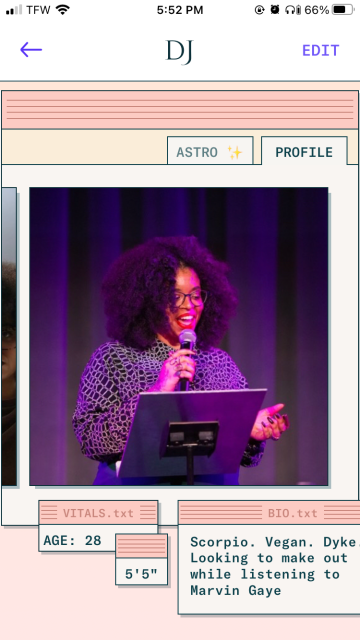 Shelli: A LOT. But again as we have said before, that’s not fully the app’s fault. Or is it? Because, market better, so more people can get on it!

Drew: For me knowing someone’s chart is a context to get to know them, not any sort of determining factor. Even if someone has the exact opposite of my theoretical dream chart I’ll still talk to them if they seem hot and cool.

I can definitely imagine the app being frustrating with fewer people. In LA it’s been pretty good.

Dani Janae: Yeah there is hardly anyone on it right now. I cheated to get access to it so everyone is in New York or LA for me, which is like, I’m a lesbian so I should be able to do long distance, but it’s not ideal.

Shelli: See Drew, that’s the vibe I want a lot of folks to have, but I feel like it will ultimately be the reverse as it expands. Folks who come to the app with a staunch stand of (probably rightfully) rejecting whatever sign(s) and get no play or come off hella judgemental in the initial message exchange.

Drew: Ugh I’m sorry you had that experience! I really don’t like that approach to astrology.

I should admit that part of my experience of the app was influenced by the fact that I have a Libra I’m crushing on hard and have been talking to a bunch and so I’ve been pretty busy flirting separate from apps. I think I might’ve been a bit more impatient with the four people a day, very few matches part of this six months ago.

Shelli: I get it right, like for me, I talk a lot of shit about Libras and wanting them to let me be. BUT if a bad bitch approaches me and happens to be a Libra and we connect like wild — will I be a bit worried, yeah, but will I write her off completely, probably not.

Drew: See isn’t this fun how I love Libras and you are very suspicious of them. Someone out there for everyone!

(A different Libra did break my heart a little last year so maybe I am just foolish who’s to say !!)

Dani Janae: Lol I’m that way about Pisces, but I wouldn’t write any hottie off.

Shelli: Maybe a small part of me also hoping this app would give me a yummy Libra to get a little toxic with.

Shelli: I think queer folks would dig the fuck out of this app though. Especially those who are looking for a different dating app experience and are looking for things to be chill. Maybe someone who is already doing some flirting and kicking it with folks already and doesn’t want to be completely removed from the apps but not totally invested either.

So it makes sense to me that your experience went well with it Drew.

Dani — I have never kicked it with a Pisces!

Drew: Knowing the three of us it doesn’t surprise me that we are not usually drawn to Pisces. Two of my best friends are Pisces and I’m just like… yeah we would never date. But again that’s just a sun sign! Who knows! There’s a whole chart and a whole person.

Shelli: Did y’all see the cute ass hats the app has?

Dani Janae: No I don’t think so!

Shelli: I feel like we should all be sent one — along with a little flower to queerly tuck behind it.

I also love their little celebrity match finder. I got Constance Wu which um yes please.

Dani Janae: I got Nicole Byer and Selena Gomez!

Drew: I also think it’s a good idea because maybe people will download the app to do the celeb match finder and then stick around. I want every city to have as many people as LA!

Shelli: I got Rihanna!

Drew: Talk about a Pisces we would all want to date !!!!!

Shelli: Yo, I also wanted to say that it would be easy for this app to be faking all this connection by charts stuff but they have an actual astrologer advising them, and also — their FAQ on the site is one of the most thorough I’ve ever seen for a dating app.

They basically go “This is as real as you think it is babe, but what we are saying is we fuck with astrology heavy so try it if you want.”

Drew: Yeah I like that. I am very much #TeamStruck.

Shelli: I was very Anti (get it?) at the start of our convo but now I’m a tad bit less so.

Dani Janae: Lol I’ve been holding a convo with a cutie that’s 2000 miles away.

Drew: The Libra I’m flirting with fully lives in Toronto.

Drew: We are who we are.

Shelli: But for real — give us hats tho.