Daniel M. Lavery tried to explain why he was sitting outside as he spoke to me on the phone from New York in January. He said that, after many California winters, “I had no sense of a winter coat as an adult and thought ‘I will wear my regular coat with a sweater underneath,’ but I was wrong.” He had bought a real coat; he was sitting outside.

Trying desperately to be okay with not enough — and the goodness that comes from giving up that ghost — is a prominent theme in Something That May Shock and Discredit You, Lavery’s new collection of essays. The book will be out Feb. 11 with Simon and Schuster and published under the name Daniel Mallory Ortberg. 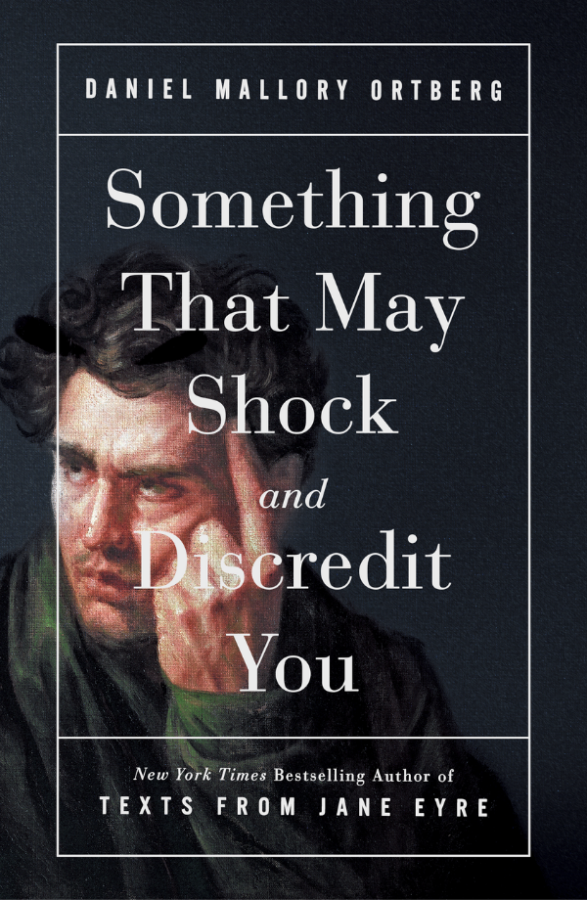 In the essay “The Stages of Not Going On T,” he writes, “I think everyone should get the chance to try going on hormones, except for me. I’m the only person who shouldn’t take hormones. God, can you imagine? Me? On hormones? I imagine it all the time, and I know it would be terrible.” This seems sometimes to be a universal experience for queers under late capitalism, proclaiming everyone I love deserves every good thing and at the same time I had better figure out how to be content with only and exactly what I already have.

I interviewed Lavery in 2018, when we both had different names, about his short story collection The Merry Spinster. He was then on the precipice of sharing his transition publicly and had already decided that hormones might not be so terrible after all. I wrote the piece without any pronouns. The autobiographical parts of Something feel borne from a place like that, of in-betweens, not-yets and I-could-nevers. It’s a great treasure that we also get to read the turns-out-I-coulds. Through the stories Lavery chooses to share, we see a glimpse of what it means to grant oneself permission. Here is the line that led me, two weeks after my own top surgery, to throw the book down so I could get up and take a lap even though there were only ten pages left:

The year I asked for top surgery, five years into sobriety, was the first time I admitted publicly to having a body and wanting to do something about it, something I could not, or at least had not, done before. Part of the reason I did not think of top surgery as being primarily organized around any sort of removal, at least physically, was because I thought of there being more of me afterward, rather than less.

And my God, if that’s not what wanting is!

new! tiny! piercing! they made me take all of my piercings out for top surgery so i lost all of my little adornments. i really missed them but it’s taken me like 18 months to start replacing them. relatedly i have an ADHD screening session set up next week lmao. it’s….overdue i think

Something is not a trans memoir, at least not in the vein of Redefining Realness or Amateur (both of which I loved). The second chapter includes titles for the transmasculine memoirs he did not want to write, including “What If Masculinity but in a Soft, Sort-Of-Drapey Jacket,” and “Liminal: In which the author refers to himself, alternately, as a ‘gender rebel,’ ‘smuggler, ‘real-life-sexual-crossing-guard,’ and, for some reason, a cyborg.”

So what is it, if not memoir? Lavery admits that he struggles with marketing copy and summaries, which is fair enough for a book that covers House Hunters, “Dirtbag Sappho,” and creation theology. The book is more or less about, as he put it, “religion because of Jacob and pop culture because of Columbo and transition because of me.” The pieces range from autobiographical essays to irreverent explorations of pop culture, Biblical texts, and iconic figures. (He struggles at times to contextualize or justify the things he becomes fixated on: “It feels like asking me ‘why do you want me to be alive,’ and it’s like, because I am, and it’s nice!”)

The Merry Spinster had the advantage of being fiction. With the beloved and sadly defunct The Toast, which he co-founded in 2013, and with his online newsletter The Shatner Chatner, he is able to expunge ideas as his whims demand. Writing autobiographical non-fiction for print was “an opportunity for a different pace and a different kind of movement than I usually permit myself,” Lavery said.

“I was so anxious about, is this becoming confessional? Is this being curated toward acceptable vulnerability so that someone will walk away from this book liking me?” he said. “It’s not that I don’t want to share experiences with people, especially other trans people, but I don’t want relatability to encompass everything.”

The book avoids the pitfalls of meaningless relatability by being exquisitely specific and making plenty of room for the reader to have their own opinion about whether Duckie from Pretty In Pink is A) a lesbian or B) redeemable, or to consider the way their own religious upbringing might affect their emotional life as an adult regardless of how much anxiety about the Rapture that upbringing may or may not have contained. Lavery ignores the parameters of genre altogether to produce a book that is original, poignant and fucking weird. Most of all, it feels true. Lavery’s penchant for titles is here in full force (the book’s title is a Simpson’s reference), with gems like “‘I Love Your Vibe’ and Other Things I’ve Said To Men” and “It’s Hard to Feel Sad Reading Hans Christian Andersen Because It’s Just Another Story About A Bummed-Out Candlestick That Loves a Broom and Dies.”

When I asked him, “so what do we do with the Bible?” it may have been a bit self-interested — I’m in divinity school and ask myself this question daily. Something contains, for starters, a transing of the Apostle Paul, liberal use of liturgical phrasings, and an extremely funny re-telling of Mary and Martha.

“It’s a very old book written by a lot of different people about a lot of different things, so there are things about it that are objectively interesting. But also, it’s been implanted in me since I was 4, so I try to make it a slightly more interesting refrain. Right now I have a pessimistic answer; there are times when I would talk about the power of writing yourself into a narrative, but right now it’s that it’s the drumbeat inside my head and I can’t Eternal Sunshine of the Spotless Mind it out. I’ll have a different relationship with it in five years.”

This relationship to fluidity, a mix of suspicion and acceptance, carries throughout Lavery’s life and writing. The Merry Spinster came out in the middle of things — the middle of a name change, the middle of a palpable shift in the way he related to the world — and so shall Something That May Shock and Discredit You. In the last quarter or so, Lavery has unexpectedly and painfully become estranged from his family of origin and also married his magnificent wife Grace in the T4T wedding extravaganza of the century. Questions of family, duty and abandonment make themselves known in the book, and though some last minute edits shifted certain particulars, those concerns still hold sway. The answers have, perhaps, become clearer in the wake of abrupt loss and new joy.

“I have a hard time experiencing pain for five minutes, I want to fix it fast. I would like to mourn for half an hour. I desire to pretend,” he said. “That gets less sustainable when you’re in the kind of relationship where you would like to be married and say ‘I would like you to see me and really know me.’…I have invited someone to become deeply intimate with me and I no longer get to dictate all the terms of that intimacy. What does it mean to not get to resort to some of my old strategies of putting off difficult experiences when I am experiencing them in a community of people?”

If it’s terrifying to want things, wanting them in front of other people is harder. Growing up with the Rapture as an undercurrent in his religious life, he had to “be ready for community to not exist, for everyone else to get pulled away.” Sometimes the work of queer community is sifting through our closets to figure out what we will take with us and what we will leave behind. Through the work of transition, he writes in “Pirates at the Funeral,” “Unremarkable, everyday things became wildly impossible; baffling, sometimes contradictory, profoundly daunting things become possible and shortly thereafter absolutely necessary.” Becoming oneself in a community is the queerest story we’ve got. In Something, Lavery tells that story again and again in strange, delightful ways.