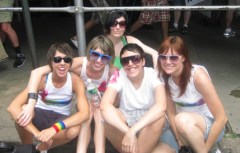 Laneia’s latest “Now What?” column talks about how women are investing in our future with Now What? Damn the Man! Women Small Business Owners Will Save the (F)empire!! And in Honor of NYC Pride, Riese has returned to recapping The L Word, starting with (most of) episode 211: Loud & Proud.

But the good news is, because we are so spectacularly hungover and behind on life news of the raffle is making its merry way all over the internet, we’ve decided to extend your ticket-buying opportunities. Y’all can still buy raffle tickets ’til 8 P.M. EST tonight ’til July 1st!

We don’t want to cut off the when it’s still burning so brightly like like the life of Michael Jackson the life of Dana Fairbanks. For example, read “Cool Stuff Happening on Autostraddle.com” on Craftster.org right now!

This will be a gradually evolving Daily Fix as we gradually get our shit together. We are still all Team Hangover after the Rodeo Disco Pride Party. We are going to stop talking about ourselves and stop talking about the world in like two days promise.  My number one feeling is that I wish everyone who is reading this right now could’ve come to our party and my number two feeling is I can’t get out of bed.

UPDATE #1 FROM PRIDE: Check out Team Autostraddle before the pre-parade part of marching in the Pride Parade, courtesy of Joe.My.God: 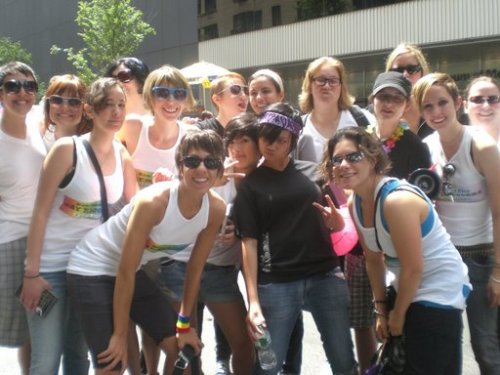 O RLY: Gay Consumers’ Media Habits Mostly Mirror Mainstream, though researcher was “surprised to find gay consumers to be more tech-savvy than the general population.” We are less surprised. (@adage)

GAY: Which pro athlete will come out of the closet? The evangelical Christian organization Athletes in Action, with connections to groups that promote reparative therapy for gays and lesbians, holds sway in many locker rooms. (@sfgate)

GENDER SHMENDER: This is like what Riese’s Mom tried to do, but these people are doing it even more stealth and incredibly: “We want Pop to grow up more freely and avoid being forced into a specific gender mould from the outset,” Pop’s mother said. “It’s cruel to bring a child into the world with a blue or pink stamp on their forehead.” – Swedish parents keep 2-year old’s gender secret. (@the local)

WOMYN-ON-WOMYN CRIME: Cancer conwoman jailed for £100,000 scam of lesbian lovers: “A 53-year-old woman who trawled through lesbian and gay websites looking for victims for a “cynical and cruel” con in which she claimed to be dying of cancer has been jailed for four-and-a-half years.” (@stalbansreview)

VIP GAY: Here is this year’s roster of the 101 most influential gay and lesbian people in Britian today: “As an out-and-proud American, Ditto should not really be allowed on this list – but the UK-based singer exerts more influence over British music, fashion and cool than many a politician. Her new album, Music for Men, was praised by this paper, and her plus-size range at Evans has been popular.” (@independent)

LILO: Still in shock over the passing of Michael Jackson, Lindsay Lohan has taken to her Twitter account to post a tribute picture in remembrance of the King of Pop. … Oh, and she’s in her underwear. (@celebrity-gossip)

GAGA: Lady Gaga at Glastonbury 2009: Her dancing, bizarre mid-song banter and costumes (including a boob flamethrower!) provided at least as much entertainment as her music. (@guardian)

OBAMA: Obama meets with gay leaders: In his remarks at the event, Obama defended his stance, saying upholding current law on “don’t ask, don’t tell” does not diminish his pledge to eventually overturn it. (@boston)