Today on Autostraddle: Get your recap fix with Crystal from Australia’s complete recap the controversial lesbian storyline from Aussie soap Home & Away! And Green interviews indie author Carissa Halston!

Carly’s Tuesday Televisionary column will actually appear on Wednesday, which is very NewNowNext of her.

1. omg. Just when you think it couldn’t get any worse, the latest interrogation tape stars …. ILENE FUCKING CHAIKEN!!!!!  She wants us to listen to her so bad, it makes me feel weird for her. Maybe she OD’ed on beta blockers in 2006 and just couldn’t stop taking more of them. Seriously, this is too easy. I can’t even make a joke. Sidenote; I’m afraid to watch it. Someone tell me what happens.

4. EVERYONE is on Twitter! Have you heard of Twitter? Every American television host seems to be thinking: “dangnabbit, we are NOT gonna be the last ones to report on this thing, you know, we can’t have another FACEBOOK.”

This is from E! The Soup:

5. Really Papi? Some guy asks Is Jennifer Aniston a lesbian? This article inspired A;ex and I to brainstorm who we could randomly “out” for no reason citing redic “evidence” to attract attention/traffic and eventually we decided on Julia Roberts or Jessica Simpson. Thoughts? (@ianundercover)

The Logo website has some hot “behind the scenes” photos (Robin Roemer’s, of course) — look, it’s our backs and the sides of our faces! And in “The after-party” section — it’s the front of our faces! Tinkerbell looks beautiful.

7. Twelve years after Yale rejected a $7 million endowment for a gay student center, the school’s Gay and Lesbian Association invited legendary playwright and gay-rights activist Larry Kramer back to campus to receive its first Lifetime Achievement Award. The following is his speech: Yale’s Conspiracy of Silence (@the daily beast)

8. If you are like me and don’t live in Los Angeles, you missed the best concert of 2009! Never fear, Haviland Stillwell is here, singing Jenny Schecter’s favorite song, “Crazy”!

9. Also speaking of us, Carlytron had a birthday party last weekend. There was dancing. Riese wore a bathrobe and a sock on her arm. 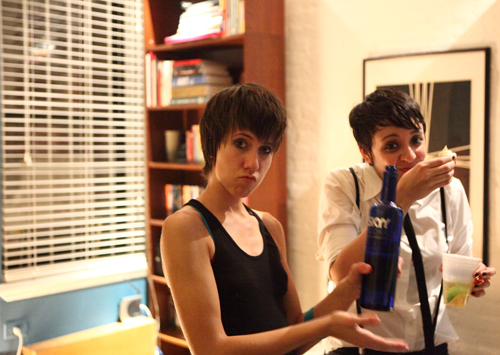 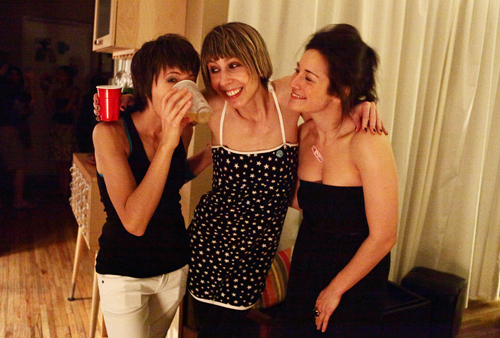 Riese is a Space Robot, Natalie thinks A;ex is funny 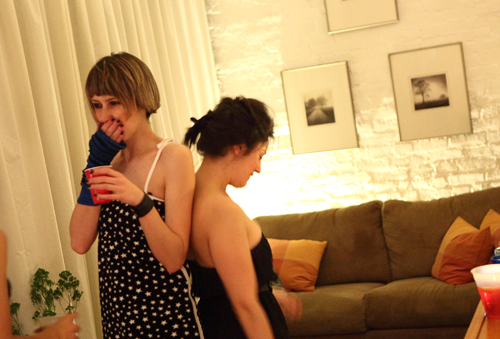 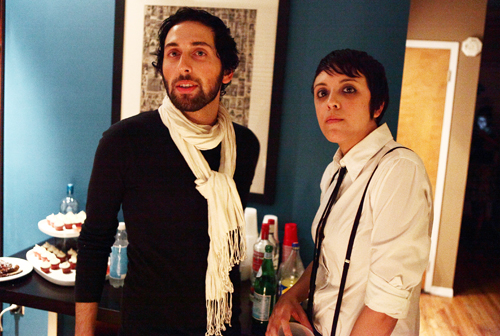 The Birthday Girl & Her Gay

10. And Oprah wants to know why women leave men for other women.

from Riese: Confession: Ever since they added gays to the mix, I’ve often read the Weddings/Celebrations section of the New York Times on Sundays just to see if there are any same-sex unions.  I don’t think this is related to my own feelings about marriage (terror, mostly for the other person who volunteers for the spot) but rather to how far and wide and low I will go for a gay love story. This week, it’s Eve Ellis & Annette Niemtzow AND Lucia Maria Fuentes & Irene Maria Recio and they all sound super adorable!! I love it when they do the VOWS, here’s a cute one with these two gay men who met in the 70’s! Here’s some cute lesbians getting married. Whazoo!

from Green: You may think I’m only sending you to this site because of its name, and you’d be half right — GreenIsSexy.com is chock full of eco-living tips, like cleaning with lemons, and doing your part to stop companies from using wasteful packing products. Is it hot in here, or is it just me? Kisses to Irish Vicki for the tip!