The Democrats are going for it: they’re trying to push a repeal of Don’t Ask Don’t Tell through the lame-duck Congress, and hope that they can make good on their promises before the newly elected Republicans make it all but impossible. The repeal is bundled together with other, more popular initiatives, but John McCain still succeeded in filibustering it when it was up for a vote a few weeks ago. It seems pretty safe to say that he (and most, if not all, other Republicans) will vote against it. (@wapo) 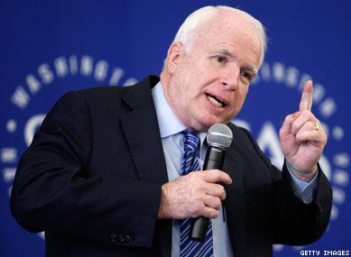 The wild card is that mysterious study that the Pentagon has been working on regarding troop’s feelings on DADT and “how best to move forward with a repeal.” As we’ve chronicled, the more we’ve learned about this study, the more apprehensive we’ve grown. All the evidence we’ve seen points toward a study that was basically designed to be the perfect storm of anti-gay sentiment, and that the way it’s structured (wrong, basically) makes it likely that the results will be pretty anti-repeal. Apparently some people have seen parts and/or a draft of the results, and this is the (confusing) rundown:

A draft of the 370-page assessment has found that the ban could be lifted with little harm and that most troops don’t object to the change in personnel policy, according to officials familiar with its findings. But it also found that some troops had serious concerns with repealing the law. Military officials have warned that even scattered resistance to the change could pose logistical and discipline problems for field commanders.

That seems contradictory and confusing to me, and I’m curious about what our lawmakers will make of it. There’s no date set for the vote yet, but it’s scheduled for “after Thanksgiving;” the study results will be released December 1st. I’m not going to say that this is our last best chance for ending DADT in Congress, or that this had better work because the Democrats have effectively closed off every other option at this point; I’m just going to say that according to Albert Einstein, the definition of insanity was doing the same thing over and over again and expecting new results.

[Also have you seen this]