Oh hey did you watch the new video for Christina Aguilera’s single “Not Myself Tonight?” Probably, we’re a little slow to the game for this one because we couldn’t decide if we cared or not. Luckily now we have lots of other opinions at this point too to share with you. Here, firstly, take a gander:

There are a lot of spikes, leather, and bondage gear that I don’t even know what it’s called in this video; there are also a lot of people upset about similarities between this video and Gaga’s stuff. Are you one of them? Do you have feelings about the overt bisexuality themes? Are you mostly just interested in the scene where Xtina unties that girl’s corset with her teeth? If you’re not sure how to feel, we have helpfully rounded up some other peoples’ opinions for you:

+ Hortense at Jezebel: “Everyone steals from everyone in pop culture: if you look solely at the work of music’s platinum blondes over the past 30 years or so, you can easily find style similarities between Christina and Gaga and Gwen Stefani and Madonna and Dale Bozzio of Missing Persons and Debbie Harry of Blondie and Cherie Currie of the Runaways and Wendy O. Williams of the Plasmatics, not to mention the influences each of these women brought to their own style via hundreds of years of icons that came before them. Aguilera’s “Not Myself Tonight” (again, NSFW) may have similarities to many of Gaga’s videos, but the major influence is clearly Madonna, who also pops up as a major influence in Gaga’s work, most notably her recent “Telephone” video.” 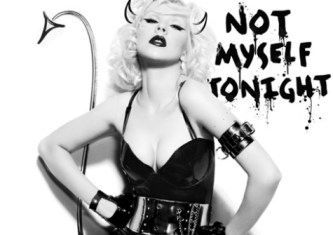 + Queerty: “The mainstream female pop music category has, for months, been dominated by a one Lady Gaga. Christina, a former reigning queen of this genre, took some time off to have a baby and put on a deep red lipstick, but returns with a creative video for what’s really a mid-level song. Bubble dresses and cigarette sunglasses aside, we’re pleased to have another thin blonde re-enter the fray.”

+ Christina: “It just comes with the territory. That, in particular, is not even worth wasting the breath to comment on,” she told the Bert Show on Q100 in Atlanta Tuesday morning (April 20). “I’ve been around for over a decade and I think my work speaks for myself. [When I was younger] I would have engaged, been a little upset [about the comparisons]. There’s a bigger picture out there. I’ve got my son, my family, my work.”

+ MTV: Has a really good rundown of all the references and homages of the video, but really we just want to talk about Bad Romance: “From Christina’s cat-like crawl across the floor to her red lingerie, there’s a whole lot of “Not Myself Tonight” that’s reminiscent of “Bad Romance” though, for brevity’s sake, let’s just focus on the black pair of Carrera shades she wears at the beginning of the video. Gaga can be seen rocking an identical pair in “Romance,” although hers are white.”

QUEERTY HAS A BETTER VIDEO WITH GIRLS MAKING OUT IN IT:

New favorite Gaga rumor: There’s a rumor circulating that Lady Gaga had her leg amputated, including this “quote”: “This is the latest fashion I’m starting… I’m a world leader when it comes to wacky and weird shit.” (@gawker)

Also, if you missed it, we figured out who logically must be coming out on May 5th on People Magazine’s cover. Because there’s nothing like a false positive to inspire a tentative tipster to leap forward and set the record err—straight— this pontificating led to our intended result: now we know for real who’s coming out on May 5th: Chely Wright. (via gawker & queerty)

Chris Colfer was on Ellen being super cute and like mega funny and talking all cute about Lady Gaga!

We love finding out about new artists! Photographer Allison Michael Orenstein has a new series of portraits focused on transpeople and “creative types.” They are, in a word, smokin’. (@theadvocate)

As far as I know Paris Hilton hasn’t done anything in like two years; I like to think that she was just waiting for the right opportunity, namely to work with Ellen. We can’t embed the video, but trust us, you will not regret clicking over. #perfect (@queerty)