It should come as no surprise that I prefer narrative-driven games. They were the very first thing I wrote about on this here website, and I think close to half of the games I’ve reviewed since then have been visual novels. What can I say? I’m a sucker for a good story, so I usually prioritize that above perfect mechanics or exceptionally challenging gameplay.

I’ve been playing Horizon Zero Dawn for the past few months, and I was first drawn to it, as usual, because of Aloy and her story. (And, well, because Ashly Burch. Duh.) And although I did for sure engage with the story from the beginning, it wasn’t until the first combat that I was fully hooked. I mean, holy smokes! I get to hunt and ride giant robotic dinosaur things? That’s cool as heck. Even though the controls are complex, everything feels remarkably intuitive and challenging in a good way.

It’s very possible that the approximately one million combat hours I’ve put toward HZD so far might be why — for the first time in recent memory — I sought out a game specifically because of its gameplay instead of just its story. Celeste is that game, and I’m here to tell you that it turns out that it’s is so much more than just a collection of very difficult levels. (But it’s definitely that, too.) 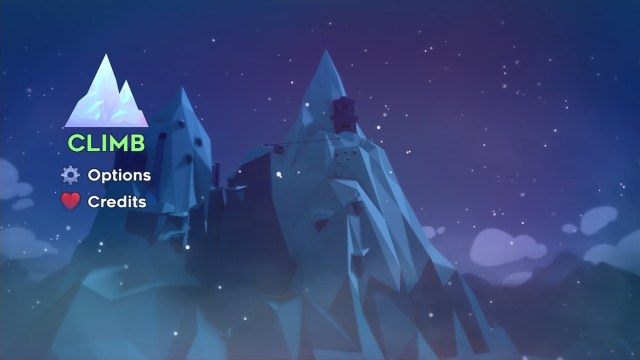 Celeste is a game about a girl named Madeline. She has come to the notoriously perilous Celeste Mountain with a single-minded focus: she will reach Celeste’s summit no matter what. It becomes clear pretty quickly that Madeline is at a crossroads in her life, though we never find out exactly what events led her here. What we do know is that she feels like she has something to prove — to strangers, to her mother, but mostly to herself.

It’s incredibly relatable. Who hasn’t, at some point in their life, wanted (or needed) to do something big and tangible to prove that they aren’t a failure? Maybe your goal, like Madeline, is to climb a mountain, or maybe you want to run a marathon or to finish that novel, or whatever just popped into your head as you were reading this — whatever that thing is — it’s something you can point to and say, “Hey. I’m not a total fuck up, see? I did this.” 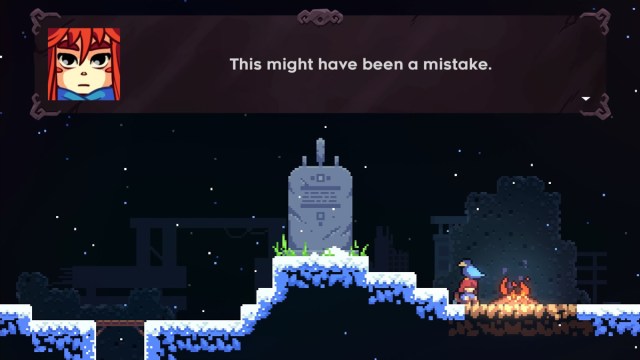 Getting there, though, is no easy feat. Celeste’s gameplay is probably the most challenging I’ve come across. There were multiple stages that I stared at for seconds, or even minutes, before attempting, because they looked actually impossible to complete. The main controls are fairly limited: you can move, crouch, jump, dash, and hang onto or climb vertical surfaces (but only for a limited time — stay there too long and you’ll slide down). The trick is combining them in just the right way; dash a split second too late or land a few inches too high on a wall and you’re dead. 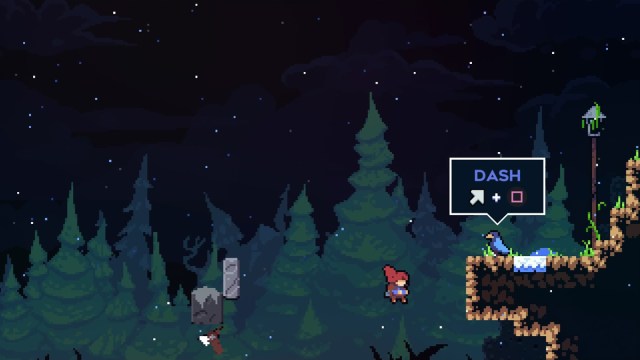 And I sure did die a lot! Like, hundreds of times each level amount of a lot. Thankfully, it’s not permadeath (I think then it really would be impossible) and you rarely lose more progress than whatever you can see on the screen at the time. The game evolves as you make your way up the mountain, with new challenges like fire and wind appearing at different points. Luckily, the game also introduces mechanics to help, too — things like green diamonds that give you an additional air dash if you pass through them. 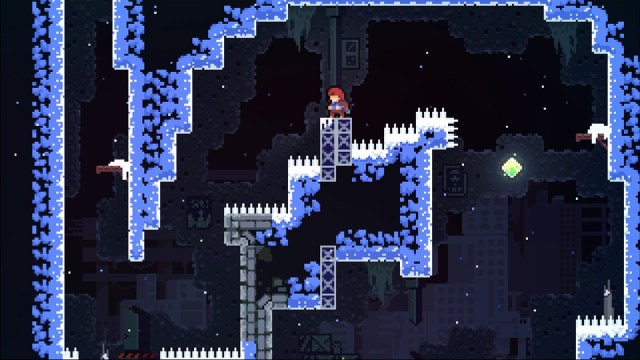 In retrospect, this is actually a relatively easy stage.

Even though the game is hard, Celeste lets you control how tough you want things to be with something called Assist Mode. Using Assist Mode, you don’t just change the level of difficulty using preset options, you can instead adjust specific features to decide exactly how much help you need for any given stage. You can do something as minor as slowing the game speed down to 90%, or as major as turning on invincibility and giving yourself an infinite amount of air dashes. 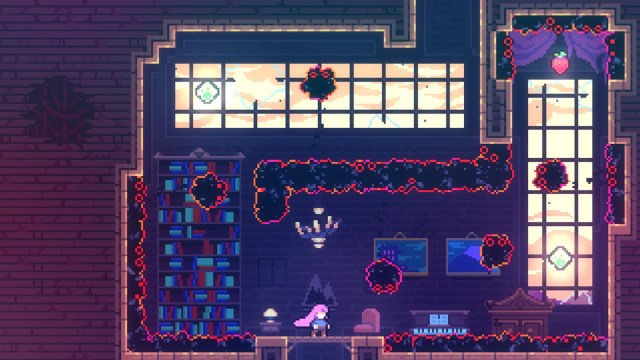 Visually, Celeste combines several different styles: 8-bit for the actual gameplay, smooth 3D modeling for the title/instruction screens, and illustration for the end of chapter scenes. On paper, it seems like it should probably be a disjointed hodgepodge of art, but somehow it works and each style brings a different dimension to the game. The color palette is consistently gorgeous, full of cool and vibrant tones, and it helps to tie everything together. 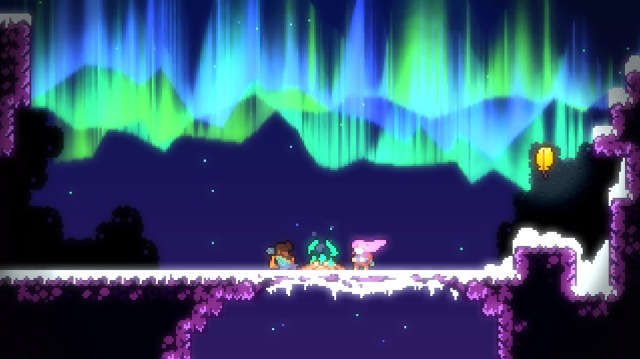 Not to be outdone by the visuals or gameplay, the sound throughout the game is also absolutely top notch. Celeste’s soundtrack is beautiful; the music scoring the mood of each stage perfectly, whether it’s triumphant or suspenseful or haunting or something else entirely.

And even though the dialogue is all written and only “spoken” in a vaguely adults-in-Peanuts kind of way, the voice acting is super expressive. When Madeline was scared or sad, her little voice hurt my heart. I’m not sure how to fully explain it, but it’s somehow very cute while being tragic and distressing all at the same time?

Also very cute is Theo, a fellow hiker that Madeline meets along the way. I will admit that I was a bit wary of him at first — I didn’t want Madeline’s journey of self-reflection to turn into a story about how the love of a boy can save you. Thankfully and happily I can tell you that there is no compulsory heterosexuality in Celeste! In fact, the most romantic vibes I got from the whole game were when Theo was maybe trying to set Madeline up with his sister. (At least, that’s how I read that scene.) 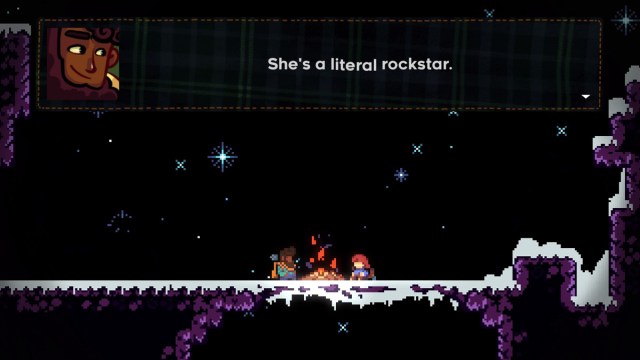 As they make their way up the mountain, Theo reveals himself to be a very good friend. He helps Madeline breathe through a panic attack and Madeline returns the favor later by rescuing him from a creepy temple. But even with Theo along for the ride, the story remains Madeline’s through and through. It’s all about Madeline’s obstacles — both on the mountain and within herself — and she doesn’t need any saving to overcome them.

And how does Madeline overcome her obstacles? Well, you do not have to worry about any specific ending spoilers here, because when I finished Celeste it was after playing D&D/drinking beers for several hours. I turned on the aforementioned invincibility and infinite air dashes, and I just absolutely tore through the last few chapters.

Way back toward the beginning of the game, when I first turned on Assist Mode, there was a disclaimer about how Celeste is supposed to be very challenging and that they recommend playing without help your first time through. At the time, I thought it was a little gimmicky, but now that I’ve finished the game using Assist Mode aggressively I do wish I had heeded the warning more seriously and used the features in Assist Mode as more of a last resort.

Even though (or maybe because) I didn’t complete all chapters of the game without help, I really enjoyed the resolution of Madeline’s journey. Along the way, her attitude shifts little by little. Madeline still wants to summit Celeste Mountain, but the desperate notion that all of her self-worth is tied up in this one climb slips away as she learns more about herself. It’s a really affirming and satisfying game, especially if you’re like me and tend to put a lot of pressure on yourself.

Celeste is available on lots of platforms — I played on PS4, but you could play on Switch or Xbox One or PC/Mac/Linux, whichever you want! I adored this game so much; I am already planning to attempt another playthrough without Assist Mode despite my ever growing “to play” list of new games.