Horizon Zero Dawn was announced at E3 in 2015, along with every other game I have been excited about ever since then, up to and including the new Mass Effect which comes out later this month. As such, I kind of lost track of it in the chaos, which was nice because I never felt like I was waiting for it to come out. It just sort of appeared, fully formed, like a herd of robot horses, which is a thing from this game and not a nonsense thing I just made up. I read some early reviews and the consensus seemed to be Surprised By How Good This Game Is. Even going into it with that expectation, I am really surprised by how good it is.

The setting is a post-post-apocalypse, which seems to be the same as a regular post-apocalypse except prettier. In it, we find a man with a sweet dad-bod and an equally sweet baby. He climbs a mountain and does kind of a Lion King thing, and now the baby has a name: Aloy. We are also told, for the first of many times, that Aloy is an “outcast”, even though she is just a baby and can’t possibly have done anything wrong, and no, nobody will tell us why just yet.

The game then skips ahead to Aloy as a toddler, and honestly this scene was pretty heartbreaking. Aloy sees some children gathering berries and bringing them adults and getting praised, so of course she tries to do the same thing and is shunned and it’s awful. I cried. I mean I was very PMS-ing when I started this game and I spent the first hour or so crying, and I’m not sure how much was over how sad this part was and how much was about how beautiful the lighting is.

But anyway, upset about being SHUNNED at like 5 years old, Aloy runs away and falls down a hole into a ruin of The Metal World, which is basically our real life world except a little more awful. (Another thing I was crying about actually is Young Aloy’s running animation, which is so fucking cute.) In the hole she finds a relic on a dead body. It’s called a Focus. It connects Aloy to the old world, and it’s the macguffin that sets the plot in motion, but we don’t know that yet exactly. 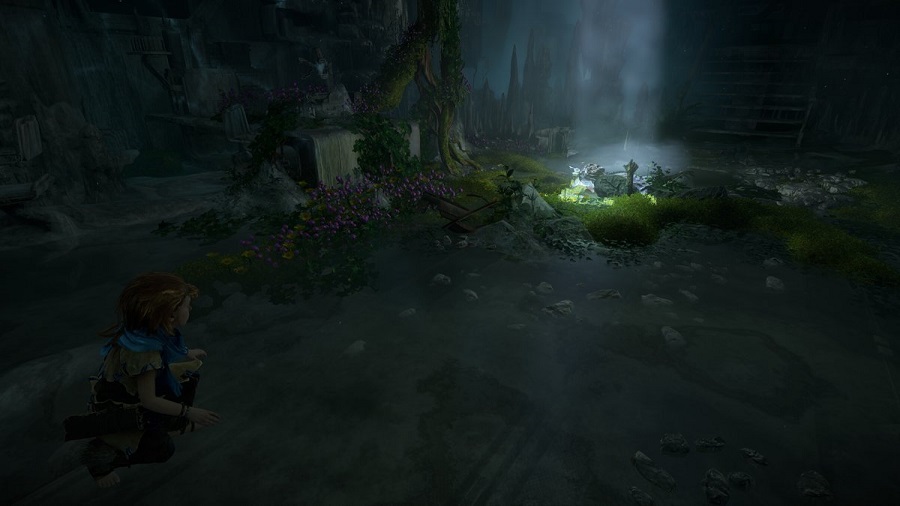 This is no place for children.

Eventually Aloy makes it out of the pit and is bullied even more and decides she wants to grow up to become a warrior so she can find out why she was cast out, and Not-Dad is a sweet supportive gentle viking who walks us through a tutorial of hunting robot dinosaurs, which are things that exist but nobody knows how or why. There’s a classic training montage, and then Aloy is all grown up and kinda hot and suddenly very ready to face the world. She has to prove herself capable to become a member of the “tribe”, but of course nothing ever goes as planned and adventures are always bigger than adventurers expect them to be.

The plot that opens up from there is about revenge and the hunt for knowledge and eventually about saving the world. The story never exactly surprised me, but the way it unfolds made it seem more inevitable than predictable. To stop the new world from ending, you need to find out how the old one ended, and the answer is: horribly, avoidably, and sadly. Really really sadly. And infuriatingly. This is a really beautiful apocalypse you guys. 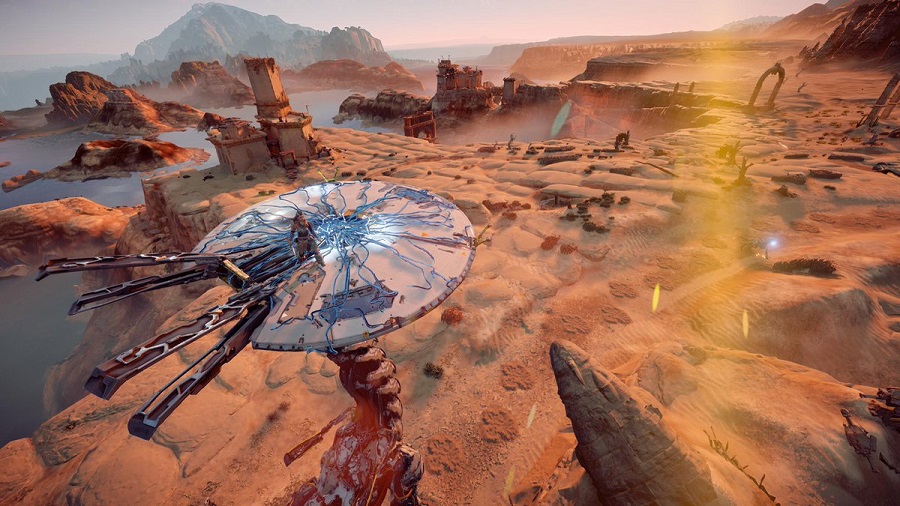 The game-play is a little bit of a mess, but in a good way? Sometimes it’s a stealth game, luring small machines or bandits close while you hide in the tall grass for a sneak attack. It’s also a giant action game, pitting you against machines 10 times your size while you dodge-roll out of their way and try to pick them apart with a bow and arrow. There’s climbing/parkour, which means there is falling to your death off derelict skyscrapers and Tallneck dinosaur robots. (The first time you make it to the top of a Tallneck is a beautiful moment, and the first time you rappel back down to the ground instead of jumping off and dying like a dummy is maybe even better.) There’s also a crafting system that’s mostly just a pain in the butt since resources are so plentiful it feels like busy work, but it can add some tension to epic fights when you have to craft more ammo in the middle of combat. My favorite parts, though, were delving into the old places, where there isn’t much action at all, and finding pieces of the puzzle of the end of the world. Aloy doesn’t always understand what she’s finding, but we do, and it’s rough watching her catch up to us. 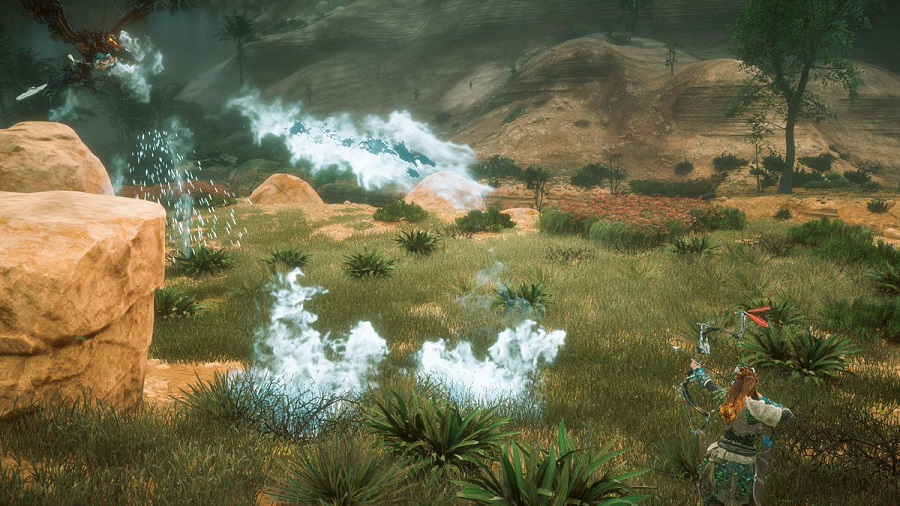 It’s a big weird mess, but I mean, they even manage to make the existence of robot horse herds make sense. It all comes together in the end. It’s a pretty beautiful story.

As a protagonist, Aloy is likable enough if not fully realized. There’s a Mass Effect-style dialogue choice system that can sort of shape her personality, but it doesn’t show up very often and feels a little half baked. She also suffers from the solo nature of her mission; her relationships with other characters never have a chance to get too deep, and she was raised alone, so she isn’t really a part of the larger world. Without a real home, it’s easy to lose sight of what she’s fighting for.

I think the world is really the main character of the game though anyway. We’re really getting into the first wave of games developed specifically for the current generation of consoles, and this one is gorgeous. The grass ripples when you walk through it, and the light filters through the trees, and the draw distance on the landscapes is endless. I run all over the map instead of fast traveling just because I love looking at everything, and because maybe I want to pick a fight with something huge on the way. The way the machines move is so lifelike you forget they’re not alive a lot of the time, to the point where I felt a little guilty “killing” some of them.

Everything is just a joy to look at. The game knows how pretty it is, too: They included a dedicated Photo Mode, where you can pause the game and rotate and pull the camera back and add filters to get your perfect screenshot. It’s dorky as heck and I am addicted to it. I am also addicted to climbing the tallest things to collect “vantage points” which are beautiful views of the right now world overlaid with sad pictures of the old world. And also with zip-lining or rappelling down from those great heights afterwards, which in 40 hours of game-play has not yet gotten any less exciting. 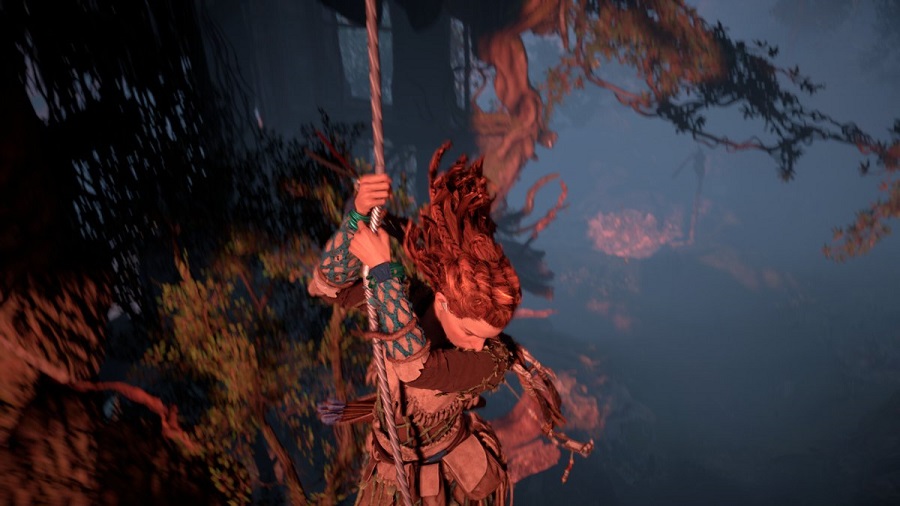 It’s not all positive though. The game has been criticized for appropriation of Indigenous culture and for use of language historically used to denigrate Native peoples. This was something that bothered me throughout the game, though I’m not knowledgeable enough to have pointed out the specific issues. But the aesthetic and cultures of the “tribes” in the game immediately made me uncomfortable. They felt like they were built piecemeal from existing cultures or from a Pinterest board titled “primitive”. The in-game culture doesn’t feel original, or inspired by the events of the very believable world they’ve created. It feels stolen and mismatched. I think this was one of the reasons I was more invested in the historical story than in the actual events of the game.

I believed in the world that was, and in its end, but I just don’t see how this new world sprung up in this shape. There is a lot of diversity in the supporting cast and NPCs, which is refreshing, but then the protagonist is super white and is saving the world with her advanced technology and I don’t know. It’s a lot. These issues aren’t unique to this game or to games at all, but they’re here and they mar what is otherwise a great game. (You can read more about this from Native writer Dia Lacina over at Medium.)

I was interested in this game originally because it had a girl protagonist, but I figured it would wind up being a generic action game. I was way wrong about that. It’s not nearly perfect, but there is a whole lot to do and the potential for a lot more. Based on the ending, it seems likely there will be a sequel, but I’m more interested in a prequel even if we know how it will end. Like a Rogue One to this game’s The Force Awakens. Either way, I want more. Preferably with even bigger robots this time.