This is a co-by both Cee and Eli, who both attended this year’s 4th Annual Lesbians Who Tech Summit last weekend in San Francisco. We also both attended the first summit, so this was our second time going.

This year there were over 2,200 people in attendance, which is MUCH bigger than the first time we went. The topics included: Technology + The Resistance, Cybersecurity, Cloud, Data, Hardware, Machine Learning, A.I., Healing + Community, Virtual Reality, Engineering and Entrepreneurship. This year’s summit focus shifted after the election. To quote LWT, “After the election we regrouped and approached the Summit with a fresh point of view to take the Summit beyond technology. We reached out to leaders who are rising up and using tech to lead the fight on issues of reproductive rights, LGBTQ rights, systemic racism and sexism, and more issues at the intersection of power and freedom.” 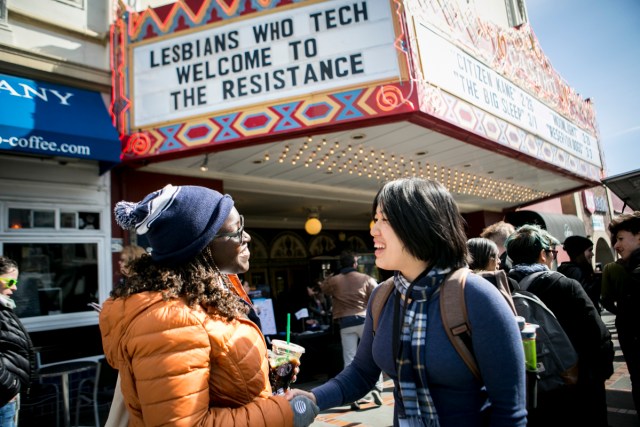 The keynotes this year covered a wide range of topics, some about technology, but most about LGBTQ issues and social justice. The best part of the keynotes was how many of them felt actionable as an audience member. There was a legitimate and diverse range of queer and trans women and non-binary folks on stage, and Lesbians Who Tech made and upheld a commitment to have 50% non-white speakers, and the range of content noticeably reflected this diversity.

Eli: Some highlights of the keynote speeches included Patrisse Cullors, co-founder of #BlackLivesMatter, who spoke on “Fighting Systemic Racism While Simultaneously Healing” and I don’t really need to write any more than that. She is dynamic, motivational, and nothing short of heroic. She spoke about the origins of #BlackLivesMatter, and what it means to really show up for each other as minorities living in treacherous times. During this talk, I felt the potential for Lesbians Who Tech to exist as part of a larger, intersectional movement for social justice. I’m not convinced that potential is realized yet, but it’s getting there.

Many keynotes also firmly drove home the “resistance” summit theme, and more importantly, drove it home in a way that offered the audience actions and takeaways beyond the summit weekend. In particular, Debra Cleaver’s “For the Love of God, Please Stop Ignoring Elections” gave tangible numbers on elections at every level of government, why the progressive movement is losing, and what we can do about it. In a similar vein, Del Harvey, (VP at Twitter), spoke about Cybersecurity and protecting our data, while Jamie Chung (Software Engineer at Dropbox) reminded us to take care of ourselves and each other to help prevent burnout. All of these talks gave me things that I could go home and do that would help the resistance, and in a time when it’s too easy to feel powerless, that really means something. 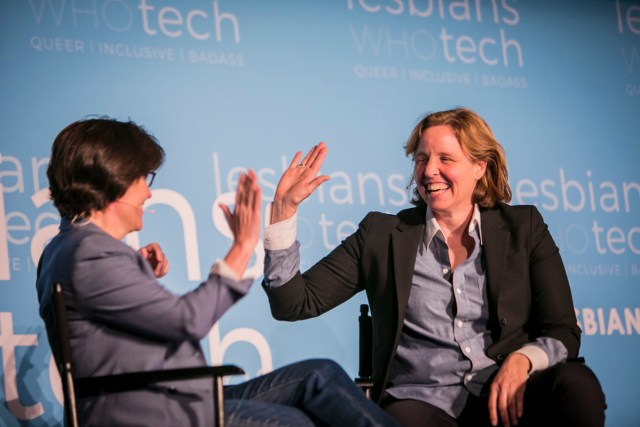 I was generally impressed with the range of content presented, including panels from the Prop 8 plaintiffs, a screening and discussion of Her Story with Angelica Ross and Jen Richards, and a talk on the future of Planned Parenthood. However, headliners and notable tech power lesbians Megan Smith and Kara Swisher have just been on stage at Lesbians Who Tech so many times before, and the talk didn’t feel as inspiring or fresh as many of the other keynotes. I would be excited next year to see the conference go one step further and lift up more and newer voices on the big stage, in particular more trans folks; as far as I am aware no trans women gave keynote speeches (except as panel members) this year, and to create a space that elevates and celebrates trans women, this is a necessary next step. Nonetheless, on the whole, the keynotes for me were the most memorable part of the weekend.

Eli: In between keynotes, there were breakout sessions organized loosely around certain themes (ie “Entrepreneurship, Education + Career Growth” or “Cybersecurity, Cloud + Data”), usually in panel format. Like the keynotes, there was an enormous range of topics and speakers (including Autostraddle’s own Alex Vega!), and I was sad to only be attend one at a time, when there were five or six going in parallel.

Friday morning, I attended the sessions themed around “Hardware, Machine Learning + AI”, hoping to hear some interesting technical content. Unfortunately, the venue was absolutely packed, and when I eventually got in, I found it difficult to see and hear the speakers. The talks were interesting, and inspirational from the perspective of “here is a queer woman engineer talking about her work” and the importance of this visibility cannot be overstated. However, I would have loved to hear some really technical content that goes beyond “here is this person who does this cool job in tech” to “here is this person explaining a really deep technical problem in their job and how they solved it” and this person happens to be queer/trans/non-binary/etc etc. Another attendee agreed that they “wanted more technical talks…more hands on workshops to learn new skills, less inspirational talks.”

Thankfully, I had better luck with the panels held in the main theater (plenty of space!). The idea pitches were spectacular (reimagined breast pumps, public bus availability, getting queer people into medical studies, and a repository of government regulations were just some of the issues the contestants proposed solving), and the Coding Bootcamp Showcase offered practical advice for folks considering bootcamps to learn to code. On the whole, I learned about a random and wide range of topics, sometimes with only a loose connection to technology. On one hand, Lesbians who Tech provided an opportunity to hear ideas that I might not otherwise have exposure to, but on the other, I found little content that would help me learn and grow in my career as a engineer. 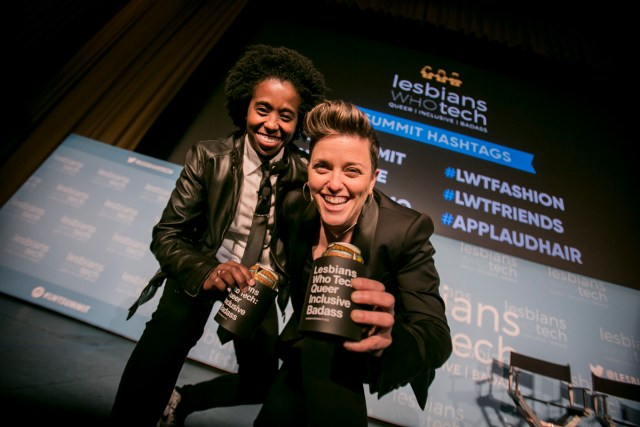 Cee: For me, socializing, networking and generally meeting other queers in tech is the main draw for attending a conference like this. There are so few of us, and it’s great to have so much in common with someone. I chatted with several friends during the weekend and everyone agreed that we’d all love more time for socializing and networking. The programming seems very rushed and there’s no downtime between panels, and so many people in attendance with very few opportunities to meet people if you’re shy or overwhelmed by the size. Maybe something like breakout sessions, or networking sessions, or facilitated discussion groups, and more general meet-ups would be great. I want to get to know new people, and find others to work with on projects. One friend said, “I’d like to see more facilitated discussion. Everyone in attendance has a lot to offer, and I’d like to hear more of that. Some of the talks spawned conversations. We have all this brain power in a room, let’s break out into groups and talk through stuff.”

Cee: LWT is held at the Castro Theatre—a beautiful historic landmark building, right in the heart of the gay district in San Francisco. The main stage is held there, and the breakout sessions are held at bars and venues all within a block or two of the theatre. I understand why it makes sense to have LWT in the Castro—it’s nice to be in the gay neighborhood and to support gay owned businesses. However, I think the summit has outgrown the theatre, as there were some major accessibility issues, and often the venues for the  smaller sessions were overpacked and at capacity and we were unable to attend. Also holding events at bars might not be ideal for sober folks.

LWT has had some issues in the past with inclusivity and intersectionality, but it feels they’ve grown and are working on getting better.

We spoke to a couple trans women friends and they both feel it’s gotten better, but it still needs a little work. One friend who has been to several summits said, “I still feel like the number of trans women who attend is small, but haven’t felt tokenized in general. I didn’t run into any instances of exclusion or microaggressions this year, and generally felt like I was cool to be there. I’d love to see more trans women on the main stage, talking about technical stuff, and not always about our trans experiences. I’d also love a trans social or some kinda trans-lady led event.”

Cee: I felt like the language regarding trans folks kinda missed the mark. I think they are trying MUCH harder than the first LWT, but it’s not quite there yet. As a NB/GQ person I also cringe when being addressed in a room as “ladies.” Another GQ friend said they did feel included, and “as someone who uses gender neutral pronouns, this year was much better than last year. Lots of public shout outs to respect pronouns. Next year, let’s have everyone’s pronouns nicely legible on the nametags. I think LWT is doing much better with being more queer inclusive with the rebranding and the new tagline.”

Eli: I feel that some of the speakers still needed some trans 101 or trans 102 training. It’s hard when you go into a space expecting it to be really great on these issues, and then still hear “Ladies and Gentlemen!”; it doesn’t give me pause at other types of events but LWT can do better. The first conference they didn’t have any pronouns on nametags or really any trans awareness, so I do want to note how far they’ve come and the fact that they do seem to be trying and open to feedback.

Cee: On the first page of the agenda pamphlet it says “We are committed to making this event accessible to people with disabilities… All presentation venues have ADA-compliant wheelchair accessible entrances and restrooms.” That’s great, and a good step, however, the venues were unfortunately not totally accessible for folks with limited mobility. The historic Castro Theater does not have an elevator, so the upstairs space was not available for everyone. And the language of some of the talks could have been a lot better. “Stand if you’re able if you’ve experienced x” is way better than “Stand if you’ve experienced x,” as it alienates those who can’t.

Overall we feel that LWT has improved dramatically since the last time we went four years ago. The variety of programming is interesting and there’s a ton of content. If you’re interested in being in a queer tech normative space, give it a try next year, or check out one of the local LWT meet-ups or events in your city, or start one yourself if there isn’t one yet. 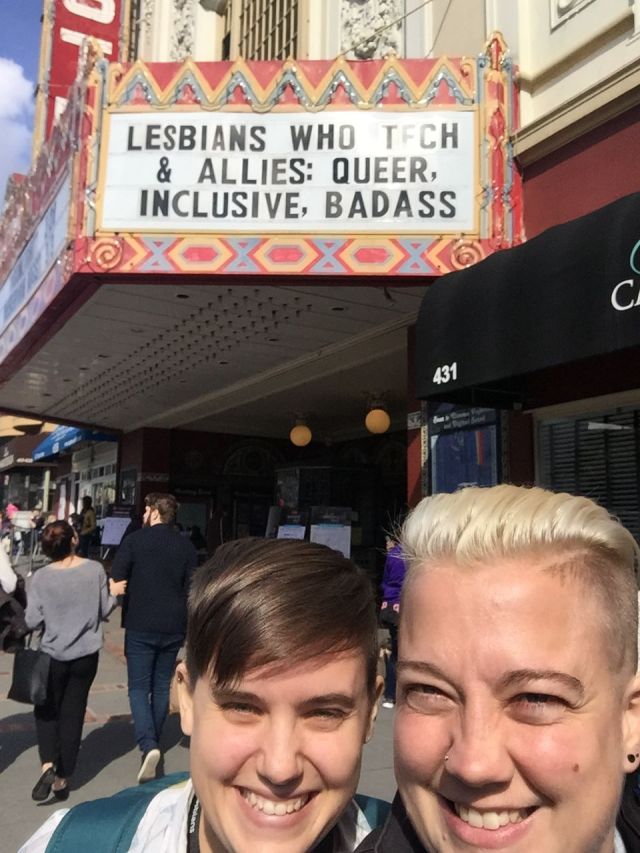 I'm the former tech director for Autostraddle, which meant I oversaw all the tech-related stuff and did anything from coding the website to keeping the servers online.

I really enjoy making things, taking pictures, getting outside, cooking food, working on my house and garden, and travel.

Cee has written 18 articles for us.