Welcome to the live-blog of one of the most important Canadian elections in recent memory. This one is super exciting, no one is really sure what’s going to happen, but I’ll be watching CBC and updating as we go. You need 155 seats for a majority government, which the Conservatives might get. Yikes!

Watch the updates as they happen on CBC. Have feelings? Share them!

four of five leaders of the major parties 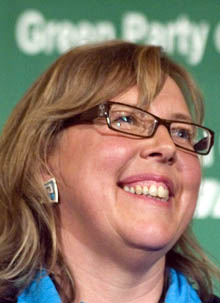 11:51PM: Gilles Duceppe just resigned as leader of the Bloc Quebecois! He didn’t win in his riding and the Bloc has been reduced to 2 seats overall. 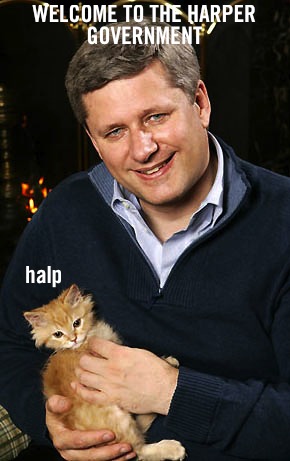 11:36PM: The Liberal candidate in my riding has been the MP there for 18 years, and tonight he was replaced by the NDP candidate. It looks like things like this are happen across the country. Change is happening whether we like it or not!

11:30PM: THE ONLY WAY I WILL FEEL EVEN A LITTLE BIT BETTER ABOUT THIS IS IF ELIZABETH MAY WINS HER SEAT. THAT IS ALL.

11:23PM: My dad keeps thinking Ignatieff is going to announce his resignation, but he just said he’ll continue to serve as long as the Liberals want him to be leader, so.

11:21PM: It’s like a funeral up in this Liberal Party room thing. Because the Liberals are dead. And so is the Bloc. You guys I feel really sad.

11:14PM: Ignatieff is speaking! He looks sombre. Probably because he didn’t even win in his riding. I feel sad for him. AND FOR THIS COUNTRY, DEAR GOD

11:05PM: I feel like we have gone backwards. From the Globe and Mail: 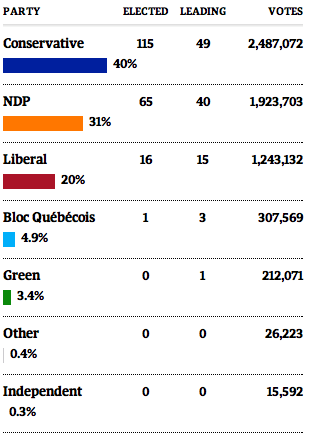 My parents think that because the NDP won so many seats, they allowed the Conservatives to win a majority. I think the Liberals just sucked so hard in this campaign. Thoughts?

10:57PM: Liberal leader Michael Ignatieff is losing in his own riding. The Conservatives have a projected 167 seats, idek, what even.

10:52PM: Elizabeth May is winning in her riding! Maybe the Green Party will get a seat in Parliament for the first time.

Also with the results coming in, it’s clear that the country is divided between socialist NDPers and Conservatives, two far ends of the spectrum. Feels like the United States.

10:45PM: The Liberals are at a historic low. So much for “Canada’s Natural Governing Party” eh?

10:41PM: The Conservatives have confirmed 111 seats, leading with 51. But it’s a probable majority, children. 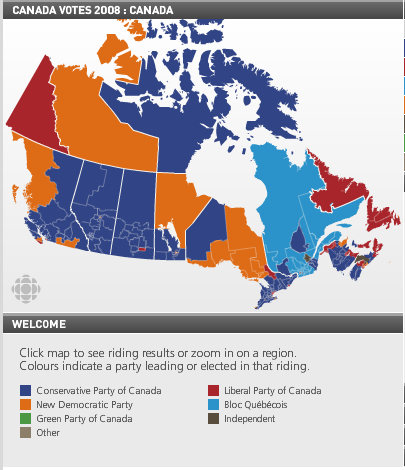 This is where we’re at right now: 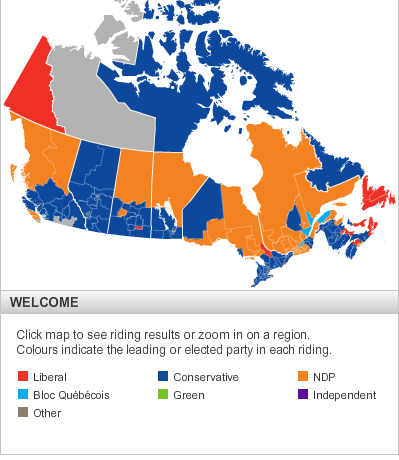 As you can see, the Liberals are sucking, as is the Bloc. The Conservatives continue their douchbaggery, and Jack Layton managed to rally a nation. Or something.

10:29PM: The NDP is at 104 seats. I feel like this is a record for them and that makes me super happy, if only the Conservatives would disappear. They are stuck at 150 seats.

10:22PM: Is there anyone in Quebec who has feelings about the Bloc being stuck at only 4 seats?!? The NDP has completely taken over. 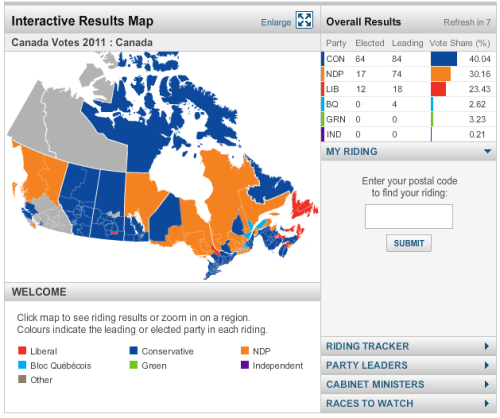 10:17PM: Apparently an NDP candidate who was on vacation the whole time is winning in her riding.

10:15PM: The Conservatives need another 14 seats to win a majority. The polls only closed 14 minutes ago. I don’t know what this means. I feel like the numbers might change? Hoping?

9:57PM: “Breaking News: Conservatives win”
my dad: Breaking news? They haven’t even closed the polls in BC yet! 6/100 polls and they’re already saying the Conservatives won!

9:49PM: They’ve already started releasing the results, with the Conservatives in the lead and the NDP and the Liberals sort of tied for second.