“Butches and their fucking body issues,” she said.

It was too dark for me to see her face, but I know she was rolling her eyes. She was angry because I didn’t want her to touch me. I had many reasons for that, but this was the reason she found easiest to express. My stomach turned because no matter how much it hurt to hear it, there was an aching sliver of truth in that blanket statement.

I’m a stone top. If you want to get under my surface, prepare for the long haul. I am not the kind of fruit that peels easier in hot water. I am the flower that only blooms once every few years, and only under the full moon during a downpour.

Butches and our “fucking body issues,” yes. I wish I had a dime for every question I’d been asked on behalf of the other butch dykes out there. I wish I had a dollar for all the invasive ones, because I’d be writing this article from a yacht. Why do some of us bind? Do we not like our womanhood, are we rejecting our femaleness? Why don’t we just identify trans*, or if we do identify as trans*, why do we still identify as butch? Why do we dress in mens’ clothing? Why do we look like 14 year old boys? Why are most butches tops? Why don’t we like to be touched? What’s wrong with us? 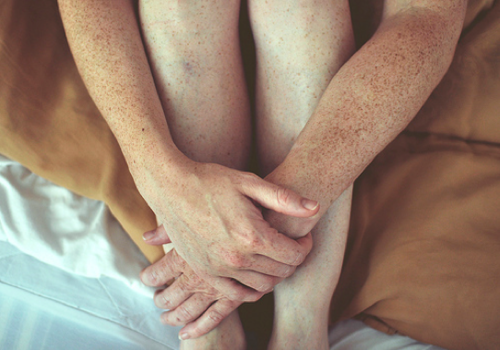 I wish I could say that the way in which our bodies exist, or are offered up to each other, to the masses, to whoever needs to approve or disapprove of them in order for us to go on existing, was not just a little bit harder. But it is just a little bit harder, and I’ve fielded a lot of questions about my body lately. These questions were typically asked by people who’d had a little too much to drink, or people who think that my presentation begs to be justified. They wait until I’ve talked a little bit about myself. Maybe I’ve used the term “butch” to describe myself, or maybe I’ve just talked about dressing this way, acting this way, tried to make a joke about my masculinity complex. Maybe I’ve name-dropped some of the actresses I’m in love with and then laughed about how I have such a type*. Whatever I’ve said, it’s led to this. They feel that whatever information I’ve offered means they have the right to question me. It reminds me of people who justify violence against queers because of our flamboyance. If we put ourselves out there, if we’re always “making a big deal about it”, what do we expect?

My inner response to these questions comes from a deep and dirty recess in my gut: Where the fuck do you get off? Sometimes it feels like a requirement for queerness is an incredible well of strength to put up with the people who ask you invasive questions about your sex life that would never be presented to the straight couple at the other end of the bar. Besides, when will people learn that you can’t assume a single thing about someone’s bedroom preferences based on the way they wear their slacks, cut their hair, or identify on the gender spectrum? You can’t even make assumptions based on labels, because “top” doesn’t just mean a sex position and “bottom” doesn’t indicate submission. And labels are as fluid as sexuality, entirely up to personal preference, and stand for something different on every body that bears them. Put power in your words, yes, but don’t swear by them as if they are static pillars that will always be there, always meaning the same thing.

“Stone butch” is a term with many connotations just as thick and craggy as their namesake. I sometimes find myself moving away from the label because those connotations can be so firm and unflinching, and because the history of the term is complicated, as social as it is sexual; strange how something can be so aptly named, since my main issue with the identity is that every time I try to fit it to myself, it’s all rough edges. I like to think of my gender as slippery, but sometimes it’s very sticky, and when it sticks it translates to a butch who doesn’t really like to be touched. Stone butch is the best way I know to describe that.

I came to this identity organically, and like all other identities I use in my life, through a bit of stumbling and derailment. I did not enter my sexuality one hundred percent certain of the label. I was not always “this way” nor did I wear it comfortably and confidently from the first. On the contrary, I didn’t think that I was allowed to take on the label. The fact that I did not really enjoy most touching in bed made me come up with a lot of excuses. I thought it was something I would “grow out of” eventually, like a pair of shoes or the habit of biting my nails. My shoe size hasn’t changed since I was 12 and I consider my nail-biting to be a “natural lesbian instinct”.

Some partners have respected my wishes, some haven’t. When you’re a stone top and a butch, you’re a stereotype, a punchline. Some of my partners have seen my stone nature as something that they need to “fix.” They want to be the Reagan to my body’s Berlin Wall, but alas my stoneness is not something waiting to be torn down, and the other side of that wall is not a bleak state in need of upkeep. It is not progress to get me out of my clothes. There’s a reason I keep most of those clothes on, and I promise it’s not going to ruin the moment. I actually gave myself a stick and poke tattoo on my mons pubis as a way of stopping people from undressing me. I don’t tell people it’s there until I feel that we are in a place where maybe, just maybe, they’ll have the opportunity to see it. 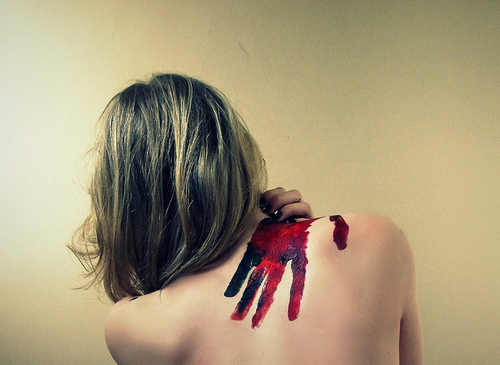 When I explain that I’m a stone top, I know from the reactions, even from the things that are said outright, that it’s assumed this comes as a result of trauma, abuse, or another dark place. It’s assumed that I am what I am because of what happened to me. I wrestle constantly with this narrative. The nagging discomfort of physical contact, the specific way in which I derive pleasure, the way that interrupts or contrasts with the way my partners understood intercourse: So many times, I interpreted these as symptoms of a problem. Something, I determined, must be wrong with me. But there wasn’t, and there isn’t, and no matter what you call yourself and what you do with you and yours, please remember: there’s nothing wrong with you. If you’re practicing safety and consent, then there’s no room for shame or guilt in your love life. It might try to budge its way in, but kick it out your bedroom door and lock it out.

Stone tops of the world, let’s all take a moment to acknowledge that there is nothing wrong with us because of the way we fuck. I know that’s difficult to internalize, trust me. Touching is human. I’ve been told that time and time again, that humans want to touch and be touched, that it’s natural to want closeness and that desire means wanting to become one with another body. I wish I could tell you how many people I’d felt I’d disappointed when they’d looked up at me and said “No, I want to make you feel good,” and I’d been at a loss to describe how everything I felt came from how they felt, how my climax is extremely cerebral, my desire concentrated in so much more than my clit. I get my sexual satisfaction from knowing how well I’ve satisfied my partner. I get off on getting my partner off. I do, I swear! I promise I am not making this up, saying it to make you feel better. I’d like to think that tops are magical creatures, that something about the insane amount of pleasure we get just from giving pleasures to others endows us with certain supernatural powers, like changing shapes at midnight, or granting wishes. It would be nice to grant wishes, even if my wish is for less people to ask me stupid questions in public.

Sometimes I’m overcome by a deep guilt for the way I like to fuck. I want to take all of my partners and unite them in a circle, have them hold hands with me while apologies pour out of me like tears. I’m sorry I don’t like to take my clothes off, I’ll say, and I’m sorry that I don’t want you to touch me there. It’s not you, it’s me. The boundaries I have to put up don’t mean that I’m not letting you in. They don’t stand for your failure or my distrust. They’re an invitation to a new narrative, a new way of thinking about sex. I discovered my desire and my ability to communicate that desire to others on my own very queer path, and I wouldn’t change one thing about that. It was beautiful and imperfect and fucking incredible to discover someone else’s body in that way, with no expectations, with very little guidance, with nothing but skin exploring skin. I think there’s a way in which queer sex can subvert and transcend so many things because it is this wonderful free space, and when that translates to actual pleasure… oh, glory be.

* If you ask, I will tell you my type based on all the celebrities I am in love with, yes. You might laugh, though. It is almost too perfect.