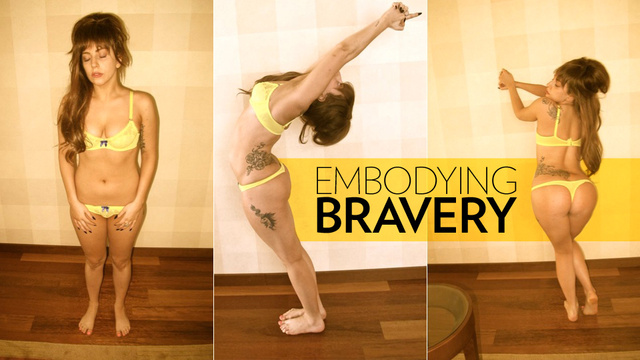 Today on her social networking site, LittleMonsters.com, Lady Gaga posted a picture of herself, eyes closed, wearing just a bra and panties. The caption: “Bulimia and anorexia since I was 15.” It is a very public, very personal response to the attacks on her weight. She is, quite literally, exposing herself, inside and out.

Last week, a smattering of very misleading photographs were published by various outlets; the singer looked significantly wider, chubbier, fleshier than she has in the past. She was called “meaty” and and the “news” was that she had “piled on the pounds.” As some have noted, the photographs did not reflect her real, true shape — whether they were stretched in Photoshop or flattened and distorted by a long lens is unclear. But video from the same show demonstrates that this woman is by no means fat — though she has admitted to gaining around 25 lbs. recently.

The headlines must have touched a sore spot for the recovering bulimic, however. As one would imagine. And so, today she launched a sub-section of her site, called Body Revolution. She posted a series of half–naked images, and alonside, Gaga wrote:

But today I join the BODY REVOLUTION. To Inspire Bravery. and BREED some m$therf*cking COMPASSION

On the Body Revolution page, the copy reads:

My mother and I created the BORN THIS WAY FOUNDATION for one reason: “to inspire bravery.” This profile is an extension of that dream. Be brave and celebrate with us your “perceived flaws,” as society tells us. May we make our flaws famous, and thus redefine the heinous.

She also wrote: “Hey Guys its Gaga… Now that the body revolution has begun, be brave and post a photo of you that celebrates your triumph over insecurities.”

The page has only been live for a few hours, but fans have already been posting stories and photographs about recovering from anorexia, living with one and a half legs, having cancer. There’s even a photo of Gaga’s father’s belly. (“he’s proud but has lost ten lbs and is working out too feel better, be healthy.)

I can’t stop crying. Gaga i’m battling the same thing right now; you met me in Sydnney the first thing you said to me was ” Oh my God you’re so skinny” And from then on i’ve been trying to recover so much but it’s been killing me, i’ve been relapsing a lot lately and all i do iscry about my body and i feel like i wish i never did recover but this. looking at this is making me strong. You inspire me. If you can be strong, i can too. Thankyou for helping me. TYhankyou for everything.

Gaga has always claimed to be all about her fans, and by involving them in this, she makes a very important point: She’s just like them. Some other celebrity might sue a publication for calling her fat; Gaga’s fighting back by taking the high road, by showing the world that it’s not okay to critique her body — not because she’s a pop star, but because she is a human being, with feelings and a history of eating disorders and we can, and should, do better. By posting these homemade, raw, here-I-am-with-all-my-flaws (not that we see any) images, she shows that her struggle is the same struggle millions of other men and women have everyday: Learning to love yourself just the way you are, finding and believing you are beautiful when the media is hellbent on making you think you’re fat and ugly (and that fat is the same as ugly).

Some may dimiss this as a stunt. I’ve seen Facebook posts calling the weight gain an orchestrated move, for attention. But it’s sick and cynical to think that this 26-year-old woman who performs her heart out, leaves it all on the stage, day after day, with an eating disordered past, would be playing games with something as serious as body image. Especially with a legion of young fans.

With the Body Revolution, Gaga may be orchestrating and using her body to send a message, but one of tolerance and acceptance. It’s awful this started with ugliness, that Gaga became the target of weight hate. But if an influential pop star with millions of followers can make compassion cool and make fat-shamers feel shame, it just might be worth it.