Once again, our favorite and most reliable news publication, The Daily Mail, has released a desperately important story regarding the romantic activities of a female celebrity. In this case, the lady in question is Our Lady Of The Moment, Ellen Page. Page was spotted in New York City yesterday holding hands with a “mystery blonde.” If you want to see the photos you should go to The Daily Mail because we just got in trouble for posting them here. Which is too bad because our captions were funnier than theirs. (ETA: you can also see the pictures here if you would like to avoid supporting The Daily Fail.)

“Ellen Page got affectionate in Manhattan’s Nolita neighbourhood Sunday with her first girlfriend since making the milestone,” writes The Daily Mail. “The 27-year-old Oscar nominee wrapped her arms around the taller mystery blonde, who was equally handsy with her.” Regarding whether or not these embraces were truly reflective of an actual relationship, Lesbian Affection Expert Laneia Nicole told me via skype chat, “i don’t think you walk like this w/ people who are not your gf.”

Activities participated in by the happy maybe-couple included lunch at Cafe Habana, visiting McNally Jackson Books, and shopping at Whole Foods. “lunch, bookstore, whole foods?” skype-chatted Whole Foods Expert Laneia Nicole. “this is like lesbian 101 here. but I think this reporter is mistaken, in that it was probs brunch and not lunch.”

This past week has been filled with quite a few momentous occasions for Ellen Page. Last week, she told Seth Meyers that she, like so many other young lezzers, has a big fat lesbian crush on Rachel Maddow.

She also participated in a truly excellent interview and photoshoot with The Hollywood Reporter, in which she discussed the coming out process, her struggles with depression, and her working relationship with her manager, 47-year-old power lesbian Kelly Bush, and also basically her entire life. 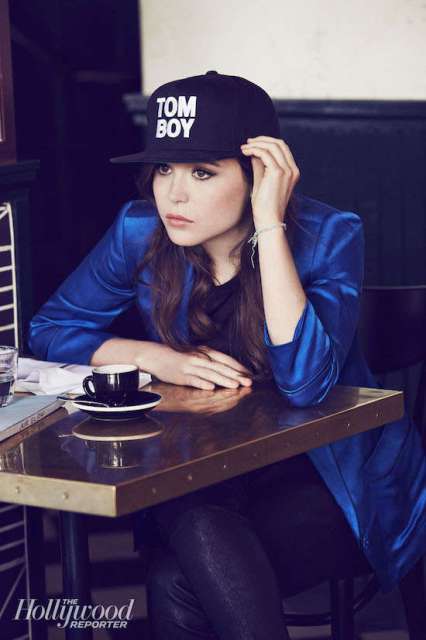 She also appeared on The Colbert Report last week, where she bravely came out as a Canadian.

Furthermore, Ellen Page attended the New York City premiere of X-Men: Days Of Future Past, which has the word “men” in the title, but also the word “future,” so I might go see it. Ellen Page plays Kitty Pryde, a name which is just about as gay as it gets. Here she is with Hugh Jackman, who plays Wolverine (I know that because I’ve seen most of the X-Men movies and was just kidding about only maybe seeing it): 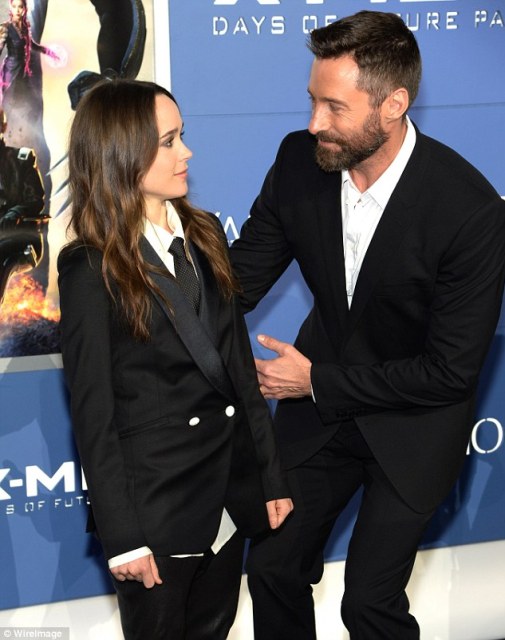 Can I pick you up? Just a little bit? I promise it won’t be weird! YOU’RE JUST SO TINY!

In other news, Ellen Page has not yet responded to Sissy Spacek Scholar Laneia Watson’s request to co-author a Sissy Spacek fanzine.