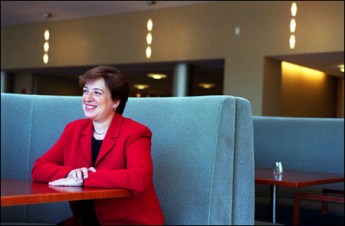 BREAKING: Obama is going to nominate Elena Kagan for the position of Supreme Court Justice of the United States. The story broke at NBC at approximately 10:35 PM EST. If confirmed, she will be the fourth female justice, and the first potential semi-closeted lesbian. She is the only frontrunner among the nominees who has not previously served as a judge, but she was Dean of Harvard Law for six years. While her politics are generally considered liberal, some liberals say she comes down closer to the conservative side on issues of executive power and treatment of military detainees. She did anger conservatives, however, when she argued to turn away military recruiters from college campuses because of the military’s discriminatory DADT policy. (@msnbc)

Elena Kagan was apparently in the running for a SCOTUS position last year, but Sonia Sotomayor was nominated instead. The two women have a certain amount in common, and Sotomayor’s reception by the right wing and the American public is like a preview of how this confirmation process will likely turn out. Sotomayor was reviled by conservatives and criticized for a perceived inability to remain “neutral” as a Supreme Court Justice because of her Latina identity (because, of course, the only background that allows you to be “neutral” on important issues is that of a straight white man).

It’s likely that a similar controversy will arise here, especially with the appeal of the Proposition 8 ruling on the horizon. Prop 8 — and therefore to a certain extent the ability of the government to deny us equal rights — is going to go on trial in the Supreme Court, and the big question is whether a (possible) lesbian might be sitting on the bench when that happens. Judge Walker, the original California judge of the recent Prop 8 trial, is himself gay; it’s a peculiar and bittersweet moment in American history when the country still has the opportunity to rule on whether or not our familes are valid, but at least two of the people vested with the power to make that decision are (maybe!) gay.

It’s also worth wondering what this move says about Obama — he hasn’t repealed DADT, but he’s nominating a (possibly gay) woman who has adamantly opposed it for years. It’s unlikely that Kagan herself will have the opportunity to take any action against DADT, but it says something about Obama’s commitment that he’s chosen someone with such a strong history of supporting the GLBT community as his Supreme Court Justice legacy.

There are a lot of ways a President can impact the country in the long term, and choosing Supreme Court Justices is a really important one. If Kagan manages to get confirmed, she’ll be on the bench ruling on every piece of legislation that might possibly affect gay families for the rest of her life, even if Sarah Palin is our next president. This is a really admirable decision on Obama’s part, and I suspect it’s about to be a really un-admirable time for the right wing and religious conservatives of this country. Let the name-calling begin!