If you’ve never listened to any sort of electronic music, Morgan Page is a great place to start.

First off, he’s done some really great music with Tegan & Sara. Many know the song “Body Work”, but there is also the lesser-known (but in my opinion, superior) Video.

Give it a listen and let’s get warmed up. I mean, it’s been one paragraph and I’ve already brought up Tegan & Sara so really, I shouldn’t have to write anymore than that, amirite? 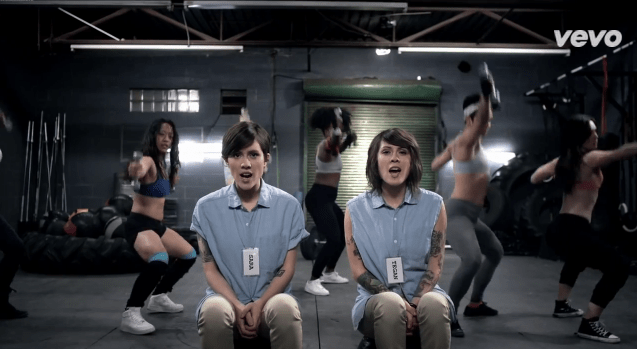 Look how excited Sara is about squats!

BUT I TREK ON.

From the get-go, Morgan Page has a very recognizable style within a genre that is very easy to get lost in. He has a great command of melody, chord progression, and timbre of vocals mixed with instrumentation that focuses on that raspy, soul-aching, unrequited-love-for-my-lover-who-doesn’t-know-it kind of voice. One of the reasons why I love electronic music is because rather than being about the producer, the music doesn’t really come to life without the featured artist. Very often, Morgan Page  works with artists like Lissie, Camila Grey, Tegan & Sara, Nadia Ali, and Angela McCluskey (of Télépopmusik) who all give his music a certain depth that is often lost amidst all the uhntiss uhntiss. Like one of his more recent songs, “In the Air.”

I really LOVE this song. A great example of Morgan Page’s typical use of voice, I think it has a really different sound from what’s out there now and shows an artist expanding on what he knows what he’s good at. Synth strings, big percussive sounds, and for the music nerds out there, this song has some great suspensions that just seem to really just stretch your heartstrings. When the beat drops, it’s so organic and natural it’s from Whole Foods and provides a nice driving pulse for the rest of the song.

Also, his lyrics. I am personally someone who does not really pay attention to lyrics either way as long as they get the point across (“YOU WANT A MASERATI? YOU BETTA WORK BITCH”). But I know a lot of my friends appreciate a good, meaningful, emotive, and poignant set of words every now and then. Page does a great job of setting some lyrics that hit you right in the feels to some music that propels you forward while still . I feel like the song “Addicted” does a really great job of conveying my relationship with Diet Coke.

Morgan Page has been one of my favorite artists for some time now. His music often reminds me of warmth and enveloping, and for that reason, we’re going to go with my twist on a “Café Royal.”

“Fight For You” – feat. Lissie – A strong, driving anthem, this song had a big part in my own sexual awakening as a queer woman and the video has Lissie in a tiny little dress-hoodie doing sporty things. Things I’m not mad about.

“The Longest Road” – feat. deadmau5 and Lissie – (This one won a Grammy!) This is the first song that I listened by Morgan Page. The intro is a bit long, but if you can make it through, it’s one of my favorite hits.

For Spotify users, here’s an ongoing playlist that compiles all the listed tracks of this column into one playlist:

Join A+
Related:alcoholbpmtegan and sara