Winter TV is on its midseason hiatus but that doesn’t mean Veronica Lodge didn’t look Betty Cooper right in the face while she was sipping on a strawberry milkshake this week and say the words, “To recap, you’ve been talking to a serial killer on the reg and he’s been puppet-mastering you?” Also Sara Ramirez made her debut on Madam Secretary, Mey wrote about where Transparent should go from here, Supergirl had waaaaay too much Mon-El, the Runaways landed on Hulu, and Natalie wrote a beautiful piece on Tessa and Mariah’s storyline on The Young and the Restless. Here’s what else!

The final two episodes of The Shannara Chronicles aired this week, and they were intense. The Warlock Lord is coming to town and he needs both Eretria and Lyria to carry out his evil plan; Eretria to possess and take over her inner darkness and Lyria to open the door to Heaven’s Well.

Eretria and Lyria are taking a quick break before the final battle, and Lyria tries to say they’re meant to be together but Eretria is still feeling from being invaded by the darkness and wants to be the master of her own fate. So Lyria makes it so; she says “people like us” deserve to have happy endings, and asks Eretria to be her queen. 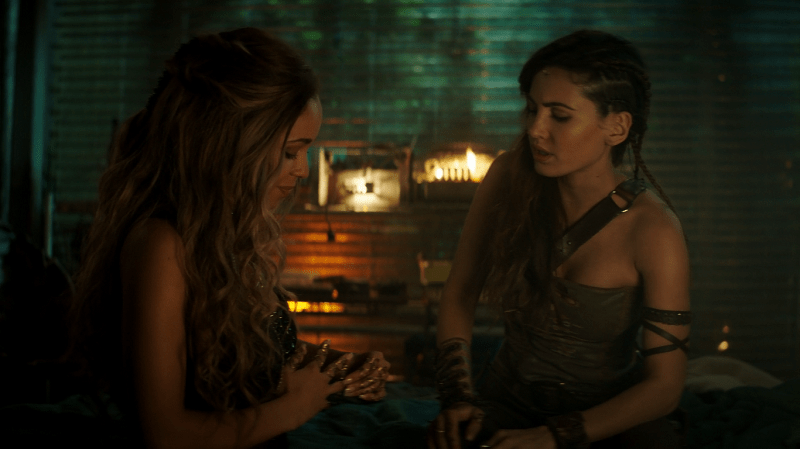 “I know I have 22 rings on but I swear this one is special.”

But the darkness takes over Eretria’s body before she can answer. It’s frustrating her, not being able to control this, and less and less so as the Warlock Lord grows near, but she’s a fierce and determined little rover and she’s not about to give up just yet.

Unfortunately she loses that fight at an inconvenient time, aka when she’s locked in a shipping container with Wil and Lyria. 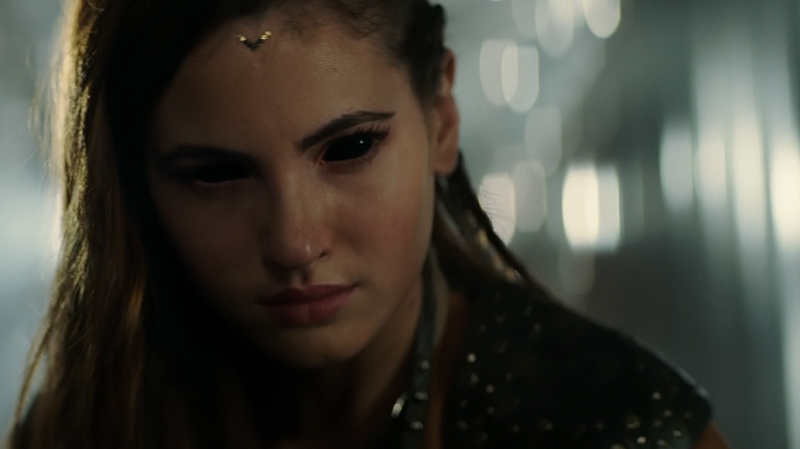 “Black eyes are all the rage in Purgatory.”

She starts attacking them, only becoming Eretria again momentarily while looking into Lyria’s pleading eyes. While Eretria is lucid, she tries to get Lyria to run, but Lyria won’t leave her. 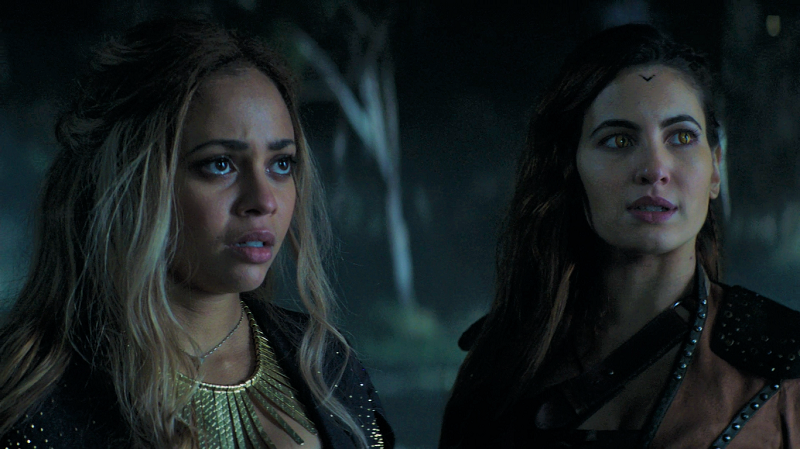 The Warlock Lord sends Eretria to open a dam so he can poison all the water in the Four Lands and then uses Lyria to open Heaven’s Well then knocks her out, leaving me to be stressed about her survival rate until Wil and Mareth show up to wake her up and send her back to the kingdom.

Lyria doesn’t get there in time to save Eretria with a kiss like I’d hoped, but Eretria got un-possessed anyway. Wil and Mareth killed the Warlock Lord and de-poisoned the water and all was well. Lyria goes to the kingdom. takes her rightful place as queen and addresses her people, being sure to look Eretria in the eye when she says that, “Love conquers all.” 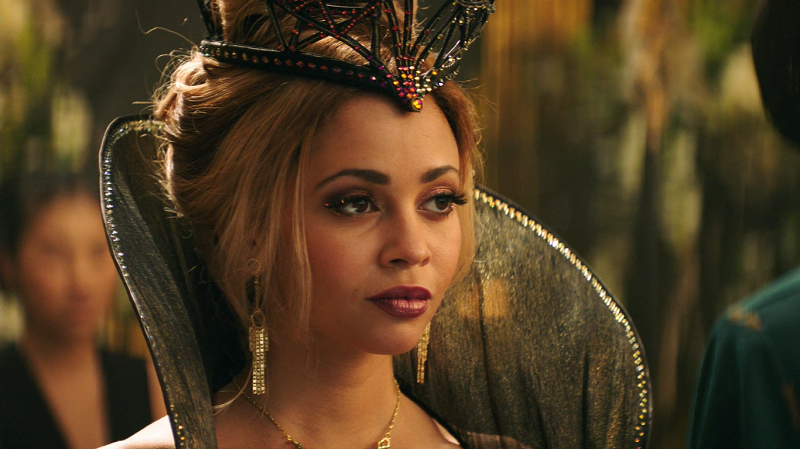 The Queer Queen we deserve

Afterwards, Eretria catches up with Lyria in the hallway and Lyria didn’t ask to be a leader but she’s ready to take the responsibility seriously. But there’s a hint of sadness in her eyes; because she will have to rule alone. Eretria can’t be with her yet (yet!) because she has to explore this darkness situation and get control of it. She never wants to hurt Lyria again. So Lyria smiles and says that she can go off and do what she needs to do, as long as she comes back to her. They kiss goodbye in shiny slow-motion. 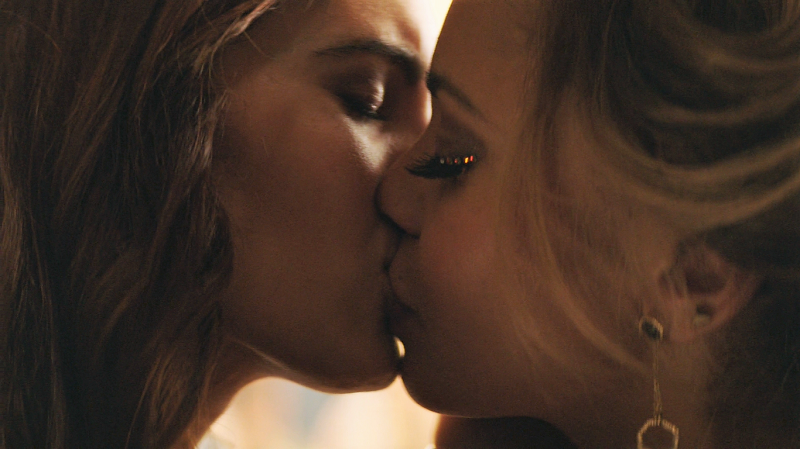 They say if you love someone, set them free…

And with that we also kiss this duo goodbye. The fate of this show is up in the air, as the switch from MTV to Spike hasn’t been the smoothest transition, but the internet hasn’t given up on it yet. We can only hope we’ll see our bisexual rover and her queen again someday. 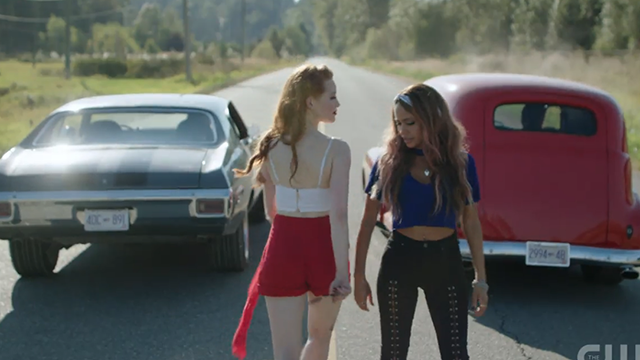 Jingle your jangle, it’s time to talk about Riverdale. Specifically it’s time to talk about the fact that Toni Topaz has now officially come out as bisexual —”I like girls more,” is a thing she said after she went to third base with Jughead — and has officially shared a #SignificantLook with Cheryl Blossom. I’ll get into the plot of this glorious show in the coming weeks as that situation likely develops. In the meantime what I want to say to you is that Riverdale is like if Twin Peaks and Gossip Girl had a baby who was raised by its lesbian aunt in Vancouver in a house filled with porcelain dolls. People want to compare it to Pretty Little Liars but that is completely unjust because: 1) The show calls rape rape, like says the word “rape” right out loud. 2) The last motherfucker who tried to rape someone got the fucking hell beaten out of him by five women. 3) Riverdale knows Archie is the most boring character on earth so they keep giving him less and less to do.

It’s one part murder-mystery, one part teen angst drama, one part the best dialogue anyone has ever written for TV, one part stylized comic book blocking, and one part Alice Cooper raining down perfection.

I will close today’s introduction to Riverdale with a gift specifically for our beloved Stef Schwartz. 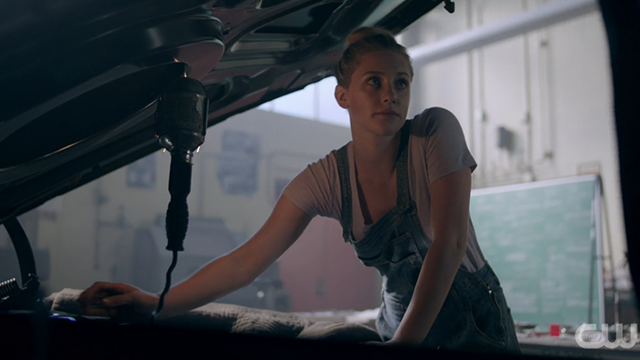 Catch up, the bisexuality cometh!