If you spend most of your life with your eyeballs glued to GayBC Family like I do, you probably feel like summer is coming to a close. Why, this very night the Pretty Little Liars are going to prom! They’re going to graduate! And next week, the Big A Reveal. (No, for real this time.) (FOR REAL.) As ABC Family winds down, though, some summer TV shows are just gearing up!

Here’s the full trailer for Faking It‘s second season, which returns on August 31. Paige McCullers is definitely naked in this trailer, so.

Here’s the full trailer for the second season of Survivor’s Remorse. It’s back in all it’s M-Chuck glory on August 22nd.

This week’s queer TV roundup is a little more brief (and late) than usual. There was no new episode of The Fosters, and I’m working on a kitten-saving project that took up my whole weekend. We’ll be back to normal next Monday. 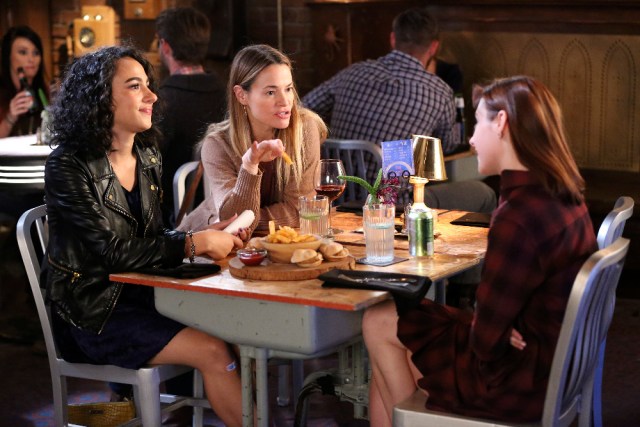 At long last, Alice Pieszecki arrived on Chasing Life, as Brenna’s new girlfriend’s ex-girlfriend. “Wait,” I hear you saying, “a high school senior is dating someone old enough to date Alice Pieszecki?” Ah, yes. And that is the rub. See, Margo is Brenna’s fresh-from-college film club sponsor, but now that Brenna has changed schools, they’re in the clear to see each other romantically. Brenna is a mature 17, and she’s feeling it — until she meets Alice Pieszecki, who crashes her date with Margo, wine in hand, even though Margo told Brenna she’s an alcoholic. So Margo has to abandon their date to take Alice Pieszecki home.

On their next date, Brenna discovers that Margo took Alice Pieszecki home to her home, because they still live together and share a dog. Brenna’s probably too young to have ever even seen The L Word, if we’re being honest, and this amount of drama is both surprising and unnerving to her, so she bounces up out of there without even looking back over her shoulder.

At her new school, she meets a guy with cancer. I’ll bet six hundred million dollars he is the person she anonymously gave her bone marrow to and they’re gonna fall in love like John Greene wrote it. 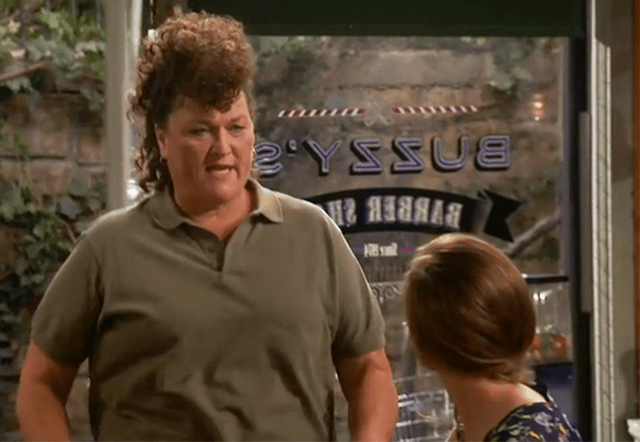 I’m looking for a girl named Quinn Fabray. She said she was going to Yale and hasn’t been heard from since.

Coach Beiste arrived on Clipped this week, playing Mo’s mom, Dottie. (Get it? ‘Cause her name is Dot Marie Jones, IRL.) (Dot Marie Jones is an angel, by the way.) Anyway, so Dottie seems like a stereotypical lesbian and Mo’s dad seems like stereotypical gay man, and they’re getting divorced, but then they don’t because they’re actually straight, and Charmaine still hasn’t done any queer thing. 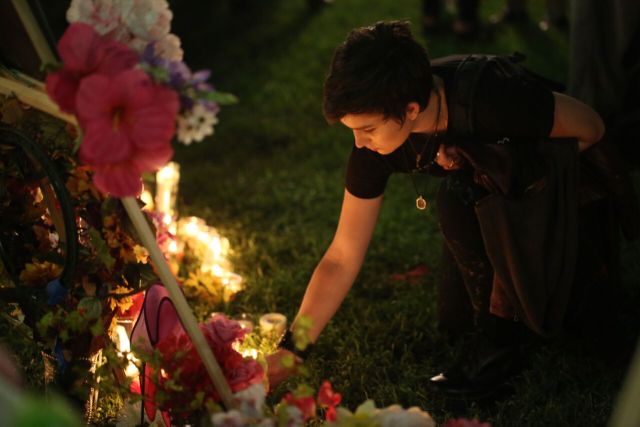 Keep holding your breath, Emma. The Grunwald will be here soon.

Audrey consoles her future girlfriend, Emma, this week as she dealt with the fallout from her own sex tape getting leaked onto the internet. Will spends the episode trying to convince Emma he didn’t film their first time together, and also he spends the episode getting his ass beaten down. In gym class, it’s self-defense day, and Audrey pins him to the ground before the instructor even says go. Emma and Audrey get even more gal pal-y at a memorial service for Nina, Tyler, and Riley — which means they’re totally going to fall in love, and then it’s going to come to light that Audrey’s the one who released Emma’s sex tape! Or one of them is going to die! Or they’re both going to die! Or one of them is the killer!

Don’t get your heart involved, is what I am saying. 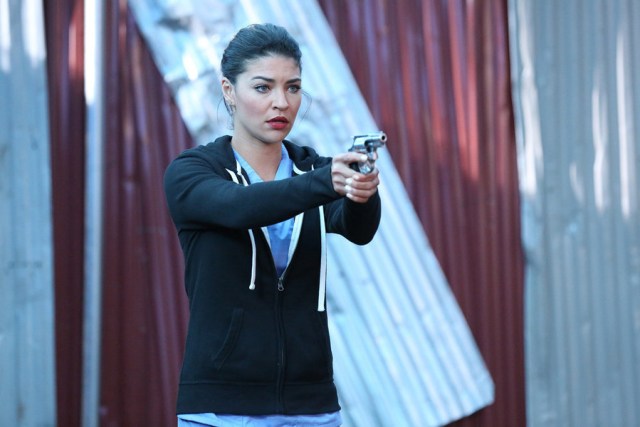 Put up your hands and step away from the Nokia 5160, Humphrey.

Gretchen is my summer hero, y’all. No one else is going to be able to come close. This week, she saved Jed’s life by forcing him to get sober and by taking him to the hospital for vigilante treatment during one of his benders when he fell right on his face and busted it up. Gretchen also saved John’s life by smashing his car window and pulling his gun from his doctor bag(!) and getting into a high noon showdown with the gang members who were beating the shit out of him to keep him from explaining the plot of this show to anyone in authority.

The ratings are pretty solid. They’ve held strong this summer. USA will probably cast its renewal net around it really soon. 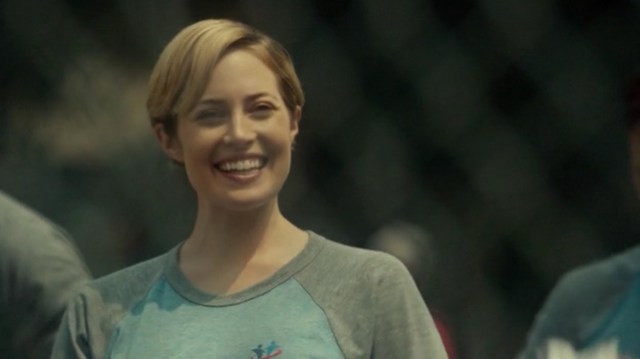 Did someone say Quinn Fabray?

I only started watching Rookie Blue for Gail and Holly’s storyline last season, but I have fallen in forever love with Gail Peck. She’s trying to adopt Sophie, as you know, so this week she meets with the family services person who is evaluating her. She decides to help out with a community softball game to show the social worker how good she is with kids, but it kind of backfires because she turns out to be super awkward with the kids — until there’s a drive-by shooting and she flips the switch to hero mode and saves some lives! At the end of the day, she gets to hang out with Sophie for a little while. Sophie who knows and loves her for the true hero she is. I prefer puppies to children (and dogs to adult humans), but Sophie is wonderful. I hope we get to keep her. 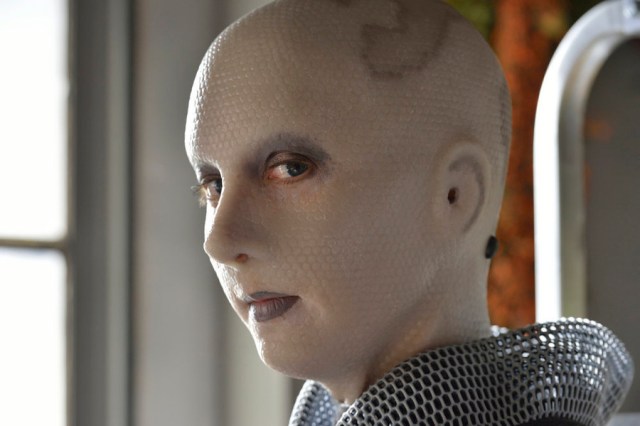 Doc Yewll died on Defiance this week! Ripped to shreds! But actually it was only a clone of Doc Yewll! Kindzi is making clones of her and hunting them for sport. Weirdly, when Yewll finds out, it kind of turns her on? I mean, her wife also was a hardcore Slytherin, so at least her type is consistent, but YIKES. T’evgin finds Kindzi in her evil lair and yells at her about blah blah whatever I’m The King And We’re Good Aliens Now, but before he does that, Kindzi manages to stick some kind of mind-controlling device into Yewll’s head, so that’s going to end in a bloodbath for sure. 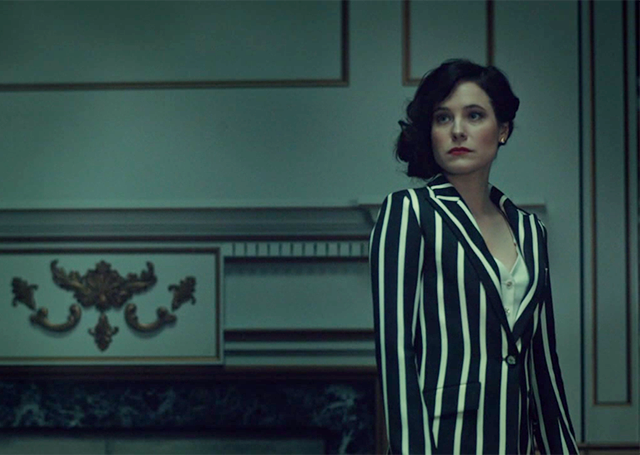 Remember last week when I told you that Hannibal time-jumped three years? Well, it turns out Margot and Alana have been together the whole time, and they have a baby! Alana carried the baby — due to Margot’s ovaries being cut out by her brother last season, I think, before she fed him to the eels who lived in his floor — and it’s from Margot’s brother’s sperm. Now, they have an air to their pig farm! (I think.)

So Alana is working at the psychiatric facility where Hannibal is being held because she says there’s only five keys separating Hannibal from the outside world, and she’s got all of them in her pocket. She tells Hannibal this while also threatening to take away all his nice things if he doesn’t stop being a jerk to his boyfriend, Will.

“Did you come to wag your finger at me?” is what he says.

“I love a good finger-wagging,” is what she says.

That’s the story as told to me by Stacy and also by Stef. #FingerWagging 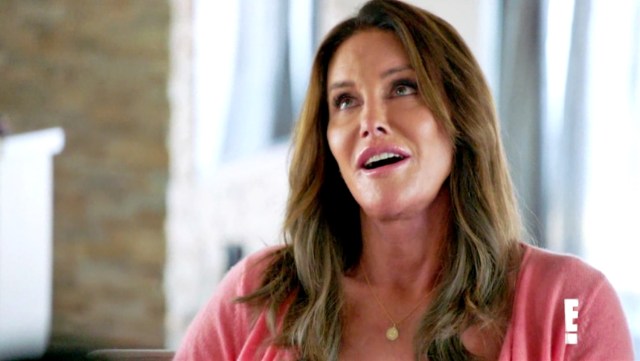 I expected the second episode of I Am Cait to be much more Kardashian-y than first one, just sort of lighthearted and focused on fashion and living life in Malibu, so I was shocked when it dove right into the dissonance caused by someone as privileged as Caitlyn Jenner being thrust into the spotlight by much of the mainstream media as the face and voice of the trans movement. In an op-ed in People this week, Caitlyn said: “To those of you who have asked me for my opinion or expertise, I want to remind you that while I’ve know that I was trans since I was a small child, learning about the trans community is still very new to me, and I don’t have all the answers.”

And that’s the theme of the second episode of the show. Jenner takes a luxury RV ride up to the San Francisco Human Rights Campaign’s office with a group of trans women, including GLAAD’s Jenny Boylan, and it only takes a few minutes of discussion before Jenner’s conservative politics and privilege enter the conversation and highlight how living in a rich, white bubble has colored her view of the tough reality so many trans people face. Like so many Conservatives, Jenner has bought into the lie that people only need welfare if they’re not willing to work. That’s categorically untrue, and a belief that is hugely damaging because trans people suffer a disproportionate amount of unemployment and homelessness.

This exchange was the crux of the conversation.

Caitlyn: A lot of times, they can make more not working with social programs than they actually can with an entry-level job.
Jenny: I’d say the great majority of people who are getting help are getting help because they need help.
Caitlyn: But you don’t want people to get totally dependent on it. That’s when they get into trouble. ‘Why should I work? You know, I’ve got a few bucks, I’ve got my room paid for.

Another reality show would have cut away to commercial with some dramatic music, but E! actually cut to a confessional with Jenny Boylan, who said:

“Now I’m worried. Caitlyn has every right to be just as conservative as she chooses, but many transgender men and women need social programs to survive and that’s nothing to be ashamed of. Living in the bubble is an impediment to understanding other people. If Cait’s going to be a spokesperson for our community, this is something she’s going to have to understand.”

In another confessional, one of the trans women Caitlyn is meeting with says:

“Cait thinks that because she read a couple of pages in [Janet Mock’s] book that she’s in the know, but she doesn’t get it. She doesn’t realize how common sex work stories are. She could never understand how it would feel to walk in those shoes. If she’s going to be our representative, Cait needs to learn the struggle we all face.”

By showing Caitlyn’s missteps and allowing trans folks to correct them, E! is also correcting a lot of common misconceptions held by their audience, most of whom probably wouldn’t have taken the time to educate themselves about the needs and struggles of the trans community otherwise. It’s pretty surprising to me that they’ve taken this route, but I’m glad.

It’s Gal Pal Week on Autostraddle.com! Let’s kick it off by counting down television friendships we adore!

Willow and Tara in love (and alive) forever!

Aria asks Emily to prom and she says no!

She knows who killed Jenny Schecter.

Leanne’s Amish roots come to light as she hammers out the tenants of Normaism, a rabbi arrives to test Jewish Black Cindy and the others about their newfound Jewish faith, and Suzanne’s legion of admirers grows.

Starting next week, I’ll be covering Carmilla in this column, and thanks to your input last week, I’ll add Steven Universe to the line-up!

Heather has written 1002 articles for us.